Life Miniatures latest release, Sea Wolf, arrived in the stunning packaging as usual. The parts nestled between layers of shaped foam with the smaller parts held in ziplock bags beneath. The glossy sleeve to the box is adorned with the box art of Sang-Eon Lee with images of the unpainted bust along one of the sleeve sides. 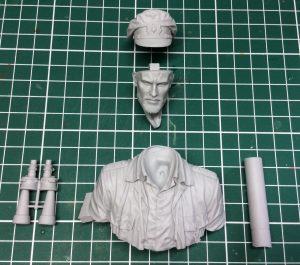 This is a 1/10 scale polyurethane resin kit, comprising of just four parts and a turned pedestal. It is traditionally sculpted by Sang-Eon Lee himself and as always it is a work of Art and represents the pinnacle of what is possible in our hobby!

September 1939 is etched in everyone’s minds as the date that Germany invaded Poland and following the declaration of war by France and Britain, World War II began. Prior to this there was a chain of events during the inter war years that need reviewing, so as to develop our story of the U-boat commanders. 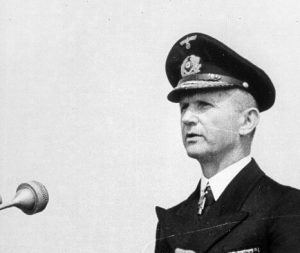 Karl Donitz was born near Berlin in 1891 and at the age of 19 enlisted in the Imperial Navy (Kaiserliche Marine). In 1913 he was commissioned to Leutnant zur See (acting sub lieutenant). A career during WWI saw him climb the ladder until he became Commander of Ub-68 operating within the Mediterranean. On 4th October 1918 was taken prisoner on the Island of Malta when his boat was sunk following engineering technicalities. He was released in July 1919 and returned to Germany the following year.

During the interwar years he continued his naval career becoming lieutenant commander of a torpedo boat in 1928. Further promotions saw him command boat flotillas as naval Captain in 1935.

British Intelligence in particular ASDIC (Anti Submarine Division) devised the first ever practical underwater active sound detection apparatus. However, its effectiveness was hamstrung by depth charge as a submarine weapon and a lot of this activity was a ruse.

This bluff however, gave the German Navy and in particular Donitz, misgivings regarding submarine capabilities, propaganda at it’s finest. 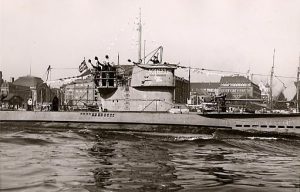 U-48 (type VII) most successful submarine ever commissioned

A change was to be implemented that would bring about the creation of the “Sea Wolves”. Naval doctrines across the globe, including those of the Germans, was to deploy submarines in conjunction with surface fleets to engage enemy warships. In 1937 Donitz however, was convinced that a fleet of 300 of the newer Type VII U-boats could knock Britain out of the War if they attacked easy and strategical targets such as merchant ships and oil tankers.

Donitz revived the idea of grouping submarines together into what the British described as “Wolfpacks”; rudeltaktik a term that translates roughly to “tactics” of a “pack”. The U-boat movements were controlled by the Befehlshaber der Unterseeboote BdU (Commander of Submarines) and unlike Allie submarines, usually patrolled on their own, in strung out lines, generally across convoy routes.

U-boat commanders commonly referred to as Sea Wolves, because of the terminology of submarine tactics, would often be given a probable number of U-boats in the area that would have sufficient time to respond. When they made contact with a convoy, an attack would be coordinated if they believed their numbers were sufficient to result in a positive outcome. 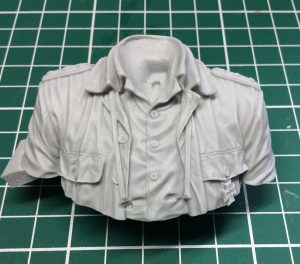 Torso showing all those crisp details

The Kriegsmarine was far outnumbered by the British Royal Navy and other officers at the time believed that a war effort at that time was futile. They believed they had to continue with their “Z plan”, to continue to expand Germany’s surface fleet so that it may effectively engage enemy fleets. However, the plan was proposed to come to fruition by 1945, six years after the unexpected breakout of WWII.

Donitz meanwhile was proactive in his belief and put his U-boat crews through intensive training, entrenched in his beliefs and doctrines. When War broke out, the surface fleet was totally inferior and meant submarine warfare was Germany’s most effective naval option.

When America joined the War in 1941, German submarines were sent to attack merchant ships along the East coast of North America in Operation Drumbeat. During 7 months in 1942, nicknamed “American Shooting Season” by the Germans, the U-boats sank 609 ships totalling 3.1 million tons of shipping and lost a mere 22 submarines. This successfully hindered trade and resupply of materials necessary for the War effort. In total these Sea Wolves, manned over a thousand U-boats during WWII, destroying almost three thousand ships and sinking over 14 million tons of Allied shipping.

The main piece, the torso, shows our commander in an open necked shirt and jacket. I read that the Kriegsmarine uniforms followed the design of the preexisting Reichsmarine and had many features in common with those of other European navies. Uboat.net state that Kapitan zur See (Captain) wore undress uniform (Kleiner Dienstanzug) with peaked cap. 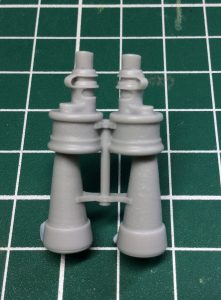 The simple design of the binoculars

It is also mentioned that whilst on active service, due to the cramped and humid conditions, dress code could be relaxed and civilian clothing worn. It was also common for crew to wear captured British battle dress, large quantities of stock were taken at Dunkirk, although eventually the Germans manufactured their own in similar styling.

The box art shows a chequered shirt which I believe may be civilian attire mixed with the more expected military jacket, with epaulettes showing his pips of rank (Captain).

The detailing is exquisite, the double breasted jacket has nice seams to the shoulders with buttoned pockets. There is nice trimming to the pocket flap and stitching around the button holes.

The creases and folds are nice, natural looking and not over worked. Kriegsmarine staff were eligible for the same honours and awards as other members of their fighting forces and attached via the pocket button we have the Knights Cross. 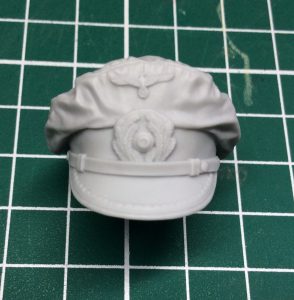 Coming from under the collar and running down either side of the jacket we have the leather strap for the field binoculars, showing sharp undercuts. Just below the strap we have two dimples in the cast to house the small nubs on the binoculars to ensure everything lines up perfectly. The binoculars themselves are nicely detailed and historically accurate.

Moving onto the cap, this is a commanders peaked cap with the elasticated cover, the box art correctly depicting it as white, to represent the commander of the U-boat. The cap is accurately detailed with correct trims, straps, insignia and badges. The wrinkling to the cover is realistic. Inside the cap is a socket to receive the peg on the top of the head.

The head itself depicts a rather handsome, young commander. I spoke with Sang-Eon Lee personally and was informed the kit is merely a fictional character although in my opinion it does bare a resemblance to Horst Wilhem Kesler.

The facial features are incredible, hawk-nosed, hooded eyed with a slight smirk to the mouth line. There is evidence of a slight frown and the hair and beard are nicely rendered. 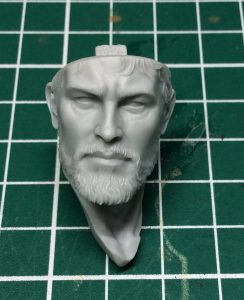 The cast, once more is also done by Sang-Eon himself and is flawless. There are casting plugs to the torso and cap that will need removing and filing smooth, then you’re ready to go,once the parts have been washed in some soapy water.

The fit of the head to the torso is perfect with no need for gap filling, the same for cap and binoculars too. There are nod effects such as slippages, moldlines or air bubble holes. This is a simple kit to build than previous releases but no less impressive throughout.

The bust is of the traditional variety, mainly head and shoulders, head slightly inclined and looking to his right. This little attention to detail coupled with his expression helps to make the piece more atmospheric and portrays our Commander as determined and thoughtful, capturing the tense atmosphere of the confines of a submarine.

Life Miniatures continue to discover interesting subjects and producing busts of an incredible standard and each seems to fill a niche within the hobby that until now was missing.

People with an historical, military or a particular interest in service personnel of the Reich will adore this piece. In fact anyone with an interest in figure painting cannot deny the unbelievable level that Life Miniatures keep producing with their range. In addition the assembly of this piece is far simpler to their other releases and so this could be a great bust to start with to cut your teeth upon. The detailing, cast, sculpt, design, presentation etc are all of the very highest standard and I believe this kit is very desirable, not only to figure painters but collectors too.

When I consider all of the elements I have discussed above and compare that to some of the figures being released by other companies, the £40 price tag seems utterly unbelievable. Highly recommended!

Where Can I Get It?        MULTIPLE STOCKISTS AND DISTRIBUTORS