My collaboration with Aradia Miniatures continues with the beautiful Queen, sculpted by Ali Jalali in 70mm scale. It was released at the Scale Model Challenge last month and continues to expand their fantasy range. It arrived in a solid, hand crafted wooden box, adorned with the boxart by Mirko Cavalloni and consists of eleven polyurethane parts. The box also sports a pyrographed glyph.

She is the companies interpretation of Aradia, an Etruscan goddess, queen of the witches and keeper of the ancient cults of the old pagan religion survived despite the repression of the church. The figure of Aradia was rediscovered during the 19th century by an american journalist and folklorist, Charles Godfrey Leland, who came in contact with an ancient coven of women during travels in Tuscany, Italy, where the cult of Aradia – he said – had secretly survived until the 14th century. 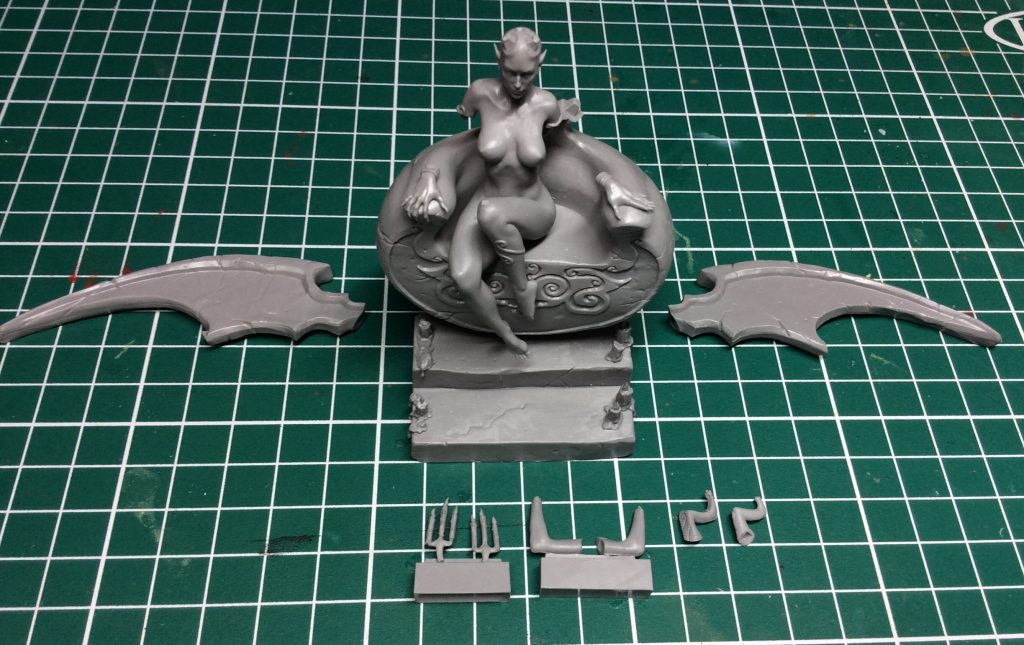 When I spoke with team about this release they gave me some insight into it’s concept.

As you can see there is a lot of symbology, the design is not random.

As you know, our company name Aradia is representative of the fairy and pagan world of myths, legends and folklore from which we take inspiration for our characters, now is time to release the figure of Aradia (often requested by our customers during last years)”.

“The great god Pan is dead!” This was the voice that was echoing through the streets and countryside centuries ago, while the new religion arose and the spirits of nature retreated in secluded and lonely places.

A great change was taking place: all that until then was worship and tradition, was to become a “work of the evil one,” according to the new vision of the nascent religion.

The traces of the ancient pagan tradition (from the Latin “pagus”, “of the fields” or “from the countrysides” and “rustic village”, since this tradition survived especially in rural areas with minimal contamination) were to be gradually removed or revised by the new cult. 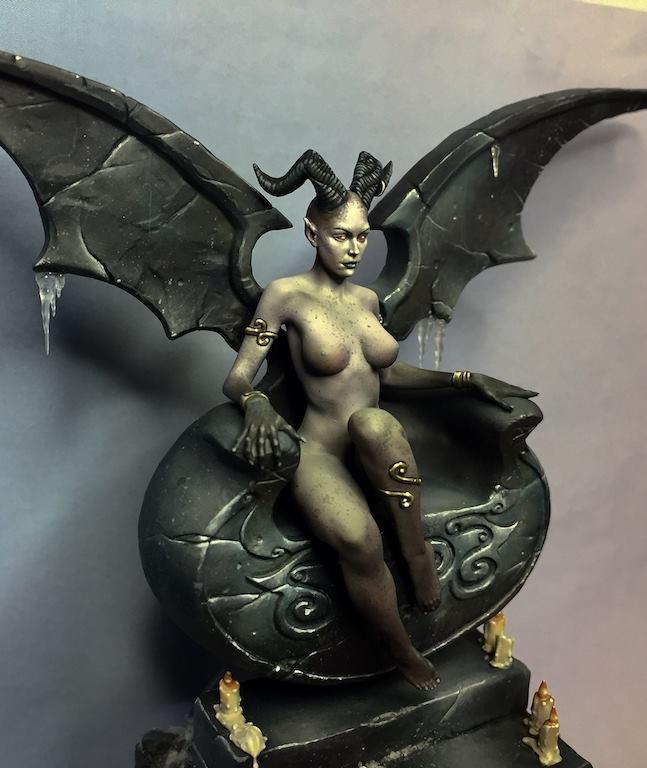 A wonderful version by Robert Carllson

Together with them, even the ancient Gods hid themselves. However, Diana, goddess of the wild woods, before disappearing forever, gave birth to a daughter, Aradia, which would have preserved the fire of the Tradition during the following centuries, teaching the millenarian knowledge, heritage of their race, women and men who had managed to make contact with her.

During those centuries, Aradia lived in the heart of Europe’s forests, still pristine, often moving with her small court of fairy creatures to avoid being discovered by the exponents of the new religion.

So, in clearings in the woods, or on top of rugged mountains difficult to reach by humans, they  celebrated festivals and rituals in honour of the Goddess Aradia and of the magical knowledge of which she was the bearer. Shortly before sunset, all creatures gathered in a circle to hear stories of ancient mysteries or enchanted fairy tales. Most of the time was the toad Bufo Bufo who entertained the audience with his stories until after sundown; other times it was the same goddess, from her stone throne, handed out stories and teachings to all her little people. Often the evenings continued with abundant banquets and music and dancing until dawn.

It is said that only very few men and women were received secretly in the kingdom that for many was legend, for others had never existed. In this way, Aradia fulfilled the mission for which she was born, namely to preserve the ancient teachings of his lineage and deliver them to those who were worthy, thus maintaining an underground traditions between the world of ancient paganism of her ancestors and that of the future.

Women and men who were initiated into the cult of Aradia were called “witches” and “wizards” by those who did not belong to the cult and were described as evil beings from the new religious leaders, so as to persecute them for centuries”. 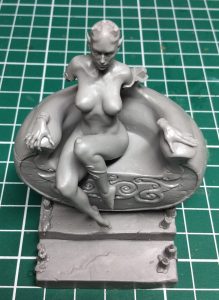 When this first arrived, the candle flames and finger tips to the queen were all damaged or snapped, a quick message to the guys and my replacement parts were on their way. This is something  that I have always admired about Aradia, their customer service is second to none!

Lets have a look at the various parts now beginning with the throne and steps scenic base. Firstly we have the two steps which are nicely moulded if a little plain. You could easily add more texture or damage/wear and tear if you so wish and the lit candles are a nice touch with molten wax pooling at the foot of each.

The steps attach to the foot of the throne via a peg and hole assembly, fit is tight with no need to gap fill. The throne looks as if it is carved straight from a lump of Onyx or some cold surfaced stone, with nice engraved patterning to the front surface. There are two wings that require attaching at the back of the throne, raised high and out to the side of our seated Queen, framing her nicely. 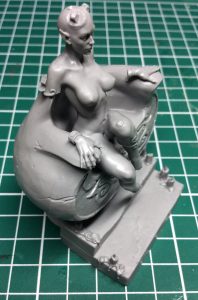 Next we have Aradia herself. She sits on the throne, upon a square locator peg. Her left and right arms need attaching at her shoulders and then sit into the wrists of her hands which are sculpted upon the curved arms of the throne. The fingers of the hands are slender and delicate. She is lithe and seductive in her pose, legs raised a little off the floor, with a slight twist. She reminds me the various “daemonettes” we have seen over the years through GW, Alan Carrasco etc etc.

The anatomy is wonderful, accurate muscle groups, nude but not offensive, beautiful but threatening, the conflicting nature of her character, her heritage, her history is perfectly displayed in the sculpt. Her head is held high, noble and proud, her facial features are delicate, almost elven in their appearance, especially the pointed ears. There are torques sculpted to her upper arms so that when the lower arm is attached the join is hidden.

Upon the head we have the pins to accept the horns. Upon the tops of the horns we also have candelabras that can be attached although I have seen some versions where these have been left off. The detailing throughout these small details is very nice although care will be needed when removing them from their resin sprues.

The cast is very good although there are some mold lines that need removing, in particular along the throne and down the back of  her right leg.There are some nubs of resin that also need removing, for instance top of the head, on her left knee and on the throne wings. There are no major defects such as air bubble holes or casting slippages. Preparation should be straight forward, some of the parts may be tricky to align and remember to wash with soapy water to remove any grease or casting residues prior to priming.

The design of the figure and throne is well considered and the composition is nicely balanced, the wings framing Aradia nicely. Queen of the witches, Aradia, is a slender and graceful miniature that will benefit from a smooth, subtle paint scheme and perfectly captures the ideals of the figure company. The concept for her was well thought out and her background story should provide the painter with enough inspiration to create their own versions. I think it is a particularly original idea and is a welcome addition to their fantasy range. 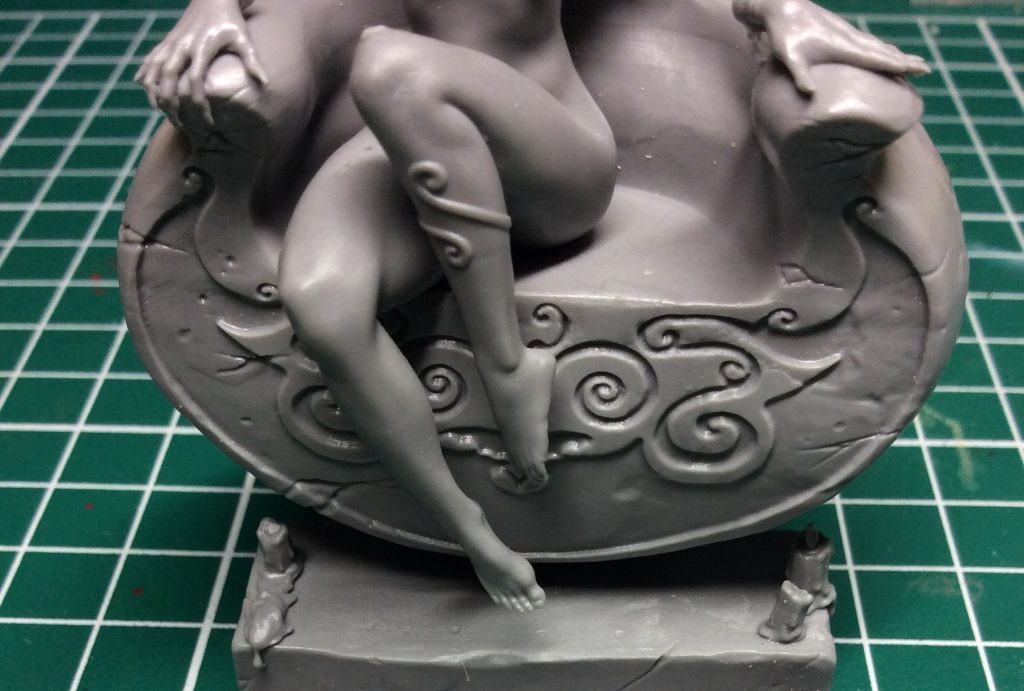 close up of the details

Aradia Miniatures continue to create a fantastical catalogue of intriguing characters and creatures. Their collaborations with some of the very best concept artist and sculptors ensures that each new release is warmly received and highly sought after. Aradia Miniatures are here for the long haul and I look forward to seeing what else they have in store for us.

At just €55 I think this figure is competitively priced and the attractive wooden box makes it a collectors piece, in addition to that the box could be used as a plinth for your own version of Queen of the Witches.