I have always realised that the busts from Young Miniatures were of a high quality but I never realised just how good they were! My interest in historical subjects has grown in recent months and with it my admiration for these sculpts. The kit arrived in a stunning box, there is a clear plastic sleeve that slides around the box. The lid to the box lifts off, adorned with the box art by Kirill Kanaev, the sides of the box depict box arts of the other busts in their catalogue.

The kit, sculpted by Young B Song is a 1/10 scale bust, consisting of five, beige coloured polyurethane resin parts, the smaller ones held in a ziplock bag, everything nestled between thick layers of foam. First impressions are stunning! 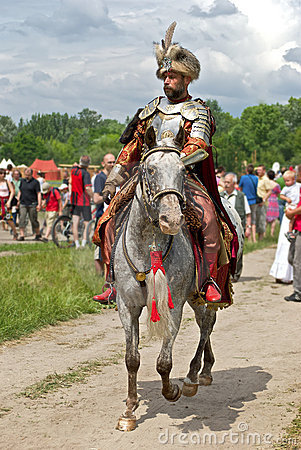 You can read the general history I researched previously HERE, so I will just provide a more specific look at the nobility of the Polish Hussars. I believe this particular subject is from the 16th century and the vast majority of the hussars were recruited from the Polish nobility, otherwise known as Szlachta.

Regardless of their wealth all nobles held the same social status and it was often quoted “Szlachcic na zagrodzie, równy wojewodzie“, the meaning behind this is something along the lines of “a noble owning a farm stands equal to the noble army commander”.

The Szlachta were a legally privileged noble class, gaining institutional privileges from 1333, beginning with the reign of Casimir III the Great (1310-1370), right up until its abolishment in 1921. As the Polish-Lithuanian Commonwealth (1569–1795) evolved and expanded it’s territories, so its membership grew to include the leaders of Ducal Prussia, Podolian and Ruthenian lands.

The Szlachta origins are obscured through history and have been the subject of a variety of theories and research programmes. Historically, Hussar nobles were owners of landed property, often in the form of farms (folwarks). 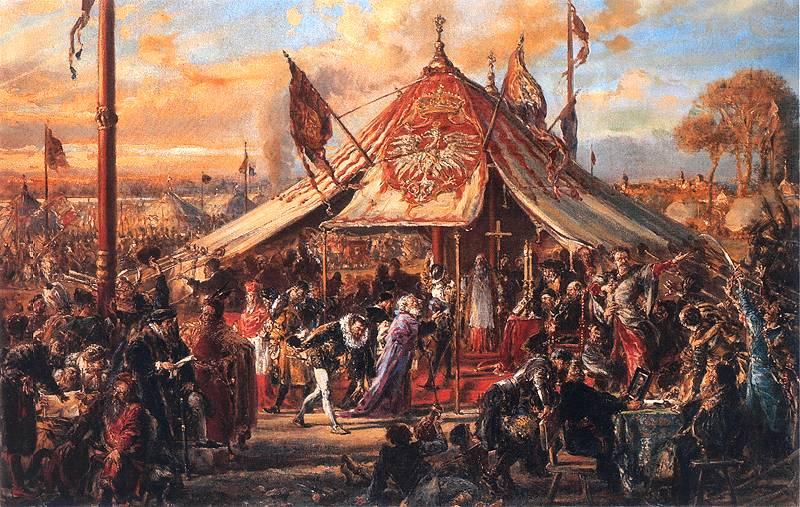 The Commonwealth’s Power at Its Zenith, Golden Liberty, the Election of 1573 by Jan Matejko

The nobility continuously negotiated over the years, increasing political and legal privileges for themselves, until their standing began to decline along with that of the Polish Commonwealth in the late 18th century. During the inter war period, Poland became known as the Second Polish Republic, and through the March Constitution, discrimination on racial or religious beliefs was abolished along with all royal titles and the institutional privileges of nobility.

The bust is of the traditional type, consisting predominantly of head and shoulders and consists of the torso, head, hat, feather and powder horn. The pedestal is nicely turned with a square base which will look really nice once added to a square plinth. 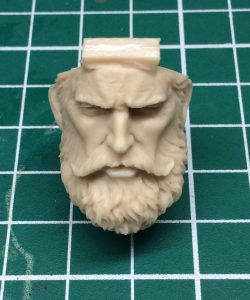 such an enigmatic facial sculpt

The face itself is particularly expressive, wrinkled brow caused by a discerning frown, eyes hooded with hawk nose and a slight twist of the full lips. The large moustache and beard so popular of the time is expertly rendered. The head definitely depicts a nobleman of middle age with an air of importance and high social standing.

The head is cut at a slope to accept the fur cap known as a Kolpak, the textures and detailing are second to none, the cap badge sits front and centre and just above it there is a hole to attach the feathers. The central seam to the top of the cap is another clue to the sculptors attention to detail. 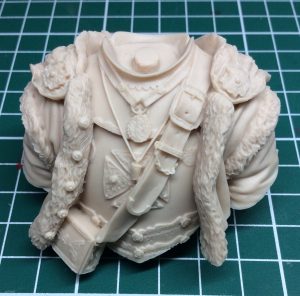 The only other piece to attach is the finely detailed powder horn which is to be carefully glued to the small length of chain around the chest strap. The main piece, the torso, is exquisitely sculpted with a wealth of ornate detailing showcasing the trappings of a privileged nobleman.

The cuirass is beautiful, adorned with the knights cross and what looks like the cartouche of the Virgin Mary as a medallion around the neck. Usually the cartouche would be sculpted to the burnished armour. Over the cuirass is worn the Dolman, a fur lined coat. This one seems to have fur trimmed, short sleeves with an undershirt beneath. The coat is well detailed, the fur is nicely rendered, with silver buttons and hoops to draw the coat closed.

Attached at the lapels we have the animal pelt that falls down his back. This is another clue to the date of this hussar as pelts were worn in this fashion from the 16th century onward. Pelts were usually leopard, tiger and lion whilst pelts of bear and wolf would be reserved for leaders. The fur is accurately and subtly sculpted with nice, natural looking folds and individual clumps are shown. 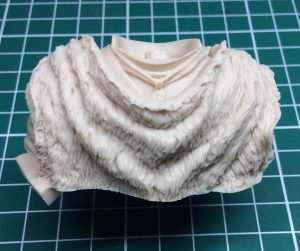 nice folds and texturing to the pelt

At the end of the strap that lies diagonal across the chestplate/cuirass we have the hussars pouch with embossed detailing, the ends of the straps show metal endings. All of the detailing throughout is accurate, crisp and beautifully rendered with sharp undercuts to embossed details, straps and chains.

The cast is flawless, the only preparation prior to assembly will be to remove the casting blocks, file smooth and wash with soapy water. There are no defects minor or major throughout the whole sculpt. This is a bust of the highest quality both in sculpt and cast.

The design of this bust is the classical type displaying predominantly head and shoulders, the head is slightly inclined and to his left, exaggerating his facial expression and standing. There is nothing to the sculpt to create an unbalance to any of the elements and the bust casts a nice silhouette. Polish hussars are a very popular subject for the historical figure painter however, it is nice to see a different version to the heavily armoured, winged hussars. 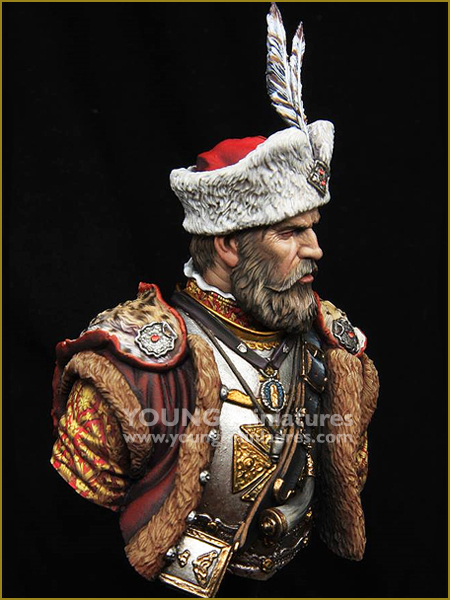 another angle of the incredible box art by Kirill Kanaev

The kits from Young Miniatures are always well received in the community, the quality of the sculpt, detailing, casting, presentation of the subject means that each kit is classed as a high end product and as such is highly desirable. A lot of their busts consist of a minimum amount of parts making assembly easy and straight forward, another reason not to be put off taking the plunge into painting one of these incredible busts. 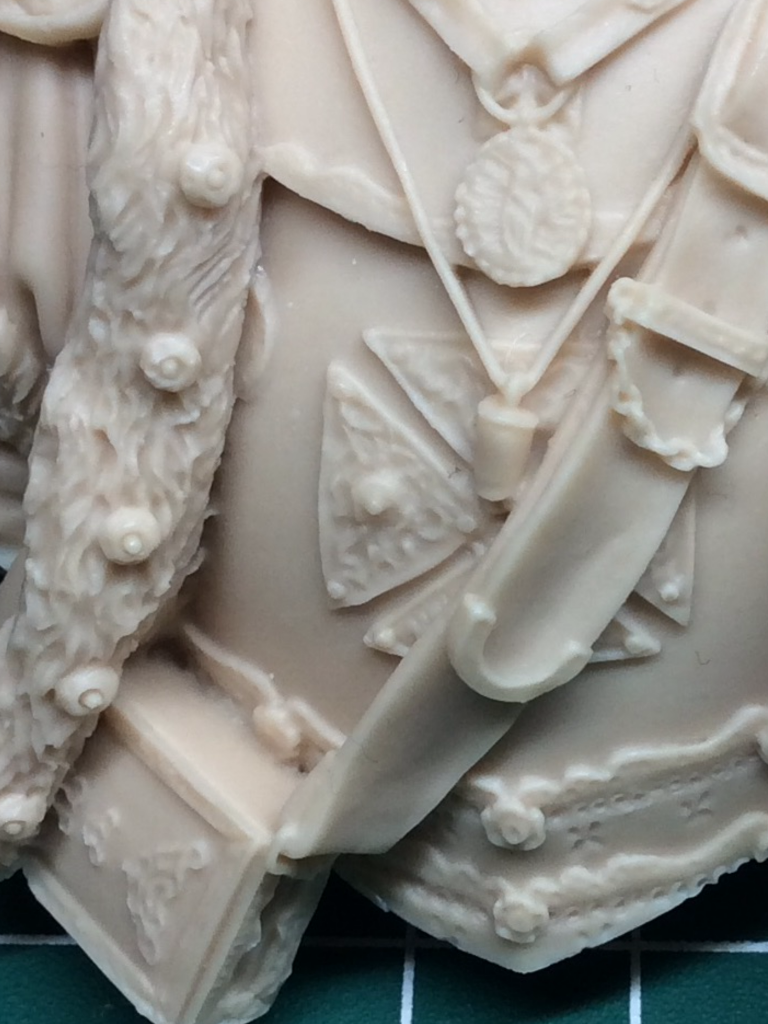 gratuitous close up of all that incredible detailing

It seems that there is currently no shop on the Young Miniatures website, purchase is made via email or for us U.K. customers via Historex Agents or El Greco Miniatures. Curiously I could not find the price on the YM site either however, both of the stockists I list sell it for £46 which in my opinion is an incredibly good price.