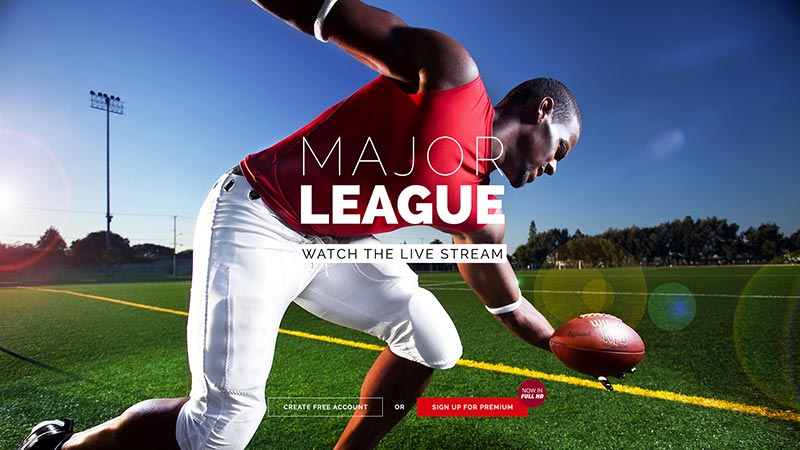 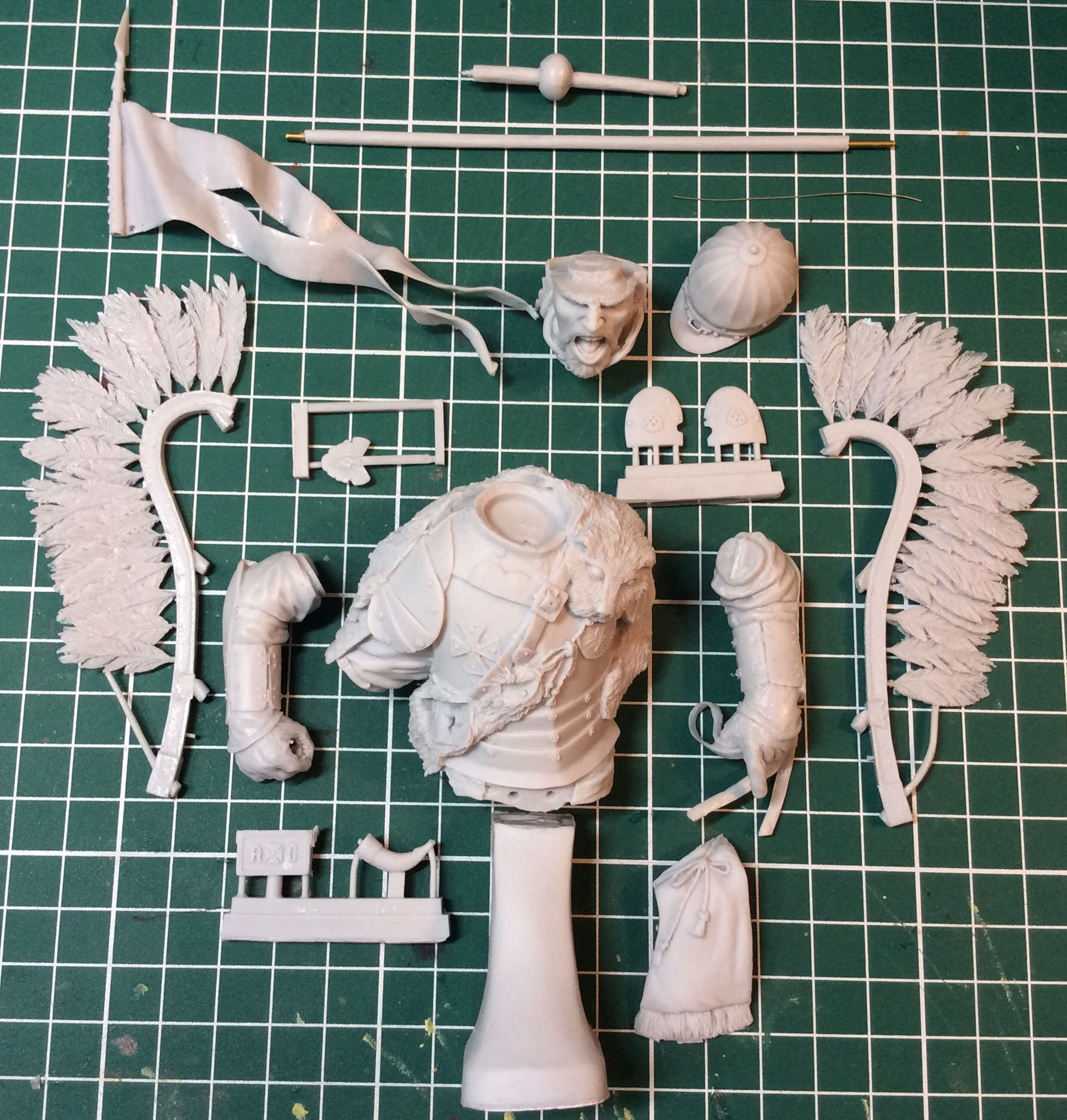 This kit is a collaborative effort between DG Artwork and MJ Miniatures. This is a traditionally sculpted historical kit of some considerable interest, by Dae Hyoung Kim. It arrived in a sturdy black box adorned with the boxart painted by Man Jin Kim himself. Inside we find a total of seven ziplock bags containing 16 resin parts, a length of thin copper wire (for the powder horn I believe) and the nicely formed pedestal. It’s all wrapped up in a large bubble wrap bag. First impressions are quite daunting as there are a lot of parts and it seems this may become a complex project however, on closer inspection everything seems quite self explanatory and the dry fit of the parts is very good.

The Polish Hussars otherwise known as the Winged Hussars, for obvious reasons, were an integral cavalry type in the Polish-Lithuanian Commonwealth during the 16-18th centuries, through various incarnations. They began as light cavalry mercenaries but by the late 16th century they evolved into the heavily armoured shock cavalry that for another century were considered the elite of Polish Cavalry.

The units (banners) of Hussars pre-date even the 16th century with the Hungarian Hussar seeing conflict against the House of Habsburg, Bohemia and the Ottoman Empire during the reign of King Matthias Corvinus during the 15th century. 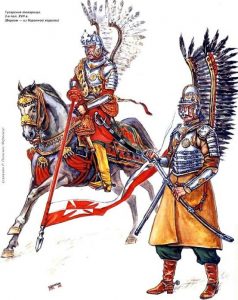 In 1503 the first units of Polish Hussars were formed by Polish Parliament (Sehm) who hired three banners of Hungarian Mercenaries shortly after, recruitment of Polish citizens also began. These early Hussars played minor roles in battles at Orsza (1514) and Obertyn (1531) and so began a transitional period where the light lancers were replaced by the more heavily armoured Hussars.

As hinted at earlier the true “Winged Hussar” arrived following reforms of King Stephen Bathory circa 1570 and became the elite, legendary branch of cavalry in the Polish army until 1776, where their various duties were passed by parliamentary decree to the Uhlans.

The evolution of the cavalry saw them drop their wooden shields and develop metal plated armour during the course of the 16th century. In addition, Bathory reorganised the Hussars in his Royal Guard to form a heavily armoured unit with long lances. In many battles during the 17th century the Husaria became the deciding factor. Even during the Polish-Muscovite War, the Russians outnumbered the Commonwealth Army 5:1 yet were still heavily defeated due to the thundering cavalry and their oversized lances rendering many fighting units useless! 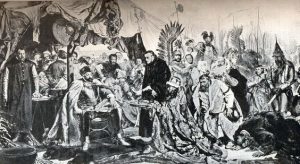 Their primary tactic was the charge. The charge started slow and in loose formation, the pace would quicken and the formation would grow tighter and tighter, so that at the point of impact the charge and formation was at its fastest and tightest! Surprisingly the Hussars had several weapons at their disposal, carrying most if not all of the following: the lance, stabbing sword (koncerz), a sabre (Sztarbała), pistols and sometimes even a carbine (bandolet). Other weapons they may have carried included a broadsword (palasz) and a reflex bow.

Each companion (Towarzysz husarski) commanded his own poczet consisting of two to five similarly armed retainers and servants (czeladnicy) who tended to all the companions needs and often took part in battle too; thus forming a larger unit known as a “banner”. The Hussars were expected to provide the armour and weapons themselves, however most lances were provided by the King. Let’s discuss the armour and weapons in more detail now as part of the actual kit review.

The sculpt is an instant classic in my opinion, the snarling visage of the hussar perfectly capturing the moment at the start of a charge into enemy ranks. The detailing and historical accuracy is spot on as we will discover once I start discussing individual elements. The casting is very good too although there are several things that will require some attention. There are remnants of casting plugs on most of the larger parts i.e. torso, arms, head etc. The pedestal may need a little gap filling when bust is attached and the lance will need pinning to make it more secure. There are some very slight moldlines but nothing that would deface any details or require anything other than careful removal with a scalpel blade. There are no other defects in the resin such as air bubble holes. 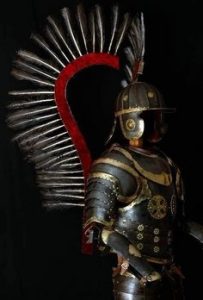 The Hussars heavy but flexible armour

The kit depicts the hussar at its height of prowess and success as a troop. As such their armour is that worn between late 16th and mid 17th centuries. The helmet consists of the hemispherical skull, western styled cheek pieces, neck guard and adjustable nasal guard, a polish variant of the szyszak (oriental-Turkish origin). At the front of the helm, above the peak there is a slot to receive the heart shaped nasal guard. The cheek guards are studded and sculpted with the heart shape detailing to their centres. The rivet plated neck guard is sculpted to the back of the head and when the helm is dry fitted, it fits nice and snug, no need for gap filling.

The head is nicely sculpted, snarling and expressive, with fine details and slots either side to accommodate the cheek pieces and has a natural fit to the torso, twisted slightly to the left.

The cuirass (breastplate), back plate, forget and shoulder guard armour including the scalloped upper arm armour are all nicely detailed. The various buckles and straps are crisply rendered with nice undercuts and decorated on each side of the breast with cross and polish eagle decorations. Draped over his left shoulder is an exotic leopard pelt, the folds and creases are realistic and the clumps of fur are finely rendered. Pelts of bear and wolf would be reserved for leaders. The pelt ends are held together by the use of a cord, there’s nice tension to the tied ends of cord and the loops and excess have nice sag and movement to them. There is a slot to attach the pouch at the end of the belt length that goes across the torso and the monogram letters and cross are further good examples of the attention to detail and historical accuracy as is the powder horn. 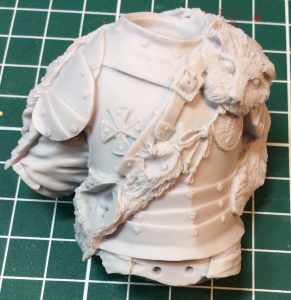 The arms are protected by vambraces, although I am not sure of the type depicted with the kit. The creases to the uniform protruding from beneath the various elements of armour, is another realistic detail indicating that the cloth is being cinched.

The left arm is sculpted to accommodate the long lance and some flash will need removing to allow the lance to fit, the right hand is wrapped by the reins, again the sag and movement of the reins is a nice touch. The sash fits nicely to the cut at the base of the torso with a nice flow to the cloth and crisp detailing to the cords and the tassels along the bottom edge.

Lets take a look at the lance (Kopia) is presented in the kit in three pieces, the main haft, the large hand guard ball known as the galka and the large silk pennon (proporzec). The largest piece of the lance has a metal rod passing through it for extra stability, negating any corrective treatment of warped resin, and with a little drilling and pinning the parts should come together nicely.

In real life the lances were hollow centred, usually two halves glued together, made from Fir and ornately decorated. The hollow lances were thus very lightweight despite their incredible lengths and were purposefully designed to shatter on impact as the cavalry smashed through enemy ranks. 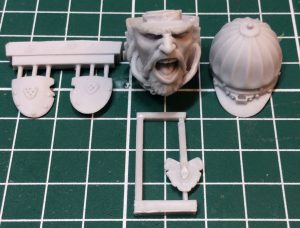 The snarling head and the various helm elements

The lances point was made from forged steel and just below this the pennon. The point and pennon of the kit are nicely detailed, and the pennon has nice ripples and folds to it. There are none of the other weapons discussed earlier present with the kit.

There are several theories regarding why the hussars carried these wings; the two most believable being a) they created an impressive and intimidating sight for the enemy during the charge and b) the noise the wings made (wind passing through them) was designed to deafen the horses to the enemies attempts at unnerving them by bashing weapons against shields and other such tactics. 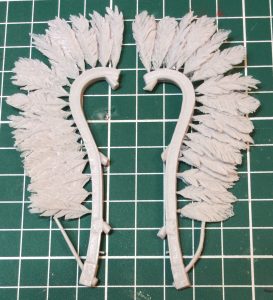 All that’s left is to fit it all together and mount to the resin plinth.

In my opinion this is a wonderful kit, full of details and a variety of different elements, skin, steel, pelt, wood, leather etc that should make for an enjoyable project. The very subject of the kit is one that is always warmly received in the hobby, so although it’s kit an original subject there is enough about this kit and its charisma that makes it stand out from the crowd.

As I have mentioned several times throughout the quality of the sculpt, the excellent casting coupled with MJ Miniatures’ growing reputation and this highly interesting subject matter makes the kit particularly desirable. I have really enjoyed researching this subject and writing the review and I hope I will enjoy just as much the upcoming paintjob.

At 70 USD I would consider this at the upper end of the price bracket for a bust however, when the quality, scale, subject matter, superior casting etc are all taken into account, I believe this price is justified and is actually good value for money.