This wonderfully characterful bust arrived in a plain brown box, a sticker on the side naming the kit and sculptor, the two parts inside are nestled amongst packaging material. The packaging and presentation are basic and minimal however, the kit arrived safe and secure. This latest release from Black Sun Miniatures, Plic and Ploc, is a bust of a two headed giant, frequently referred to as an Ettin, sculpted by the uber talented Romain van den Bogaert. It stands at over 80mm in height and is cast by GRX Creations. 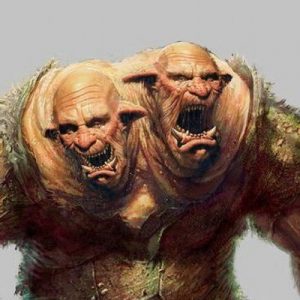 regularly portrayed in the fantasy genre

I have always considered two headed giants to be Ettin, derived from Old English word “Eotten” meaning Giant, a cognate word (one with common etymological origin) with the Norse “Jotunn” giants and have featured in myth, folklore and the fantasy genre, even appearing through Dungeons and Dragons as far back as the very first edition, where they are described as stupid, clumsy, malevolent and dangerous .

An Ettin has two heads, it is written that each of which is capable of independent thought, usually resulting in arguments and disagreements, yet when there is a common threat or enemy they are capable of working together. Each head is responsible for one corresponding arm and will control the actions of said arm during battle, menial tasks and other chores.

An origin story within an expansion of the game explains that legend has it that a tribe of orcs once stumbled upon a temple to a Demogorgon, the temple was a depository of transformative magic. The foolhardy orcs found themselves cursed and changed into giant mockeries of the twin-headed Prince of Demons. They scattered into the surrounding forest to become the first Ettins.

Romain sculpted this traditional style bust (head and shoulders) in polymer clay, in 1/10 scale and it is lavished with the sculptors usual extravagance and charisma. First impressions are that he has perfectly captured the somewhat idiotic yet dangerous nature of an Ettin!

The bust comes in two parts where all we literally need to do is attach the left head, so nice and simple however, I would suggest painting the two heads first (not the necks) then attach the head, fill any gap that is visible, prime the area and then carry on painting the rest. This is because in my opinion if you attach the head first you may find it difficult to paint the sides of both heads as they are relatively close to each other. Doing it the way I suggest will also ensure you can fill a gap before you have begun painting that area. 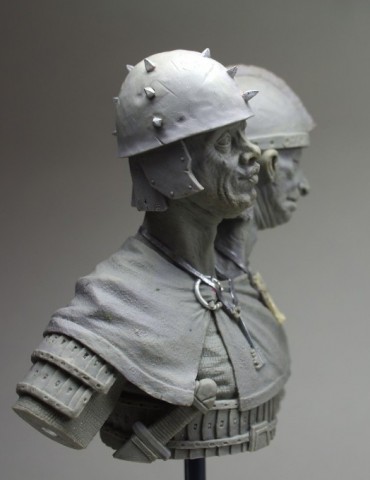 nive detailing and textures to the helm and clothing

I always thought that one was less stupid than the other, note I did not say smarter, yet it is really hard to decide which of these two may have been the “leader”. The left head, unattached, depicts a “jug eared”, large nosed, highly wrinkled character wearing a rimmed, iron skull cap with a metallic ridge that runs the length of the helm, front to rear down the centre.

As is the case throughout the sculpt, Romain has invested a lot of time creating an amazing range of textures to the head and helm. Under the helm he is wearing a lining, that reaches down from under the helm and reaches the nape of his neck. Not only are there dents and scratches to the helm you can also see that the whole surface is dimpled suggesting the piece was hammered into shape.

The main piece is quite delightful. The head this time is wearing a helm that is quartered with small, sharp studs with crude ear plates. Again the features show a somewhat confused looking expression, one eye squint shut the other open with raised brow, almost as if he is contemplating something he has seen.

The texture to the skin is nicely rendered with wrinkles, creases, pores and pimples. Draped around the shoulders and secured by an iron ring clasp at the throat is a coarse, plain tunic with edge trim. The folds and creases are natural and not overdone. The fabric patch on the left shoulder continues to represent the figure in an haphazard and worn manner. 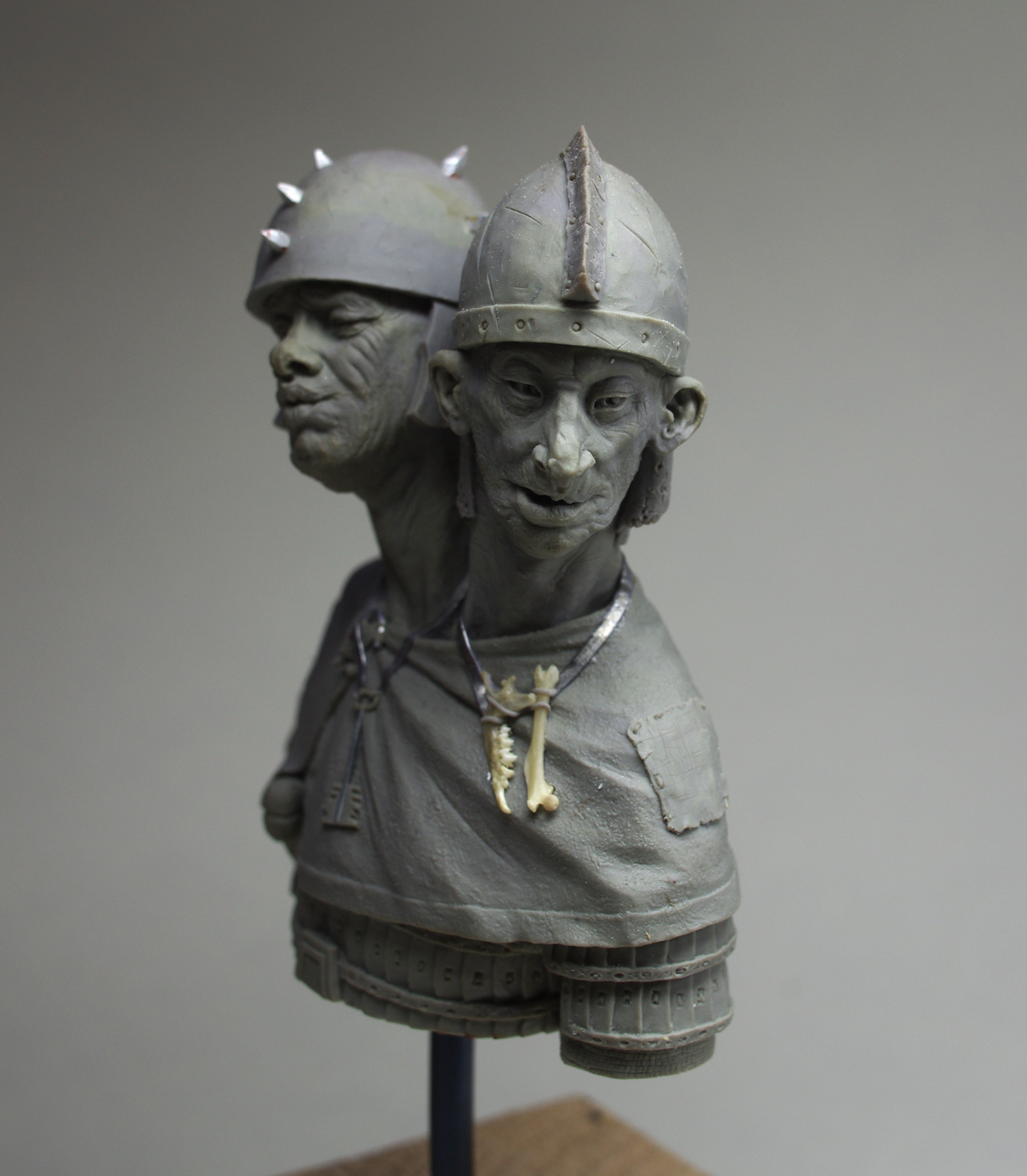 Around the neck we have an ornate key on a length of leather twine, around the other neck we have a necklace of fetishes. Beneath the tunic we have a short sleeved, fine chain-mail vest, which we see at the opening of the tunic and under the gambeson at the upper arms. The gambeson at the arms and across the stomach consists of what seem to be small leather plates held in place, top and bottom, by lengths of leather that goes around the circumference. There is a hint of a belt buckle near the navel and to the right side we have the pommel of his bladed weapon.

The cast by GRX is very well done, there is one slight mold line on the right helm and another small one on the left arm, other than that the cast is flawless, there are no major defects such as air bubble holes or casting slippages. There is a little piece of flash to remove from between the arm and torso and a few small plugs that need removing and filing smooth. 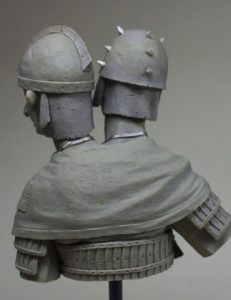 the rear showing tunic and gambeson

The volumes to the bust are very nice and give a sense of a creature quite immense in stature. It is a traditional bust and as such the design is quite basic when you consider the silhouette but the multiple layers of fabric and armour and the various scales of texture, makes the piece far more interesting than you may initially think.

Giants are another staple of the fantasy realm and we have seen many versions from the classic sculpts of Games Workshop in the eighties through to the Alan Carrasco giant created for Figone. Yet as always Romain has taken a subject and created something so charming and characterful it feels fresh and original. In many ways Plic and Ploc reminds me of the stop motion movies of Sinbad the Sailor or Jason and the Argonauts.

Black Sun Miniatures  continue to release highly sought after miniatures, in particular the fantasy range in 75mm, recently we have seen some pretty unique and beautiful bust sculpts, this being one of them. I really like this bust, the expressions, textures and levels of varying elements makes me think this will be a fun project. Romain is probably the most creative and prolific sculptor in our hobby at the moment, his ability to create unique monsters and creatures is second to none and each piece is highly desirable.

At £35 i think this kit is a steal and I believe that their approach to no frills packaging probably keeps their costs down which are fed back to us the consumer. This bust represents great value for money and is a snip of anyone’s money. Highly recommended.