The sixth release from Pedro Fernandez Works is a 73mm high, 3 part, polyurethane resin bust called “Online” depicting the head and shoulders of a female cybernetic, android life-form. The kit arrived in the now typical blackbox with red lid, inside we find the parts nestled within, red, shredded thick paper. The boxart was done by May Aguilar, with the high quality casting being carried out by SAGO! 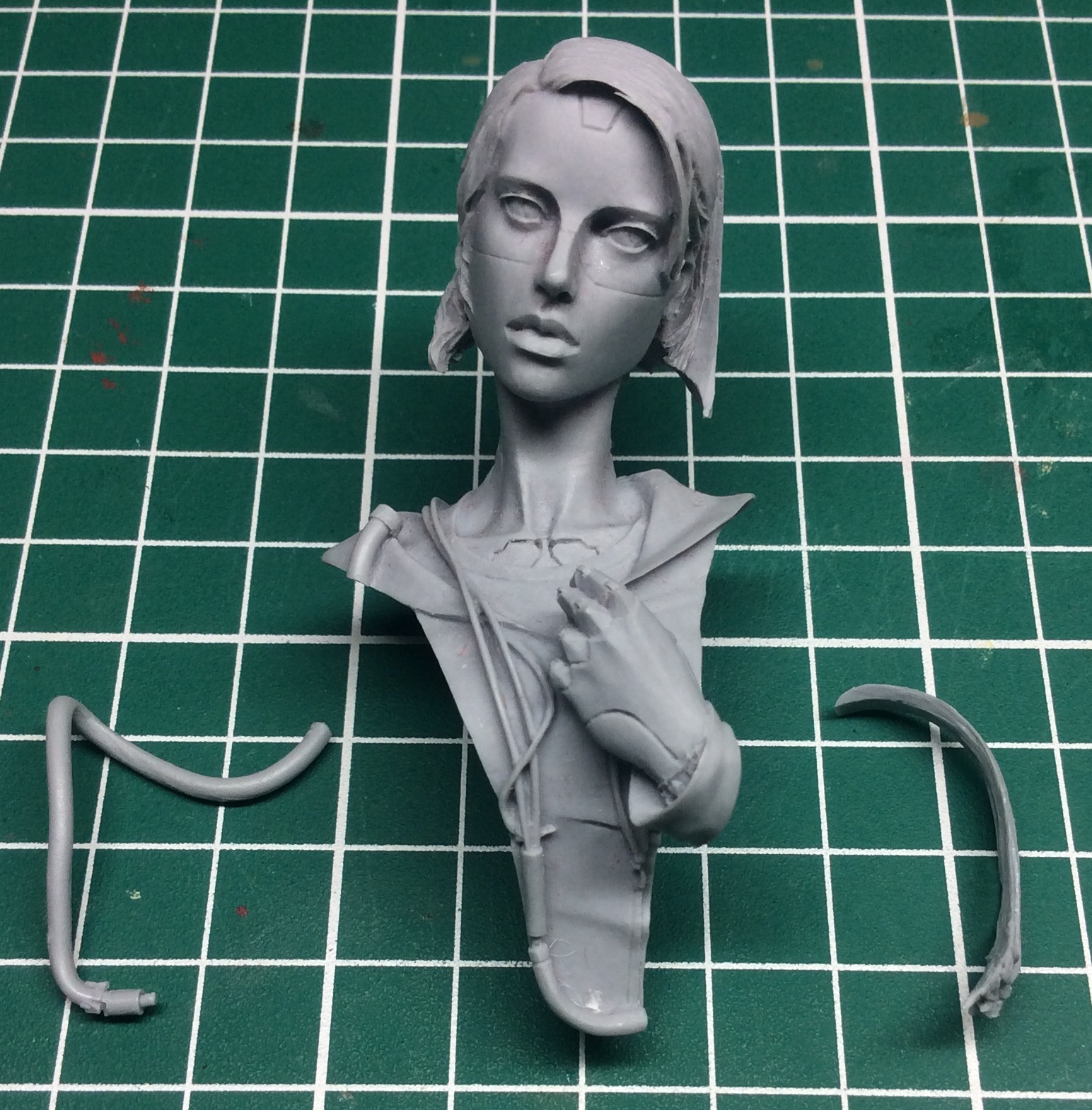 The bust is shaped in such a way that that her torso is hollowed out and forms the shape of the plinth of the bust. There is a section of hair that sits in the cutout of her head along with a length of tubing that seems to be a power supply or some such equivalent for her interface.

The kit also comes with a short narrative written by Pepe Gallego that helps to develop the concept behind the sculpt. As much as the previous kit we reviewed, Amon, was controversial so this kit is beautiful! First impressions are very good! 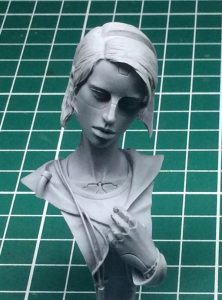 The detailing to the sculpt is exquisite and delicate and the overall finish is one of beauty and sleek lines. The form is instantly recognisable as that of a female but the subtle panel lines indicate her android origins. The facial features depict an entity in serene yet thoughtful pose, contemplating some deep inner meaning to her “life”.

“So, why can I feel? I had to have turned to my creator to ask him those questions before he was executed. I need to know why my circuits constantly recreate her face. I´m eager to understand why it causes me sorrow, when it´s not an attribute that robots should have. It’s too late to find it out now.
Loading … 76%”

The head is slightly inclined, her left hand delicately clutching at the neckline of her hooded tunic. Her eyes are somewhat downcast, full lips pouting, the eyes are really well defined which is great, a lot of attention and care can be taken on painting the eyes, ensuring you can create an emotive and expressive piece of work. There are parts of the anatomy that initially look human but when you look closer you can see that they have “AI” elements, like the ears for instance. 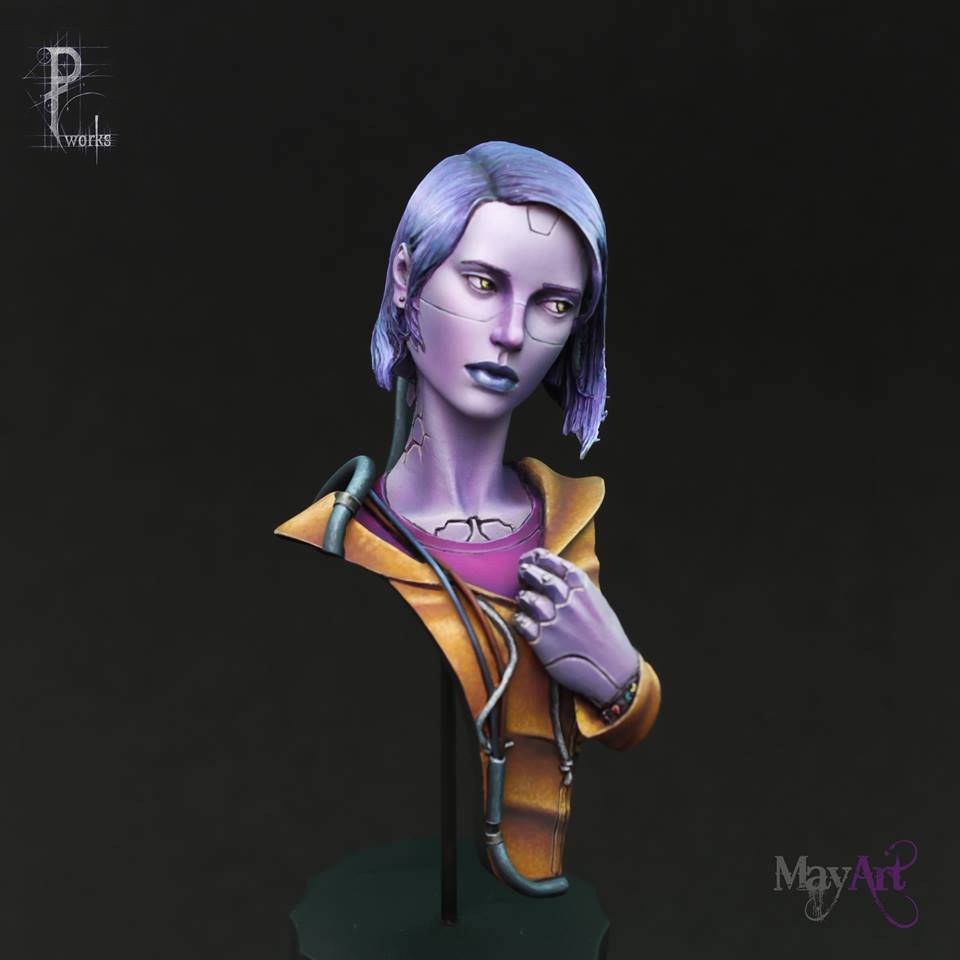 the boxart by May Aguilar

The neck is long and slender and at the back you can see how the “panelling” opens up to reveal the cabling of her “spinal cord”. The detail here is simply incredible. Poking from under her hair line we have an “adaptor” that the length of cable plugs into. Trailing from the open panelling we have insulated cables and wires that fall down over the right shoulder, over the chest and continue down to her midriff. The clothing is sterile and simple looking that gain ties in with the android/science fiction feel to the sculpt. 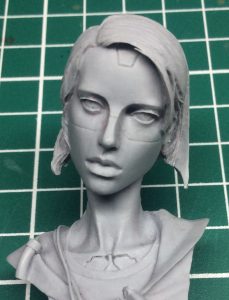 close up from the front

The cast is flawless, SAGO are setting a new standard and the bar is set very high indeed. There is literally no preparation needed,a quick wash in some soapy water and you are ready to attach the parts.

The imagination of Pedro seems to have no boundary, with each new release of his eclectic catalogue being as if not more original than the previous. The design is cleverly thought out as the bust peters out into the plinth. The hollowness to the bust adds to the sleek, delicate and vulnerable feel to the sculpt.

The composition is obviously balanced with it being the traditional bust type of just head and shoulders. The android itself isn’t necessarily an original concept yet it is the emotion and human “touch” that in my opinion has so creatively made this a piece of sublime originality. 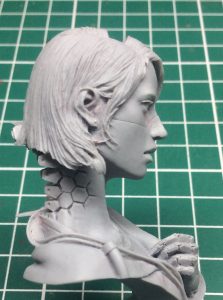 side profile showing the panel detail

Every new release from PF Works is warmly received, highly desirable and always causes a stir of excitement due to their original nature. Everything about the product speaks of the highest quality from concept and design, sculpt, cast and presentation. I hope to see more painted versions at the various shows and forums over the coming year and look forward to his next release.

At €38 I believe this price is particularly affordable and of great value, everything about the kit as already mentioned is of the highest calibre, it is a top end product with a very competitive price point.