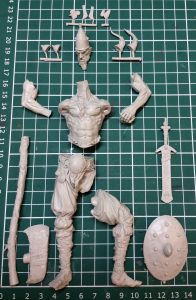 The full kit in all its glory

Moloch the Mountain Giant is a stunning figure, sculpted by the uber talented Allan Carrasco for Figone. Initially produced with the help through crowdfunding on Indiegogo, it is now available in their store too. It is a 17 part, polyurethane resin kit, standing an incredible 150mm, adorned with a wealth of detailing, making this by far my favourite kit of the year. At €59 it represents great value too, in no small part because of Jeremies’ “no frills” approach to packaging and shipping. What you see is what you get, in a ziplock bag within an envelope. Miraculously, despite the number of items I have bought from Figone, I’ve rarely if ever had any breakages or damage caused during shipping.

Let’s start with breaking down the various components. Allan has done a great job cutting this figure up ready for the casting process, many of the joins are in positions that are covered or will make any gap filling needed, a relatively simple task. The head and helm is a piece of art in its own right, with charismatic facial features and sharp detailing and undercuts to the eyebrows and facial hair. There are holes either side of his head to accommodate the decorative cheek guards. The cornet shaped helm is adorned with swirls both engraved and embossed and surmounted with a “shamrock” shaped piece of decoration. 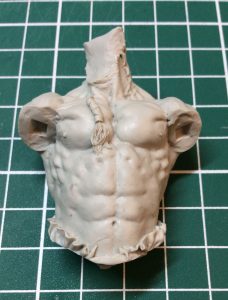 The helm also comes with two options: horns and what I would describe as “cup” shaped adornments. To date I have only seen painted versions with the horns as the other option looks a little “titular” although this was actually a valid and historically accurate option. The cut to the neck to allow attachment of the head looks somewhat over complicated but in fact the torso and head go together very nicely. Hair is sculpted directly to the back of Moloch and the tasselled ends of his beard are sculpted to his chest, meaning when the positioning of the head is correct, all the hair lines up nicely.

Excluding the head the main body consists of upper torso, waist and right leg, left leg and the two arms. The anatomy to the torso is nicely rendered and the major muscle groups are accurately presented. The arms are attached via a pin and socket assembly and dry fit shows that there shouldn’t be any need for gap filling.

The left arm is sculpted clutching his right hand, when the arms are attached, the right hand fits snugly to the right wrist and this hollow houses the top of the axes haft. The various pieces of decorative armour continue the spiral theme as does other elements such as sword, axe head and even present in scarification to the right shoulder.

The folds and creases to the trousers are natural looking and perfectly sculpted and the various straps, wraps and buckles all have really sharp undercuts. The folds in the trousers where the wraps cinch the fabric is another realistic touch. There are several other nice details including wrinkles to the elbow, veins under the skin, the toe nails etc and once more I really admire the natural and realistic details such as the wood grain sculpted into the haft and the Flint like properties of the axe head. The shield is interesting too with enough sculpted detail to make a basic paint job interesting yet also has enough open spaces to allow for freehand or battle damage. 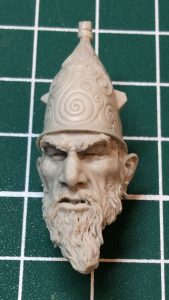 The cast is pretty good actually with no major defects such as air bubble holes or slippages. There are the odd one or two mold-lines that will need to be carefully removed and there is one which is quite prominent down the left hand side o
f his torso, starting at the tip of the neck, going down and across the shoulder muscles and all the way along the side down to the hip. Other than this the casting of all those details, is fine, crisp and sharp, there’s no fuzziness or blurred details, all the elements are perfectly rendered to maximise your painting experience.

Superb detailing to the armour and pantaloons

Unlike a lot of the classical Giant sculpts (chubby, dumb witted armed with ramshackle or makeshift weapons) we have seen previously, our Moloch is slim, muscular, ostentatious and has an air of cunning and intelligence. The armour and weapons suggest a Nordic or Germanic influence and indeed there’s a clue on the Figone website which reads:

The Moloch figure represents for me a pinnacle in fantasy figures that we rarely see. Allan Carrasco has paid careful attention to the tenets of good design, accurately presented anatomy, successful composition, exquisite detailing and many elements across the sculpt offering a wide range of painting techniques.

Moloch has a particularly expressive face, a pose that oozes charisma and in addition to all of this, lends itself to inspiring a good story, so I expect to see many different types of projects incorporating Moloch. 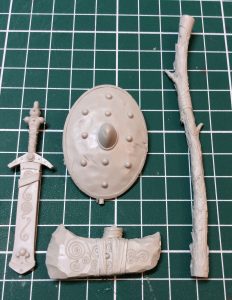 If there is one thing that Allan and Jeremie brings to the community it’s the “barn storming”, “show stopping” miniatures such as Rhinotaure, Gladiataure, Haan, Kahar, Rocco and now Moloch. Allan Carrasco is to many the ultimate sculptor, the sculptor whose work is always eagerly awaited, indeed I’m currently waiting for his most recent work, “old blood” a collaboration with Filip Burburan. The quality of this piece, the subject matter, the scale, the epicness, make this a particularly desirable piece.

Even for us who missed out on the discounted Moloch during the Indiegogo campaign this is still in my opinion a bargain. This is a premium miniature at a very competitive price and I expect to see this figure popping up at competitions around the globe.