a further piece for them as they unveil their first in a new range of miniatures – Mediterraneo!

I grabbed a chance to speak with them briefly for this review to get a little extra information out of them. Stefano and Federico stated that the fulcrum of the new range named Mediterraneo will focus on the legends and myths of the Mediterranean area, and, in particular, of the ancient Latin tradition. Their intent is to condense into special miniatures the most interesting figures of this part of Europe.

“Every figure of this range will be a unique limited edition. This is to differentiate this special line to our current classic fantasy line (that is not limited, apart from in exceptional cases such as Malefika)”.

This first release is a production of 190 units. Its name is Mediterraneo (Triton, son of Poseidon) – yes, the same name of the line. They chose this name for this character because it represents an ancient creature of the sea, one of the several creatures that our ancestors had glimpsed within the ocean waves of his same namesake. The first 30 units contain an alternative head (the one with long hair and beard, similar to Poseidon) in addition to the one of the concept. It’s a gift for the first 30 customers of Mediterraneo.

There is also a Mediterraneo PAINTING COMPETITION running from February-November 2016, you can see the full rules HERE.

The kit arrived safe and secure in a solid, clear plastic box adorned with the concept art by Stefano Moroni. This is an eight part, resin cast figure of 75mm scale. Within the box you will find two ziplock bags containing the parts plus Tritons’ staff, which just about fits within the confines of the box. The boxart for the piece on the website is painted by Marco Bariselli with an additional, alternative version by Mirko Cavalloni . 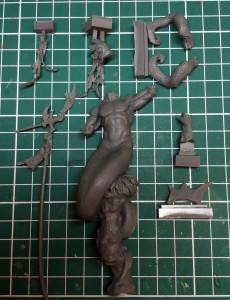 n insight or some information that I might not necessary be able to glean just from looking at the figure itself. So I was happy to have the opportunity to ask the sculptor Joaquin Palacios aka Freeman a few questions to help with this part of the review. The sculpt is purely based on the concept art by Stefano Moroni with one small change: the knees of Triton were removed so that from the waist down his anatomy morphed into the fishtail.

The figure is traditionally sculpted using Super Sculpey and Fimo. Prior to sending to Aradia, Joaquin also cuts the finished sculpture into the separate parts ready for casting, one of the most difficult processes of the entire project, in order to have the least possible pieces but simultaneously making the casting process as simple and effective as possible.

The sculpt itself is exceptional, a thing of real beauty in my opinion. The anatomy is nicely rendered, major muscle groups are accurately represented and the tail of the Triton is sinuous and graceful but also muscular and powerful looking, befitting the messenger of the oceans. The gills near the rib cage is a nice throwback to the environment the mythological character inhabits and the seaweed topped pillar of coral is another reminder. An alternative version can be built with the head of a Poseidon look alike, but alas only the first 30 copies sold contained the additional head. There are lots of nice textures and details to the sculpt too, including the engraved patterning to his horns (slightly disappointed that they’re not crab claw horns as described in a lot of ancient poetic texts about Triton). The masked head with the seaweed like hair is another interesting touch, with an almost aquatic design to the skull features ( a slight detour from the traditional concept of Triton) and then there is the rather ornate staff he carries aloft in his left arm.

The casting is re 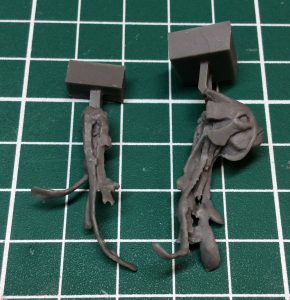 ally nice too, I could see no defects of any description on the main piece and only some minor clean up is required of the smaller pieces, there are no air bubble holes or moldlines either. The main piece, has the remains of a casting plug still attached at the foot of the sculpt which will need cutting away and smoothing down and each of the smaller pieces comes attached to a rather thick piece of “sprue”, again these will need to be carefully removed and the parts filed smooth. The filigree to the wrist bands is very fine but expertly cast, even the ultra fine texturing to the tail is present.

Triton was a fish-tailed god of the oceans, he was son and herald to Poseidon and his mother was the goddess Amphitrite. It is considered that he resided with his parents in a submerged city, according to Homer off the waters of Aegae. Triton was regularly cited within the Legend of the Argonauts and Triton was also described as the god of the giant Libyan, salt-lake Tritonis. When the Argonauts were lost in the desert during one of their “adventures” he assisted them in finding passage from the lake back to the Mediterranean Ocean. I love this new concept for the Mediterraneo range and I think this will become a rather original and unique series of figures. 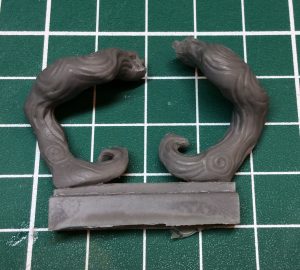 However, I do have one slight complaint and that is I believe there are some elements to this sculpt/design that may be considered missing. Homer and the other poets described him as having shoulders and hands hardened by molluscs and coral, a winged brow and a trident like his father. These things may have been considered and discarded during the concept stage so as to create their own version but there is one thing that Triton aka Mediterraneo should definitely have in this sculpt, his Conch shaped horn that he blew. It was described as creating such a cacophony that it could slow the tides and separate the ocean waves. For me this seemed like it would be an integral part of this design, but I guess that’s down to personal preference.

The concept, design and composition all work for me and as we have seen with Marcos’ boxart, the figure is destined for some awesome paintjobs. Aradia Miniatures have built a loyal fan-base over the last two years and I believe this new range of figures will fill a gap in the market. It is my opinion that all of these factors will make this figure and future releases particularly desirable both for the collector and competitive painter.

Aradia Miniatures continue to collaborate with some of the most influential sculptors and artists including Joaquin Palacios, Allan Carrasco and Benoit Cauchies to name a few. The popularity of these artists coupled with the original designs, concepts and the passion of the whole team results in a top quality product. In my opinion the price point for this figure is fair and competitive.

“Hey, we wish to thank Jason for his continued support and you guys too, without you we wouldn’t be able to bring the wonderful worlds of our figures to reality! Thankyou for reading, we hope to see your painted projects on Facebook! Do not fear obviously our fantasy line will continue, but the classic releases will be interspersed with some new releases of “Mediterrnaeo” line during the year!”.