This latest review looks at something that is so much more than a figure, this is literally a vignette in a box. This latest kit from Nuts Planet, is in 75mm scale and arrived in it’s usual blue box adorned with the boxart by Myeong-Ha Hwang, consisting of 22 polyurethane resin parts, a whopping 15 of which are necessary to construct the incredible scenic base, the barricade. The kit was a combined effort, Eduard Perez sculpted the figure with Ki-Yeol Yoon responsible for the base.

First impressions are very good although I have to admit to a fair amount of trepidation to even build this kit let alone put brush to it!

The French Revolution was a period of far-reaching social and political upheaval in France that lasted from 1788 until 1799, and was partially fuelled by Napoleon during the later expansion of the French Empire. The Revolution overthrew the monarchy and established a republic simultaneously, France experienced violent periods of political unrest that left the country in a dictatorship under Napoleon. Many of its’ principles began to spread and influence Western Europe and beyond. 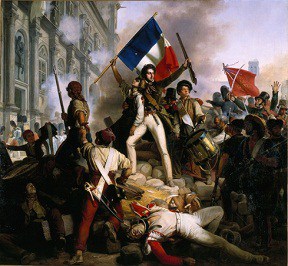 Inspired by liberal and radical ideas, The Revolution fed by radical ideas drastically altered the course of modern history, thus instigating the gradual decline of absolute monarchies around the world, Republics and liberal democracies, sprung up around Europe.

The Revolutionary Wars, became responsible for a wave of global conflicts that extended from the Caribbean to the Middle East. This particular revolution is rightly regarded as one of the most important events in human history.

Historians have debated for many decades now the causes behind the French Revolution but is widely accepted as being far reaching and complex. Following the Seven Years’ War and the American Revolutionary War, the French government introduced a series of unpopular taxation schemes to help tackle debilitating debts. Resentment and anger of the populace was was further inflamed following years of bad harvests whilst the clergy and Aristocracy continued to enjoy a privileged lifestyle.

King Louis XVI executed and blamed for a lot of the conditions of the common people prior to the revolution.

In May 1789 a large assembly of the Estates-General ( consisting of the clergy (First Estate), the nobility (Second Estate), and the commoners (Third Estate)) was summoned by King Louis XVI to propose solutions to his government’s financial problems, the Estates-General sat for several weeks in May and June 1789 but came to an impasse over the first item on the agenda: whether they should vote by estate, giving the first two estates an advantage, which was the King’s choice, or vote altogether, giving the Third Estate the advantage. 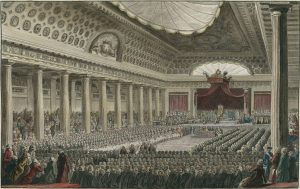 It was brought to an end when the Third Estate formed a National Assembly, inviting the other two to join, against the wishes of the King, signalling the outbreak of the French Revolution. The first year of the Revolution saw members of the Third Estate taking control, with several key events unfolding including the assault on the Bastille in July, the passage of the Declaration of the Rights of Man and of the Citizen in August, and a women’s march on Versailles that forced the royal court back to Paris in October.

Key to the success was the abolition of feudalism and the old ways of privilege, power struggles were frequent between the assembled and supporters of the monarchy, the latter intent on denying major reforms. France was soon a  democratic and secular society with freedom of religion, legalisation of divorce, decriminalisation of same-sex relationships and in particular civil rights for Jews and black people. The Republic was born in September 1792!

A central event of the first stage, in August 1789, was the the abolition of feudalism in 1789 and the destruction of the old rules and privileges. The next few years saw political struggles between various liberals and devout supporters of the monarchy who were determined to thwart any major reforms. However, France was soon to become a democracy  with changes being made to the society including the introduction of freedom of religion, legalisation of divorce, decriminalisation of same-sex relationships and civil rights for Jews and black people. In September of 1792, the country became a Republic after the French victory at Valmy (the first major victory by the army of France during the Revolutionary Wars that followed the French Revolution). Generals François Kellermann and Charles Dumouriez halted the advance of Prussian troops led by the Duke Of Brunswick (Charles William Ferdinand, 1735-1806) into Paris. In a momentous event that led to international condemnation, Louis XVI was executed in January 1793.

Without going into too much of a history lecture the French Revolution led to abolition of the monarchy, establishment of a militaristic democratic state, radical social changes influenced by principles of enlightenment and liberalism, the rise of Napoleon Bonaparte and subsequently conflicts with other European countries that frequently led to battles and wars.

First impressions are very good if not a little daunting and my first thought was that they really could have done with a instruction sheet or at least some clearer photographs of the boxart that would allow you to figure out how to assemble the barricades. 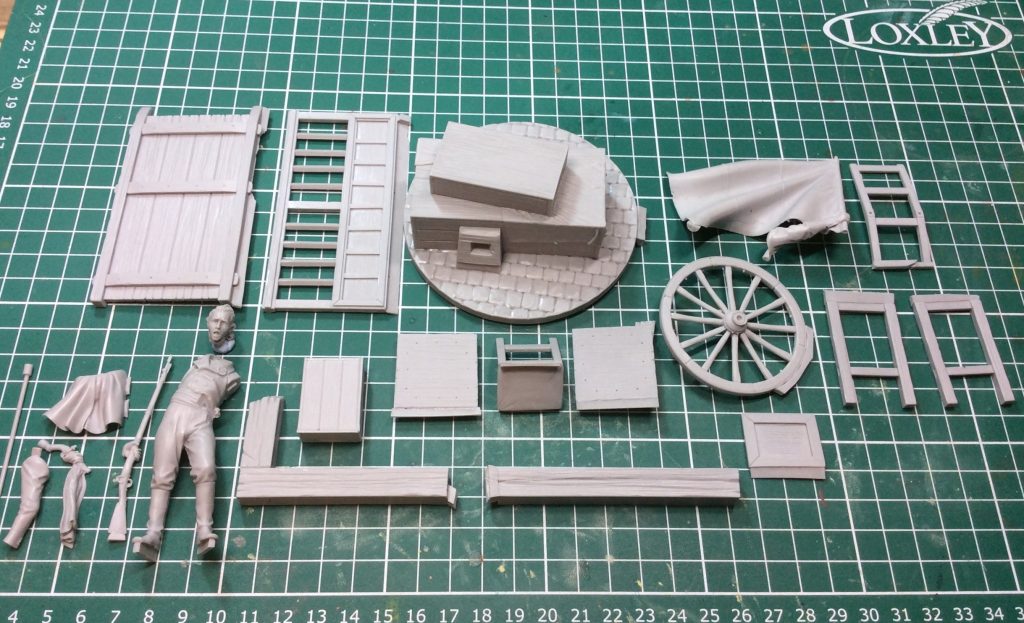 Beginning with the figure itself which consists of eight parts. The main piece consists of upper torso and legs with holes and pegs to receive the arms and head, dry fitting of the parts shows a tight fit and there should not be any need for gap filling. The long tailed jacket (comes as two parts, the tails fit naturally around the waist at the back) has large collars, itself buttoned to the chest, the design is of the wraparound sort with double facing buttons. 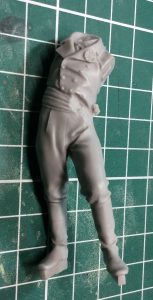 Beneath the collar we see a glimpse of a blouse and cravat. The creases to the jacket are nicely done and suggest the sculptor Eduard has observed the movement of fabric when in this pose. Around the waist we have a sash, displaying three bands, perfect for painting the tricolour and there is a little recess to house the pistol, draped from this are the tied ends of the sash.

The high waisted trousers are rather tight fitting in the jodhpurs style and tucked into his knee length boots. There are nice seams that run down the outside of each leg and a further one that runs vertical through the crutch. The creases and folds to the trousers are nicely done and not exaggerated, I particularly like the stress to the fabric around the left leg as it pushes forward and the fold of the inside right leg as our protagonist raises aloft the flag in his right hand, these show great attention to detail by Eduard Perez. The boots are nicely detailed too, stitched in sections, creased around the ankle and with perfectly rendered crease where sole meets boot leather. 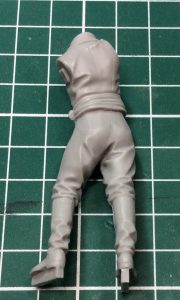 detailing continued to the rear

The arms continue the high level of sculpting with creases and folds, accompanying seams, cuff and three delicate cuff buttons. The left arm is loose, hanging down by his side with a small socket at the end to accept the peg of the hand holding the musket. Around the wrist of the hand we have a sculpted shirt cuff, so when attached to the arm it would appear that the shirt sleeve extends beyond the fabric of the jacket.

The weapon shows nice detailing to the wood stock, mechanisms and trigger guard. The right arm is sculpted holding the pole of the tricolour, another nice touch here is how the thumb whilst grasping the pole clenches flag fabric and you can see the impression of the thumb from the reverse, clever! The tricolour has three stitched sections and displays quite graphic and bold, flowing folds. A two inch length of flag pole attaches to the tricolour via a peg and hole assembly, again the fit is perfect.

That just leaves the head of the figure a relatively young man, showing a stern and proud face, furrowed brow, defiant stare and mouth open, as he calls out. The hair is swept back exposing delicately crafted ears and the locks flow down over his head reaching the collar of the long tailed coat. Sculpted around the neck is the collar to his undergarment, shirt or blouse. The head fits to the body and there is no need for gap filling. 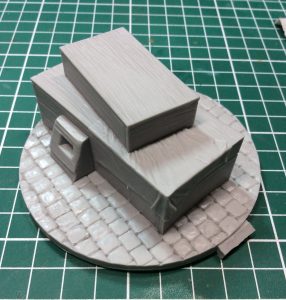 the central component to the scenic base

The main element of the base, being circular in shape, consists of a section of cobbled street, with large crates and boxes stacked upon each other. From this main element the other pieces are assembled and attached in manner to build up the barricades.

There are two large wooden sections that constitute the main sub assembly and about this we then build up the additional smaller items to create the overall effect. Beams, cross sections, a wagon wheel and smaller items such as a chair, crate and framed picture complete this stunning vignette.

There are nice details throughout these sections including realistic wood-grain, triangular batons to the interior corners of the crates, iron rim to the wheel etc etc.

The cast is good but the copy I received I believe was not to the usually exceptional standard, there are no major defects such as air bubble holes or casting slippages but there are quite extensive mold lines down both legs and the boots, also to the right arm and the tricolour, there are resin plugs to the edge of most parts, a result of the casting process, but they should pose no major difficulties in removing and filing smooth. Everything fits together very well, now I just need to work out exactly how this all goes together. 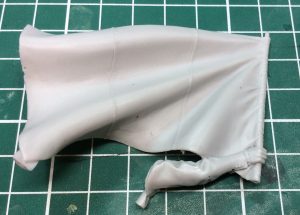 This kit is crammed full of parts, I have never seen anything quite like it before, there is literally an entire vignette in a box. Yet for all of this and despite this it is an incredibly well considered kit whose design is balanced.

The barricade with the protagonist upon the top with arm outstretched and tricolour held high represents a very solid triangular composition, forcing the viewer’s vision to travel the entire kit but always being led in and up to the focal point, the figure.

Figures of this era are are a popular subject especially the Napoleonic Wars but I have never seen anything presented in this manner, once again Nuts Planet have taken a tried and tested subject and give it their usual twist to produce something that is more than just a figure.

The subject matter is quite specific so I can only assume that this will have the most appeal to those historical figure painters who have a genuine interest in this era. The team of sculptors have done an incredible job bringing the sense of rebellion and victory to life in this vignette the various elements offer the painter with a  vast canvass to show off a host of techniques and the tricolour gives the painter the opportunity to try some freehand. I think the kit is historically accurate enough for those who wish to follow a more “true” path whilst if the painter wishes to approach the project more relaxed, then there is enough about this kit to create something original. 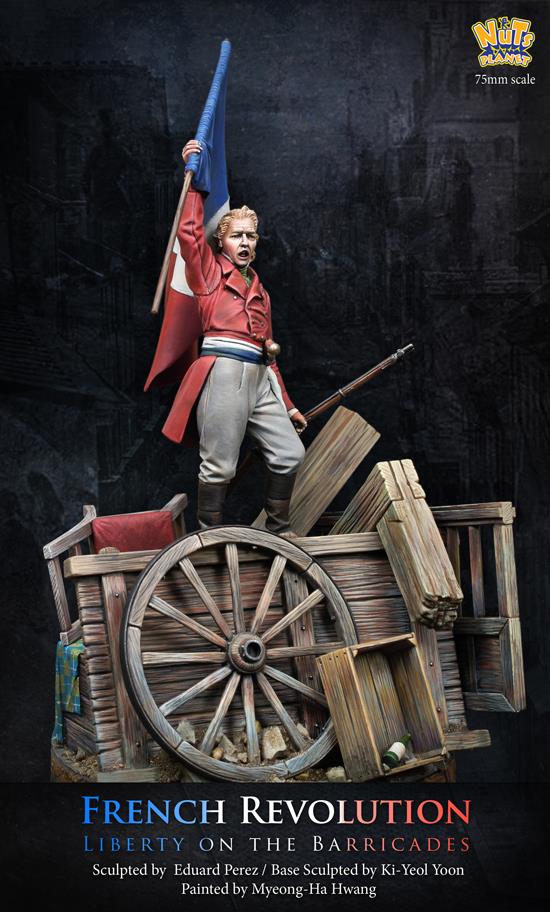 another angle of the boxart

This is at the upper end of kits that I personally could afford at $75, that said though it is not a subject that I am currently interested in although I am aware for the historical painters this is a very attractive era and so this kit would be of particular interest to many. The kit may not necessarily be the most affordable out there but it offers incredible value for money baring in mind the contents of the box and if it was to be entered at a competition, it would look truly remarkable on a suitable plinth.

Nuts Planet continue to raise the standards and expectations of what can be achieved!