Tartar Miniatures continue to blaze a trail for fascinating historical subjects and a while back sent me some samples, this one is the Landsknecht bust, sculpted by Sergey Savenkov and consisting of just four polyurethane resin parts and a length of metal sheet for the hats’ chinstrap, all sealed in a ziplock bag and nestled in some bubble wrap. The white box is adorned with the boxart by Ruslan Vorobiov (again the photography here is not one I like, I have seen images of this piece online and they look much better). Alternative boxart is done by the incomparable Kirill Kanaev. First impressions of the sculpt and cast are good so let’s take a closer look. 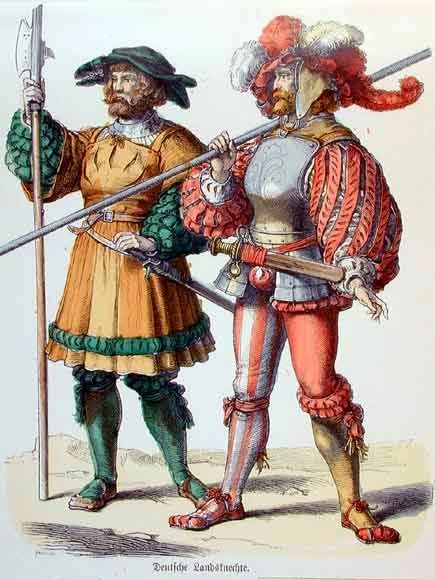 Maximilian I (Holy Roman Emperor 1493 to 1519) formed the first mercenary Landsknecht regiments in the XVth century and  called upon Georg von Frundsberg (1473–1528), the “Father of the Landsknechts”, to assist in their organisation. Landsknecht mercenaries would fight in almost every 16th-century battle, sometimes even on both sides! 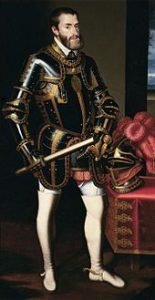 The Landsknechts consciously copied the dress and tactics of the Swiss mercenaries and in their formative years even used Swiss instructors to train their pikemen and foot soldiers. The Landsknechts were limited in their usage of weapons and relied heavily on pikemen however, they were more inclined to the tactical use of firearms than their Swiss inspiration. As Imperial soldiers, they would often fight in formations, mixed with Spaniards during the reign of the King of Spain and the Holy Roman Emperor Charles V (1500-1558). The Spaniard’s widespread use of the arquebus and musket, was the perfect compliment to the pikemen!

In the late 15th century, the Landsknecht defeated Frisian armies consisting of far greater numbers. Paul Dolstein wrote in his journal of the siege of Älfsborg (a large sea fortress in Gothenburg, Sweden) in July 1502, fighting for the King of Denmark: “We were 1800 Germans, and we were attacked by 15,000 Swedish farmers … we struck most of them dead”.

The Imperial Landsknechts were instrumental in many of the Emperor’s victories, including the decisive Battle of Pavia (Italian War 1521-1528) on 24th February 1525. The same year, they also managed to defeat the peasants’ revolt and at their peak in the early 16th century, the Landsknecht were considered as formidable soldiers who were often brave and loyal.

They fought in many battles as mentioned sometimes on both sides but as time went on and other forces became more professional, their attitude and usefulness was called into question. Without doubt the most infamous event of their history was the Sack of Rome. When the army of the Holy Roman Emperor defeated the French in Italy, 34, 000 imperial troops mutinied when it became apparent there were not funds enough to pay everyone. Up to 14, 000 Landsknechts under the command of Georg von Frundsberg, practically forced the Armies’ commander to lead them to Rome!

Having opened the box I can say hand on heart that the boxart image does this no justice at all, if I was to base my decision to buy, looking at the boxcover I probably would not make the purchase. The actual boxart by Vorobiov is stunning, the photography let’s it down and so first observation to Tartar Miniatures would be to invest some time into getting better images. 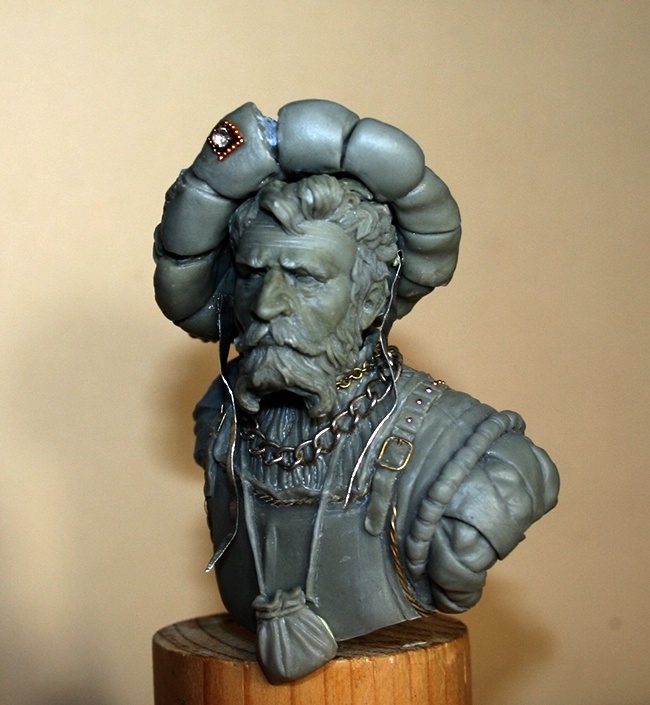 here you can see the various materials used for the master sculpt, note the metal sheet straps

Starting with the torso, we have nicely detailed ruffled undershirt with the large shoulder frill and cut out sections. The uniforms were garish and extravagant and the sculpt captures this perfectly displaying sharp undercuts to the various fabric boundaries and straps. The subject sports the low lying chain around the neck, with lengths of cord sculpted to the torso to act as the tie for the pouch, which attaches via a peg and hole assembly. 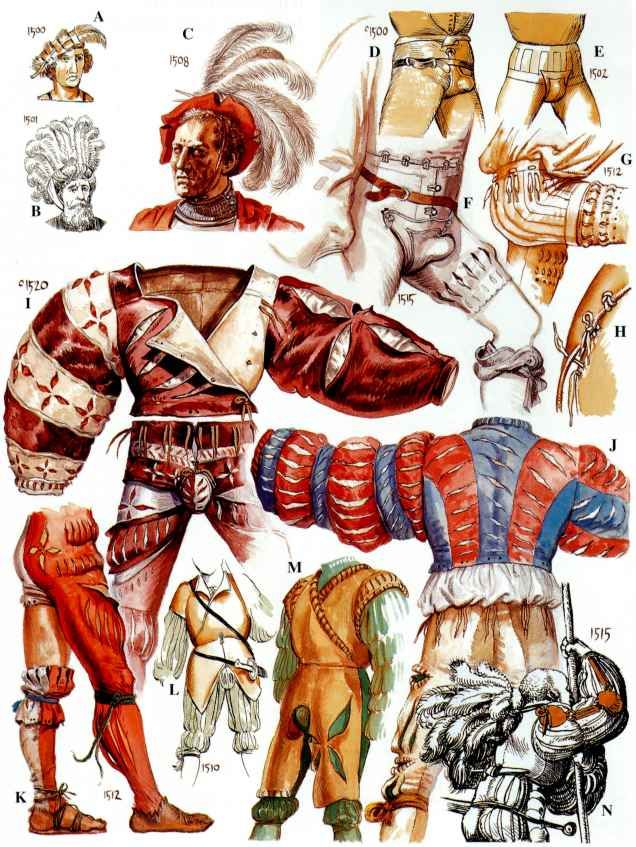 We also have the metal cuirass covering the chest with corded trim, detailing to the strap buckles is crisp. I have no knowledge of the uniforms of these brave mercenaries but the seams, creases and folds are all nicely rendered.

This is a 1/9 scale bust and as such we can really put in a lot of effort painting the expression into the face. The head is particularly characterful, the hair is accurately sculpted with nice volumes and shape and the facial features are expressive and have the air of sadness and weariness. He have wrinkled brow, hooded eyes and hawk nose, the bags under the eyes add to the weary look of the mercenary and the mouth is grimly set. 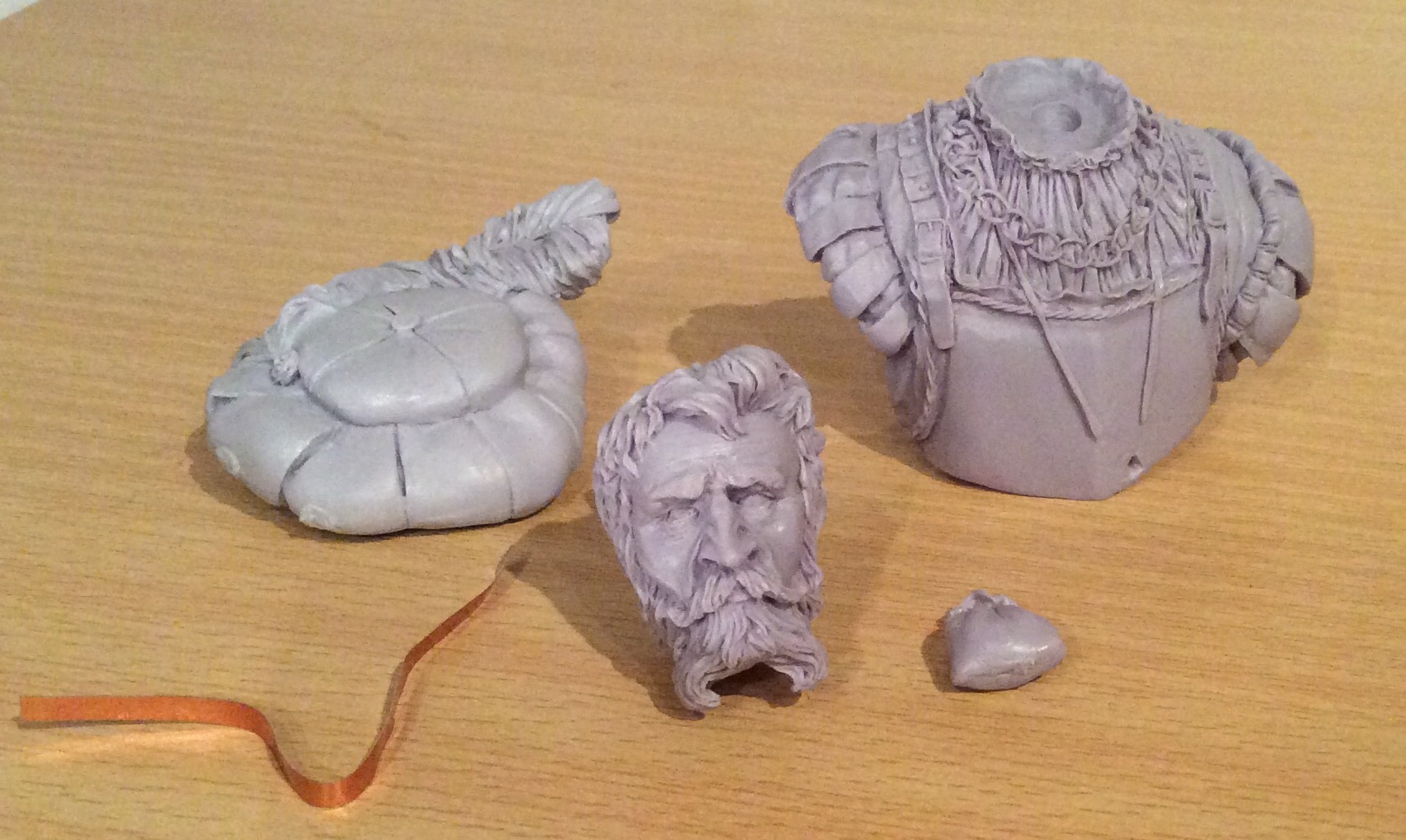 The head attaches to the neck via a large peg, the fit is perfect with no need for any gap filling. There is a large “plug” of resin that needs removing from the back of the head, at the apex we have a diamond shaped hole to accept the peg of the hat. The hat is instantly recognisable with its floppish, overlarge design, slashed sections and decorative feather, with badge sat over the right eye. The detailing is nice and the fit once again is perfectly snug. 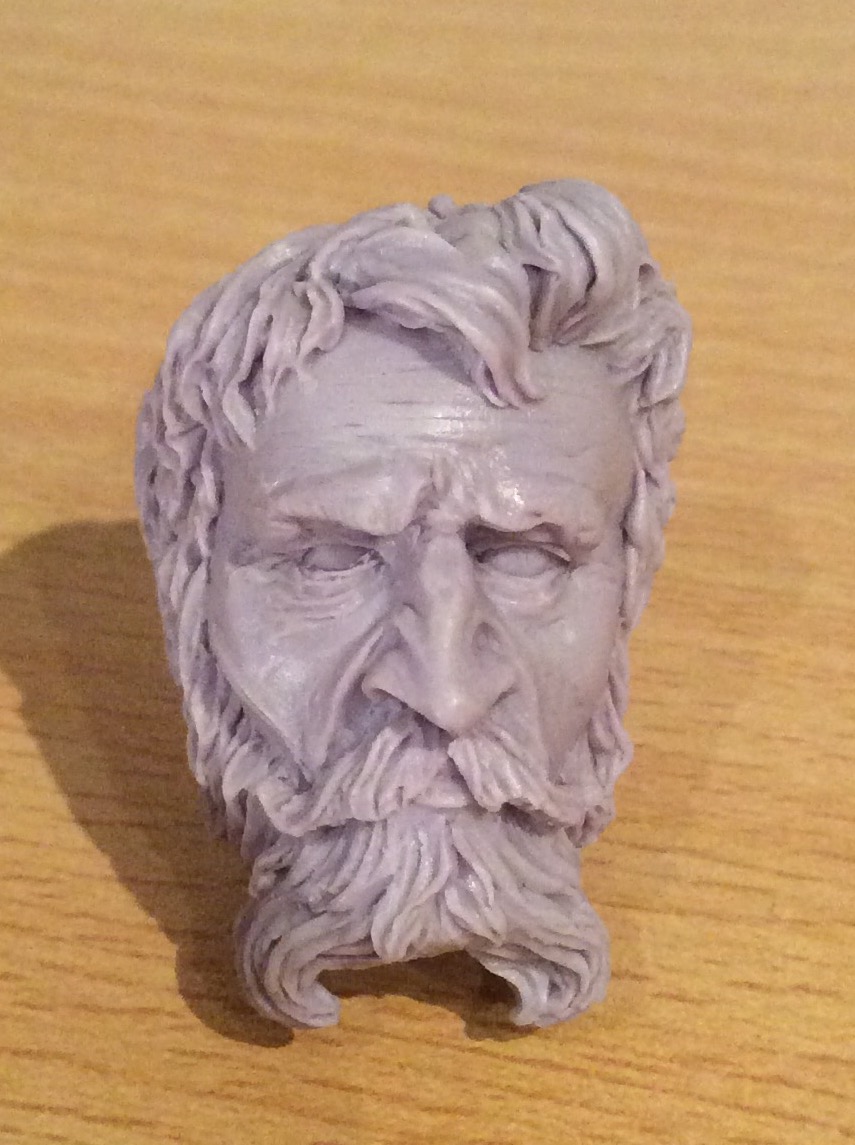 The cast is great with few moldlines and no major defects such as air bubble holes or casting slippage, with just the one casting plug to remove as mentioned on the head. Even the smooth, rear surface needs no cleaning. Preparation and assembly should be very quick and straight forward! 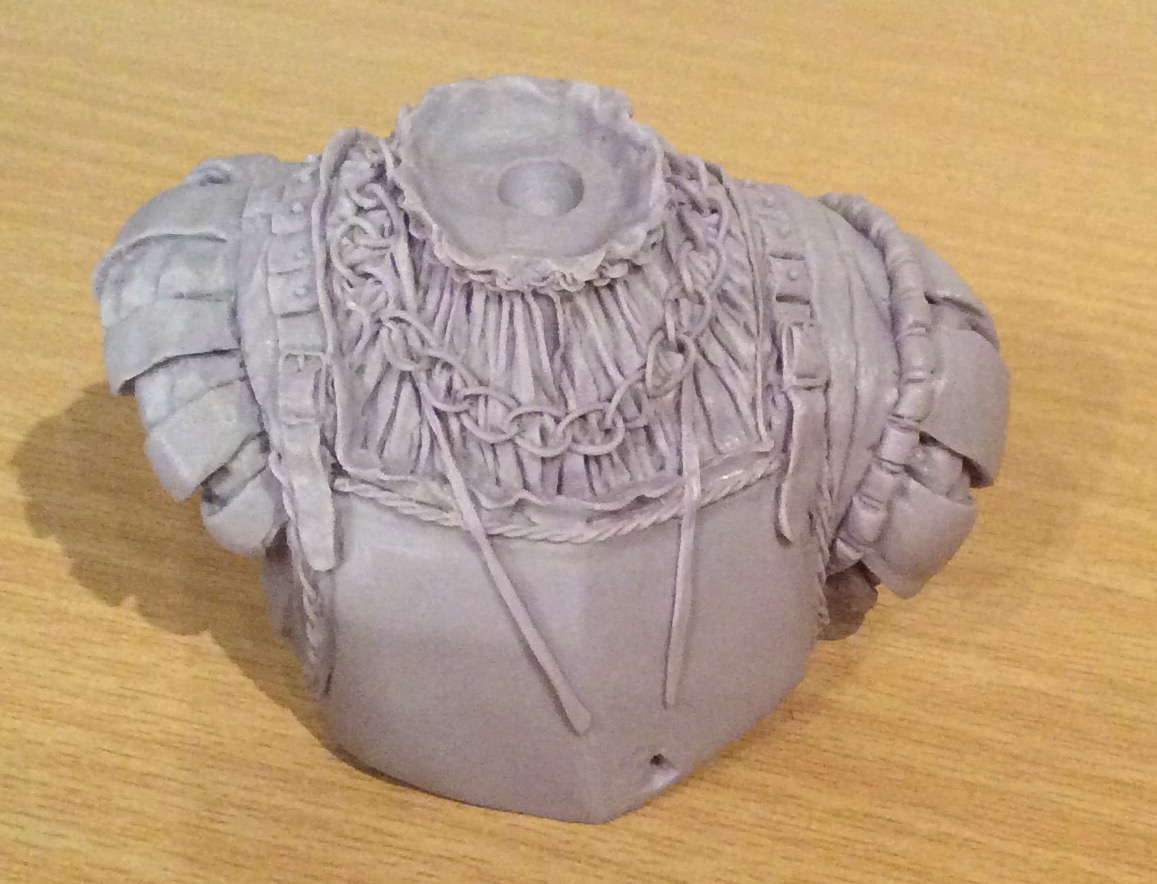 The bust is in the traditional format, comprising just head and shoulders and from a little research is predominantly historically accurate with nice detailing and textures throughout. The head is tilted slightly down and off centre to its’ left which adds to the sense of sadness and melancholy. The landsknechts are a popular historical subject for their apparent paradoxical nature; brave and fearsome yet wearing gay and garish uniforms. Below we can see the various versions of the bust painted by Kirill Kanaev and Ruslan Vorobiov.

As I have mentioned the subject is popular within historical circles and the sculpts of Sergey are always warmly received in the figure painting community due to their accuracy and levels of detail, partnered with characterful subjects. The quality of the cast is another great attribute and I am sure this piece will become another welcome addition to the catalogue.

At €45 I believe this makes for a reasonable if not exactly great value kit, the piece only consists of the five parts however, this should not detract from what should be an enjoyable project and the scale offers a great canvas to execute certain techniques.