When I saw Ben release his new, aesthetically beautiful website followed by his announcement that he would be creating his own brand of miniatures, I was very excited. Ben Komets is a prolific, master figure painter at his creative peak, in addition to his incredible box arts, private commissions and brand of miniatures he also has a Patreon account producing stunning, state of the art colour guides, tutorials and videos. 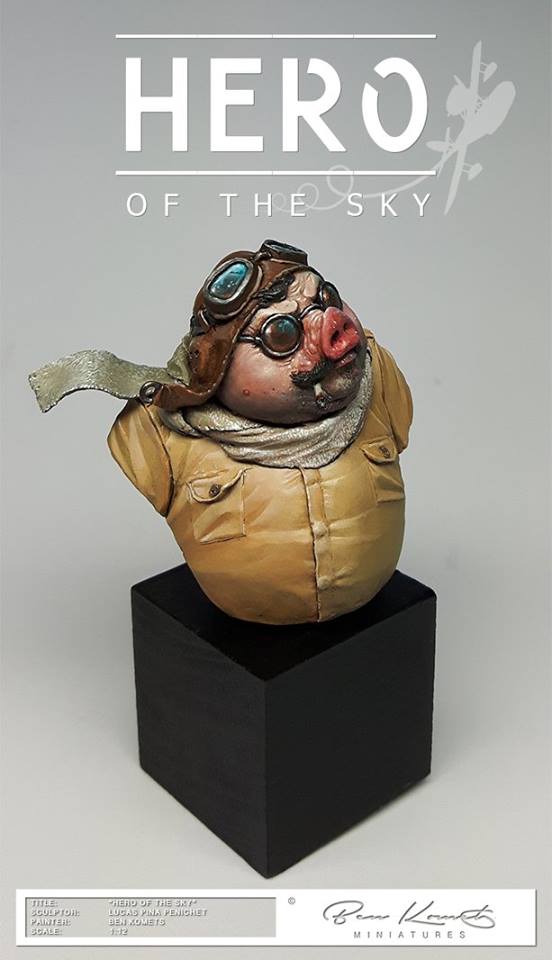 The debut release from Ben Komets’ Miniatures is Hero of the Sky and the first batch, SOLD OUT very quickly and demand for more resulted in a second wave, of which mine is one. At the time of press there were only FIVE copies left and when I spoke to Ben, he doubted that there would ever be anymore, my advice would be “don’t take a chance on getting one later, get one now before they’re all gone!”.

It arrived in a wonderful, handcrafted, wooden box, pyrography on the lid depicts Ben’s logo, there are brass hinges to the lid and a delicate brass clasp. Inside the box we have a sticker, a  box art card with details on the reverse and of course the bust, nestled within black tissue paper. There are three small parts that come inside a ziplock bag. The presentation is exquisite!

With Ben being so immersed in the hobby and so busy I was curious to why he would take on the additional challenge in bringing a new figure brand to an already saturated market, here is what he had to say: 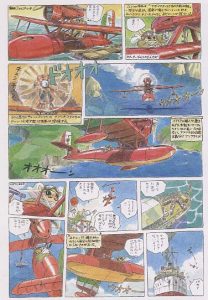 “I think it’s great to see the enormous variety of miniatures from all over the world.. but often those miniatures are from the same world.. the same stereotypes. Miniatures today will always sell well if they are the typical heroes/villains, sexy girls and monsters. Most companies fill the market with the same archetypes over and over again.

I would say 90% of all miniatures are war-related and I think its a little sad that from all the topics in the world we choose to have war as a free-time hobby. I wanted something else, something funny, something charming, something that allows you to paint other atmospheres”.

The piece is clearly an artists tribute to one of Studio Ghibli’s most iconic characters, Porco Rosso! Porco Rosso (Crimson Pig) is a 1992 animated movie written and directed by Hayao Miyazaki, developed from his three part watercolour Manga, Hikotei Jidai and produced by Toshio Suzuki.

Marco Pagot, former Italian WWI pilot, suffers an unusual curse which sees him transformed into an anthropomorphic pig and is now known as Porco Rosso. He becomes a freelance bounty hunter tracking and chasing pirates of the air over the Adriatic Sea. 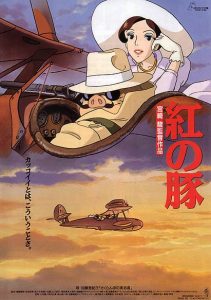 This is the only film that Miyazaki directed that could easily be told as a real life, true story with the various similarities such as WWI, Marco the Italian hero, Adriatic Sea, fighting Austro-Hungarians.

It was the number 1 film in Japan in 1992 and recently a sequel has been discussed at length. The proposed title is Porco Rosso: The Last Sortie. However, this was back in 2011 and following the subsequent departure of Miyazaki and Yonebayashi from Ghibli and the uncertainty surrounding the studio, the exact release date or even if there will now be one, is very much up for debate.

This is a 1:9 scale, polyurethane resin bust of the traditional variety, in as much that it presents just head and shoulders (a bit of pork tummy too). There are three small parts that need attaching and you will need to take care as they are somewhat delicate.  The bust stands about 50mm and is sculpted by the uber talented Lucas Pina Penichet, this second batch of Porco was cast by Raffaele Picca and Bene Sedlmair at Forged Monkey. 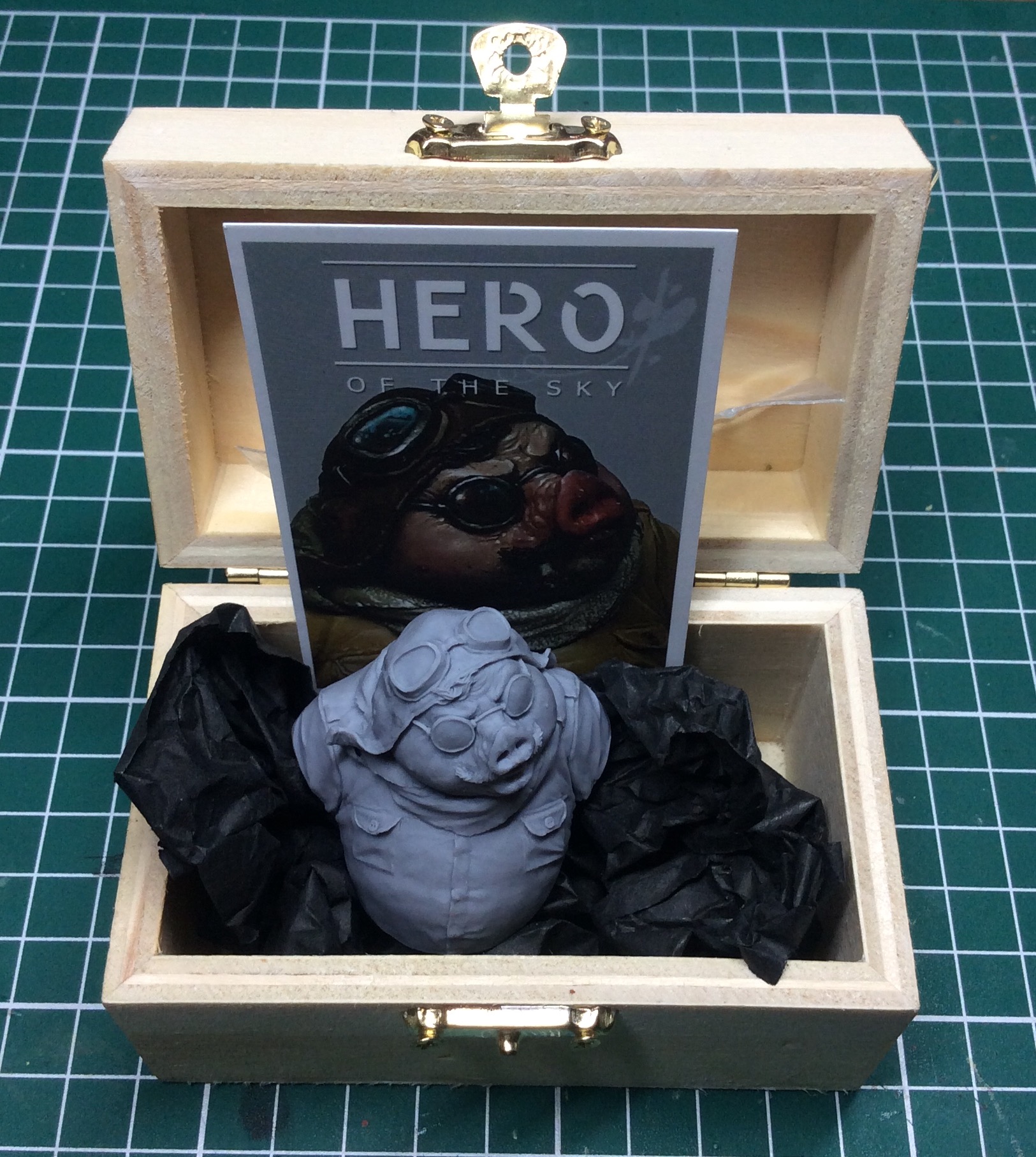 The sculpt wonderfully captures our enigmatic hero and Lucas has paid careful attention to details, for instance we rarely see Porco without a hat or flying “Biggles” helmet (aviator), yet Lucas included the tuft of hair at the front, peaking out from his cap. Another precise detail is the inclusion of the three holes in the ear muff section of his aviator!

Lucas has added more texture to Porcos’ skin compared to the smooth illustrations in the book and film but it is undoubtedly and unmistakably Porco. The iconic moustache is nicely detailed and his wire rimmed glasses are accurately scaled and sit upon his cheeks, the left lens nestled beneath his arched left eyebrow. 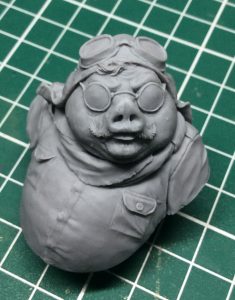 porco in all his glory

The aviator has nice trims and details to the chin strap and the goggles upon his head are accurately rendered, the various straps and loops showing sharp undercuts. There are nice crinkles to the cap where the goggle strap cinches the fabric beneath.

The scarf around his neck is once again modelled on the Ghibli character and shows nice creases and folds, beneath this we have his leather flight jacket. The jacket is double breasted, the pockets buttoned up as is the jacket itself, the button holes straining to keep his portly belly within.

There are realistic and subtle creases to the jacket especially around the shoulders and under the arm pit. The seams are clearly shown along the shoulder and there is also a centre seam that runs the length of his back.

The three small parts include the section of scarf which is blowing in the wind, there is a slot, behind his right ear flap to allow assembly. This is a nice consideration because I hate trying to attach small parts where there is only a small surface area for the glue to bind. The second piece is the end of the chin strap that carries the “D” buckle to fasten. The final piece is Porcos’ cigarette, which is attached via a hidden hole in the side of his mouth.

The cast is faultless, you will just need to tidy up the small pieces when you remove them from their small sprues, there are no defects whatsoever. 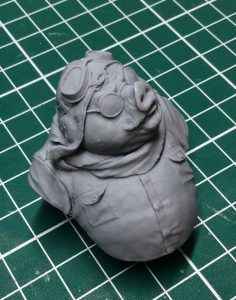 The design is simple and straightforward, seeing as this is the classic bust format, the details are perfect, with some nice textures too. The piece is quirky, characterful and romantic. Porco Rosso has been transported from the big screen straight to our work benches and I for one, along with so many other Studio Ghibli fans, am very happy.

As Ben mentioned earlier, the purpose of his brand of miniatures is to offer a more lighthearted approach to creating and painting miniatures. There are other sculpts out there that may be considered to have a trivial element to them but I have never seen anything like this and certainly not in a commercial capacity.

Creating a bust or miniature based on a Studio Ghibli character would have been great but Porco Rosso is a personal favourite of mine. I don’t really need to pontificate on whether this piece is desirable, the fact that the first batch sold out and that there’s currently a half dozen or so copies left, is a clear indicator how desirable this release is. This piece will be of interest to painters and collectors especially those who have an interest in Anime, Manga and indeed Studio Ghibli.

At €35 I think this little bust hits the spot perfectly. The concept, sculpt, cast and presentation are of a high end product yet in my opinion the price most certainly is not. This bust offers good value for money and I am sure the remaining copies will not be around for much longer!