It seems that new companies are springing up everywhere and one initially believes this to be a good idea right? Then when you scratch beneath the surface I am not so sure, our community is not growing in my humble opinion, the number of companies increases yet that doesn’t mean the number of possible customers is. So in effect we have more and more people, who use to view this as a hobby, who now see this as a possible manner of making an income, in other words a lot of people want their slice of an ever decreasing pie! 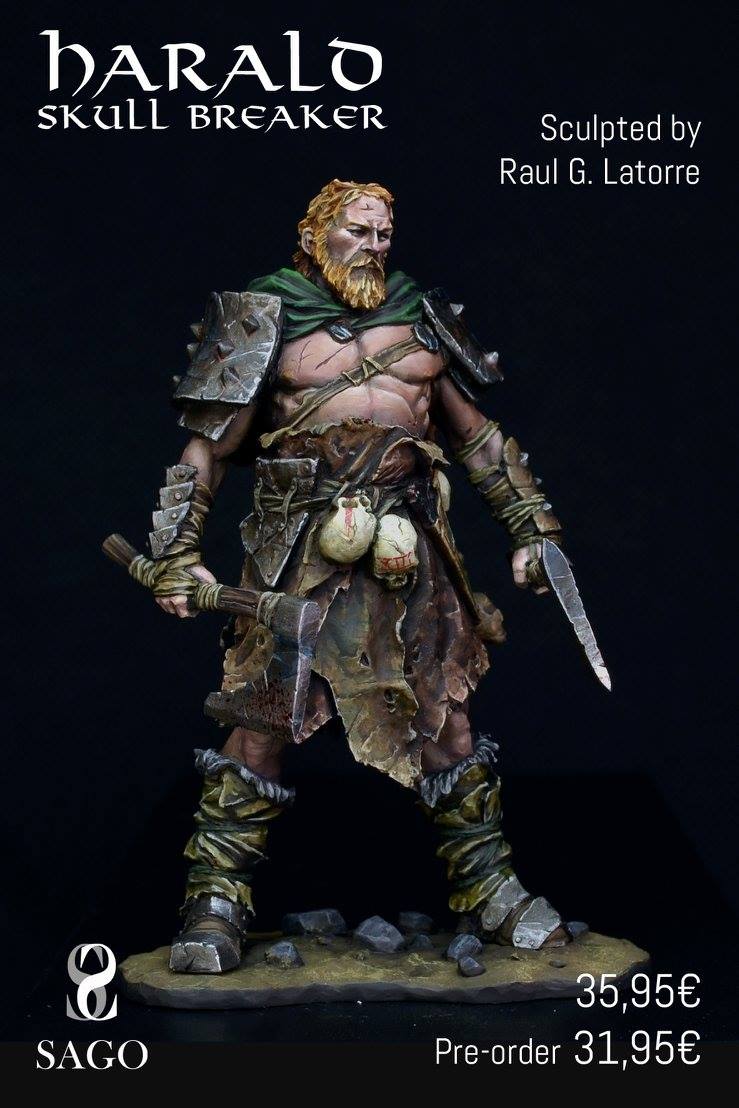 However, when a company such as SAGO comes along with a figure such as Harald, sculpted by the incomparable Raul Garcia Latorre, then clearly this is a positive thing, at least for me. This figure ticks all my boxes and gets my creative juices running. The kit consists of seven, polyurethane resin parts including a small scenic base and arrived in a rather plain brown, sturdy box adorned with the box art by Alex Varela. The parts are contained within bubble wrap bags and on opening, my first impressions are very good indeed!

The team of SAGO consists of it’s creator Antonio Lara, who is also the caster and Antonio Fernandez (piqui) the sculptor who also helps out with the casting work. SAGO have close ties with Tiny Leads and whilst their site is under construction you can purchase this figure there.

This was a very easy miniature to assemble, the preparation was minimal to an extent however, a poor cut by the sculptor means that there is a gap between the section of cloak and figure when it is attached. The gap should be easy to fill though. This is a 75mm scale kit and the main part of the figure consists of head, torso and legs. There are so many nice elements to this barbarian I almost do not know where to start. 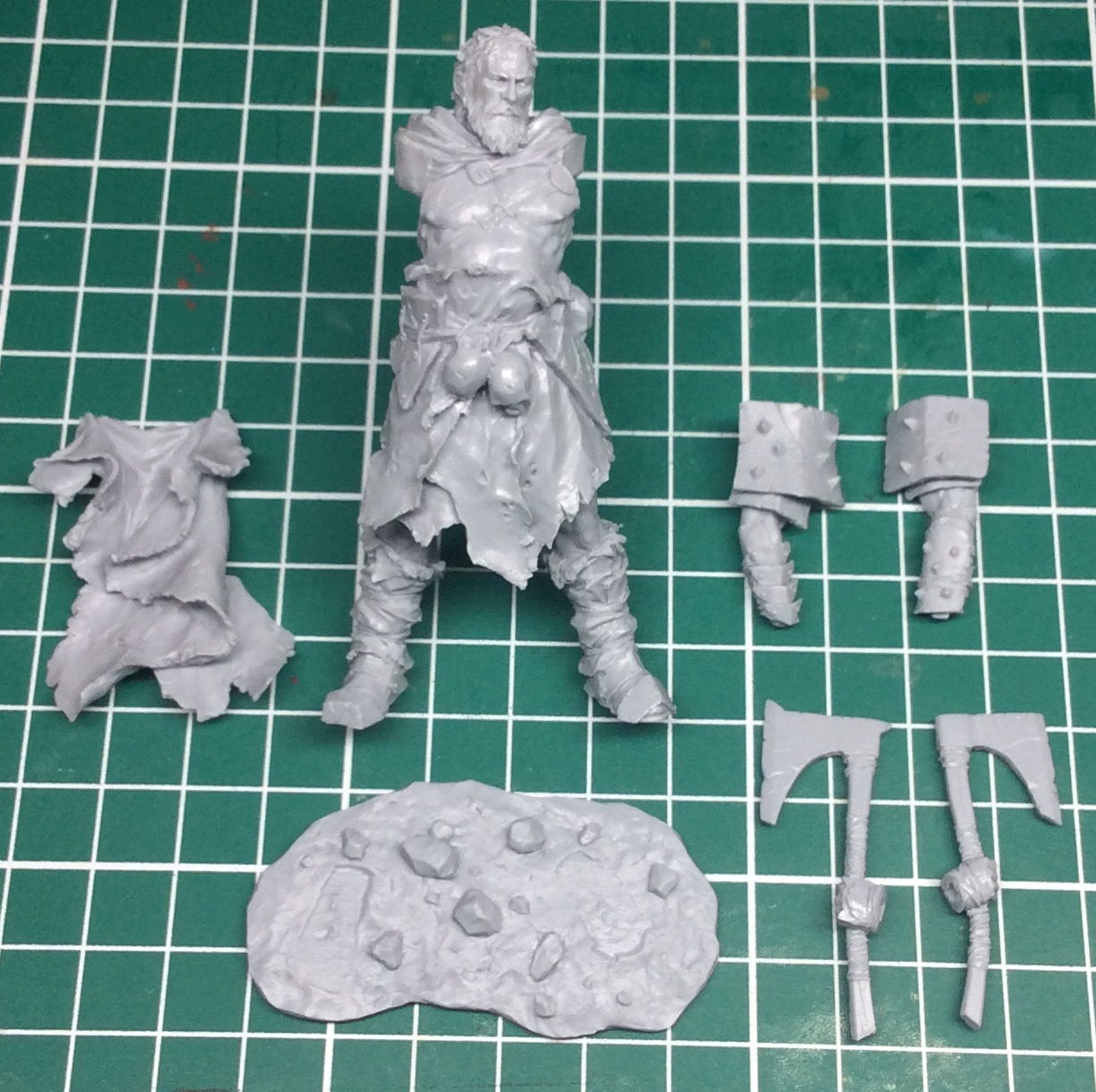 The head shows the charisma and skills of the master sculptor, slightly down cast with furrowed brow, it depicts in my opinion a seasoned warrior that had seen and committed many atrocities in his battle hardened life. The rendering to the hair and beard are expertly done. The anatomy depicts a muscular, barrel chested brute but as always with a Latorre sculpt it is not over done and this makes the character so much more believable. 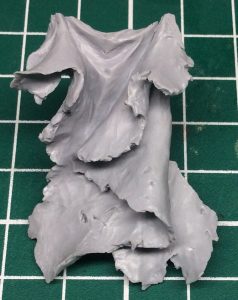 nice folds and textures to the cloak

From around the shoulders we have this hide cloak which is delightfully sculpted with a wealth of textures, not only that but the deep folds and volumes of the cloak really make this an attractive element of the sculpt. The studded, armour plating to the shoulder looks crude and heavy, maybe forged from iron or some other such metal, scratched and chipped to match the rest of his attire.

Around the waist, we have a high sitting loin cloth, secured by a hemp looking material, with armour plates threaded through around the hips, above the groin area we have the obligatory skull trophy. In fact it is really only at this point that you realise that this figure has it’s origins within the fantasy genre, this could just as easily have been depicted as a Viking or the skull hunting Celt.

The arms attach via a peg and hole assembly and there is no need for any gap filling as the join is hidden by both the armour and the cloak. The lower forearm is nicely protected with some armour once more, though both are different in design. Both hands carry an axe of different designs with nice detailing to the handle, strapping and cutting blades. The hands again attach via a peg and hole assembly however, I had to trim the size of the pegs to get a nice tight fit.

Below the tunic we come to the legs, the musculature and tension to the anatomy is so great, I really like it! Harald has solid, armoured shoes with layered plates, sharp undercuts to the various straps. The fur lined leg wraps reach up to just below the knee and add to the sense of bulk with his feet squarely planted to the floor. The level of detailing throughout the sculpt is really nice and balanced, there is enough to make the figure interesting to look at but not so much that it becomes busy. 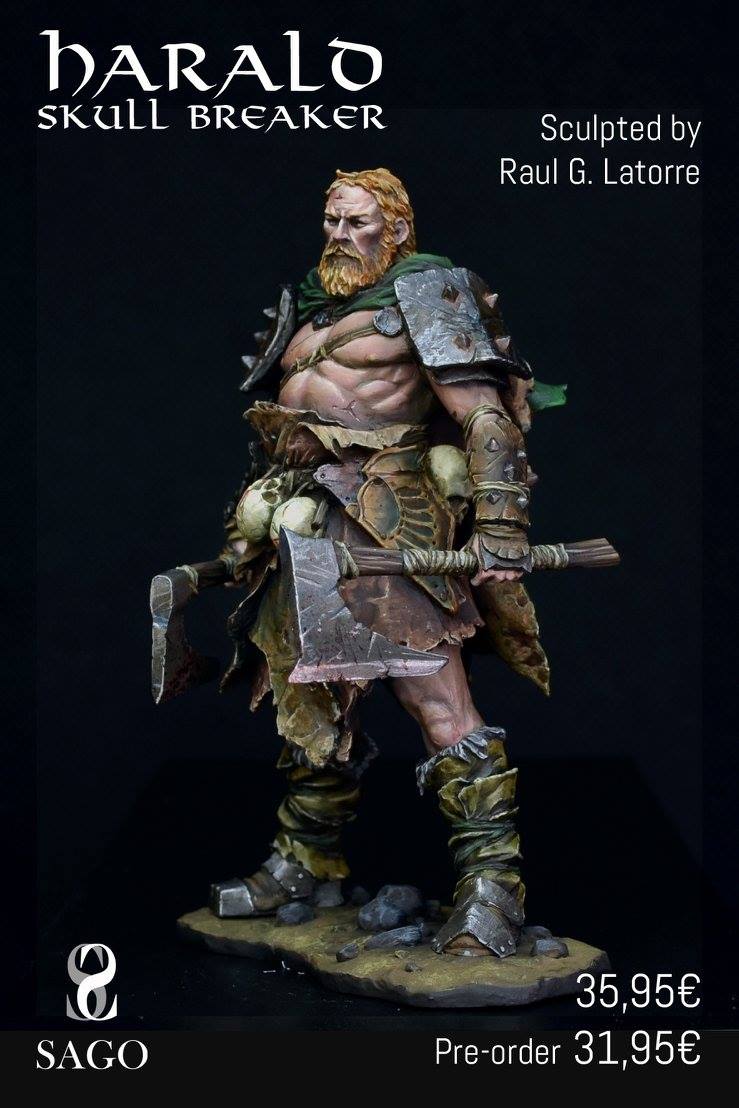 The cast is of a very good quality, the poor join to the cloak does not detract from the overall quality and preparation involved merely cleaning up a small moldline to the inside of the leg, a gap fill to the cloak, a quick wash and it is ready for the primer. There are no serious defects such as air bubble holes or casting slippages. I am very impressed so far!

The design is simple and effective, with a triangular posed figure, the spread legs and planted feet add to the sense of the warriors bulk and steadfast character. The anatomy is accurately observed with nice volumes throughout, there are plenty of planes and surface and the variety of elements will make this an interesting figure to look at once painted. This is clearly a warrior in many senses a typical one too yet it is the touch of Latorre that makes this so special. It is clearly not the most original design but his works still stand out as they are entrenched in his style. 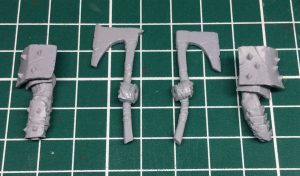 the arms and weapons

New company, new barbarian, great casting and Latorre, I can not see how this would not be a highly desirable kit. The detailing and textures are incredible and the anatomy as I have already mentioned is really nice, it helps to solidify the character that Larorre was trying to present.

At a little less than €36 after pre-order this kit offers great value for money, in my opinion they have kept costs low such as on packaging and the fact they are able to do casting in house means those savings are passed on to the customer.