A relative newcomer to the miniature market and community Altores Studio are creating quite a reputation for themselves and so it is with great pleasure I welcome them to figurementors and look forward to our long standing collaboration. The kit arrived in a sturdy white box adorned with the assembled figure but no boxart. This is a 1/24 scale (75mm) polyurethane resin figure sculpted by Yury Serebryakov, the parts come sealed in a series of ziplock bags, nestled between two layers of foam. I have to say, I was pleasantly surprised when I opened the box and first impressions are very good!

The first King of Norway, Harald Harfager or Fairhair (850-932AD) apparently reigned from 872-930 and after his death two of his sons succeeded him on the throne, Eric Bloodaxe and Haakon the Good. His life, trials and tribulations have been recounted in two poems Haraldskvæði and Glymdrápa, works attributed to Torbjørn Hornklove, the first is not complete, describing life in Harald’s Court and exists just as fragments in the Kings Sagas (stories from the 10-12th centuries about Kings and famous warriors and legends). The second poem recounts Haralds victorious battles.

Although various accounts of Harald and his life offer conflicting evidence and the readings make for a rather eclectic history it was widely considered that he unified the whole of Norway into one kingdom. 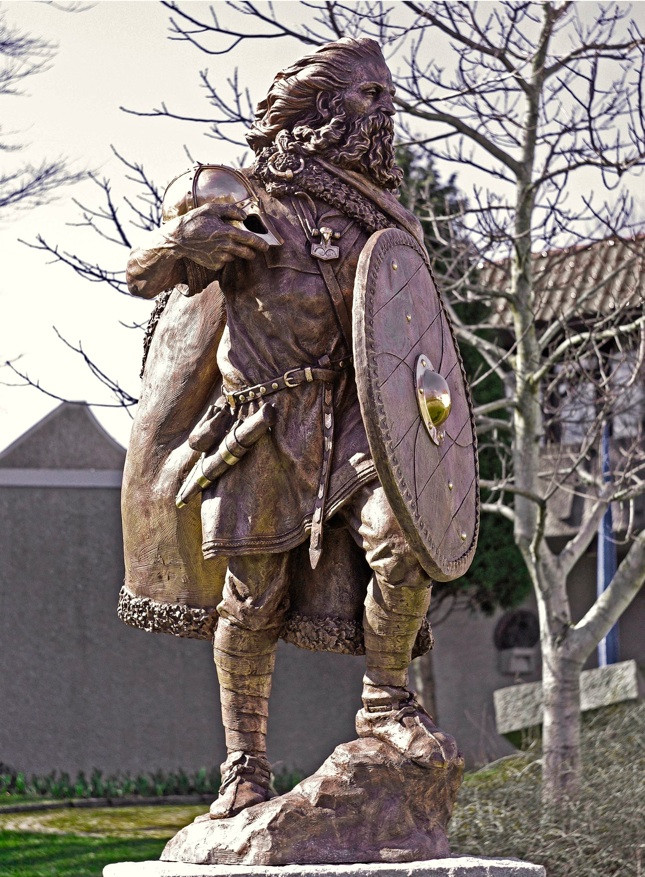 His father Halfdan the Black Gudrodarson, had amounted a network of lands through conquest and violence and on his death was succeeded by Harald. The saga of how Harald became King of all Norway is somewhat a romance, having been rejected and scorned by Gyda, the daughter of Eirik the King of Hordaland, who claimed she would not marry him until he was King of all Norway, Harald vowed to never comb or cut his hair until he was! The name Fairhair was only given after he had become King and had combed and cut his hair prior to this he was known as “shockhead” or “tanglehair”.

In 866, Harald began invading many of the smaller kingdoms which composed all of Norway, including Värmland in Sweden, under allegiance to the Swedish king Erik Eymundsson. In 872, Harald recorded a famous victory at Hafrsfjord near Stavanger, afterwards finding himself king over the whole country. However, Norway came under constant threat from without, as large numbers of his rivals, fleeing Norway had taken refuge from Haralds’ harassment (many of the chieftains were wealthy and posed a threat to Harald), not only in Iceland, but also in the Orkney Islands, Shetland Islands, Hebrides Islands, Faroe Islands and northern Europe. 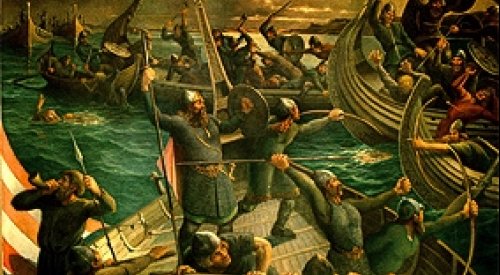 The Battle of Hafrsfjord, 872 AD was a critical battle in the process of unifying Norway under one ruler

In the earliest narrative source (Islendingabok) which mentions Harald, it notes that Iceland was settled during Harald’s reign and thus was attributed as the cause behind the Norse settlement of Iceland and beyond. The reasoning for this was that “malcontents” from Norway, who resented Harald’s claim for taxation over their lands, left and sought to possess their own land unequivocally in Iceland.

According to the sagas, the number of sons he left varies from 11 to 20. It is said that these sons caused strife and difficulties in the latter stages of his reign. Twelve of his sons are named as kings, two of them over the whole country. Each was given the royal title and assigned lands to govern as his representatives; but this arrangement did not put an end to the in fighting.

When he grew old, Harald handed over the supreme power to his favourite son Eirik Bloodaxe, whom he intended to be his successor. When Harald Fairhair reached 80 years of age he shared the throne with Eirik I, when Harald died three years later, Eirik took the throne.

Harald Harfager was commonly stated to have been buried under a mound at Haugar by the Strait of Karmsund near the church in Haugesund, an area that later would be named the town and municipal Haugesund.

The sculpt by Serebryakov is clearly a replica of the statue erected to honour Harald I at Haugesund, fully capturing the heroic pose and flowing locks of “fairhair”. The kit consists of seven parts including a rocky base. The main part shows a great consideration had gone into the design and cut of the pieces for casting, being the upper torso and head, cloak, left arm and scabbard, sculpted to the inside of the cloak. 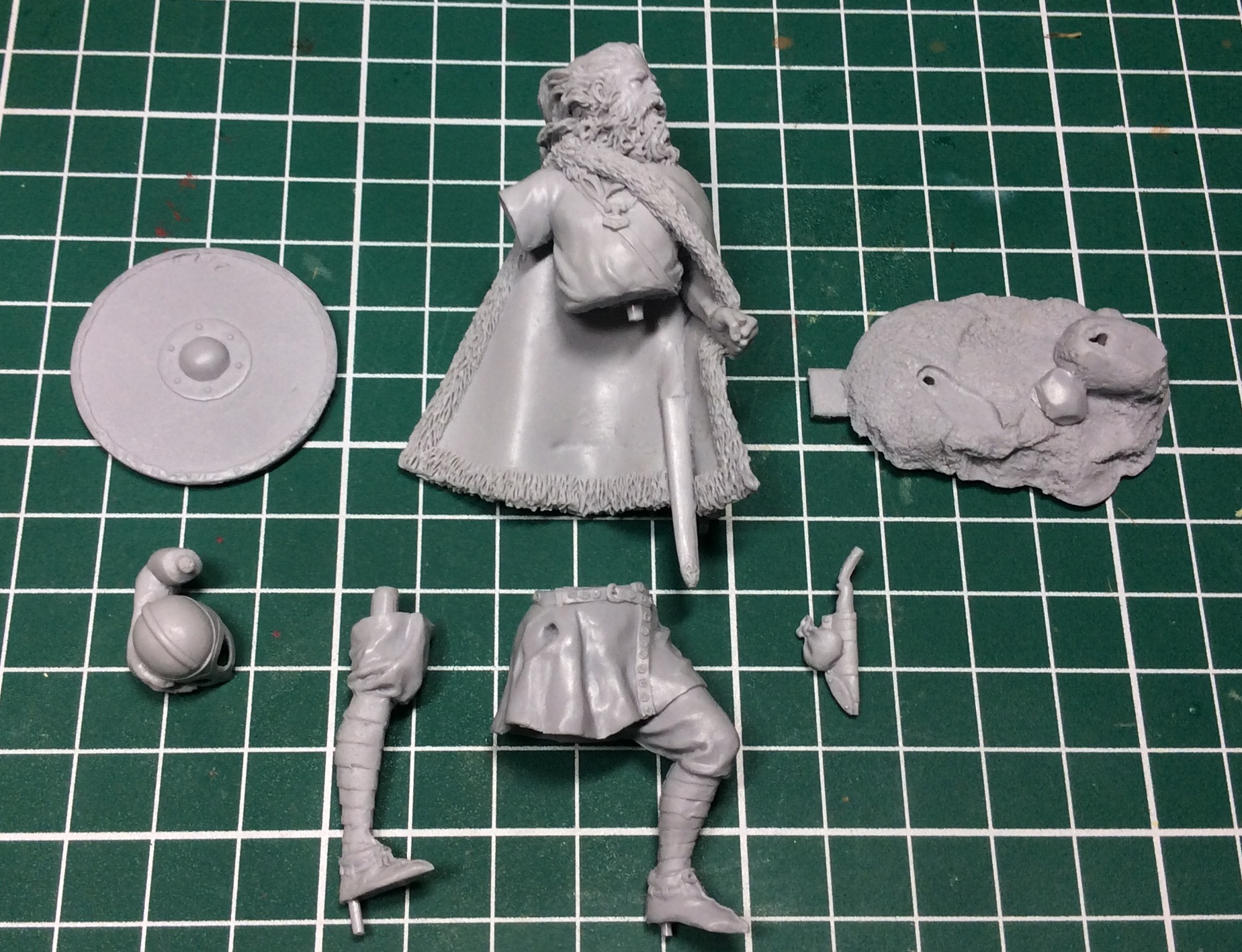 The face shows an incredible amount of detail, he looks like he has weather beaten skin, he is hawk nosed with furrowed brow, a serious and proud expression with head held high and lofty. Facial features are carefully and accurately rendered and at this scale you should be able to paint an impressive face. Due to the thickness and length of his hair and baring in mind the sagas, I would suggest this depicts a Harald prior to unifying the whole of Norway, the hair is flowing out behind him and to the left exactly as it is in the statue! 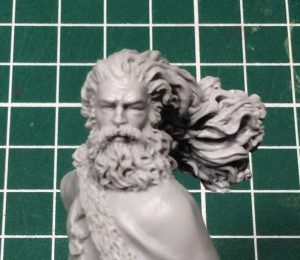 Around the shoulders we have a heavy, rough, fur trimmed cloak, thrown over the right shoulder exposing his under shirt. The cloak displays nice, natural looking folds, not overdone or stylised. The under shirt again shows nice folds and creases as it interacts with the muscular frame of our Norwegian King.

Across the chest we have a strap and around the neck we have a necklace with typical Viking jewellery (I remember painting the same item for the berserker bust from Nuts Planet), both items show nice, clear undercuts.

The second part consists of lower torso, waist and left leg which attaches snugly via a long pin and hole assembly. This piece shows a thigh length skirt over leggings, wrapped calves and ankle high, soft, laced shoes. Around the waist there is a belt showing nice details to the buckles, loops and belt ends, the skirt like item again shows natural looking folds. 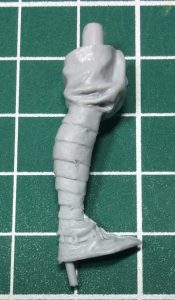 nice detailing to the calf wraps and shoes

On the right hip there is a socket to receive the short dagger like weapon and pouch. My first thought when looking at the shoes was that there was a heavy moldline running down the centre of the bridge, yet if you look at the statue, you will see this is an integral element of the shoe’s design, another sign of the attention to detail the sculptor has invested in this figure. You can even see where the laces are thread through fabric loops and cinched tight and tied in loops!

The right leg fits naturally and again via a long pin and hole assembly. There are pins in both feet which sit accurately in the holes in the scenic base, this is nice and much preferred to the wedge and slot method of affixing the figure to the base.

Clasped in his right arm we have the stunning helm, when reading about this period I came across an article on the blog ThorNews discussing why to date only one helm from this era and Viking in origin has ever been found.

Unlike so many other viking sculpts, this one actually looks particularly accurate and was called “Gjermundbu”, it was widely believed that helms were only for Kings and that these Norsemen generally wore hoods to protect themselves from the weather and helms in battle were very rare. 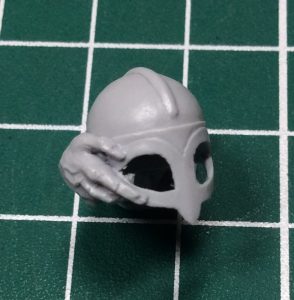 Gjermundbu helm – based on the only helm relic ever found

The helm once again matches that of the statue but the detailing is not as great and there is a horizontal band across the top of the helm missing. Detailing to the arm is very good again, showing musculature, bony wrist, finely detailed fingers and veins running close to the surface of the skin.

The shield is of the traditional variety, round, animal hide trim, a central metal boss and constructed from planks of wood. The left arm that was sculpted to the main part of the body shows the hand emerging from the edge of the cloak, balled into a fist, you can see he clenches a shield handle and this lines up nicely with the central recess in the shield.

The cast is very good indeed, no major defects such as air bubble holes or casting slippage, there are one or two areas that have short lengths of mold line but removal should be straight forward. There are one or two excess blocks of resin to remove from some parts but once again should be no issue. 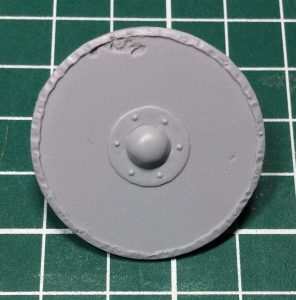 traditional shield – great for a free-hand

The kit is nicely posed and the balance to the composition is very attractive, the sculptor clearly based this upon the impressive commemorative statue. There is an air of arrogance to this character that I really like, the hair adds a sense of movement to an otherwise static pose.

The figure looks as if he is either pausing after a battle or is maybe addressing his subjects before leaving for another of his conquests to unite the whole of Norway. Having done the research on this piece, as I do with all my historical figures, I find this figure even more intriguing than before. For a man to vow not to comb or cut his hair until he had united the whole of Norway as one single nation under his command to win the love of a woman affects me in a manner in which I want to paint this figure even more.

The simple design of the shield is perfect for practising those Viking free-hands and I am particularly impressed with the helm even though it lacks certain historically accurate details (according to the statue and the helm that was found anyways). 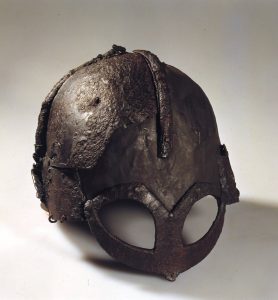 Gjermundbu helm – only surviving Viking helm of that era

The figure will obviously appeal to historical figure painters, even more so those that like these “barbarian” times. The sagas of Harald provide some interesting stories to this enigmatic figure that should provide plenty of inspiration for anyone taking on this project.

In addition, the figure is one which could easily be depicted as a fantasy warrior/barbarian. There are a range of materials and surfaces to this figure that will enable the painter to paint a variety of effects using various techniques.

Yury is a sculptor who is widely regarded as one of the best historical figure sculptors at work today and Altores Studio in a very short period of time have created a very good reputation for quality and service.

Altores Studio list a selection of distributors on their site, being from the U.K. I would order my figures from El Greco Miniatures that list it at £37.50 which I think is incredibly good value for money. In today’s economy most of us are watching our pennies but I really think this is a no brainer, indeed for a new company looking to find a place within this niche market, the price is even more remarkable.