I have been a fan of H&V range for several years so this is somewhat an honour for me to be reviewing this particular piece! They are not considered a prolific company, with a relatively small back catalogue but each and every release is of the highest standard and highly regarded within the hobby community. When Fernando Sanchez said he was impressed with the site and what we aimed to do for the community I felt really encouraged, to have his and H&V’s support is a big deal for me!

The kit arrived in a sturdy, whit box (similar in style to those of Pegaso) adorned with the box art by the uber talented and sought after Marc Masclans. The kit is cast in four polyurethane resin parts, in 1/12 scale, sculpted by Lucas Pina Penichet. The main part, the actual bust is sculpted into a plinth and the three other parts, contained in ziplock bags, all are then nestled and protected within layers of foam.

Two dwarfs as depicted in a 19th-century edition of the Edda poem Völuspá (1895) by Lorenz Frølich.

Other than modern folklore where Dwarfs or Dwarves, are described as old, incredibly short men with long beards, there is a rich, historical record surrounding Germanic origins and legends revolving around Norse mythology. The 13th century Prose Edda, an old Norse literature written by Snorri Sturlusun, describes them as “similar to maggots that festered in the flesh of Ymir before being gifted with reason by the gods”.

The Edda comprises a prologue and then three separate “books”, Gylfaginning, Skaldskaparmal and Hattatal. It was apparently written as a book of reference to help Poets understand the subtleties of alliterative verse. Alliteration from the Latin littera, meaning letter of the alphabet. It is a prose that regularly uses the first letter of a word and repeating it throughout, a good example of this type of prose is “Peter Piper Picked a Peck of Pickled Peppers”

Up to one hundred Dwarf names are mentioned in the Edda and four are given a cosmological duty of holding up the sky, they are Norori, Suori, Austri and Vestri (North, East, South and West). Dwarves are regularly associated with “death” and “metalsmithing”, in the legend of Ynglinga Saga, Dwarves guarded the doors in the mountains of King Sveigoir and translations and theories since suggest this was metaphor to the doors of another world.

The rich tapestry of Dwarven folklore, mythology and Norse legend is particularly complex and dates back many centuries. There are many interpretations of several of the more popular legends and after Christianity was brought to the Germanic peoples, tales of Dwarves were still told across the lands where German was spoken. 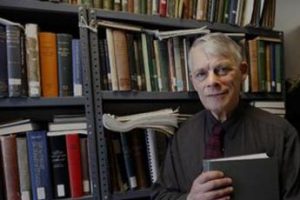 There was never any reference at this time that they were small in stature, yet Anatoly Liberman, a Russian linguist and medievalist who specialises in Germanic languages and literature, stated that he believes the Christians took the literal meaning of “Dwarves being lesser supernatural beings” as they were very short, a lot of the true meaning was lost in translation and a lack of understanding. This new ideology of small Dwarves has basically remained ever since especially within Christian folklore and was further popularised by the fictional works of J.R.R. Tolkien (1892-1973).

The sculpt by Lucas is quite wonderful and benefits from all the usual character, charm and quirkiness of his sculpting style. It is a rather simple kit to prepare and assemble, consisting of the main torso and head sculpted as one, a shield that attaches to his back, right hand and left handed that is sculpted to his rather generic Dwarven axe. Starting with the head and something I notice with Lucas on each sculpt is the amount of detail and expression he puts into the face and hands of his creations. 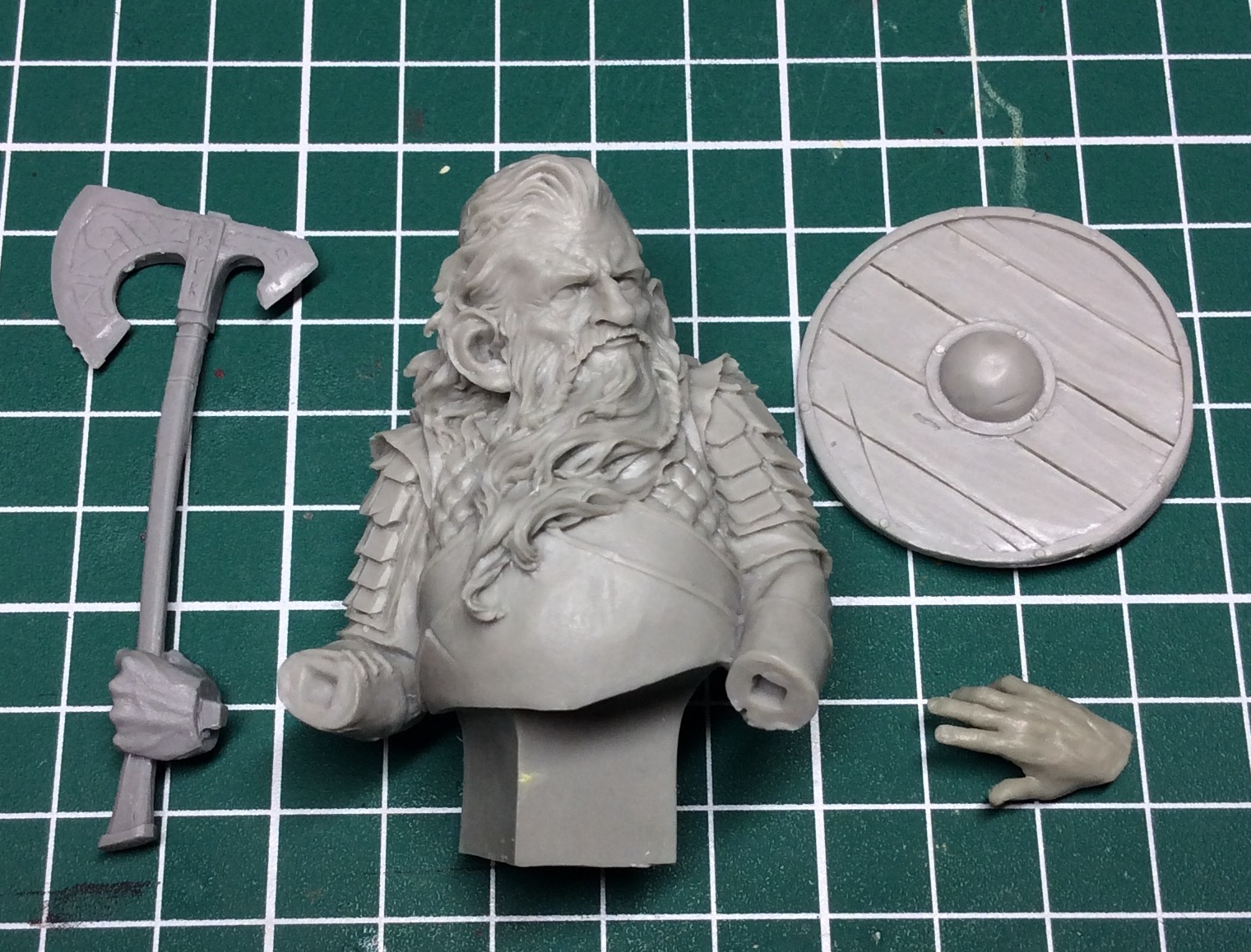 The creases and textures to the face are expertly done and the scowl reinforces the notion that Dwarves were generally considered as serious and grumpy. The hair is swept back and the central part is tied into a plait. The texture and shaping of the clumps of hair make him look in my opinion as if he is dirty and his hair is either wet with sweat or grease. Leads me to think he is either in a mine or has recent;y been involved in a skirmish or battle. 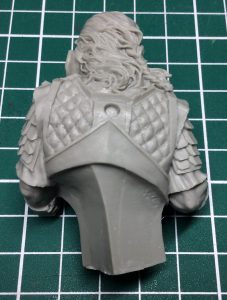 the reverse – excellent sculpting to the armour is repeated

Harald has rather large, protruding  ears, rather hooded beady eyes and a hawk nose, he looks to have steely resolve and strikes me as being particularly brave and stoic. His beard, just like his hair is beautifully detailed and rendered, showing nice strands and clumps with plaits and decorations.

The armour is nicely varied but retains balance throughout. The armour across his stomach is of a leather origin and matches the protective leather along his forearms, the rest of the armour is far more decorative.

The sleeve armour consists of overlapping plates in vertical rows and has been sculpted in such a way it eaves the painter the option to interpret it as he sees fit, for instance is it Gold, Bronze, Brass, Copper or maybe even Dragon scales? 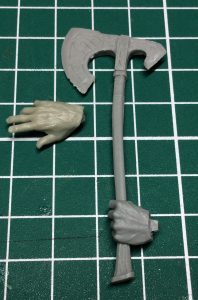 So depending on your chosen colour palette, you can choose a style or type of armour to fit. The armour scaling to the upper chest is much finer and tight fitting, similar to the scales you would find on a dragon hide, however, you could also paint it as a padded gambeson. There are nice trims to the edging of the armour providing good separation between the various elements. There are sharp undercuts throughout the sculpting of the armour.

Despite the paunch to Harald’s physique, typical of the Dwarves of folklore, you will actually see that the anatomy of the the arms is defined and muscular, proof of a hardy existence, again maybe working in the mines or as a metalsmith?

Both hands are wonderfully sculpted, showing bone structure, nails, veins, palm lines and calloused or bruised knuckles. The left hand is sculpted to the haft of the axe. The axe doesn’t strike me as particulalry Dwarven, it has a plain wooden handle, (there looks like a faint moldline along the handle that will need filing away) more reminiscent say of a wood axe, but has a rather decorative double bladed axe head, engraved with Dwarven runes. The hands both attach via a peg and hole assembly and there  is no need for any gap filling.

The last part is the shield, I really enjoy painting shields! The shield design reminds me of the Viking type, wooden planks held firm with a steel rim and a round shield boss or “umbo” in the centre made of steel or iron. The wood shows engraved grain and the rim is pegged at equi-distant points around the circumference. The detailing is very nice. 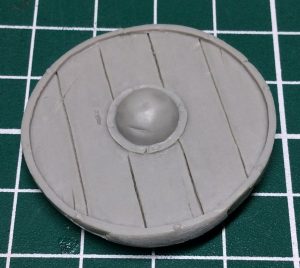 I spoke with Lucas briefly and he confirmed for me that his intention was to create a more traditional Dwarf of the sort found in the novels by Tolkien and the big screen movies of LOTR. He was given some basic key words for inspiration, H&V wanted a stoic dwarf, complete with armour, axe and shield, a hardened warrior, staring off into the distance, checking the horizon for possible enemies or intruders. I think Lucas has achieved this and more because some subtle changes to how this piece could be painted can easily transform this Dwarf into a variety of personas.

The cast is nigh perfect throughout, there are no moldlines anywhere other than a little clean up required on the sculpted plinth part. There is some tidying up to do along the outside of the shield rim, a build of excess resin needs filing smooth. There are no major defects such as air bubble holes or casting slippages.

Below you can see a selection of the WIP steps of the master sculpt.

OK how original can a Dwarf be? We have so many Dwarfs on the market, it is one of the most iconic and archetypal fantasy characters and so I guess it is nearly impossible for a figure company to resist the urge to release a Dwarf to the adoring public. Yet, as always with Lucas the kit is so much more than just another Dwarf, Lucas crams so much creativity, character and charisma into each and all of his sculpts, he literally breathes life into the sculpt. This in my opinion is why people will buy this kit, a mix of love for the Dwarf and appreciation of the skills of Lucas.

The design is well considered and the composition is balanced. The anatomy is perfect and the facial details are particularly expressive. There still remains a sense of originality to this piece as it seems to offer a diverse amount of interpretations, the piece could easily be depicted as an elder, a warrior, metal smith or even a Dwarf miner.

I have already seen some stunning painted versions of this kit displaying different colour schemes, atmospheres and lighting scenarios. This kit is highly desirable, for collectors and figure painters, fans of Dwarves and the work of Lucas Penichet. A great addition to the catalogue of H&V Miniatures.

I actually can not believe the price of the bust, at 27.30€ it represents a real value for money, the subject matter, the sculpt, cast and presentation is of the highest quality and so I believe the price is very competitive.