I am so honoured that Ju-Won Jung and Galapagos Miniatures have decided to collaborate with our site and this is the first review in what I hope will be many. I was instantly impressed with the quality of the presentation. The kit which is a 1/24 (75mm), 13 part, polyurethane resin figure that arrived in a sturdy, mahogany coloured box adorned with the boxart by Ju-Won Jung. As you lift the front flap, we are greeted with the words “open your own world”, which brought a smile to my face. Inside we find the smaller parts sealed in ziplock bags with the foam layers cut into shape to house the larger parts as safely as possible. Another nice touch was the wax stamped, art card, found underneath the bottom layer of foam along with the “liquid” base. 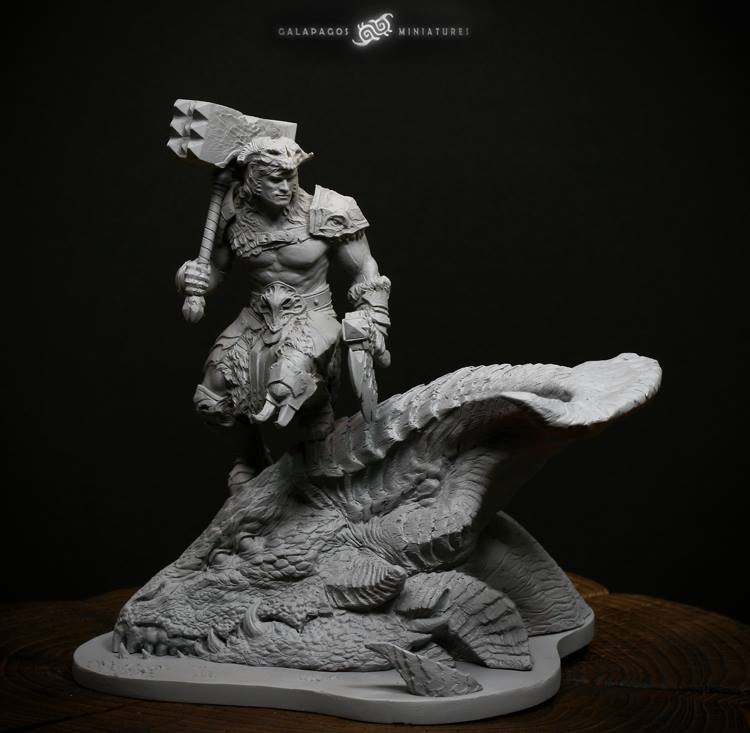 Everything about this kit on first glance is of a very good quality.

The figure is sculpted by Ju-Won Jung too and displays just how good an artist this man is, sculpted, cast and boxart! Looking at the base elements first we see it consists of three parts. A flat base with some sculpted detail to it including the sharp tipped end of one of the dragons smaller, left-hand horns. 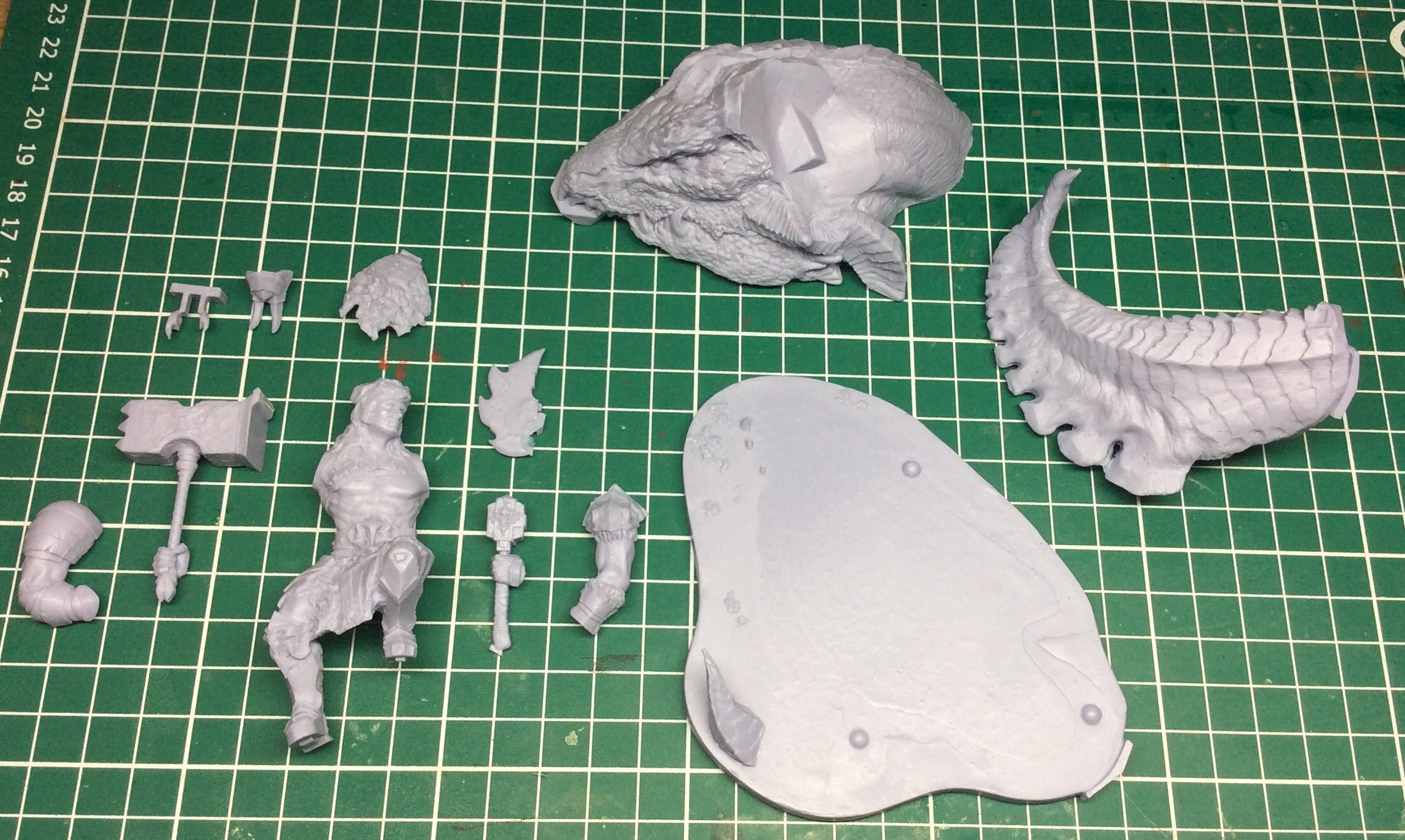 This to me hints that the scenic base to this kit is intended to represent lava or still water and when we look at the cross section of the dragon’s head again it is cut smooth as if it is immersed in a liquid landscape rather than resting upon solid ground. There are three rounded pegs to the flat base that when aligned correctly will attach to the head. 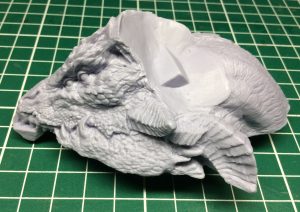 the head of the dragon – showing the various scales

The head of the dragon is wonderfully detailed and full of textures such as scales, rough skin and ridged horns. What separates this dragon or monster say to others that I have seen is how believable the design is and the attention to detail. For instance if you look closely you will that the shape and size of the scales all differ depending on it’s location and physiology.

The scales to the snout are small and delicately sculpted, closely packed and traverse around and along the softer areas of the jaws near the lip line. Then across the bony forehead, between the eyes we have another type of scale, flattened and square like of which down the centre they are seen to become an interlocking central spine that as it moves further along the spine grows larger and larger. Finally we have the sharper, more angular scales that surround the brow of the eye and the cheek. To me this realism suggests the sculptor paid attention to the scale structures of modern day reptiles. 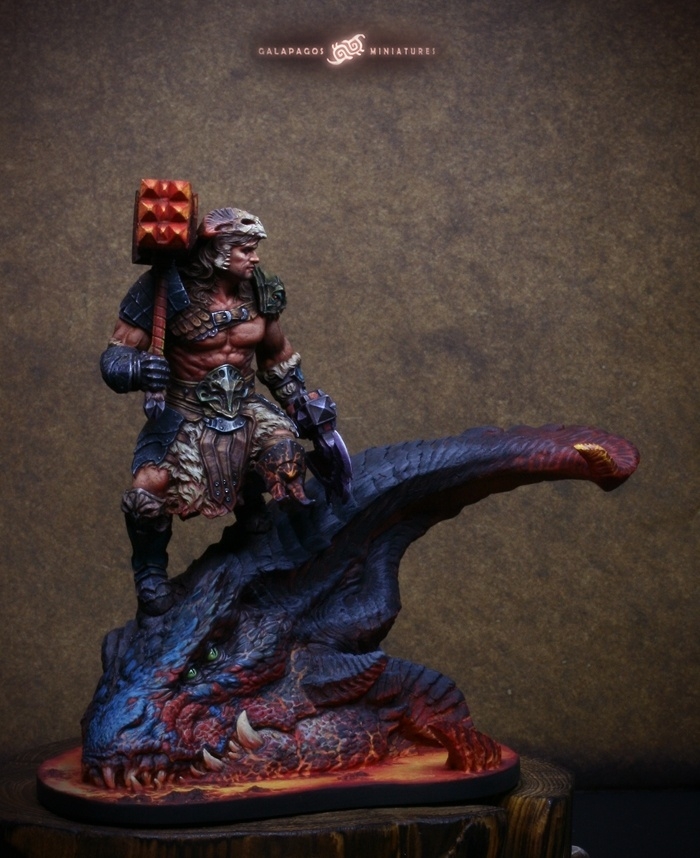 another view of the boxart 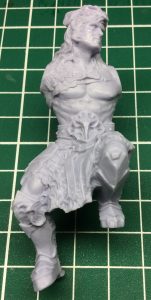 grogoth the 5th owner of the stone hammer

The dragon seems to display an overbite to it’s jaw displaying sharp, straight pointed teeth, meanwhile on the lower jaw we can see wickedly curving canine teeth. We can also see the narrow nostrils and two of the four eyes this monster possesses. The third part to the base, is the large ridged and plated horn. It measures three or four inches in length with multiple planes and surfaces and a wealth of texture and a ton of details. There is a slot upon the head for the right foot of Grogoth and another on the horn for the left foot.

The figure of Grogoth itself is again full of details, the pose is somewhat crouched as he perches upon the slaughtered beast. The main piece consists of head, torso and legs. Upon his head he wears a horned skull helm, looks similar to a large reptile or giant snake skull, with the side of his face protected by the lower jaws.

His face reminds me of those classic Conan illustrations by Frazetta complete with the smirk at the lips. The anatomy to the upper torso is one of the nicest I have seen, too often it is over stylised and inaccurate, the musculature here is much more subtle and believable.

Once the excess resin plugs are removed from the various parts, they clip into place very nicely indeed via a double pin and hole assembly. The right arm is armoured with interlocking plates at the shoulder and again around the lower arm, the left is not so armoured but does sport a very nice skull type shoulder armour. With the right arm in place, the pteruge fashioned epaulettes that are sculpted to the torso, now look like they hang nicely from under the shoulder armour. 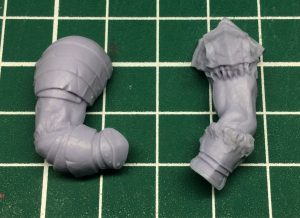 The strapping to the armour sits across the chest and goes all the way around and across the shoulder blades, nicely detailed with sharp undercuts. Around the waist we have a nice, thick belt with skull motif buckle at the front, beneath this we have the furred loin cloth, once again displaying leather pteruges.

The legs continue the dragon/monster inspired armour with interlocking plates, horns and ridges with delicate rendering to the cloth wraps around the calf. Great detailing throughout but not so much of it that it becomes too busy.At the rear we have a section cur out to accept the reverse side of the loin cloth, fit is perfect with no need for gap filling. 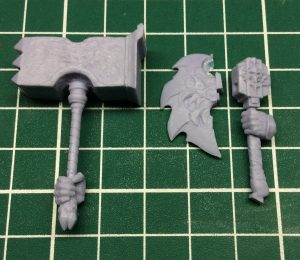 We have a small section of horned armour that is attached to the left knee and then it is just a case of attaching the weapons. The right hand carries the monstrously large “stone hammer” as Grogoth is named the fifth owner of the stone hammer, the art card found inside the box provides us with a short narrative about the legend, which acts as a nice scene setter.

This is an ornate, double headed hammer, one end is flat, the other shaped like a giant meat tenderiser, the texture and pattern to the stone head of the hammer is a nice touch and will allow you to paint some special effects. The left hand wields a stone axe, which comes in two parts, the handle and the wicked edged “flint” blade. The handle once again continues in the same style with skull motif and intricate detailing.

There were one or two soft mold lines that will need removing and other than that it is just the blocks that need removing and filing smooth. There is a block that is in a rather difficult position and that is the one under the jaw, take care not to damage the teeth when removing this, I believe this will be particularly awkward and time consuming to remove. There are no major defects such as air bubble holes or casting slippages, the sculpt and cast are of the highest quality.

I believe this is a particularly unique piece despite it depicting the typical warrior type character, this is because of the interaction between the figure and the base, the armour, the subtle musculature and pose. The design of the armour for instance, helps to tie the figure to his setting and tells a narrative to the type of life he leads, it gives the painter a lot of visual clues and inspiration. 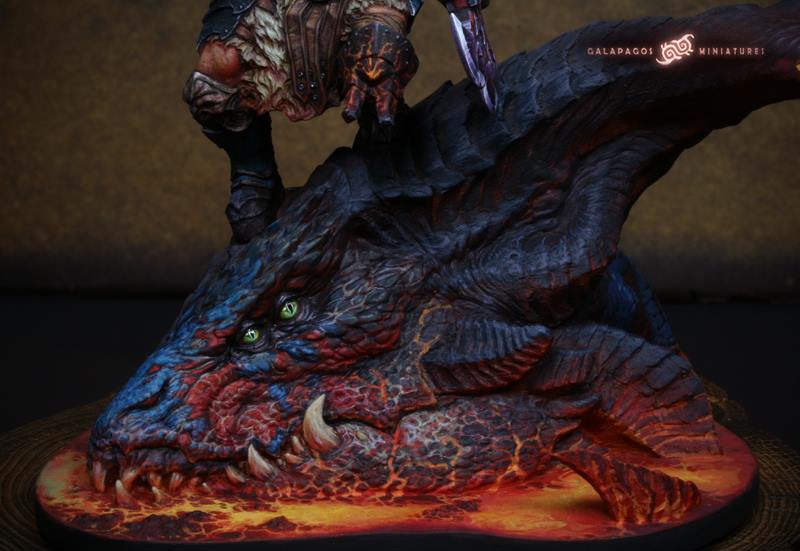 close up of the boxart, focusing on the base

The design is well considered throughout and the composition despite the kit being quite extensive and highly detailed is particularly well balanced. As someone who hasn’t painted lava or had too much success with water effects, this projects could prove quite challenging for myself and is probably my current favourite fantasy piece on the market. 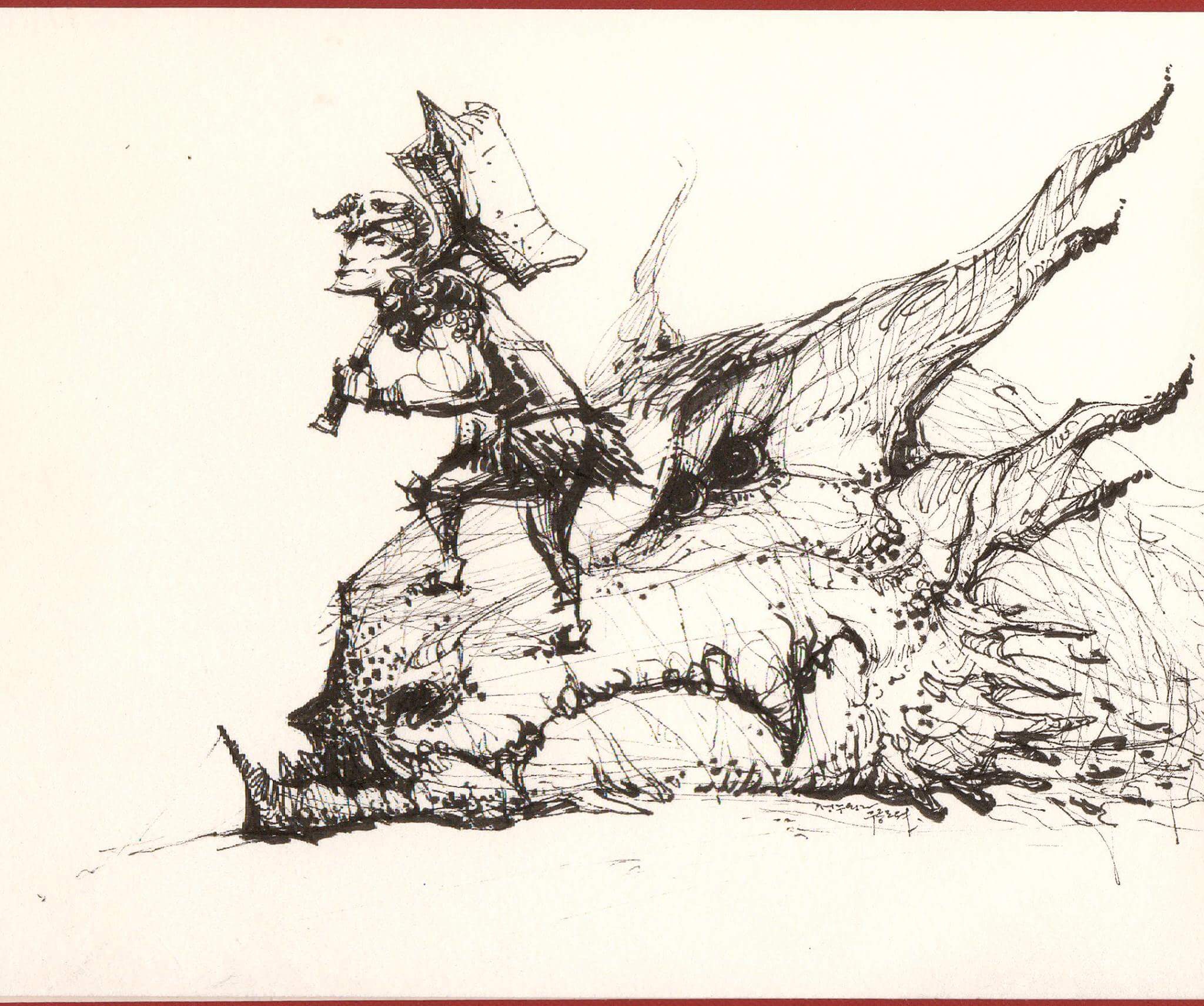 Desirability and Affordability are both of personal preference, yet at a time when muscular barbarians are as popular as ever, I believe this one is particularly impressive, it has taken all of the usual ingredients and using it’s own formula has created something more unique. The sculpt, cast and presentation all signify a top end product and I am very impressed.

At £45 I believe this represents excellent value for money, as a reviewer I see a lot of miniatures and their prices can vary, for what is on offer here compared to other miniatures of a similar price point, I believe Galapagos have a very competitive price.