Goatman is the 10th 75mm figure in Terrible Kids Stuff’s Nether Kingdom range. They also have 4 offerings in 54mm scale and 4 in 32mm scale. I recently reviewed the Orc on Wolf 75mm from Nether Kingdom here: https://figurementors.com/orc-wolf-depth-review-terrible-kids-stuff. It is a limited release of 100 copies as usual in this range. We have two box art paint jobs on this one; one by Matteo Murelli and one by John Keys. 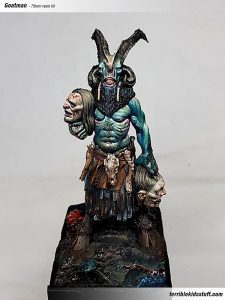 The Goatman is quite a sinister character. He is sculpted by the great Romain Van den Bogaert, so expectations are high. Goatman just stands there with a smug smile holding two cut ofF heads in his hands. What is he doing with them, why is he standing there with two heads? He instantly raises questions thereby inviting storytelling. He has this toothy, I Think both smug and goofy smile on his face, kind of like if he has just been surprised by someone taking a picture maybe, great downplayed humour here. Very unlike any miniature I have seen before.

He looks grotesque with long twisted horns, a mane of hair, goat’s hoofs and his aforementioned smile. I Think he has a lot of Character, which I also think is Romain’s biggest strength as a sculptor; conveying character and even psyche in his sculpts.

Not an easy feat, I imagine. I see this Goatman as maybe a beastman shaman of the deep forests. A sort of spiritual leader of his kind, both wise and mad. He is nightmarish and disturbing, he is the kind of monster that makes people afraid to venture too deep and alone into the forest.

Goatman comes in the usual small, sturdy cardboard box we know from TKS. This time there is no concept art on the box, I think Romain Van den Bogaert pretty much has freestyled this sculpt. It certainly has a fresh, kind of freeform creativity to it. The number of the cast is written on the back of the box. I got no 54.

The figure comes in only 4 parts; the body, one arm holding a head and both horns separately. The parts are safely sandwiched between two big pieces of foam.

He measures 74mm to the eyes, 78mm to the top of the head and just about 85mm totally with the horns mounted.

The figure is cast in polyurethane resin. Detail is very crisp and nicely reproduced. There are some mould lines and a little bit of flash here and there, which is to be expected. One mould line goes straight Down the face of the head in his left hand, this can be a little troublesome to remove, but apart from that the cast is very good. There are no bubbles. The parts fit very nicely together, with hardly any fuss about gap filling. 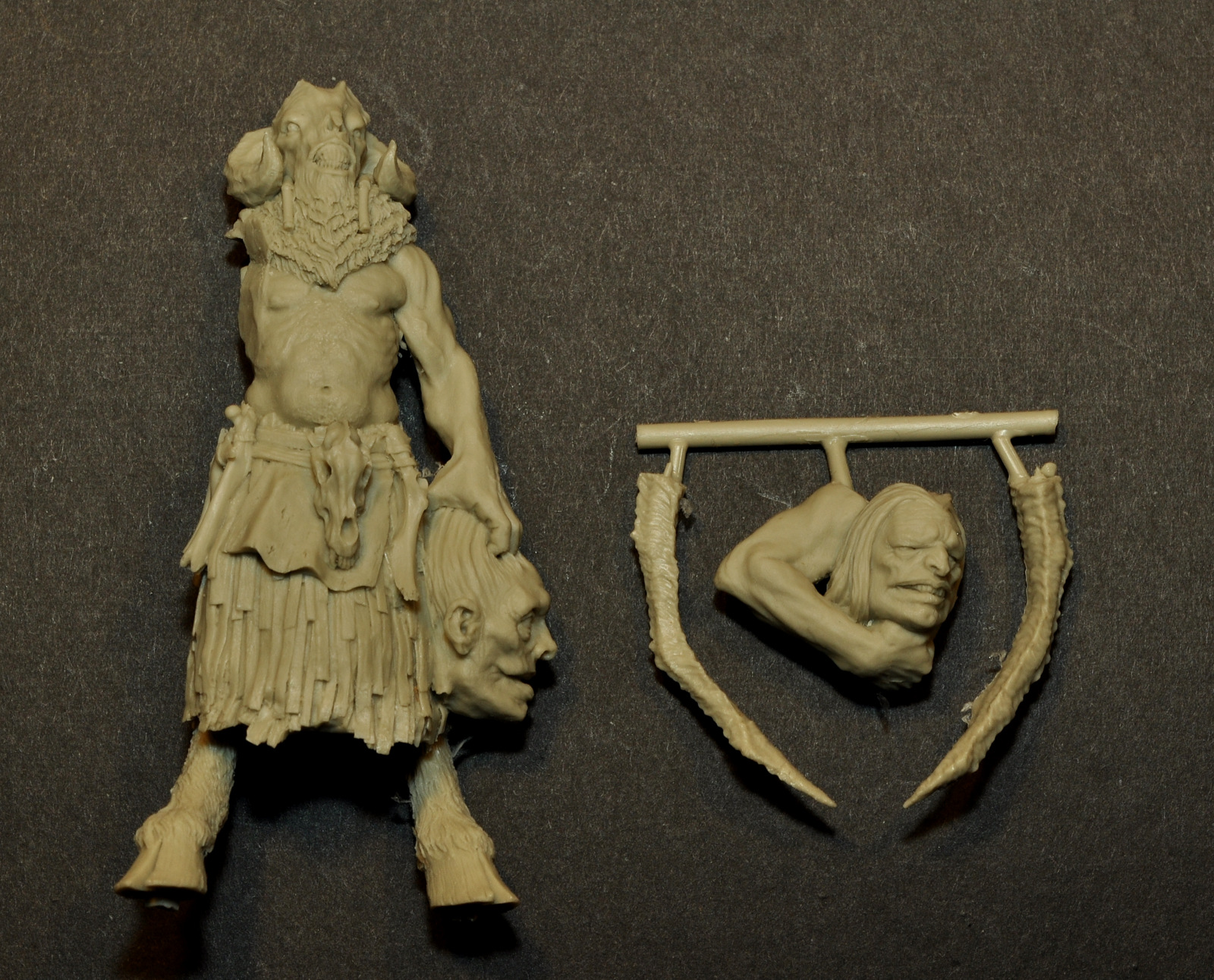 What the box contains.

The sculpt is incredible, there are so many sharp and tiny details. The hairy mane around Goatman’s head is very finely sculpted.

The heads in his hands have a lot of attention as well, looking quite expressive, despite being dead. He wears a kind of skirt, made of fine leather strips, very delicate for this scale. In his belt, he has many bone trophies, also very finely sculpted and nicely replicated in the sculpt. He wears a lot of primitive bone jewellery as well, it adds to the character and makes for a very detailed and well executed model. The goatman and his heads are full of little micro volumes and wrinkles, which really bring him to life and help create expression and credibility. I think you need a kind of relaxed approach to painting this one, letting glazes and washes bring out all this fine detail instead of trying to pick everything out in itself, that would be very demanding, I think. I am sure looking forward to try my hand at painting this fella.

This is as mentioned earlier a unique miniature. Goatman is very creepy with his strange toothy expression. Standing there with his head trophies or sacrifices, he is absolutely evil. I see him a little like a showcase miniature version of a beastman shaman from warhammer, this evil mysterious creature from the deepest and darkest part of the forest. He is a wise and magical creature of madness. He is the reason we dare not venture too deep into the forest. The design is very personal and unique, you won’t find anything like it elsewhere, I guess you can say that about most of Romain’s sculpts. 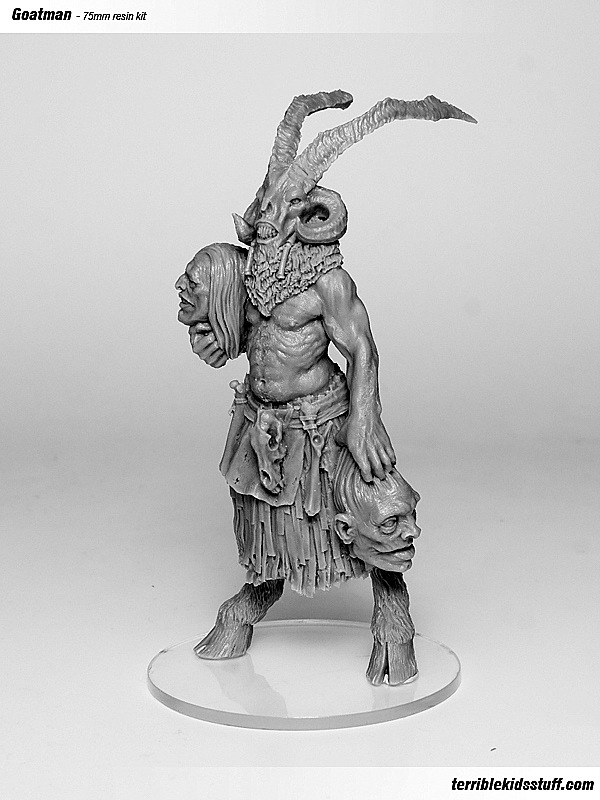 He also puts me in mind of Guillermo del Toro’s ugly monsters in movies like Pan’s Labyrinth and Hellboy, very inspiring and in my opinion representative of a style very different from what we are used to in miniature.

I have a taste for the grotesque and strange, so I am naturally in love with this miniature. This is by no means a mainstream figure and it will not fall in everybody’s taste, which is a strength in my opinion. This is a piece of art and nobody has to like it. If you like the strange and left field kind of figures though, this is just the thing for you and if you love the grotesque like I do, I am sure this unique figure is very desirable indeed!

35€ is a very usual price for a figure this size. I think it is a very reasonable price, you get a unique piece of art. It is a high-quality product, both in terms of design and cast. In my opinion, you get a lot of miniature for your money, absolutely worth it, and don’t forget you will get many hours of entertainment painting a figure like this.