I am so excited to bring you my first ever review of a Pegaso Models. I spoke with Pietro and it soon became apparent that my love and passion for wonderful figures is shared by him also: a slight understatement! For me, Pegaso are the pinnacle within our hobby, this is a company that’s been established for several decades, producing some of the very best miniatures across several diverse genres, collaborating with legendary artists and constantly pushing the boundaries of quality and raising the bar for others to follow.

This is a nine part, white metal miniature that is accompanied with a nice scenic base. It is sculpted by the world renowned Andrea Jula and arrived in the distinctive blue, Pegaso box adorned with the official boxart and sealed with Pegaso label stamp. The pieces are safely cushioned between two layers of foam and the smaller parts are contained within a ziplock bag. The figure depicts a Germanic warrior circa VIII – VI B.C. First impressions are very good, this is a kit that oozes class. 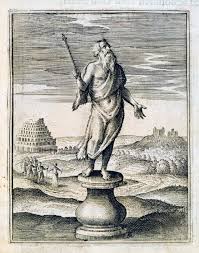 Tuiisto – God of the Earth

The Roman writer Tacitus stated that Mannus, son of Tuisto (God of the Earth) was the forefather of the three Germanic tribes Ingaevones, Herminones and the Istvaeones. He wrote of these tribes:

“In ancient lays, their only type of historical tradition, they celebrate Tuisto, a god brought forth from the Earth. They attribute to him a son, Mannus, the source and founder of their people, and to Mannus three sons, from whose names those nearest the Ocean are called Ingvaeones, those in the middle Herminones, and the rest Istvaeones. Some people, inasmuch as antiquity gives free rein to speculation, maintain that there were more sons born from the god and hence more tribal designations—Marsi, Gambrivii, Suebi, and Vandilii—and that those names are genuine and ancient”.

Mannus again was popularised in 16th century literature in the works of Johanes Aventinus, labelling him as a primeval King of Germany and Sarmatia. The tribes can be traced back to descendants of a merger between Indo-European and Northern European groups of Palaeolithic origin. 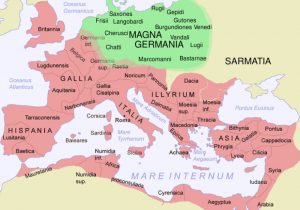 Their migration across the globe, spreading their influence reached all the way across mainland Europe and as far as North Africa by the third century A.D. Early development of these peoples saw clans (Sippen) utilise farming within their economy but maintaining their traditional customs, clothing and language.

It wasn’t until these disparate clans came into contact with the all conquering Roman Empire that they began to form a more structured Socio/political organisation, uniting the clans to some degree.

Armour was a minimal, the Cardiophilax being a chest plate made from bronze. Fetishes and necklaces were often worn, made from leather straps and adorned with beads, Amber and teeth. The Warriors would carry several weapons including sword and dagger, yet it is the heavy, dark wood club that is most iconic. 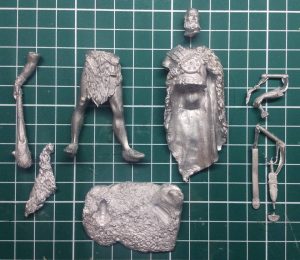 The various parts and scenic base

The sculpt by Andrea Jula is simply wonderful, the attention to detail, design and anatomy reminds me so much of the work done by Raul Garcia Latorre. The anatomy is precise and accurate, displaying perfectly rendered muscle groups .

The body comes in two separate parts, consisting of the waist and legs and the upper torso (replete with fur cloak). The belts, buckles, torques and other accoutrements are nicely detailed with sharp undercuts.

The fur is finely detailed with attention paid to the folds to ensure it looks as natural as possible with individual fur strands and clumps being modelled. There are nice grooves sculpted in to accept sword and dagger. 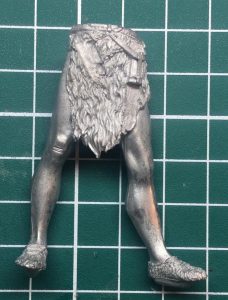 The arm carrying the club sits nicely in its joint, the join being hidden by the torque, but I suspect a little gap filling may still be required. I believe that this figure will need complete assembly prior to priming and painting. The left arm sits snugly, poking out from beneath the cloak, sculpted into the hand is the pommel of the sword which will affix to the top of the sword once glued in place.

The details to the head are nicely done with facial features depicting a confident and somewhat haughty warrior. The topknot to the Warriors’ hair comes as a separate piece but attaching it should be no issue. There’s a lot to admire in this piece and the overall composition is well balanced and works very well

The cast is very nice, there are a few very subtle moldlines, but these are so superficial it’s even possible to remove them with your finger! You can see the moldlines in question particularly down the legs in the photo to the right.

There are no other defects to the surface such as pitting, air bubble holes or casting slips and the various detailed elements are captured crisp and cleanly.

I’m a little saddened to see that the decorative part at the bottom of the scabbard has snapped in transit or storage, my idea for this is to glue the scabbard in place to the figure and then glue the broken piece rather than trying to glue the two parts together initially. All the parts fit snugly and the scenery that accompanies the figure provides a good opportunity to incorporate the piece in a more expansive scenic base. 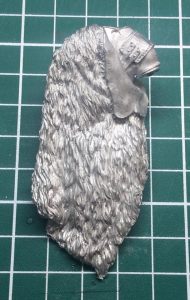 Nice detailing to the fur

For me, historical subjects such as Germanic warriors, Vikings and those of medieval era, have been and still are some of the most popular projects. I have only recently began to appreciate historical figures, as I have traditionally been a fantasy painter.

This particular figure really appeals to me and I suspect it’s because this could easily be painted as a fantasy piece, a barbarian warrior perhaps? I really like the various elements that this figure present: armour, leather, fur, skin, wood etc as they offer the painter a lot of scope to practice techniques such as realistic skin tones (they must have been cold!!), wood grain, fur patterning, stippling textures and others.

The anatomy, good design, fine detailing, crisp casting and the subject matter make this figure a stand out piece. My rather limited knowledge and research into this period confirms that this piece is historically accurate and a good representation of the Germanic clans people of that era. The figure manages to convey a fierce and proud warrior further enhancing the attractiveness of this piece as a future project. 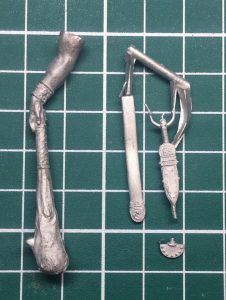 The weapons (note my broken piece)

Pegaso Models have built a superb reputation over the years and developed a massive fan base and with this piece it is easy to understand why. I believe this piece could easily bridge the gap between the historical and fantasy genres and will be particularly interesting to any painter with an interest in this period and these particular subjects.

Andrea Julas’ sculpt is wonderfully presented here, I highly recommend this piece to any figure painter. The quality of the cast and the attention to detail coupled with the clever cutting of the figure for casting reasons makes this a straight forward build.

This is a little subjective and not always easy to discuss. Italy are however subject to quite high taxes and this will need to be factored into the price also, which is one of the reasons that Pegaso Models offers 5, 10 or 15% discount on their site dependant on the size of your order. However, I believe for a 75mm figure of this quality, the price is extremely competitive and fair. In my opinion these figures are for those painters who wish to improve the skills and knowledge (becoming a better painter) and those who wish to present the figure as a complete project for the competitive show circuit, with that in mind the price point is spot on.