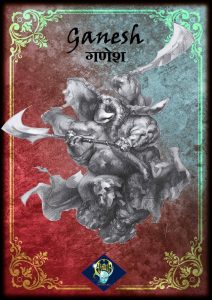 The latest review sample from my friends at Aradia arrived in its usual clam pack presentation adorned with the monochrome concept art by Stefano Moroni. This is a rather complex build, with fifteen polyurethane resin parts, the kit is sculpted by the master of creature creating Allan Carrasco. The kit stands about 80-85mm in height so I’m guessing a monstrous 75mm scale. First impressions are very good, what a beast!

Our rampaging elephantine hero is clearly inspired by Indian religion and Art and the title Ganesh is surely another nod towards Ganesha. Ganesha has been represented as a pot bellied, elephant headed man for as long as Art has existed in Indian culture.

Sometimes it was depicted as having five heads, often with less. He was shown as having only one complete tusk and thus in early history was known as Erkadanta (one tusked). There are many stories and some debate over whether it was born with the head. 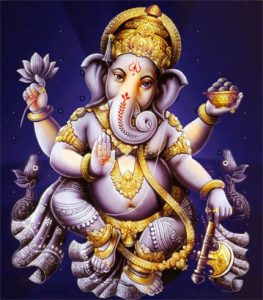 One of several interpretations of Ganesha

One that recurs through the ages is that Ganesha was created by Parvati, the Hindu goddess of fertility, love and devotion, from clay to act as some sort of protector. Shiva “The Auspicious”, felt that Ganesha was coming between himself and his wife Parvati and so beheaded their son and replaced it with an elephants head and so as to destroy any beauty also cursed it with a sagging belly. Other stories talk of Parvati creating Ganesha directly from her laughter.

The “Dharma” or task in the grand theme of things of Ganesha, is to place and remove obstacles, it is his particular territory, the reason for his creation. As I have already mentioned there are various stories, myths and versions of his creation yet it is widely accepted he is the son of Shiva and Parvati and brother to the God of war, Kartikeya.

What can we say that hasn’t already been said about Allan Carrasco and his ability to create believable yet fantastical creatures!? He continues to set the bar and his attention to anatomy is second to none. Muscle groups, textures, details such as the wrinkles and veins all show a study in form and an understanding of pose and movement.

The main piece is the torso and legs and the traits described in the literature about Ganesha are all present, however Allan has taken it a stage further with any human characteristics being totally removed. 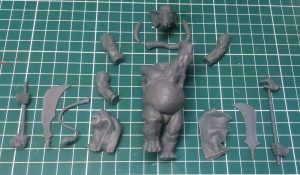 Ganesh is posed in a dynamic manner, right foot slightly lifted and tilted forward at the start of a charge. His four arms held aloft, wielding his mighty two handed scythe like weapons.

There is a bead necklace sculpted to the front of the torso, trailing down over the chest and sitting slightly upon the apex of his barrel like stomach. The head fits nice and tightly and sculpted to the back of the head is another length of necklace, the two parts lining up perfectly. 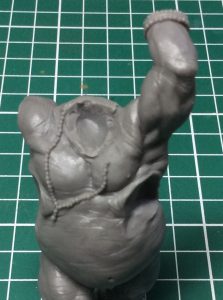 The head is nicely sculpted with the smaller ears of the Indian elephant and with that all too familiar sad and emotive look to its’ face. The lower length of the trunk is a separate piece, I’m assuming to make painting of the chest and stomach area easier, although usually I prefer to build my figures completely before painting.

The two tusks will require fitting too and dry fitting shows this could be a little tricky, it may even need to be pinned into place as the recesses for them don’t seem deep enough for them to fit snugly into a natural position. The three arms that require attachment line up nicely, maybe a small amount of gap filling may be necessary but nothing too strenuous. The tail finishes off the build of the anatomy nicely.

Putting the weapons together could be quite tricky, I removed all the casting blocks from the pieces so as you can see the parts more clearly, I noticed that the ends of the weapon haft have no definitive edge for the blade to attach to. 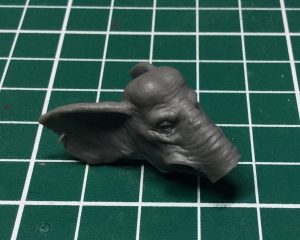 The head with the smaller ears

So I will need to file smooth, flat and level the end, drill a small hole, add a pin and do the same for the blade and attach them this way, otherwise the parts could be too unstable and insecure.

The two pieces of loincloth, look great, no tatters or damage,these are clean, smooth and rich, as befits an Indian God. There are deep folds and an exaggerated flow to them that perfectly captures the movement of the whole piece.

The cast is very good, I did remove all of the casting plugs prior to taking photographs because it would make it easier to see the actual parts.

Where the plugs were removed will require filing smooth and there are a couple patches of flash and one or two minor moldlines but nothing extensive. There are no slippages or air bubble holes and the parts all go together very nicely. 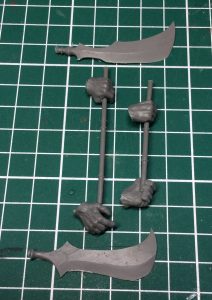 Attaching the blades may be a little awkward

Aradia are known for their original designs, taking influences from instantly recognisable sources and giving them their own twist, their own stamp on a fantastical world they continue to develop with each and every new release. The piece is well considered, showing all the traits of good design, the main tenet being hat everything works, there’s no redundancy in the design.

The anatomy works perfectly, there’s no weird joints or inaccurate muscle groups and the other mistakes we frequently see when sculptors create fantastical beasts. Our “hero” is incredibly dynamic without the pose looking forced and the overall balance and design is grounded in reality with those little twists that just complement the figure perfectly.

For us painters who predominantly paint fantasy, there aren’t many companies out there that I look forward to new releases quite as much as those of Aradia, even more so when the sculptor is such a legend! Moroni the concept artist, Carrasco the sculptor and Calvo the box artist.. what a collaboration.

At this size and quality the price tag of €50 seems particularly reasonable (even more so for a Carrasco fan like myself). Pricing is always objective, you either think it is worth the money or not. This seems the going rate within our community and I for one am happy to pay it.

Thanks to Stefano, Federico and Marco for their continued support in my endeavours and for the review sample, check out their site HERE!