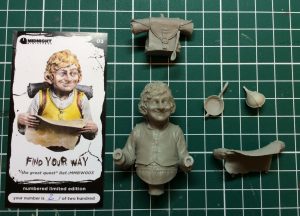 The kit and boxart

Following on from the success of Midnight Miniatures first two, full figure releases (Crush your Enemies and Massive Madness), we now have “Find Your Way”.

This is a limited edition, five part, polyurethane resin bust sculpted by the incomparable Luca Piña Penichet. It arrived safely in a clamshell pack, the parts inside a ziplock bag nestled between two layers of foam. Inside we also find the certificate and box art painted by Marc Masclans. The featured image depicts the paintjob by Enrique himself.

The sculpt is stunning and full of so much charisma. One of the main attractions to Luca’s sculpting style is creating endearing characters. The majority of the bust comes in one piece with just hands, backpack and accessories needing quick and simple assembly. 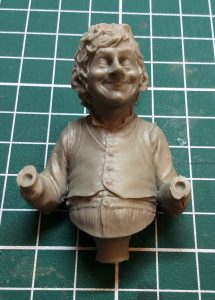 We are constantly told how important the face and hands are in any sculpt and Luca pays particular attention to these areas. The facial features are wonderfully sculpted, capturing the mischievous and adventurous nature of the hobbit. The hair has some really nice textures with flowing, curly locks.

The shirt has nice seams and the collar has good definition and undercut. The waistcoat is a nice piece of sculpting too with nice buttons and “bordering” around the neckline. There’s a hint to the shirt creases under the waistcoat which is a subtle touch and testament to the quality of the sculpting.

There’s an element of charming comedy to the sculpt too with his suede/corduroy trousers hiked up high over his waist.

The hands holding the map are fine and delicate and connects via a peg and hole assembly to the arms of the bust, no gaps when dry fitted! The map is thin and worn which means when painted will look authentic and to scale. I have seen some nice figures ruined by books, scrolls etc that are way too thick! 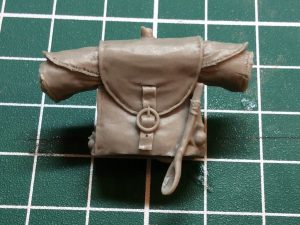 All packed and ready to explore

The backpack is attached by a large square peg and displays the same quaint styling as the hobbit itself: nice detailing, textures and undercuts. The wooden spoon, canteen and cook pan also contribute to tell the story of our hobbit as he begins “the great quest”.

The cast is pretty much impeccable, there’s a small moldline near the base of the bust and the edges of the map will need gentle smoothing and that’s it! A wonderful sculpt and casting to match. There are pegs to the map and accessories that will need clipping and filing smooth. All the details are captured sharply and various straps and buckles etc all display nice undercuts.

There’s nothing truly unique about the genre however, I don’t recall seeing many hobbit busts. The design has a typical quirky and endearing feel to it , so reminiscent of all of Luca’s previous projects. He has this amazing ability to inject a warmth and human touch to his wonderful characters. Every piece that Luca has created to date encompasses good design and his style screams originality. 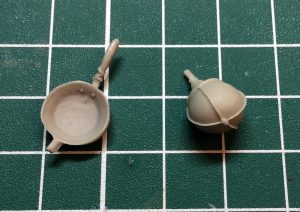 Enrique aka Emuse Studio is an incredibly talented artist and has now established Midnight Miniatures as one of those companies whose new releases are eagerly awaited. Luca’s work is always incredibly sought after, I’m still sulking from not getting my hands on his three witches release (although I do have a copy of his now legendary Baba Yaga). This is a cast limited to 200 copies and I don’t think they will be around for long.

I believe that the price point for this piece is fair even though there are companies releasing larger busts for just a few pounds more; I feel that the quality of the sculpt and cast along with how much people value the work of Luca, makes the price fair and competitive. I’d highly recommend this bust to anyone and suggest not waiting too long to get one!