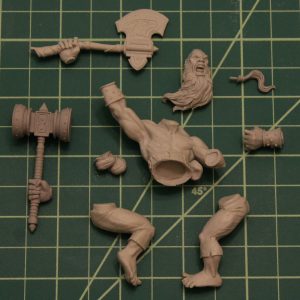 Terrible Kids Stuff have come back on the scene with a bang. After a long break, they’ve released five new limited edition figures in the past month.  We’ll be reviewing two of them.  The first, Einan, is a 75mm scale dwarf riding a charging boar. 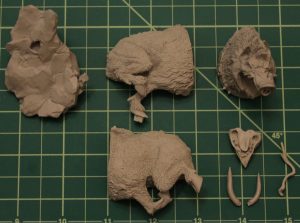 Contents of box 2 of 2: Boar and base

Upon initial inspection, this figures is a great fantasy piece.  Dwarf boar riders have shown up in a variety of fantasy works, from games like Rackham’s Confrontation to movies like The Hobbit: The Battle of the Five Armies.  However, a closer look reveals there is more to the piece than that… 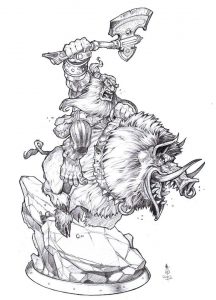 The original concept art for the piece was done by Roberto Cirillo.  However, the character itself is a reference to one of Paul Bonner’s famous works for Rackham.

The sculptor for this piece, Joaquin Palacios, had previously created a diorama of ‘Borderlands’ for the Museum of Miniatures (MuMi).

In that scene, a dwarf boar rider has been ambushed and killed by a group of orcs and goblins.  This piece acts as a bit of a prelude to that scene.

The dwarf is very much alive, charging down the slopes on his boar with axe (or hammer) in hand.  Perhaps this represents the very moment before he is struck down by the goblin’s rifle. 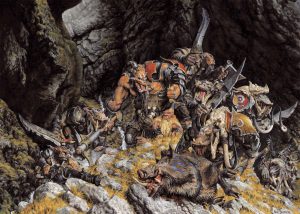 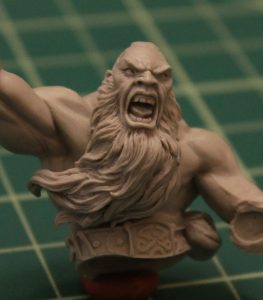 This piece consists of both a wonderfully rendered dwarf and a fantastic sculpt of a boar.  The action captured by the sculpt is undeniable.  The boar charging down a slope and the rider, mid yell with his weapon in the air, make this an incredibly dynamic piece.

The faces on both the dwarf and the boar are extremely well done, though I’d expect nothing less from Joaquin Palacios. The anatomy of the dwarf, though stylised, appears very realistic.  The muscle groups on the dwarf’s arms and back are accurate and well defined.  His chest and stomach are also well defined, but most of that is hidden by the beard.

The figure comes with two weapon options, an ax and a war hammer. The ax is a bit more ornate and will probably be the more popular choice, though the hammer will certainly appeal to people as well.

The kit is a very clean cast with minimal mold lines. Cleanup should be very quick and easy.  The pieces fit together well.  The main body of the dwarf comes in three parts that go together easily with just a small seam visible down the back of his pants.  The bracers hide the seams where the hands attach, so those will go on easily as well. 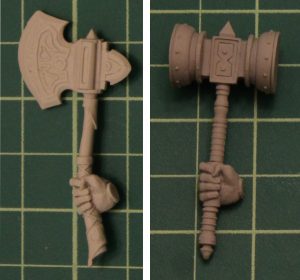 The main body of the boar comes in two halves, with the head and jaw as separate pieces (along with a separate tail and two tusks).  As is common with mounts (boars, horses, etc), there’s no way to hide the seam running down the centre of the body.

However, both sides of the body and head fit together well, without significant gaps, so filling the seam should be easy.  The fur texture on the boar is expertly done and it should be useful in disguising the fill for the seam around the body.

One leg of the boar makes up the entirety of the figure’s attachment to the base.  The lightweight resin of the figure means that the peg under the hoof should make this more than sufficient.  However, care should be taken during handling of the piece (once assembled). 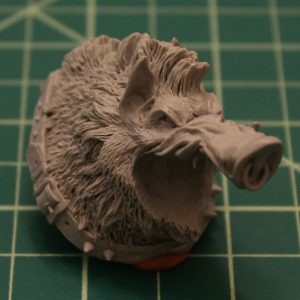 snarling head of the boar

It will most likely be easiest to paint the dwarf and boar separately before permanently attaching the rider.  But, each can be fully assembled independently without causing any troublesome obstructions for the painter.

This works is a neat variation on a figure from a famous work of fantasy art.  It makes reference to the work, without directly copying from it.  If we take this as simply a fantasy piece, without the link to Paul Bonner’s art, you’ve still got a wonderful example of a dwarf boar rider.  While there are other dwarf figures on boars, they tend to be 28mm gaming pieces.  This is the first example of this kind of figure in a larger scale (75mm) that I’m aware of.

The design is relatively simple with no ornate armour or fanciful clothing.  But the exposed skin on the dwarf almost begs the painter to add tattoos or war paint to the figure.  This give the painter more opportunity for creativity and to create their own unique version of the piece. 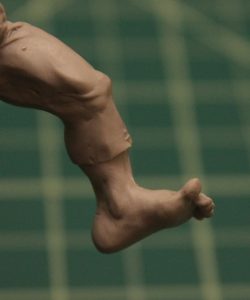 I also love the little details, like the upturned toes.  Every part of this piece seems to have a lot of character to it.

This kit is the work of an extremely popular sculptor, Joaquin Palacios, and references the art of one of the most popular fantasy artists, Paul Bonner.  Either of those would help to make this a desirable kit.  On top of that, it’s a limited edition kit.  I don’t expect copies to be available for much longer, so get it while you still can!

Comparing to similar figures is not easy.  Technically it’s a mounted 75mm figure, but a dwarf is smaller than a human 75mm and the boar is smaller than a horse in that scale.  Perhaps a more fair comparison would be to a traditional 54mm mounted kit.  But, even there the price still seems very reasonable.  I definitely think this is a good deal for a figure like this.