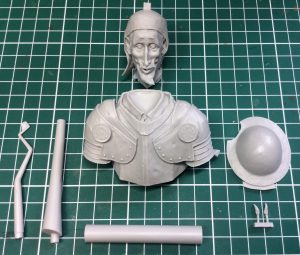 My kit arrived in its’ now customary, sturdy blue box adorned with the box art by Myeong-Ha Hwang, the rear panel also shows three additional views of the boxart. This is an eight part, polyurethane resin kit, traditionally sculpted by the insanely unique and talented Romain van den Bogaert.

This will be a relatively straight forward build, of the eight parts, two are sections of moustache and another two constitute the lance. The parts come nestled between layers of shaped foam, with the smaller parts in ziplock bags underneath.

This new bust from NutsPlanet is based on the famous character from the Spanish novel by Miguel de Cervantes Saavedra. Don Quixote, is a rather lowly nobleman whose real name is Alonso Quixano who over time had read so many romantic and chivalrous novels he loses his mind. He had a huge library of books, he would sell his belongings and farmland to buy more. In fact there is quite an integral part of the book where his friends burn down the library and claim the damage was caused by a mage. 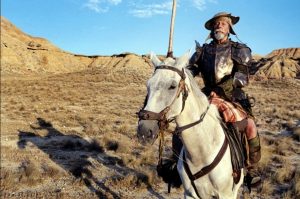 Our “hero” as betrayed in one of many adaptations

He eventually sets out on an epic journey to revive chivalry, right wrongs and bring justice to what he saw as an ever increasing unlawful populace. He travelled under the name of Don Quixote de la Mancha, along with his “squire” Sancho Panza, a humble farmer.

He mounts his old horse Rosinante and accepts his knight errant title, when he swears his service to a farm girl who he calls Dulcinea del Toboso. A case of mistaken identity means he is knighted and so off he goes on his adventure, with rusty armour, makeshift helm and lance.

The story has been presented as a series, opera, musical, stage show and in film. It has also influenced other films, based on the events of the book, for instance the 1972 movie, Man of La Mancha.

There is a wealth of images and Art too, some of the most telling being those by one of my favourite artists Gustave Dore, whose Art from Dante’s Inferno (the book not the game, you charlatan!) adorns my arm in ink! 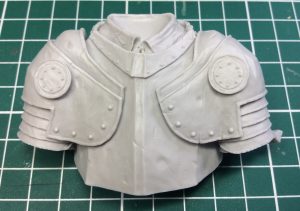 Who else would they have possibly collaborated with to sculpt the charismatic and ever so deranged  Don Quixote? Romains’ unique style perfectly fits this project.

The largest pieces are the torso, head and helm. Beginning with the torso, his armour, his pride and joy, is sculpted with dents, cuts and scratches, battered and worn. Although the style of armour doesn’t exactly match any images  I have seen of Quixote and his armour, Romain has used his artistic licence and produced something believable, comic and fitting. The helm is spot on.

The studding and trimming are nicely done but minimal, leaving large open spaces for you to go to work on. The idea of using various rust techniques and products is quite appealing and should make for a fun paint job.

The head is where the sculpt really comes to life, imparting all the Don Quixote traits and characteristics. The skinny, saggy face, with wrinkles, laughter lines and wide open, manic eyes, make the sculpt, even through its, comic/caricature style, instantly recognisable as our man from La Mancha. 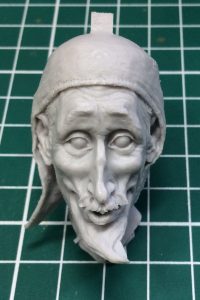 Stunning details to the enigmatic face

In addition, attention to details such as the pouting lips, straggly wisps of his beard, high cheekbones and arched eyebrows, further accentuate the comedic value of the sculpt. There is nice texturing present also to the soft skullcap that fits under his helm. Talking of which the helm looks every inch just a plain old barbers bowl and the nick out of the side is another nice touch. The subtle texturing keeps this piece in harmony with the battered armour.

The moustache pieces look they will be fiddly to fit and the lance comes in two parts, they fit nicely up against the armour, I would recommend pinning and gap filling the two pieces, then filing smooth. Again the lance is old and decrepit, the zip zag point, continuing the quirky, comic theme.

The cast is first class! There are no defects such as slippages, air bubble holes or moldlines. The only preparation will be the removal and filing smooth of the resin plugs present on most of the pieces. Take particular care removing the plug from the rim of the helm, as you run the risk of snapping or damaging the delicate edging of the helm. 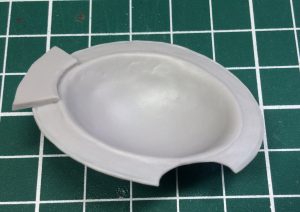 The bust is of the more classic variety, head and shoulders only, balanced and well considered, even the lance does not detract from the main focus point of that enigmatic face! Romain is fast becoming regarded as the number one name in our community for his unique sculpting style and it fits perfectly with the character of Don Quixote. This is in my opinion a particularly unique and original bust.

NutsPlanet are establishing themselves as a major player in our hobby and their releases are eagerly awaited, couple this with the subject matter and Romains’ incredible sculpting ability and this piece is highly desirable.

There are a wealth of painting opportunities with this piece, the textures and worn and battered feel to the armour and helm will offer us the chance to get imaginative with techniques such as weathering, rust and patinas. Then we come to that incredible face, crazed but lovable.

At $60, I feel the price point is fair and competitive. The quality of the sculpt, cast and presentation are all first class and make this a premium product with a reasonable and affordable price. Highly recommended!