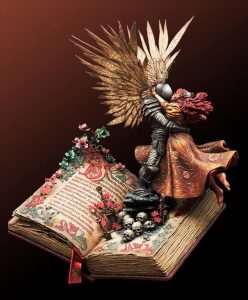 If you do not know the work of Michael Kontraros yet then you have missed out on some incredible creations. Michael is an award winning sculptor whose collaborative projects with Kyriakos Simos are some of the most haunting, imaginative and beautiful pieces currently within our hobby.

This year his piece titled “Atonement” won best of show around Europe at Euromilitaire, Scale Model Challenge and at Crystal Brush in the States.

His commercial pieces are also held in high regard for their innovation, creativeness and imagination. The latest offering is Deputy Betty, depicting a steampunk, female deputy of the law. It is a 75mm scale kit comprising of four polyurethane resin parts, which is surprising when you consider how detailed this kit is. It is traditionally sculpted by Christos Panagiotopoulos and arrived as is now customary in its metal tin adorned with the box art, also by the sculptor.

This kit is currently available through a crowd funding campaign over at Indiegogo, it has already funded so this subject will definitely be produced. You can see the campaign HERE and check out the other money saving options too. 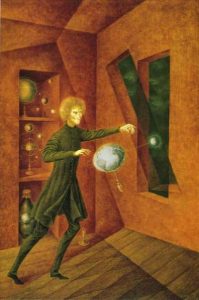 phenomenon of weightlessness by Remedios varo

Steampunk is a subgenre of science fiction/fantasy that incorporates technology and in vogue designs to create an alternative universe (frequently set in the Wild West or Victorian England) where steam power has become the prevalent or only surviving technology.

The term was first coined in 1987 and refers generally to anachronistic technologies (i.e. those misplaced in the wrong time frames or suffering chronological inaccuracies), although the concepts and ideas were born from the works of authors such as Mervyn Peake, H.G. Wells and Jules Verne many years previously. Indeed the artwork by the fine artist Remedios Varo (1908-1963) combined elements of Victorian fashion, fantasy and retro technologies.

Steampunk was coined by the science fiction writer K.W. Jeter, author of Morlock Night, in a letter to Locus (The magazine of The Science Fiction and Fantasy Field):

Enclosed is a copy of my 1979 novel Morlock Night; I’d appreciate your being so good as to route it Faren Miller, as it’s a prime piece of evidence in the great debate as to who in “the Powers/Blaylock/Jeter fantasy triumvirate” was writing in the “gonzo-historical manner” first. Though of course, I did find her review in the March Locus to be quite flattering.

Personally, I think Victorian fantasies are going to be the next big thing, as long as we can come up with a fitting collective term for Powers, Blaylock and myself. Something based on the appropriate technology of the era; like ‘steam-punks’, perhaps.

Our kit depicts a character from American Wild West crossed with steampunk tendencies such as clockwork parts. We could get really into the whole steampunk background but let us now move onto the figure! 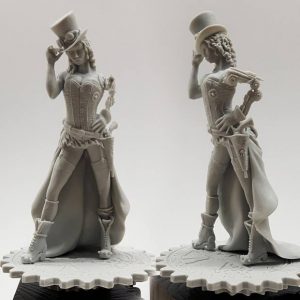 Deputy Betty stands about 90mm from heel to top of her hat and is as simple to assemble as it is aesthetically beautiful! The skirt sits naturally on her hips and her cyberpunk/steampunk left arm simply attaches to the shoulder via a peg and sits snugly into her glove sculpted to her hips. Then it is just a case of slotting her onto the cog base.

Our heroine is lithe and curvy without being portrayed in the usually oversexed manner and the fine detail is very nice. She is portrayed wearing the clothing reminiscent of cabaret girls and ladies of that era, with cleavage revealing corset, stockings and suspenders.

The hat is a nice shape with the intricately detailed goggles nestled just above the wide brim. Beneath her hat we have nicely textured, semi curled locks of hair that fall down and settle on her shoulders. Her face has delicate features and a full, pouting mouth. The anatomy looks perfect and well considered.

She is posed, tipping her hat, legs slightly wide in stance, left arm resting high on her hip. She has an air of authority yet is also rather sexual and attractive. The level of detailing to the bodice/corset is insane with nice trims, buttons, lacing and ribbing. 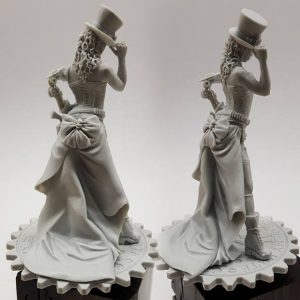 stunning folds to the skirt

The high slung belt for the holster has sharp undercuts and crisp details. The stockings are clearly sculpted and separated from the thighs of her legs and again the suspenders benefit from sharp undercuts. The knee length socks add another level of layers and textures with one up and the other folded down and crumpled.

The boots are great, quite large, practical yet again with an air of sexual fetish to them, demonstrating nice details to the laces, straps and button holes, the open top of the boot helps to keep everything balanced.

The skirt frames her physique nicely, softening her silhouette and will offer the painter a wonderful canvas, the folds and flows are sumptuous yet not over done. The large bow is a nice touch and adds to her feminine beauty.

The base is simple in design but compliments the figure with some nice engraved, clockwork detailing on the upper surface.

The casting is first class and will require minimal preparation, there are no defects such as air bubble holes or slippages. As always wash the parts to remove grease or any casting residues and you are good to go! 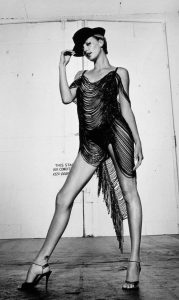 the source of inspiration

I spoke with Christos about his ideas for the sculpt and here is what he had to say:

“After more than 20 years in military miniature modelling I had the desire to try to create something different than my usual soldiers. At that time I had discovered the Steampunk world and all these amazing costumes and mostly female characters. So I decided to sculpt a female steampunk.

I collected a lot of images for reference and I only needed to find the correct pose. Accidentally I fell upon a photograph of the famous actress Charlize Theron and that was the inspiration I was looking for. The rest is a lot of creative hours in my work bench and a lot of Magic Sculp, meaning pure happiness”.

As you can see the inspiration for this piece was perfect, the pose is static yet also dynamic and the composition is well balanced and clearly fitted what Christos had in mind. The steampunk genre has become quite popular over the years and is now making quite a statement within our hobby too, yet this piece still stands out as being rather original and I like it a lot!

Michael Kontraros always seems to create a piece that is highly desirable, many of his releases inspire great projects from figure painters around the world. This piece although sculpted by Christos stands proud with his other releases and I believe will be a great success. There are so many options to create unique and interesting projects with this figure, I expect to see quite a few popping up on social media and making appearances at future figure shows. 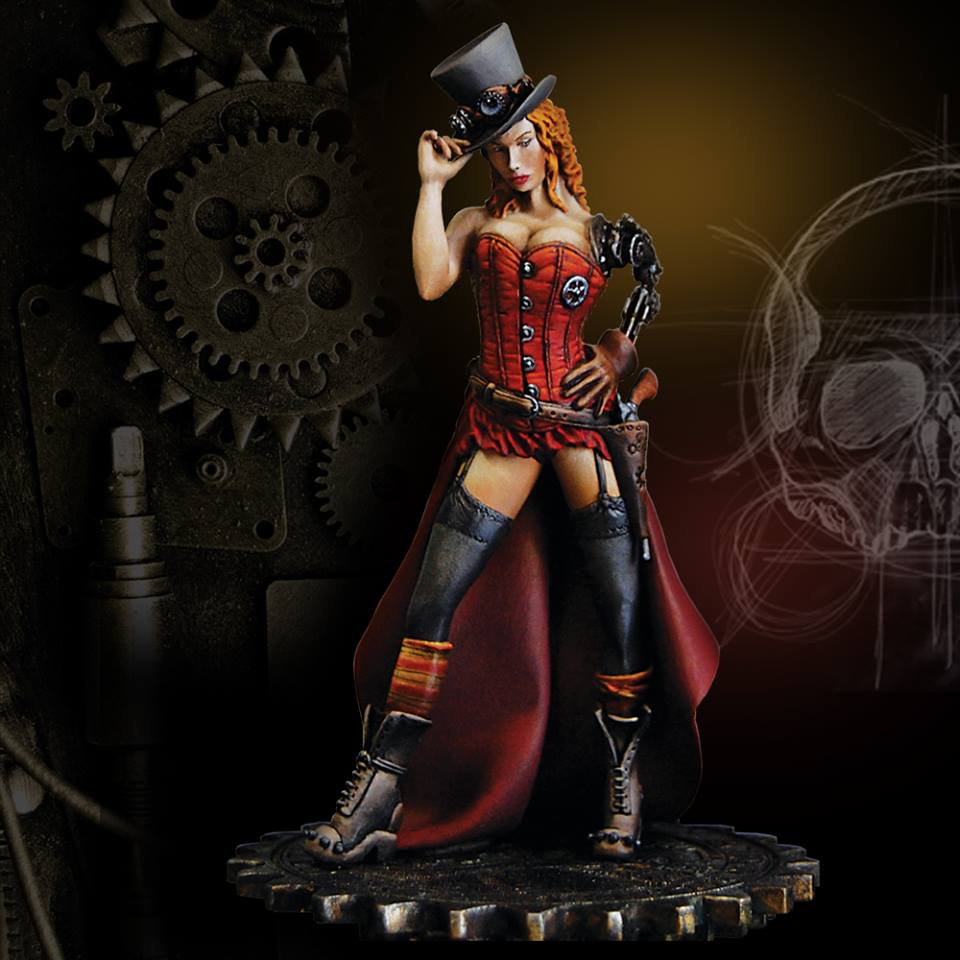 The quality of the sculpt, cast and packaging makes this in my opinion a high end product, yet even with the decline of the British Sterling, €53 (including worldwide shipping) is not a high end price point. In addition, those who back the campaign will also receive an EXCLUSIVE set of metal, steampunk coins as a gift!