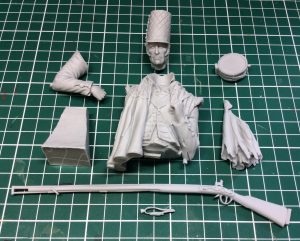 The kit arrived in a rather large attractive box, the lid adorned with the box art by Man Jin Kim. This is a 1/10 scale, polyurethane resin kit, comprising seven parts (including a pedestal) in ziplock bags nestled between bubble wrap and and some paper shavings.

The subject depicted is one of the heroes of the battle of Chillianwallah, Private Richard Perry, who rescued the regiments colours when Ensign Collis was felled. It is traditionally sculpted by the uber talented Carl Reid.

The regiment was initially raised in 1689, following succession of King James II, by William of Orange in defence of the English kingdom. This came about when King James openly Catholic, had a son, meaning the next heir to the throne would have been of Catholic persuasion. The “Glorious Revolution” led by William of Orange, trusted the regiment, commanded by General Lord Schomberg into three years of campaigns until finally defeating the Jacobite incursions.

The regiment later saw action during War of the Spanish Succession (1702-1715), The American War of Independence, The Revolutionary and Napoleonic Wars and in 1848, the regiment found itself at the Second Sikh War, at Chillianwallah, 13th January 1849. 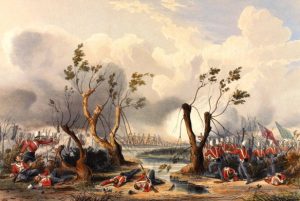 The Army of General Gough marched twenty five miles through thick jungle from Dingee to within a mile or so of where they believed the Sikh Army were encamped. They pitched up at Chillianwallah, “arms were piled, artillery parked, horses off-saddled” the last thing they expected was a battle. Without any warning they came under Sikh artillery fire, forcing them to rapidly draw up battle lines.

That evening they lost 255 fighting men. The 24th commanded by Robert Brookes were joined by the 25th and 45th Native Infantry and placed in the middle of the Line. Where other regiments were permitted to fire at the enemy, the 24th were given the order to use their bayonets, widely regarded as the reason to the tragedy that unfolded that night.

Major Gough, was widely regarded to blame as he would stress over and over again that Infantry “should advance using only the cold steel”.

The Second Division under the command of Colin Campbell, positioned to the left, the First Division to the right, Campbell decided to flank, telling the young Pennycuik (Commander of the 24th) there was to be no firing, just use of bayonets.

Their advance, within 200 yards took them into jungle where maintaining the line was particularly difficult. When they came within range, the rate of fire was such that the pace quickened into a full charge. There was no suggestion that Pennycuik called the charge, it is recorded that the danger, noise and excitement of the closeness of the enemy resulted in the urge to rush forward and as such the Colonel joined his men, charging to lead from the front. The distance was too great to charge successfully and without the right support, it would prove to be a futile manoeuvre.

One survivor wrote “the regiment never wavered for an instant but pressed on without firing a shot. My company was at the centre where the colours were almost a target to aim at”.

Further accounts include “on, on we go…. The goal almost won, ground becomes clearer, bayonets come down to the charge and with wild, choking hurrahs, scarcely a shot having been fired, the battery is won”.

Campbell stated “it is impossible for any troops to have surpassed the gallantry displayed in this attack”.

The Sikhs rallied however, the 24th without support could not hold their ground and the whole colour party were killed yards from the guns. Lieutenant Phillips and Ensign Collis lost their lives as did Colonel Pennycuik and his son (just 17 years of age) who tried protecting his fathers body.

The regimental colour was rescued by Private Perry when Collis fell and now hangs in the Regimental Chapel in Brecon Cathedral, Perry was awarded the Meritorious Service Medal. There is erected at the Royal Hospital Chelsea a memorial for those who fell including 13 officers and 225 men. In addition 9 officers and 278 fighting men were injured. 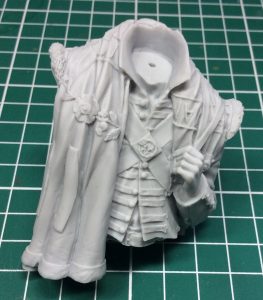 Crisp detailing to the jacket and the Colours

This is a 1/10 resin bust sculpted by Carl Reid. The eight parts are torso with the colours, head adorned with quilted Shako, right and left arm, musket, water bottle, a end section of the colours, a length of strap and the pedestal.

First impressions are extremely good. Not only is there a wealth of historically accurate detail present throughout Carls’ work is an understanding of the human psyche/character during distressing circumstances, such as battle.

Starting with the torso, you notice straight away the somewhat dishevelled uniform with its creases and tears to the seams along the fore arm and below the shoulder. The jacket is partially opened at the neck, collar spread wide and is also open at the bottom too.

The open area at the bottom exposes what looks like to me to be his belly but on the box art it is painted as an undershirt, this seems incorrect to me as there is no evidence of a shirt around his open collar. Below this is the leather belt. The buttons to the jacket are nicely done and those unbuttoned show holes with nice detailing to the stitching. 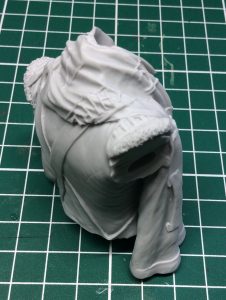 The “furred wings” and lettering of the Warwickshire title

The cross belts have nice undercuts and the plate decoration where they cross is finely detailed depicting the regimental numerals with a crown above.There are nice folds to the sleeves and the detailing to the shoulders is nice nicely done and textured (i’m not sure of the correct term for the “furry wings”, if anyone knows then please let me know Ed).

His left arm is holding the straps to the water bottle which attaches via a peg joining the straps snugly, no need for gap filling. The Colours are draped over his shoulders and show as far as i can tell, all the correct details.

Detailing includes rose wreath, regimental number, some of the letters for the Warwickshire title and battle honour scrolls are present and left blank for your freehands. The folds and creases all look natural and have nice depth and lay to them. There is an extra piece of the Colours that attaches simply below the left arm, showing nice tattered edging, again no gap filling needed.

The right arm supporting the musket has a really natural feel to the pose with nice wrinkling to the fabric at the inside of the elbow where the arm is bent. Both hands are delicately rendered, nice knuckles and finger nail details too. There is a split seam at the elbow and the seam continues the length of the arm and joins the seam at the back of the jacket.

The musket, Brown Bess, has nice detailing to the cocking mechanism, trigger and guard and ramrod, although there is no sling. It sits naturally into the folds of the Colours over the shoulder, with the right hand resting just over half way down its length. It might have been an idea for the sculptor to have created a nook in the musket so you knew exactly where to place it, but this should not really be an issue.

Finally let us take a look at the head. The facial features have that distinctive “Reid” feeling, sharp, detailed, wearisome but stoic expression, with nice detailing to the hair and side burns.

Attention also being paid to the anatomy and the natural sag of the skin around the eyes and jowls, Carls’ work is very human, if you understand what I mean?

The Albert Shako is nicely done too, with a quilted cover secured by buttons at the side. A lot of the reference pictures I saw however, had the front peak without cover and indeed with a smaller rear peak too. 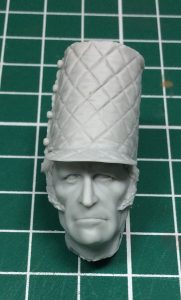 Those with an historical background may feel the necessity to correct this and adding a small rear peak should not be too much of a problem. The detailing and textures to all the materials across the sculpt are very nice!

The cast is excellent, pretty much the only work needed is to remove the small excess pieces of resin and/or small casting plugs and filing smooth the lower edges of the pedestal. Dry fitting shows a very tight fit across all the parts and negates any need for gap filling.

The more I do these reviews and research the topic the more I realise how original so many of these releases are. Not in the sense that it depicts an historical figure of military background, but the actual story behind the sculpt. The narrative of the character. It is the stories of bravery and heroism, those often unheard of within the greater modelling community that resonate within me and revealing their exploits is a great celebration of these soldiers and their sacrifices.The determined look on Private Perrys’ face after rescuing the Colours tells us everything about what it meant preventing the Sikhs taking their trophy.

Carl Reid has a particularly unique style and one that is instantly recognisable.

The design of the piece is exceptional too. The anatomy, the scale, the detailing, historical accuracy, composition et al makes this a believable and well balanced bust.

I believe this to be a great addition to anyone’s collection or indeed cabinet of finished projects. The historical painters will surely love this and rather pleasingly, I am seeing more and more traditionally painters of Fantasy, take up the challenge of historical subjects.

At 65$ I think this is particularly reasonable and affordable although it inevitably comes down to personal circumstances. Indeed for us Brits at the moment, the drop of the Pound Sterling means how hobby has got a little more expensive than before.