Black Sun Miniatures have been making a fair bit of noise since bursting on to the hobby scene, with a wealth of stunning figures and busts. They have gone for the jugular with collaborations with artists such as Palacios, Bogaert, Rubio. Cirillo and others. 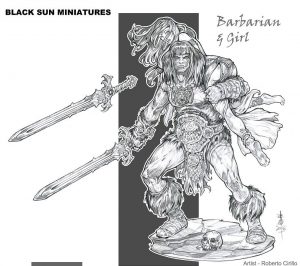 I am happy to announce they have partnered with figurementors and so today I am able to review the “Barbarian and the Lost Princess”. Traditionally sculpted by the incredible Joaquin Palacios aka Freeman, based on the concept art by Roberto Cirillo.

I have been in near constant contact with Carlos at Black Sun and he told me of his decision to offer almost a “no frills” approach to packaging and as such the kit arrived in a sturdy, unadorned, brown box, with a printed label.

The kit is 75mm scale, standing approximately 98mm to the top of the princesses head, comprising of eight polyurethane resin parts and a small scenic base, cast by GRX Creations and costing £45.

Let us take a closer look. 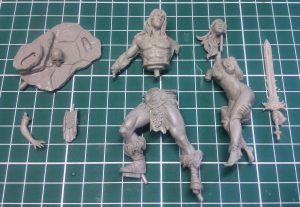 The sculpt is sensational, we would not expect anything less of Joaquin. First glance, reveals to us a definite likeness to Conan, Robert E. Howards iconic Cimmerian King. The anatomy, design and composition are so very well considered and it is a particularly balanced piece.

The torso and head of our hero are nicely sculpted, the head is posed in such a way to produce a very determined and steadfast stance, almost as if in the process of rescuing the princess, he has turned back to face his pursuers.

His facial features are strong and broad, his eyes slightly hooded and his square cut hair frames his face nicely, useful for drawing the eye to the focal point when painting. The muscle groups to the arms, chest and abdomen look accurately presented but the muscles to the small of the back look a little less defined and not so smoothly sculpted. 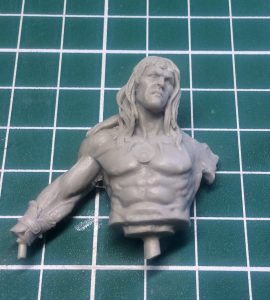 The medallion and tooth fetish necklace has great details and sharp undercuts. The princesses left arm is sculpted to his right shoulder and his left arm likewise to her, holding her aloft, when put together the fit is perfect. Some time and consideration must have gone into the cutting of the sculpt ready for casting.

The princess has a tall and slender form, her hair hangs down over her exposed breasts, sparing those who don’t always approve of how nudity is presented within our hobby. 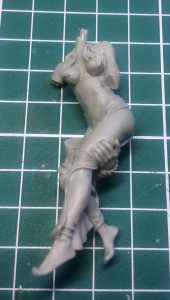 The Lost Princess (with that dodgy moldline)

She is wearing sheer lower garment, such as pantaloons or a sarong maybe, that have really nice flows and folds. A nice touch here is the impression of the barbarian’s hand slightly settling into the soft flesh of her thigh.

The various torques around her ankles and arms, along with her immaculate hair, and
well groomed appearance suggest she is from a wealthy and privileged background. Her right arm attaches via a pin and socket assembly and her fingers are delicately crafted.

Her head shows fine features, with mouth open showing her tiny teeth. There is an expression of anxiety but not necessarily one of fear, she doesn’t seem overly bothered about being abducted, if indeed she is!!?

The lower half of the barbarian continues the attention to anatomy with accurately rendered muscle groups, the raised leg and firmly planted feet give the impression of grounded strength and power. 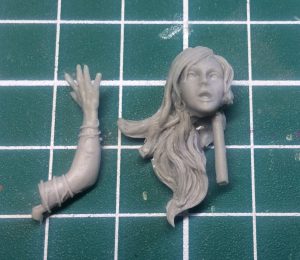 A little clean up is needed around the hair

The large ornate belt is exquisitely detailed with a scaled loincloth finish. The strapping around his footwear is accurately and carefully sculpted with sharp undercuts and definition between the straps. Many times in the past I find strapping is poorly rendered and a paint to paint well, not this time though!

The fur topping to his boots matches that protruding from beneath the belt and arm vambraces, tying the various elements nicely together. There is a small section of loin cloth to be attached to the rear, a tight fit, no need for any gap filling at all. 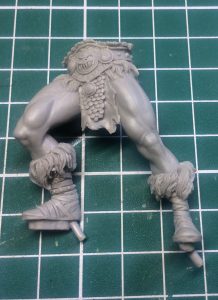 Stunning details to the straps, fur and ornate belt

The base is simple but compliments the figure well. In our warrior’s right hand we have his ornate broadsword, nothing over the top and in fitting with the character as a whole.

The cast by GRX Creations is very good, capturing all those crisp details and successfully overcomes the challenge that comes wit
h sheer clothing. There is one relatively bad moldline that runs from her right nipple, down across the breast and continues down her stomach, this will be visible and so will need cleaning and filing smoothing.

I initially thought her thighs were quite rough too but realised these would be hidden and was probably a result of the cutting down process. There are several plugs that need removing from various parts, the sword will need straightening but other than that, there are no other defects to the cast.

It is clear to see the inspiration behind this piece and as a massive Conan fan I shall not be complaining. The sullen and smoldering gaze of our barbarian, minimalist clothing, the giant stature of his muscles, the broadsword are all throwbacks to our King of Cimmeria. I definitely want to paint this in a “Frazetta” style as Frank frequently produced cover art for magazines and comics depicting the mighty barbarian Conan! 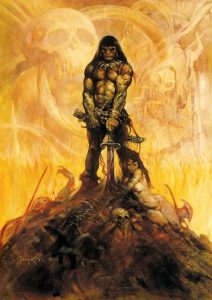 The posture, whilst static also remains dynamic, as it represents a frozen moment in time, a pause to the killing perhaps or maybe he is catching his breath, following a pursuit. The figure can be interpreted in many ways, has he rescued the princess for instance? This storytelling also gives the piece the dyna
mism needed to bring it to life.

Let’s face it, a bare, muscular barbarian with broadsword is hardly at the top end of originality, but I don’t care!

Black Sun Miniatures are creating quite a stir already and the sculpts by artists such as Palacios are always desirable. The storytelling, quality of sculpt and sheer breadth of paintability makes this a very nice project.

I think if the barbarian was by himself, we would be looking at a kit £10 cheaper, I believe the “no frills” packaging has helped to keep costs down and this is reflected in their competitive price for this figure. 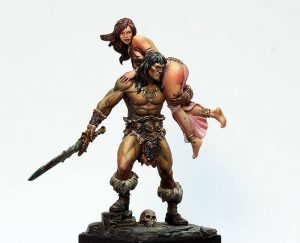 Affordability always comes down to an individuals disposable income but in my opinion I think this kit is affordable and worth the money. I mean come on, a Conan inspired barbarian, sculpted by Joaquin Palacios? What’s there to think about?