I was so excited when Pedro Fernandez agreed to collaborate with figurementors, his works are incredibly provocative with stunning detailing, crisp casting and an originality to the subject matter that we rarely see elsewhere within our hobbying world. The latest kit, offered as pre-release at this years Euromilitaire show, has raised  a fair few eyebrows as it depicts the Nazi Amon Leopold Goeth as portrayed by Ralph Fiennes in the incredibly moving, 1993 movie Schindlers List. 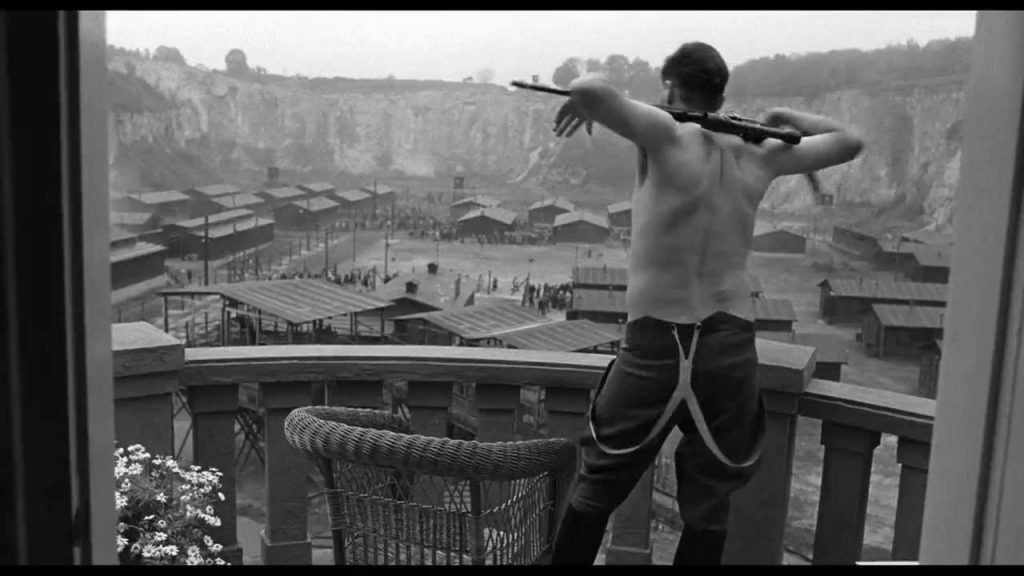 Amon is the fifth release from Pedro Fernando Works, it is a 75mm scale (although it is approx 90mm in height), multi part, polyurethane resin kit cast by SAGO. It arrived in a compact, sturdy black box with a red lid adorned with a black and white graphic of the subject matter. The kit consists of six parts including a small floor section to mount the figure upon. The smaller pieces are contained within a ziplock bag and everything is nestled in thick, shredded red tissue paper. The presentation is superb and first impressions of the figure itself are very good.

Each release comes with a short narrative about the character written by Pepe Gallego on a glossy A5 sheet of paper. This piece of creative writing really helps to paint a clear picture of the concept and design behind the character. Here I have chosen some words that really struck a cord with me and to which I will be using as inspiration for my project.

“To see him appeared from the field visits caused anguish, unease, fear. An indescribable terror captured us when the coldness of his eyes reached us, the mute intentions hidden behind his cynical smile……..

Every morning, terrified, we looked out of the corner of our eyes the instant he appeared on that flat roof, thinking about who would be the next in receiving a shot to the head coming from his rifle. When he lent out only half-dressed, his favourite activity was improving his aim, shooting at us……Terror made the Plaszow prisoner’s nape hair stand on end just seeing him appear”.

The full text is also published on the website. 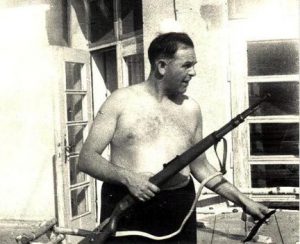 Plaszow is a southern suburb of Podgorze district (formerly Krakow) in Poland and was the site where the SS built a Nazi German labour and concentration camp soon after the construction of the semi-colonial district of General Government across occupied Poland.

The camp was infamous for the brutal and sadistic treatment of the prisoners under the command of the SS Commandant Amon Goeth. The narrative above is backed up with witness accounts stating “he would never start his breakfast without shooting at least one person”.

One of his personal maids, Helen Jonas-Rosenzweig also recounts her terror; “As a survivor I can tell you that we are all traumatised people. Never would I, never, believe that any human being would be capable of such horror, of such atrocities. When we saw him from a distance, everybody was hiding, in latrines, wherever they could hide. I can’t tell you how people feared him”.

Goeth was personally responsible for many deaths and oversaw the liquidation of the ghetto at Tarnow, at the outset of WWII 25,000 Jews occupied this area and at the end of his “operation” just 8,000 remained. These were immediately sent via train to Auschwitz, where less than half survived the gruelling journey, the vast majority of those that had survived were deemed unfit for labour and were so instantly executed. 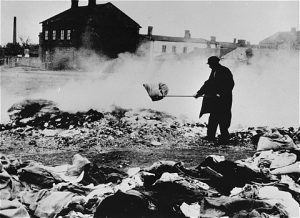 Liquidation of Tarnow and the confiscation of Jewish belongings

During his indictment for war crimes, it was claimed during this “operation” that he was personally responsible for the deaths upwards of 90 women and children. The camp prisoners lived in perpetual fear, Amon had two dogs, Rolf and Ralf, who were trained to tear prisoners limb from limb on command. In addition to those prisoners that died of starvation, health problems and the such it was believed that between 9 and 12 000 were actually murdered, one site in particular, Hujowa Gorka (Prick Hill) was used for mass killings.

In September 1944, he was arrested and charged by the SS for  theft of Jewish property, violations regarding the health and welfare of prisoners and failure to provide suitable food for the prisoners. He was relieved of his duties but the charges were subsequently dropped with Germany about to lose the War and he was diagnosed with mental health issues and committed to a Mental Institute in Bad Tolz.

He was tried once more in September 1946 following extradition to Poland when the War ended. The Supreme National Tribunal of Poland found him guilty of membership to the Nazi Party (a criminal organisation), of homicide and the personal ordering of capture, torture and extermination of thousands of Jews. He was sentenced to death by hanging in September 1946 in Krakow, where his final defiant words were “Heil Hitler”. 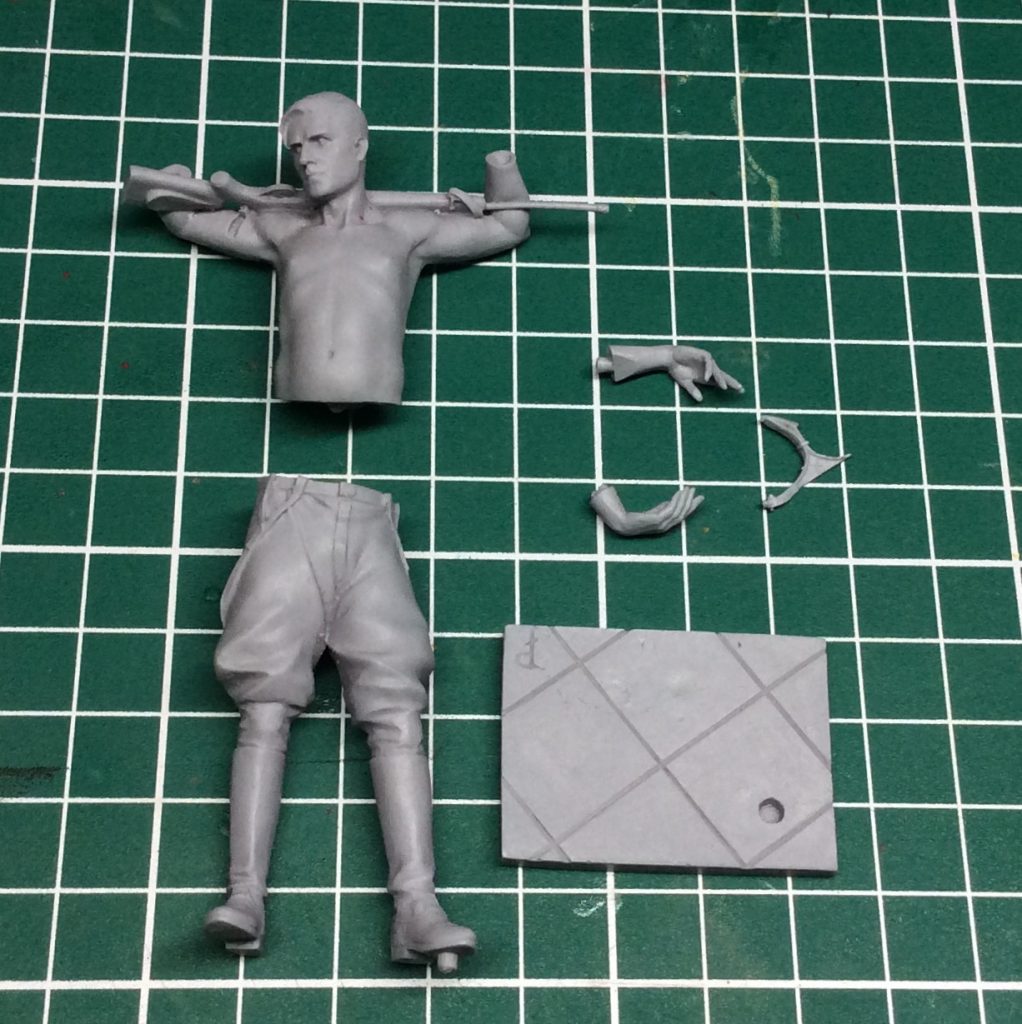 The sculpt is incredible, it is subtle, smooth, detailed and the subject matter itself is provocative and thought provoking. Although the kit consists of six pieces, the majority of the figure is represented in two large parts, torso and the legs. The other parts include the section of flooring, a small loop of rifle strap and the two hands. 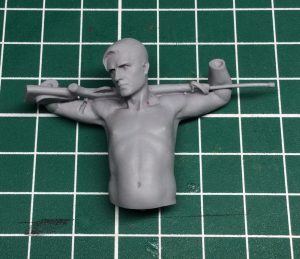 Beginning with the torso, the anatomy is accurate and well defined. The musculature is smooth, not exaggerated or fantastical. The figure clearly depicts Amon as portrayed by Ralph Fiennes, the pose clearly that of the image in the prelude above. The stomach has a paunch, although the physique of the character in the film is definitely in better condition than that of the real Amon.

The arms raised, rifle slung across the shoulders, hands hanging limp from the wrist, relaxed despite the horror of the actions he may have committed or indeed those he may be considering.

The detailing to the rifle is crisp, showing cocking mechanism, sights and attachment points for the sling. A close inspection actually shows that the muzzle of the barrel has a drilled opening too. Take care with his section as it is particularly delicate and mine was slightly warped which will need heat correcting.

The head is turned slightly to his right and declined a little as he looks down into the camps’ yard. The texturing to his hair is perfect and facial features are delicately done. The bottom of the torso is cut in such a way that the small of his back is almost used as a locator pin to correctly attach to the waist, the dry fit of these two parts shows there will be no need for gap filling. 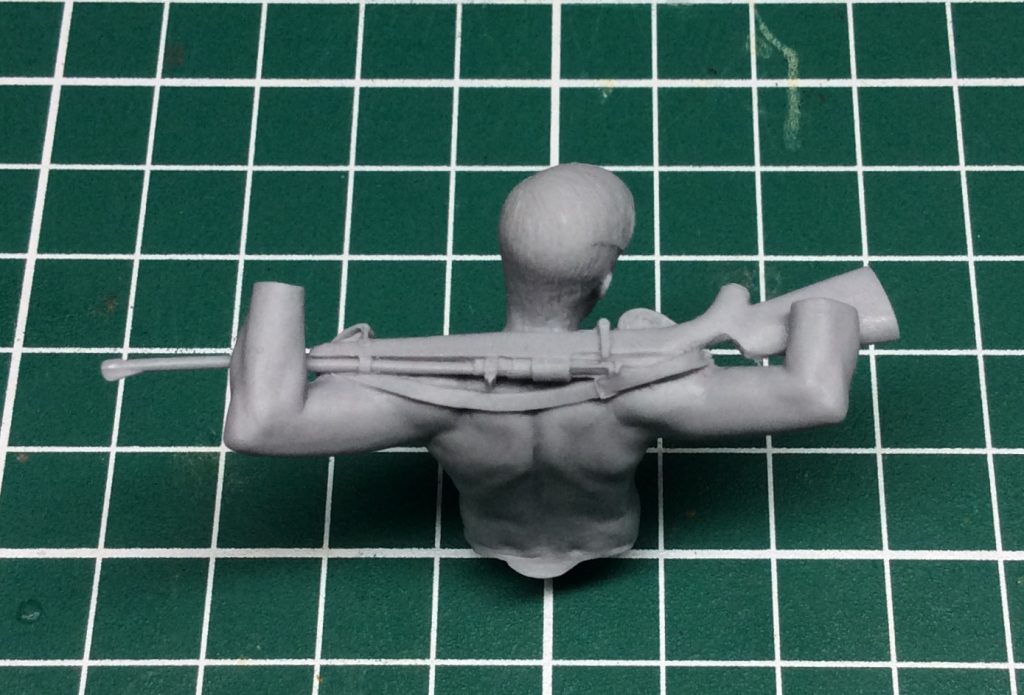 detailing of the rifle

The legs are next and the quality of the sculpt continues throughout all elements, the trouser are tucked into his knee high dress boots and the creases and folds to the fabric where the trousers gather is rendered realistically. The braces are off the shoulders and hang loosely from the waist, the sag of the loops down either side of his legs is another nice touch and shows attention to detail. 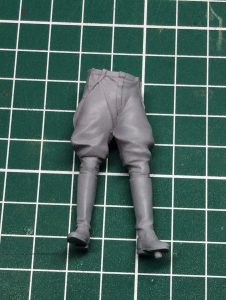 Buttons and hoops are present and crisply detailed and the braces themselves show sharp undercuts. The leather boots are detailed and presented in a realistic manner once again, the seam between boot and the sole is clearly visible and the wrinkling around the ankle area is nicely done too. There is a locator pin to the left foot to attach via a hole in the floor section.

Then we have the two hands, his left is a really good fit although you may still want to use a putty wash to fill any visible gap between hand and arm. The right hand, just like the left is attached via a peg and hole assembly, yet the pin on this side is too large and the hand doesn’t fit at first attempt. I believe it will be necessary to trim the peg and once more use a putty wash to hide the join.

We are regularly told that the face and hands are the two most important elements of any sculpt and these don’t disappoint. They are finely sculpted with detailing to the fingernails and knuckles, the fingers hang naturally mirroring the rest of the hand and the stance. 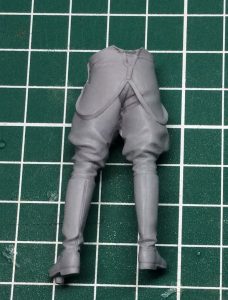 reverse of the legs, showing details to the boot and braces

The last piece to look at is the loop of rifle sling and I have to be honest I still haven’t determined how this piece attaches. There is a recess in Amon’s bicep to receive the loop but beyond this I can’t see how it connects to the rifle or which way around.

The photographs currently available on the website and the internet in general are few and far between, with it being a relatively new release I haven’t seen images on fellow painter’s pages either. I will make contact with Pedro and see if he can shed some additional light on the  issue.

The cast by SAGO is very good there are no major defects such as air bubble holes or casting slippages, there are one or two superficial mold lines and cleanup of the parts should be minimal. The cast also picks out all the delicate details we have discussed regarding the sculpt, in sharp clarity.

One of the key elements to the works of Pedro is their unique subject matter and this one is no exception, on it’s release I saw some comments that said despite the quality of the sculpting they felt the subject was in poor taste. I disagree, I am aware of the dreadful acts carried out by members of the SS in particular and I can’t put into words the hurt and fear they caused in their victims and their family members. However, I think of this miniature in the same way I do other military figures, that depict soldiers and characters reviled in history. I believe that these sort of miniatures ensure that the terrible events of WWII are never forgotten, that the people who lost their lives are never forgotten. It acts as a reminder to all of us!

The design is balanced and the detailing and sculpt is wonderful. It perfectly captures that rather iconic still of the movie Schindlers List and as I have already said the pose along with the historical facts make this piece incredibly provocative. I know for me, that when I paint this it will be an emotive experience.

The works of Pedro Fernandez are popular and sought after and I think this piece will be just as much also. Yes the subject matter is controversial but actually this could easily be painted in a manner unrelated to the travesty that occurred at Plaszow. Indeed the controversial nature of the kit may appeal to collectors of that particular era. Whichever way you view this figure there is no denying it’s beauty and I believe it could make for an interesting project.

The figure comes in at €45 plus shipping which I think you will find is a fair price point. Nowadays it seems you can not expect anything to cost less than €35-40, it is just the way the market is at the moment, although us Brits feel it a little harder now since Brexit. I think for the quality of the sculpt and cast along with the presentation, Amon offers good value for money.