Aly the last survivor is the debut release from Black Veil Models, it is a 75mm kit, digitally sculpted by Juan M. Puerta, a Spanish Character Artist at Goodgame Studio. I have been friends with Armando Martijn for maybe five years now on Facebook, he has followed my development as a figure painter and I his, so obviously I was thrilled when last year he told me of his plans for a miniature company producing limited edition, high quality figures. It goes without saying that I will help in any way I can. 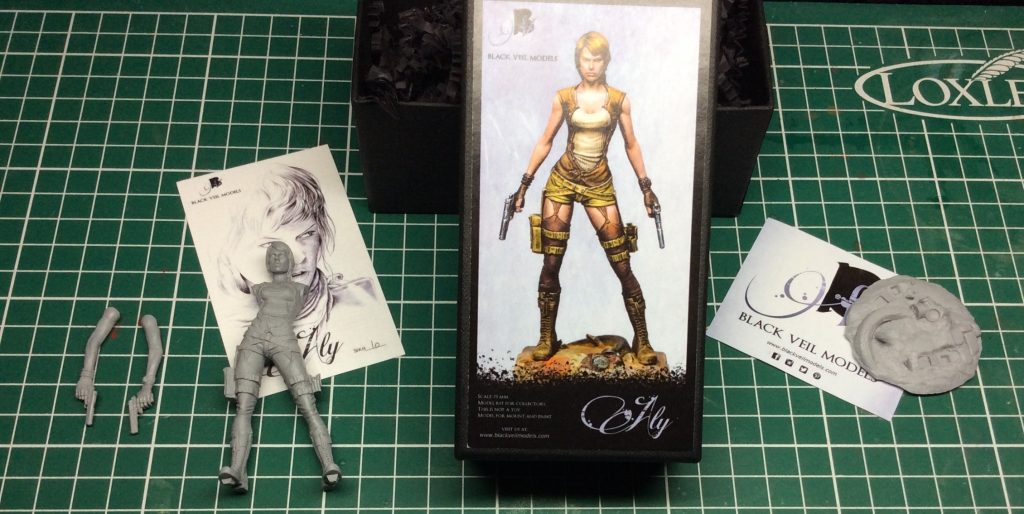 The kit arrived in a slender, attractive black box with lift off lid adorned with the boxart by Marc Masclans. The kit consists of four parts, nestled within black paper shavings along with a sticker (we all love stickers) and a pencil sketch of the concept art. Everything about the release is of the highest quality and first impressions are very good, let’s see if it stands up to some closer scrutiny. 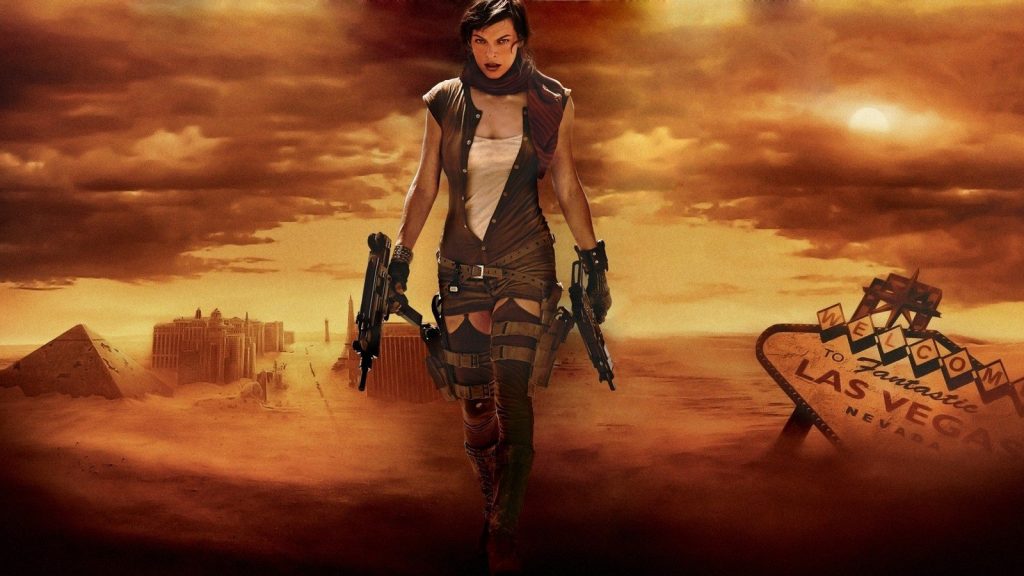 As we all know, this figure is heavily inspired by the character Alice from a particular film and game franchise, in particular around the year 2007, a character played by Milla Jovovich. As such the setting for this figure can so easily be that of an apocalyptic near future, zombie outbreak or similar scenario. That doesn’t mean that we just copy what has gone before when it comes to painting this piece. It could easily be interpreted as historical/civilian or a more elaborate sci fi project. Marc was heavily influenced by the franchise character in his boxart, keeping to a minimalist palette in keeping with her dark and gritty personality. 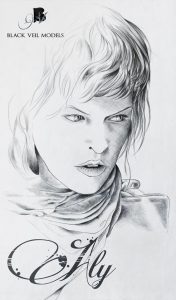 The kit is particularly basic to assemble, that does not however, mean that the kit is mediocre or characterless. The nature of the pose means that cutting it for cast merely meant removing the arms at the shoulder. Both arms attach via a square peg and hole assembly and then is merely a case of attaching to the base, where we find footprints along with a square hole to accept the feet. The sculpt is based on a series of visual clues, conversations between sculptor and Black Veil and Armando’s own sketch.

The facial features are delicately sculpted yet despite this captures the dangerous and determined personality of our character. The exposed parts of flesh would initially hint at an over “sexualised” figure yet once again this is another example of the paradox of this sculpt as she doe not appear to be crass or the typical “babe with boobs and guns”. The hair is expertly rendered and attention has been paid to the human anatomy throughout.

The ribbed vest is wonderful showing naturally occurring creases and folds and the leather waistcoat over the top once again shows an incredible eye for attention to detail, with seams, trim, and studs. The pose is a little static yet at the same time is one which exudes confidence, power and a barely contained sense of danger.  Next we have the mini skirt with crossed belts, details are everywhere and so delicately and finely rendered. There is an accuracy to this detailing that I have only seen matched on the Trigger series of figures from NutsPlanet. 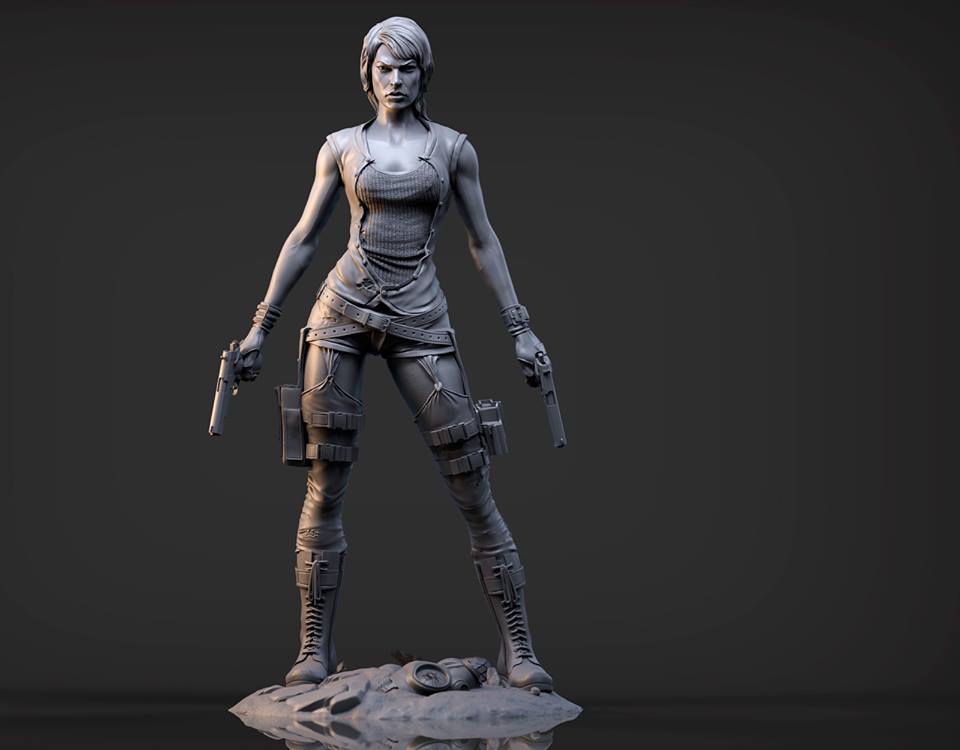 The rest of her costume consists of the heavy duty, knee length boots, thigh length stockings and suspenders. Again, it toys with portraying the character as a sex object yet does enough with everything else to ensure this piece is not treated as such. The fine detailing to the boots alone is a work of Art, Juan is clearly a digital sculptor at the peak of his creative powers. 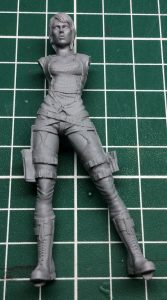 Both arms display smooth musculature and accurate placement and proportion, I am always told that the face and hands are integral to a good sculpt and once more, the rendering of the details to the hands and fingers is top quality. The arms are held down by her side, relaxed but poised to explode into action, holding her pistols. The fingerless gloves, wrist band and other accoutrements are another throwback to the Jovovich portrayal of “Alice”.

Finally the base is small, compact but nicely detailed with a mix of gravel and cobbled floor littered with gas mask and motor cycle tyre. The casting by SAGO is flawless, I have yet to see a cast from them that is not 100% perfect, Armando has gone all out to create a wonderful product from sculpt, boxart, cast and presentation.

This is a high end product that is for sure.

This is actually tricky to gauge, on one hand we have a lot of post apocalyptic figures and it is heavily inspired by images and artwork from the franchise we won’t name. Then we have the pose and again is quite static and not a lot at first glance, is going on. 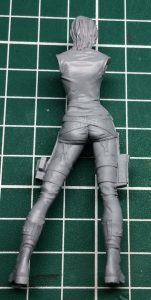 rear view – lots of textures and details throughout

If we look beyond this though, what we find is a well considered, balanced composition and a design that is complimented by beautiful details and a variety of textures; all of a sudden we see this for what it truly is, a beautiful figure, that comprises clean surfaces, a non busy design, that should be a lot of fun to paint.

The pose is balanced, the guns held in her hands down by her sides and her head, act to triangulate the figure. The various straps, belts and buckles all display sharp undercuts and the casting by SAGO captures all of the subtleties and clever touches that Puerta has incorporated into the sculpt.

I had spoken with Armando prior to the release and their plan is to release original sculpts based on new concepts however, as a fan of the actress and the franchise, Armando could not resist the temptation to bring her to life in miniature form. I for one am glad he did!

The subject, sculpt, cast and presentation are all very good and I can see this appealing to a large number of our figure painting community. When you consider that this is a debut release, then the guys at BV have done an outstanding job bringing this to the market place. This will be particularly desirable to any one with an interest in post apoc, alternative history, zombie plague scenarios and obviously fans of the franchise (or actress).

I think €45 is a very competitive price point for a figure of this scale and quality, when we take into consideration all of the elements I have discussed above, I believe it offers good value for money. This kit comes highly recommended!