I have been following Kris over at BrokenToad for some years now, it helps that he’s a good friend, and I am part of his trusted circle of peers who get to see things before they are officially released and I have been sat on this little beauty for quite some time (just wait until you see a particular release coming soon). Alas is a 1/10 scale polyurethane resin bust cast in four parts with an additional clear skull. It stands approximately 75mm in height and was sculpted by Ali Jalali an incredibly talented 3D artist, casting as always is done in-house. The smaller parts come in ziplock bags and the whole kit is nestled between two layers of foam.

In my opinion the bust depicts a high society lady of the 18th century with the hairstyle and quite possibly the makeup so inspired by Lady Antionette. The bust could easily be painted in a manner of ways to blur the boundaries between historical and fantasy genres. 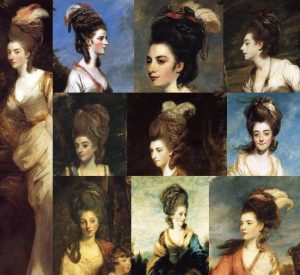 Many examples of the hairstyles can be found in portraiture

When I researched hair of the 18th century I found a lot of portraits of ladies with big hair, similar to that depicted in our bust, I also found out that whilst a lot of these portraits were undertaken in clothing that would not normally be worn in everyday use, the hairstyles of these ladies were worn like this a lot; women painted in exotic clothing would normally still have worn the hairstyles and cosmetics that were la mode.

In France hair styling and the application of cosmetics had a particularly important function. Indeed, for high society and bourgeois classes, the toilette or dressing, was an important daily ceremony often before a select audience, although it was actually Louis XIV that created the spectacle.

During Marie-Antoinette’s reign the ideal woman of the 18th century had hair that was black, brown, or blond and  red hair was unfashionable, frowned upon and often dyed a different colour. Continuing the ideal of the perfect woman she would have some or all of the following attributes, wavy or curly hair, high forehead, plump, rosy cheeks with pale, alabaster skin.

To top off the physical attributes, eye colours that were appreciated included black, chestnut or blue, eyebrows were semicircular and full but not mono-browed, her lips would be “rosebud” i.e. small with a slightly larger lower lip, soft and red. Many portraits depict these very characteristics especially those of  François Boucher. 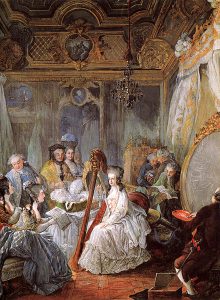 Marie-Antoinette with a select audience as her hair is dressed

During this period, unlike men, women rarely wore whole wigs.  Instead, they increasingly hired coiffures who added false hair and ornaments to their natural hair.  Women were expected to dress their hair and indeed used padding, feathers, false hair and even powders but were expected to also stay natural. The 18th century was well known for men wearing wigs and it was introduced by King Louis XIII of France (1610-43) in the 17th century.

Both men and women powdered their hair or wig throughout the 17th and 18th centuries.  Powdering was introduced when King Henry IV of France (1589-1610) used dark powder on his greying hair. White haired wigs were popular because they were expensive and rare, and so men and women began (in the early 18th century) to use white powder to colour their wigs and hair to emulate their richer peers.

Hair powder was made from a variety of materials and was much kinder on the hair than dyes. The quality ranged dependent on the ingredient used, lowest being corn and wheat flour, the highest quality being finely milled and sieved starch.  It was usually white as this was most sought after but other colours included  brown, grey, orange, pink, red, blue, or violet.

Looking into the hairstyles and fashions of the 18th century, I would place our lady as about 1770’s with her large hair, most women wore their hair anything up to actually one and a half times taller than their actual head. The french women began wearing powder in the hair from as early as the 1750’s whilst the English didn’t follow suit until two decades later. The hair was almost always curled with curling irons to create texture and was held with pins, the height was achieved by layering over the top of pads or cushions called toques made from various materials including wool, wire and hemp to name a few.

Mary Frampton (173-1846) the author of a journal and considered quite the expert in all things Victorian including fashion, art and politics wrote:

“At that time [1780] everybody wore powder and pomatum; a large triangular thing called a cushion, to which the hair was frizzed up with three or four enormous curls on each side; the higher the pyramid of hair, gauze, feathers, and other ornaments was carried the more fashionable it was thought, and such was the labour employed to rear the fabric that night-caps were made in proportion to it and covered over the hair, immensely long black pins, double and single, powder, pomatum and all ready for the next day. I think I remember hearing that twenty-four large pins were by no means an unusual number to go to bed with on your head” (1780).

Such elaborate hairstyles could be worn for days or weeks at a time. 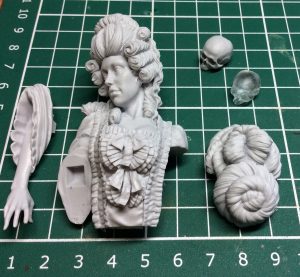 The sculpt perfectly captures the essence of the bourgeoisie (the middle classes and their materialistic values), with the high forehead, cheekbones, rose bud lips etc that we talked about earlier all present along with the large hairstyle that was prevalent during the 1770’s.

The sculpting to the hair (both parts) is exquisite with lots of curls and folds, you can see how pads would have been used to build the height with all of these curls layered over the top.

There are some really nice touches too with sections of hair dangling and curling over the delicate shoulder. Her head is turned slightly to her right and gaze lowered, looking into her outstretched hand which can be assembled with the choice of skulls, adding to her demure and slightly sad look.

Her neck muscle is nicely rendered to reflect this twist and leads down to her ample bosom, contained within her rather flouncy and decorative clothing, I am not overly sure if this is a formal attire or maybe her night time dress for her boudoir. 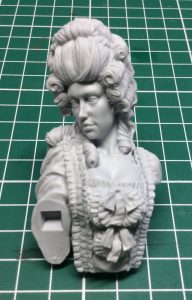 There are nice details with trimming, cuffs, ruffles and bows with nice creases and folds to the sleeves. The back of her hair is attached to the head via a large peg and socket, her large hair is very reminiscent of the time, with curls and folds stacked up high, you can just imagine the pads beneath, with the hair layered and pinned into place.

Her right arm is bent at the elbow, raising her hand to her eye level as she observes the skull. The fabric of the sleeve hangs in folds and the cuff falls back revealing her slender wrist and delicate hand. There are nice details here with the “bulge” of the wrist bone, fingertips and nails and the lines of her open palm. The arm attaches via a peg and socket and once the parts are filed smooth the join is hidden in the folds and there is no need for gap filling.

The clear skull is a nice alternative and it was well planned not to sculpt the skull as part of the hand, thus giving you the option of either skull or none. The resin skull has great detailing and looks anatomically correct with deep eye sockets, well formed nasal cavity and with all the little teeth present in the upper jaw. The lower jaw is missing and from underneath you can see the site of attachment for the spinal column.

I was also looking at the size of the skull and when comparing it to the head of our lady, even taking into consideration the missing lower jaw and the bulk from flesh, tissue and skin, the skull looks a little on the small side. This raises a question, was this done purposefully by the sculptor so that the skull didn’t detract from the lady and look cumbersome in her hand, is it a slight oversight or are we looking at the skull of  a child, juvenile or perhaps even a female love rival. In my opinion the skull is slightly too small to be that of a male adult. This could lead to all sorts of avenues for you to interpret and tell your own story. 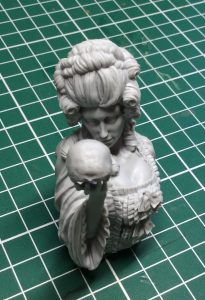 The cast is done by Kris himself and is nigh on flawless, there are no air bubble holes or slippages and the one small mold-line on the arm is fine and easily remedied with a little filing or sanding. Other than filing off some excess resin on some parts, preparation should be minimal and following a wash in some soapy water we should be good to go!

I have to admit to not seeing too many kits of this particular subject matter and the addition of the skull adds a further element of storytelling. The bust is well designed and balanced with attention paid to the anatomy throughout. The textures to the hair are incredible and the details to the bodice are great with sharp undercuts and creases and folds nicely rendered and not overdone. In my opinion this bust is particularly original in a market that gets more and more crowded each month. I have already seen a particularly original WIP of the bust, check out Steves’ work HERE!

This for me is the best release from BrokenToad so far and will be of interest to both collector and figure painter. It offers a wealth of opportunities painting wise especially for those that haven’t painted a female bust before (like myself!). The sculpt is crying out for some treatment from Pepa Saavedra and I am pretty sure we will see some beautiful paint-jobs on the internet in the not too distant future. The bust could easily be interpreted in several ways and blurs the boundary between historical and fantasy genres.

This kit costs £40 and is at the upper level of what I would pay, I say this merely because for a similar price you can purchase a more complex and larger bust from Life Miniatures, whose prices I consider offer exceptional value. That takes nothing away from this kit though. It is exquisitely sculpted and cast and has filled a niche within the hobby. Let us not forget either that this is a one man show and BrokenToad continues to raise their standards with each new release.