Abel is the second release from the Pulvis range of figures from Kimera Models. It follows the initial releases, being one that can be assembled and painted in a multitude of ways. Excluding the demon, scenic base, the kit consists of 23 polyurethane resin parts, digitally sculpted by Hector Moran, based on the concept art of Macs Gallo. My kit arrived in the stunning, black box with the silver grey, embossed logo, although as mine was a pre-release it didn’t arrive with the information leaflet or the box art.

There are two versions of the box art, depicting the two versions of Abel, the Knight of the Light and the Undead, by Kirill Kanaev and Francesco Farabi respectively. The parts are sealed in ziplock bags and nestled between layers of foam. The presentation throughout is very good, first impressions are once more great however, I have noticed that a 2cm length of golden wing has snapped, at the point where it is broken I can see a hollow which may be an air bubble hole. 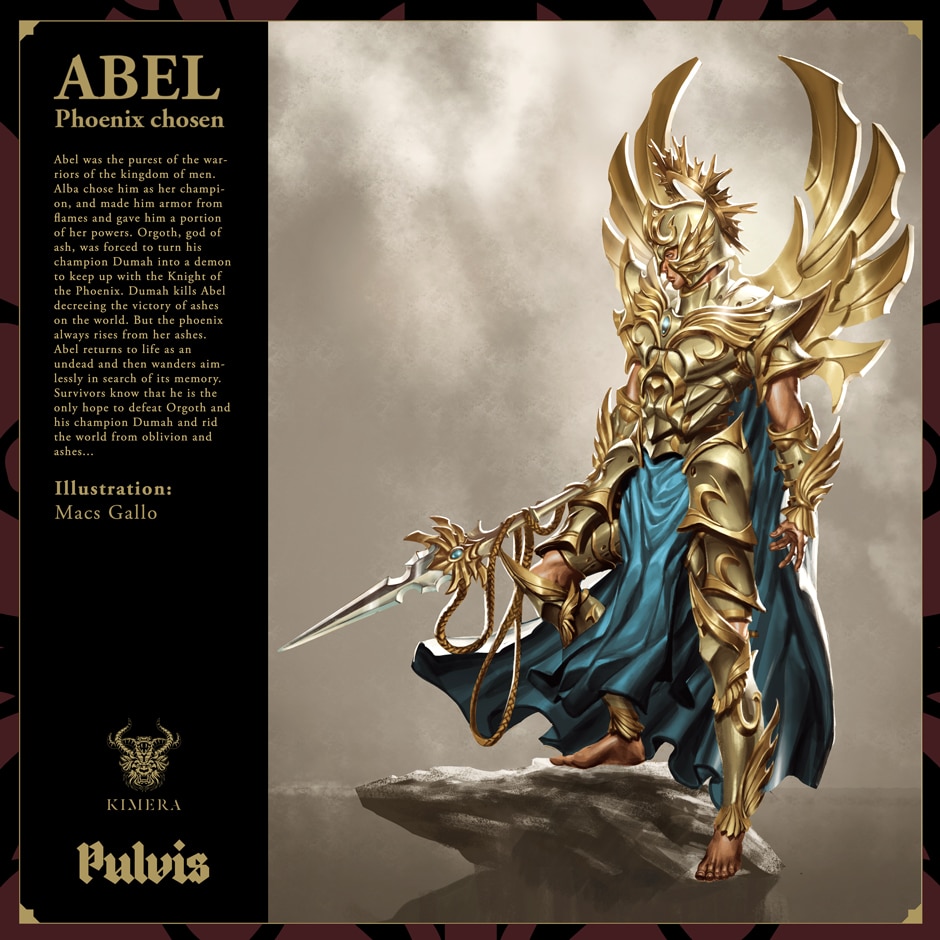 “In the beginning there was Orgoth, God of dust and ashes, who controlled the world. Then from the ashes Alba was born, the Phoenix goddess, who lit the Fire of Life. After her there emerged many other gods and with them were the creatures that were bound to them.

They used the ash and fire to build their kingdoms and their cities and they prospered.

Orgoth became furious and decided to take back the world that had been stolen. He turned to ashes all that he found in his path. Brave gods with their chosen rose up in defence of their kingdoms and fell one by one, becoming part of the dust.

Some of them were confined to oblivion, others became vassals of the Dark god, swelling its ranks.

From the ashes of the last battle of the free world, Alba rose again, the Phoenix goddess, goddess of light and flames, immortal, destined to always be reborn from its ruins; the only one not to be defeated by the god of dust.

Dumah, immortal champion of the god of ashes Orgoth, was a powerful warlord. The dark god bribed him, making him his vassal. Alba, the phoenix goddess, made Abel her chosen one, he was the purest of the warriors of the kingdom of men and she made him armour wrought from flames and gave him a portion of her powers. Dumah was transformed into a demon to to do battle with Abel.

Dumah kills Abel in a legendary duel  that marks the end of the war and the victory of the ashes.

But there is still a hope …the phoenix always rises from the ashes.

Abel returns to life as an undead and wanders aimlessly in search of it’s memory. Survivors know that he is the only hope to defeat Orgoth and his champion Dumah and rid the world from oblivion and ashes”.

First of all this is a crazy amount of parts and makes this kit so versatile however, it can also be quite daunting to see all those parts and decide on how you plan to build yours. I would probably go the way of the Undead version as I still have no idea how to do NMM and the Knight version is a lot of shiny metal! On most of my reviews I will discuss individual details and elements of the kit but I just do not think that is possible with these kits, there are so many parts and details the review would become incredibly long, so I will focus on certain aspects I wish to bring attention to in this figure. 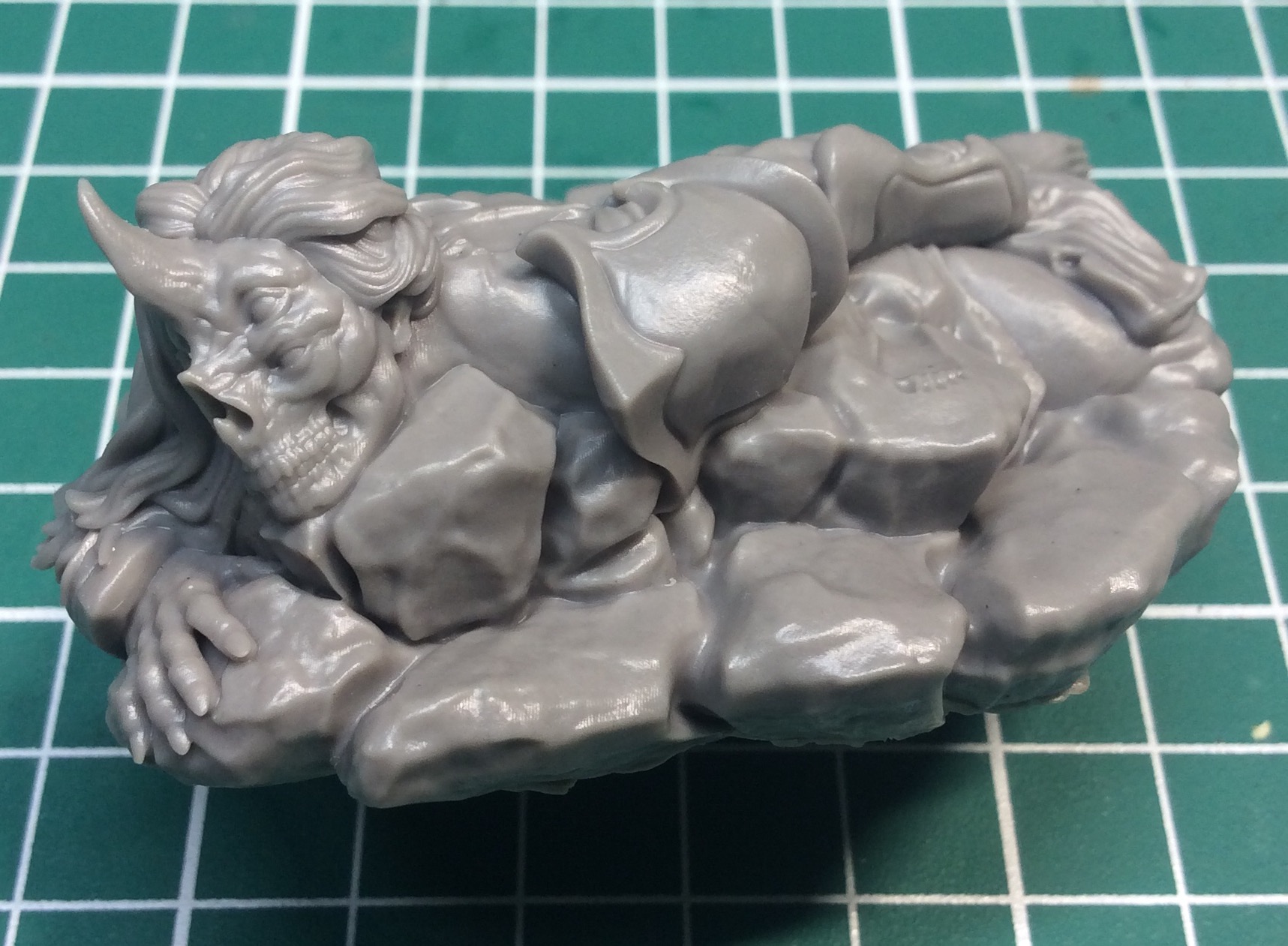 the demon base – itself a nice piece of work

The base itself measures approximately 80mmX50mm and depicts a conquered demon, it is very often that a base is merely an afterthought and usually lacks focus and detail. However, this base looks as if it had been lavished with the same attention to detail and care as the main figure. There are no casting defects present at all.

Abel can be constructed primarily using the torso and two legs, followed by choices with the arms and heads. After this you have choices to make on the amount of armour, tunics, embellishments to create your own semi unique version. The arms are attached via a square peg and hole assembly as is the right leg but for some peculiar reason the left has no pegs or holes and judgement is required to get them to attach in the correct positioning (after publishing, Francesco got in touch to let me know that this was an incorrect cut by the printer, an error and that it had been rectified for all of the commercial kits, seems I have a one off original!). The level of detailing throughout is phenomenal with sweeping curves, geometric shapes and sharp undercuts where needed. The various elements of armour literally just fall into their correct positions and there is no need for any gap filling. I would build this stage by stage paying careful attention to how you want your figure to look, you can easily create something different again from the two versions we have seen so far. 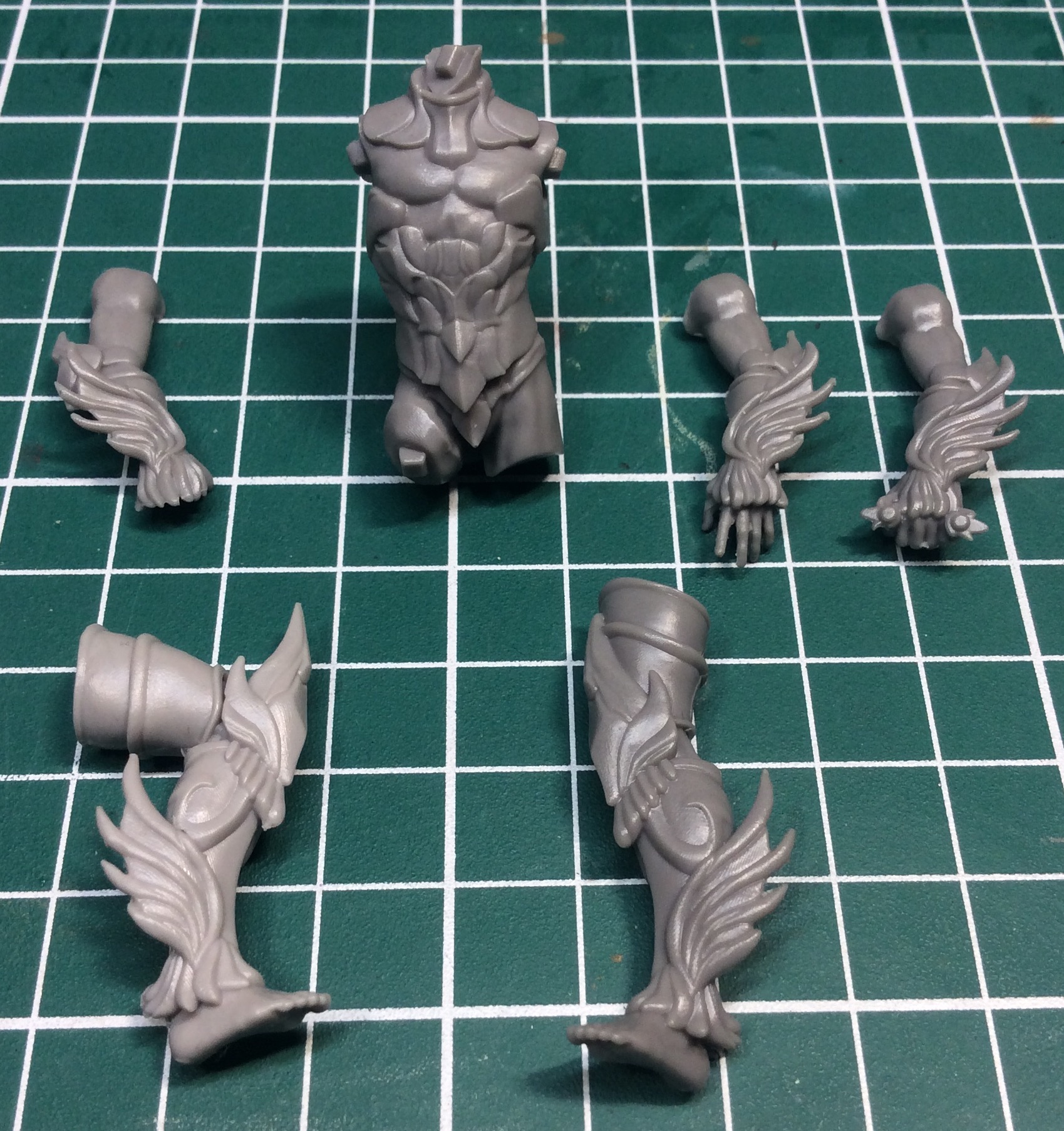 The two heads are really well sculpted too, the bare headed version seems to have an anime influence and the fit is very tight as the hair sits upon the armour collar, ensure you apply a good level of pressure to close the gap when affixing. The “helmed” head is my personal favourite though. The armour and accompanying parts such as the golden wings all continue to strengthen the concept of the Phoenix Lord, looking to be a mixture in design of feather and flame indeed the hair of Abel also seems to strengthen this visual clue. The fingers and toes are delicately sculpted and the folds and creases to the materials are dramatic and stylised. There are so many challenges or should I say opportunities here for the figure painter.

The right arm can either carry a curved scimitar type of sword or a rather ornate Elven looking spear whilst the left either depicts an open hand or the rather large shield. Again the shield continues the visual aspect of the concept being encased in elegant “flame”, the centre of the shield is a large, smooth open space perfect for a freehand design or some other special effect. The feet of Abel sit perfectly into the foot imprints upon the base, this attention to detail here means the figure is perfectly “rooted” to the base, it doesn’t look as if it is just balanced but is integral. 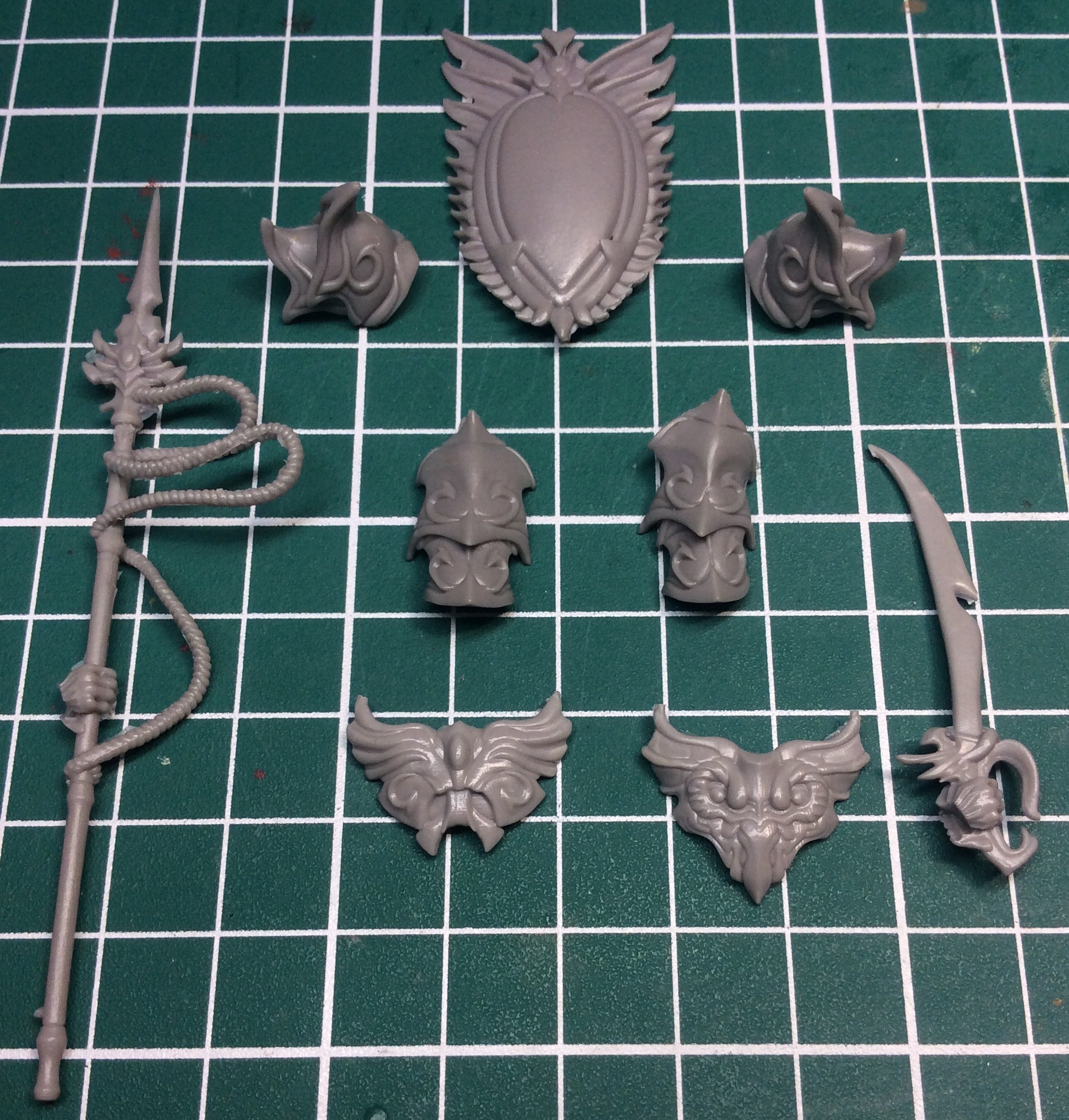 a selection of the accoutrements, armour and weapons

There are no major defects to the casting although in my opinion there are quite a lot of mold lines that need removing, especially so on the torso and limbs though not so much on the flatter pieces, yet that is merely a simple task of cleaning up with an hobby knife and should not detract from the sheer elegance, style and quality of the kit.

Kimera are taking the achetype fantasy protagonists and giving them their own narrative, style and interpretation. In addition to this the Pulvis range of miniatures will be a multi option release, there is almost a limitless way of assembling Abel. The design is well considered and the composition is balanced, there is a distinct virtue to Abel to counteract the evil of the previous release Dumah. Either configuration of Abel provide good balance to the pose and the design and composition is well considered. A lot of time has clearly been put into the development stage of this figure. 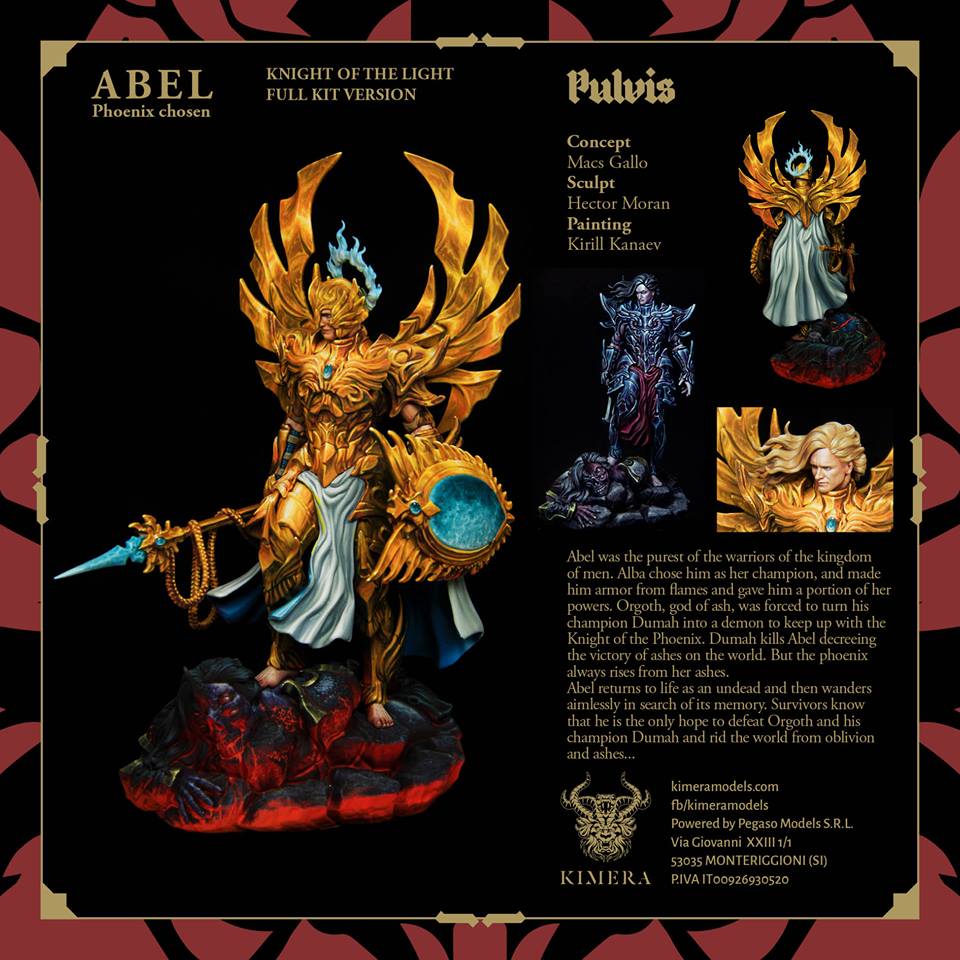 Kimera have been very steady in their advertising to date, just giving us all enough sneak peaks of the various boxarts, to generate a genuine interest in the product. I believe it has already grown a large following and their website mirrors the professionalism seen in their releases to date, stylish and particularly Artistic. It also sees what a lot of fantasy figure painters have wanted for a long time, resin figures from Pegaso Models! Throw in the art direction from Francesco, the quality cast, the archetype fantasy characters and I am sure this range will be very popular indeed.

The first 55 copies were on pre-order at €55 between 14 and the 24th of February, at time of writing we were still waiting for the kit be made available for everyone else. This price I believe is particularly competitive when you consider the presentation, the cast and sculpt, the Art direction etc.

Also we would like to provide credit for everyone involved in the Kimera project: