I have known Matty Pearce, the creative force behind RobotRocket Miniatures, (website currently under construction) for quite some time, often talking about figures, music, tattoos and whatever else friends talk about. I have been privileged enough to judge one of his Eavier Metal contests and regularly advised him on his painting, watching him grow as a figure painter in leaps and bounds. When he told me he was to create a new figure company I was a little surprised, this venture just seemed to come from nowhere yet I also knew immediately it would be a beautiful success such is his desire and commitment! 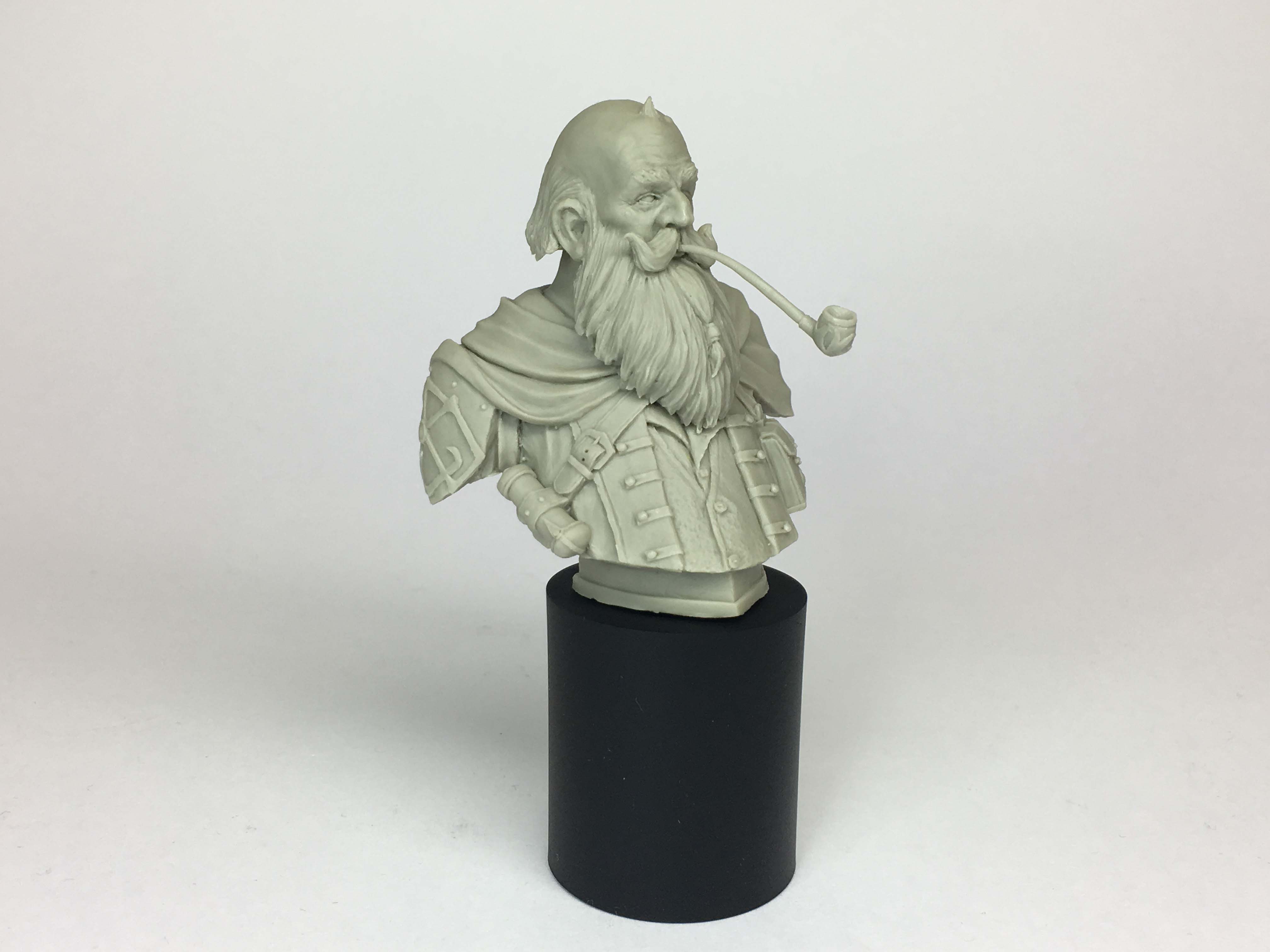 The first release, A Long Road arrived in a beautifully crafted, square, black cardboard box, adorned with a shiny black engraved outline of the logo. Removing the lid we are presented with felt surfaced foam, like that to display jewellery, beneath this first layer we have to dig for the bust, through thick, black paper shavings. We are also presented with a sticker, business card and a small length of dialogue describing the Long Road.

The bust sculpted by Olivier Boucher, is a single piece sculpt plus a small pipe that can either be placed between the lips or not, your choice. The pipe is sealed in a ziplock bag and I am quite frankly amazed at the quality of the presentation here, in particular for a debut release of a fledgling company. One last, pleasant surprise is the black pedestal engraved with the logo, wonderful idea! All of this for £35, first impressions are very good indeed, let us look a little deeper!

This is a rather traditional bust comprising predominantly head and shoulders and simplicity itself to prepare and assemble but a closer look shows this to be a kit full of textures and details! 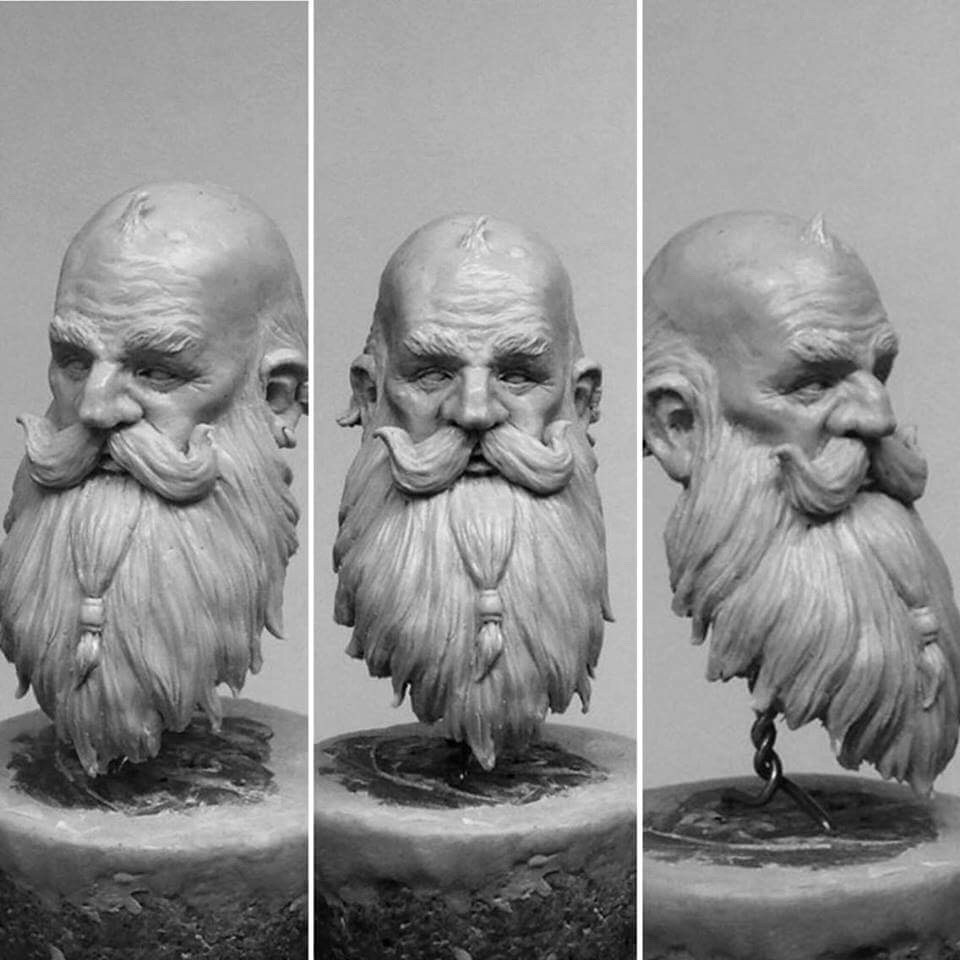 The face has wonderful details and although recognisable as a dwarf it also seems to have incorporated certain aspects that make it dissimilar to all the dwarfs we have seen previously. There is a more realistic feel to the sculpt compared to the illustrative dwarfs we have become use to. I really like the squat, hawk nose and the tubular rings to the left ear is another nice touch. The moustache and beard are particularly well done and add a scholarly air to the character. The whole sculpt comes across as a dwarf traveller or scholar which makes this more interesting in my opinion.

There is a hooded cloak around the shoulder and clasped somewhere under that voluminous beard. The anatomy looks spot on with broad, strong looking shoulders, the right protected by an ornately decorated piece of armour. Beneath the cloak we can see an open, broad “lapelled” jacket with nice seam and button detail. Beneath this we have what appears to be a waistcoat, displaying  a nice woolen texture, buttoned to the sternum with a sharp seam. The undershirt pokes out from beneath these layers, buttoned up with the collar open. I really like the various layers of clothing it really gives a sense of volume and you can almost feel the different fabrics. 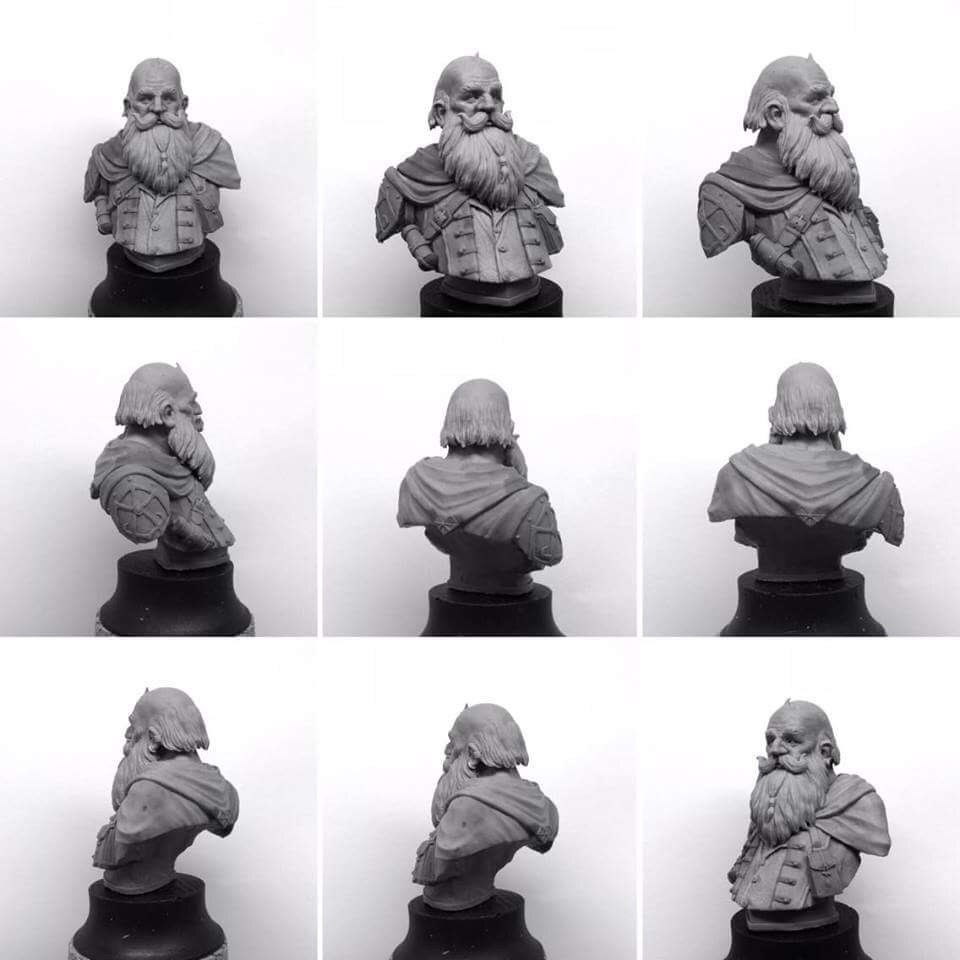 The cross straps display sharp undercuts, the buckles are intricately detailed, the pouch and map case? are nice details too, all of these visual clues can help the painter decide the character and narrative of this charming bust. The only other thing to discuss is the small, delicate, slender pipe, which needs careful cleaning along the stem and that’s it.

There are no major defects such as air bubble holes or casting slippages and for the most part the bust is devoid of mole lines although there is one down the centre of the hood and along the un-sculpted underside. The shaped pedestal sculpted to the bust needs a little smoothing then it’s time for a soapy bath and attaching to the free plinth that arrived with the kit, indeed the plinth could really help to hold the bust during the painting process.

I managed to speak with Olivier Bouchet the sculptor regarding the design of the character, here is what he said:

“A long road is a personal design and sculpt. I wanted to sculpt a dwarf bust with a realistic face, not a too caricatured or stylised one. I like a lot the book The Hobbit and I tried to restore it’s spirit with this little character. I imagined him as a traveller with clothes and equipment which can represent his past maybe that of a warrior. Hope painters will take a lot pleasure with the painting”.

I have to admit to a little disappointment that there were no robots or rockets with this first release but the quality of the whole project pretty much exceeds anything else on the market, especially the smaller, less established companies.

The design of the bust is very nice, it offers a great canvas for painters of all levels, lots of textures and details. The twist to the usual warrior or miner dwarf is a nice touch and it definitely evokes memories of The Hobbit movies. Whilst the dwarf remains an archetypal fantasy character and as such is not an original design or idea there is enough about this bust to separate it from other typical dwarf sculpts.

I grabbed a couple minutes with Matty too, here are his thoughts:

“Originally I had planned to do a fantasy piece for our first release a bit of subterfuge on my part maybe, but I realised with the company name and logo that maybe people would think that we would be a sci-fi one trick pony, I wanted to show people straight from the start that this isn’t going to be the case.. I had originally been working with another sculptor.

Unfortunately things fell through with this during the process and it left me needing to find another sculpt fast to stick to the deadline of April that I had set myself. A couple of days later I was perusing Facebook as you do and Olivier Bouchet had posted photos of this sculpt called A Long Road. As soon as I saw it I knew that this was exactly what I was looking for. It was full of character but also subtle enough to allow the painter room to do a lot with it, I’ve always found these to be the most popular type of miniatures. So I messaged Olivier and the rest just seemed to fall into place, fate so it seemed to me”.

The quality of the presentation, sculpt and cast really is quite exceptional not only for a first release but a release of any kind. Dwarfs are always a popular subject and I see no reason why this kit won’t do well and I will definitely be putting paint to this one and will be looking forward to the next release. Maybe there will even be a rocket or robot or two!!

At £35 we have now ticked all the boxes for a kit that I would buy, great quality at a great price! To be honest I have no idea how a new company manages to buy the sculpt, cast it and present it in such luxurious circumstances all for £35! Matty I doff my cap to you!

Where Can I Get It?         Matt@robotrocketminiatures.co.uk