I have been developing a great relationship with Kabuki Studio and several months ago was let in on a little secret. I was told of this collaboration with Frazetta Girls who had agreed a long term project titled “Frazetta Masterpieces”; Death Dealer will be known as Act 1! 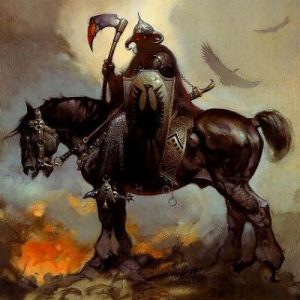 It is one of the most iconic pieces created by the legendary American artist Frank Frazetta and as such is the first release. I can’t comment on the packaging that will accompany the actual release as mine is one of the masters and packaging and boxart was not ready at time of press, but it arrived safely and quickly.

This is a 75mm scale, polyurethane resin kit consisting of seventeen parts and a scenic base, depicting that seen in the artwork. Our mounted warrior stands about 14cm in height and is traditionally sculpted by Jaroslaw Smolka.

This wonderful piece can be purchased via Kabuki’s current KickStarter campaign at a reduced price and WILL come with a selection of FREE and EXCLUSIVE items only available through the KickStarter.

Death Dealer is a 1973 painting by Frank Frazetta (1928-2010), who was noted for comic book, novel and LP record album covers. In 1995 Frazetta was inducted into the Will Eisner Comic Book Hall of Fame and four years later the Jack Kirby Hall of Fame.

His grandmother was one of his main supporters and encouraged his art throughout his former years and in 2010, just weeks from his death he recalls:

At just eight years of age, he attended Brooklyn Academy of Fine Arts. At sixteen he began working with Bernard Baily and although, full credits at that time were rarely noted, it is believed his first work was the inking to an eight page story titled “Snowman” in December 1944.

Although Frazetta acknowledges Graham Ingles as the man who really recognised his talent and to get him work at Standard Comics in 1947. Into the 1950’s and he was soon working on many comics covering most genres and began assisting Dan Barry on the Flash Gordon daily strip. 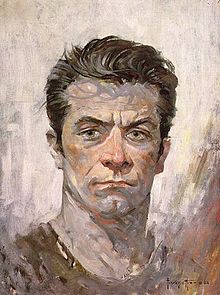 Into the 1960’s and his work for paperback book covers saw an evolution in his art and what would become his legacy. His vision of Conan changed the world of fantasy genre, and more so, the sub genre sword and sorcery. From here on his work was in great demand and he went on to do covers for Edgar Rice Burroughs books such as Tarzan and John Carter of Mars (Barsoom). His paintings including Death Dealer appeared on album covers such as those by Molly Hatchett and Nazareth.

Frazetta never relinquished his original Conan paintings which were displayed in the Frazetta Museum, Pennsylvania. I believe the Conan the Conqueror painting was sold for $1mn in 2009. His latter years saw some controversy and illness, sadly his wife “Ellie” passed away after a year long battle with Cancer. In 2010, Franks’ children came together as a team to promote and protect his legacy and artwork, Frazetta Girls was born. I had the opportunity to speak with Sara Frazetta and here is what she had to say:

“I never imagined that I would be involved with the Frazetta legacy. My grandfather and I were very close. I spent countless hours with him each summer when I would return to Pennsylvania. We would play the original Nintendo, watch Laurel and Hardy films, eat candy and simply enjoy laughs and hugs. He was incredible in every way. I always looked at the art as part of him, not as a business. When we lost him in 2010 my mother and I were given an opportunity to continue his legacy and we did just that. I feel honoured that I could fulfil my grandfather’s wishes. 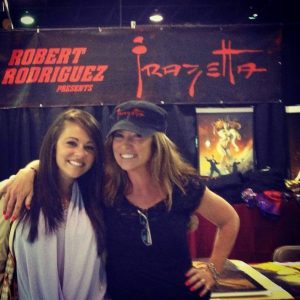 Death Dealer is Frazetta’s legendary character he created in 1973. It was first seen by many on the legendary band, Molly Hatchet’s album cover. Under his iron mask and beyond his bloody hatchet, the Death Dealer is still such a mysterious character. With Kabuki Studios and other future projects, we are able to get a better sense of who this character really is.

Kabuki Studios has done a fantastic job with bringing each brush stroke from Frazetta’s canvas to scale in these hand crafted models. The Frazetta Girls and Kabuki Studios are proud of this collaboration and hope that you will support our Frazetta’s Masterpieces series”.

First impressions are so good! I can’t believe that my favourite fantasy character of all time is sat in my hands as a scale resin kit! The kit can be basically broken down into two sections, there are the three large parts (the base, front and back of the steed) followed by a bag of smaller parts. The base depicts the artwork strewn with skulls and skeletons and has indentations and holes to receive the pegs on the warhorse’s feet. 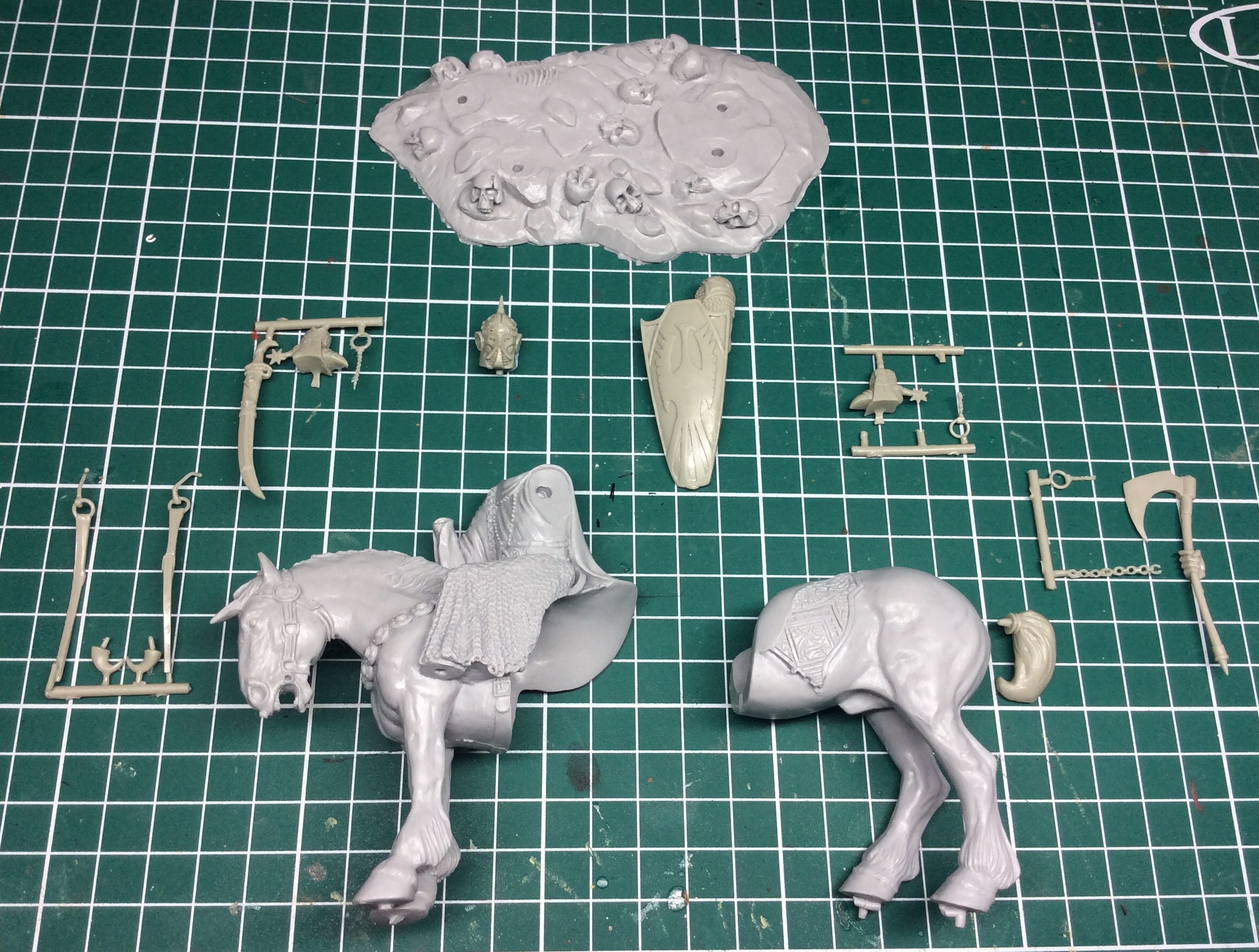 The two parts of the horse go together nicely and unlike other mount kits I have seen before there are no gaps to fill or joins to hide. This is a perfect 3D representation of the artwork, down to the patterning of the saddle, the decorative barding, harness, Death Dealer’s chain-mail and flowing cloak. 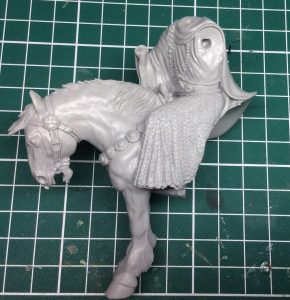 front section of the steed includes torso of our helmed hero

Miroslaw has done a fantastic job sculpting this kit, you can almost feel and see Franks’ brushstrokes throughout, especially in the musculature of the steed. The left arm carrying the distinctive shield attaches via a pin and there’s no need for gap filling and same can be said for the right arm holding the axe.

The booted feet with spur and stirrup attach nice and easily too and show the crisp detailing we now expect. Every piece is lavished with the detailing that we see in the artwork and the horned helm in particular is very nicely done.

The resin reins are a nice touch and will make assembly of this tricky component much easier. The kit goes together very nicely and I couldn’t see anything that would need gap filling.

The cast by GRX Creations is really well done, capturing all the moulded and engraved details, providing sharp undercuts to the details and trims. It may have been an idea if some of the parts had two pins and two holes to assemble, that way you would ensure the correct angle and position of certain parts such as the helm. 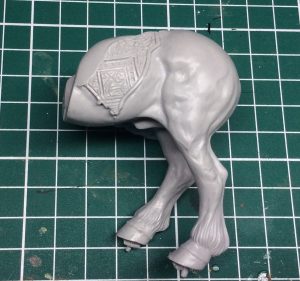 see the brushstrokes of Frazetta in the musculature?

There are one or two small moldlines, in particular on the steed and there are some excess tiny blocks of resin that will need removing on some parts. Take care removing them from the sprue and when filing smooth, the lengths of chain etc are a little fragile.

There are no other defects such as air bubble holes or casting slippage, assembly should be quick and easy and then the kit will need washing in some soapy water prior to priming!

I spoke with Marc Masclans about the kit and here is what the artist had to say (N.B. there will be a SBS tutorial available for certain pledge levels on the KickStarter):

“As for many others, Frank Frazetta has been a great inspiration to me. His illustrations, colour treatment and style have always been a reference and something I admired. It has been a pleasure to have the chance to paint a box art from such an iconic character as Death Dealer. 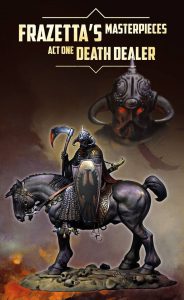 As with other jobs I have done before, painting a 3D subject from a 2D illustration is not always easy, especially if you are playing with back lights or strong contrasted shadows. Considering this, one has to adapt the painting to make it the most likely as possible without missing the 3D possibilities.

I have to admit that it hasn’t been easy for me and probably I would like to paint another version with another idea which would be more personal to myself and my style. For me it was not easy trying to copy colours and brush strokes.

But in the end I’m satisfied with the final result and hope that soon we will see other version of this incredible miniature”.

Death Dealer with it’s distinctive silhouette is instantly recognisable, the pose is actually quite static yet exudes malevolence and brutal terror. Despite its’ sedentary pose the feelings that this piece generate in the viewer makes it far more dynamic than you first realise. The composition is well balanced and the four feet firmly planted on the ground adds to the sense of weight and foreboding. 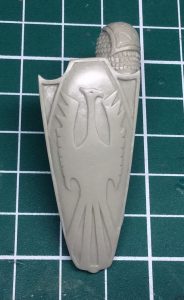 the iconic iconography on the shield

We can’t particularly say the kit is original in one sense as it is an exact replica of the stunning artwork however, this is the first time that Death Dealer has ever been presented as a resin kit. I for one am extremely happy that Kabuki have the licence to create these characters and the partnership with Frazetta Girls shall see many more designs realised and released!

The works of Frazetta changed the world of fantasy art and many of us fantasy figure painters have always hoped that one day we would get the chance to put brush to one of his creations.

I can’t think of a more desirable fantasy subject for our hobby! I am pretty sure this is a must have and the KickStarter has been planned to be just as attractive for the collector as it is for the painter. 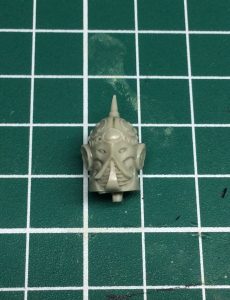 As the KickStarter stands at the moment, in addition to the figure, the following additional items have been unlocked for FREE: display background, step by step painting guide by Marc Masclans, Death Dealer bare head and a metal plate for your plinth! For those who missed the early bird, the kit will cost €100 including shipping within Europe.

There are a host of different pledge levels for this project so I would strongly suggest you take a look for yourself! I am confident that there is something affordable for everyone there!