We took a break in December to let everyone enjoy their holidays, but now we’re back and ready to share what we’ve been up to.  We’d also like to introduce our newest team member: Nils Holmbergh!

This month I spent most of my time frantically finishing the Sail Away bust from Broken Toad. It is a rather pretty and original design but one which came with some complications. The ship itself is tiny maybe not much bigger than a 5p piece and the masts and sails were particularly delicate. I have already seen a version on the internet where the painter, whilst removing the sprue from the top of the sails also removed the horizontal mast, their sails are floating! 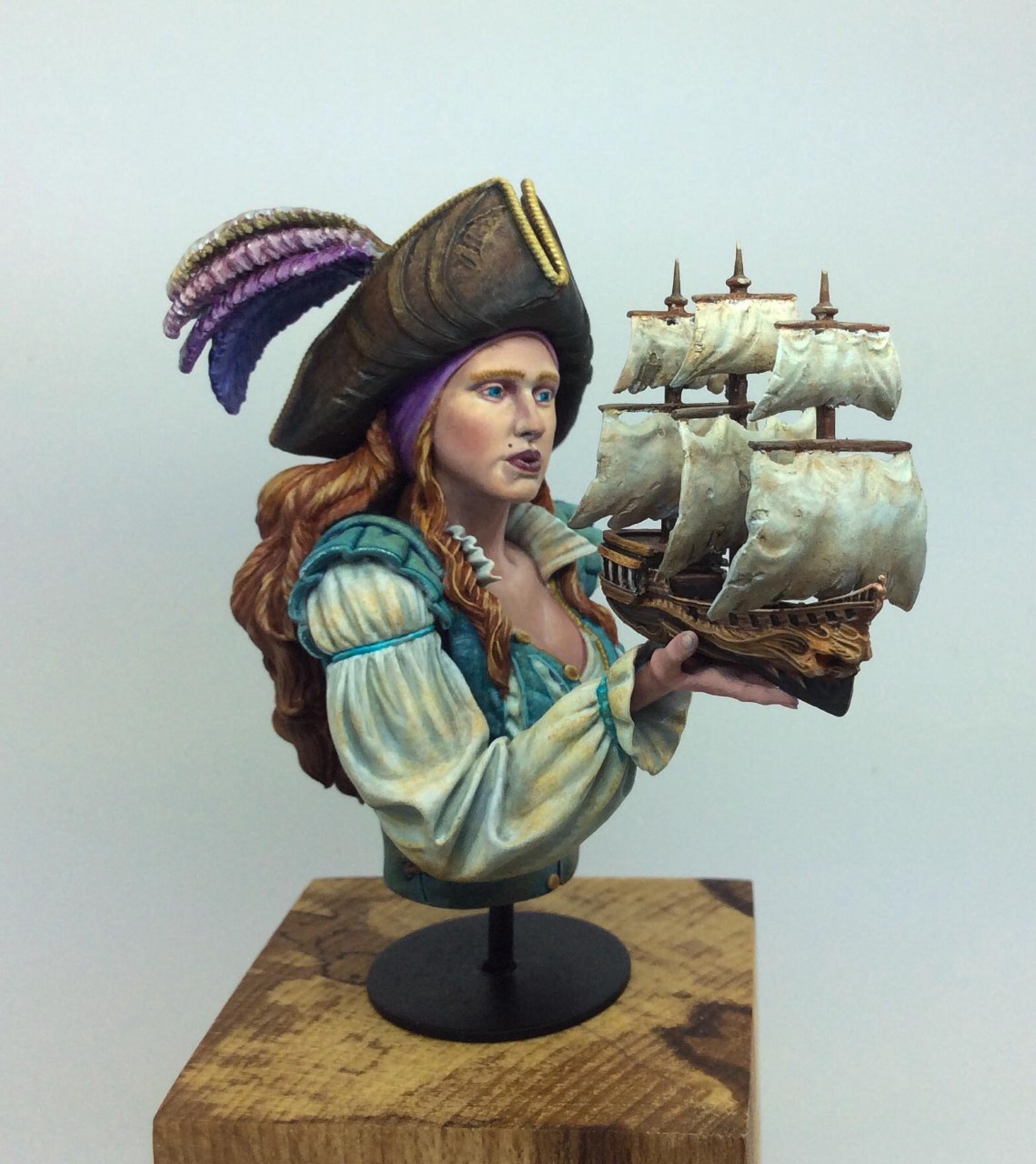 Another issue was that there are no location marks on the masts to determine where to attach the sails. I would suggest  dry fitting to ensure it looks correct and that the bottom sail clears the deck of the ship before gluing everything into place. Each mast is of a slightly different length, depending on it’s position along the ships’ deck, so again take care to glue the correct one in its’ correct place. 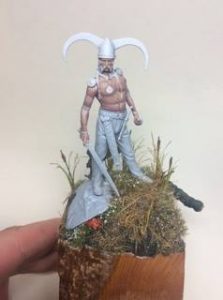 I really enjoyed the painting of this bust and was particularly happy to be offered support and advice from Pepa Saavedra, in my opinion the best painter of the female form in our community. She advised me to forget everything I had learned about painting skintones before (I had never painted a female  before) and that the skintone needs to show some colour but without strong contrasts or shadows, the skin had to be far lighter and much smoother in the transitions than anything I had painted before.

I made a mistake by attaching the arm before painting the eyes, this meant access to this area was more problematic than it needed to be. In addition, I couldn’t focus enough attention on the eyes so in my opinion the eyes are very disappointing, they lack expression or at least I could have created more expression and a greater depth of detail if I had better and easier access. There will be an in-depth, informative PDF on Perfecting a Female Skintone on my PATREON in the coming weeks for all supporters who pledge $6+.

Over the last month or so I have developed a real interest in historical miniatures, I had never really paid them much attention before, I had always been a fantasy painter, yet I have become a little disenchanted with that genre. Each new release is met with such furore and within a week or two the internet is awash of cool paintjobs, I just feel a little like I want to paint something different, something that hasn’t, in my opinion, been done to death in a short period of time. That is not to say I won’t still be painting fantasy figures, there are stunning releases every month, but for now historical figures have my muses attention!

The figure I have just started is the Celtic Chieftain III Century from Romeo Models, the sculpt and cast is incredible. I began this project a little different from normal, by creating the scenic base first, I am interested in seeing how that affects the way I take on the challenge of painting the figure.

My name is Nils and I’m an avid miniature painter from Sweden. I’ve been painting since I was introduced to miniature gaming back in 1994. During the last three or four years I’ve switched from painting gaming miniatures to bigger miniatures. 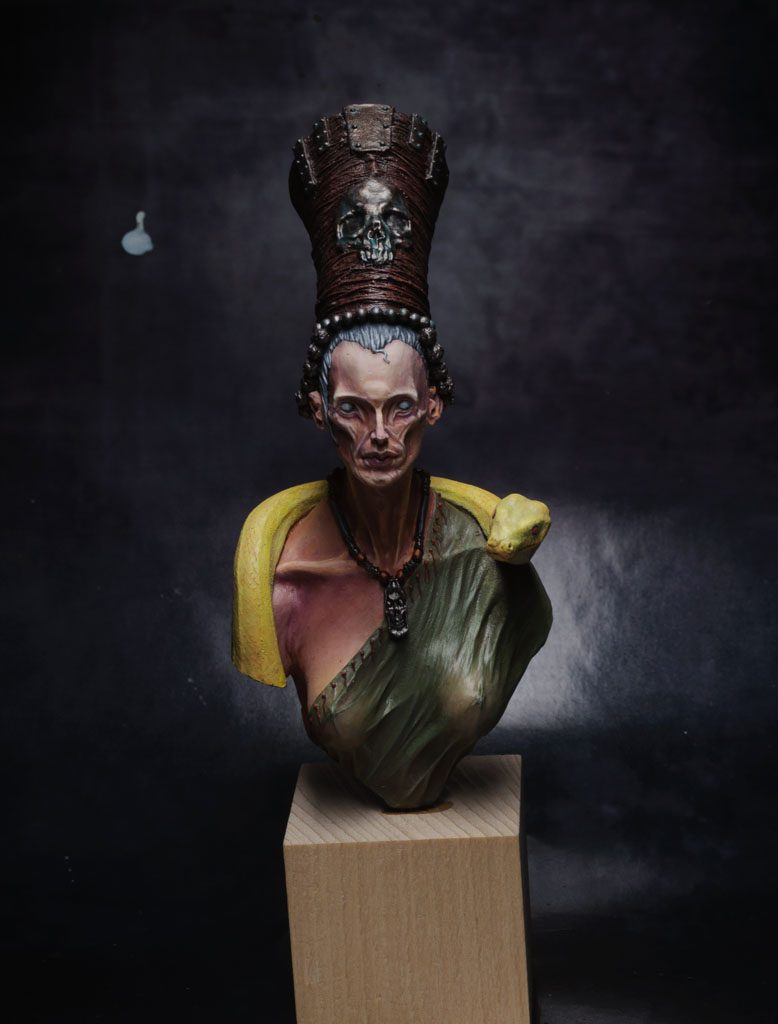 To this day I’ve mostly worked on fantasy miniatures but I’m planning on painting at least one historical this year as history is also a very big interest for me.

Painting miniatures is my main hobby and my biggest passion and it’s something that I feel is a very rewarding artistic outlet and has a fantastic community. 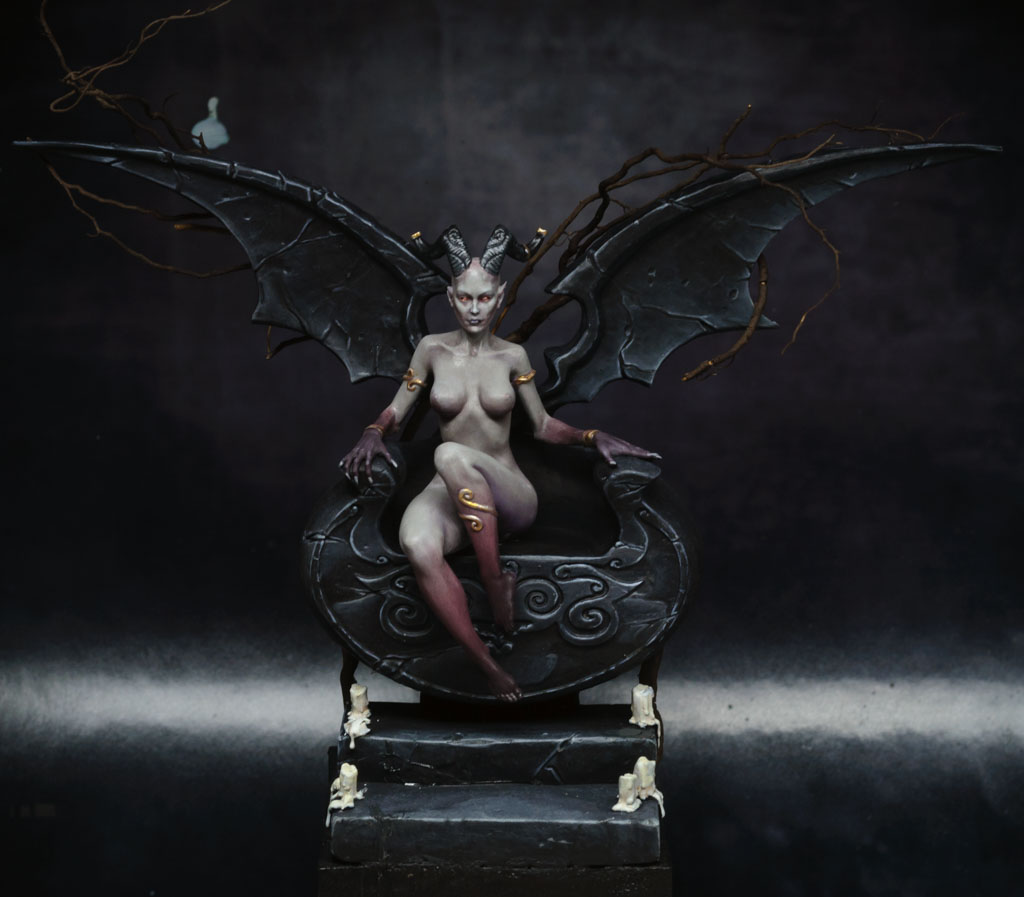 I just finished my latest project a couple of days ago, the Queen of the Night bust from Black Sun Miniatures. I think that the sculpt has a creepy feel and I wanted that to show in my painted version but at the same time I didn’t want her to look unnatural. I decided to paint her in a normal look and use her eyes for the creepy effect. 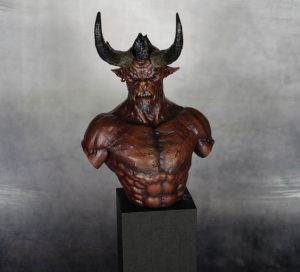 The project before that was also a Queen but this 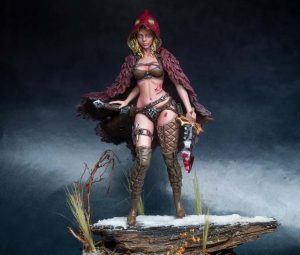 time the Queen of the Witches from Aradia. The sculpt to me, gives a kinda dark and cold but not evil feel and I wanted to have that in my painting as well.

I chose a minimalist colour scheme, almost grey scale and quite cold.  I used a reddish mix that I blended in on her arms and legs to make her stand out from the throne as they have more or less the same basic colour scheme.

Here you can also see two more miniatures that I painted right before the Queens, Red Riding Hood from Nuts Planet and the Shaetann bust from Mproyec.

It’s been a busy few months, which 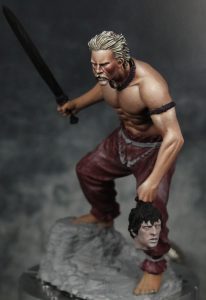 unfortunately hasn’t left much time for painting.  But I did make some progress on the 70mm Celt.  I did a bit more work on the skin, shading and highlighting one of the arms.  I got a bit tired, so I decided to change it up and go back to the face.

I decided to take a crack at the hair (one of those things I usually dread painting).  I normally tend towards brown hair, but felt this guy needed to be blond.  In fact, the Celts would lime-wash their hair, so I wanted to push it towards a pale blond as well.  I had based it using Secret Weapon Miniatures (SWM for the sake of brevity) Old Mud.

I picked up their set of colours at Adepticon and have been slowly trying them out.  I used a bit of Reaper’s Mahogany Brown to darken a few spots.  Then I switched the SWM’s Light Dust and gradually blended from Old Mud to Light Dust.  From there, I started to mix in 50/50 SWM Weathered Wood and Reaper’s Palomino Gold (a pale yellow).

Finally, into the mix of Light Dust, Weathered Wood, and Palomino Gold, I started to add Reaper’s Linen White.  I took the hair all the way up to pure Linen White at the tips.   All in all, I’m pretty satisfied with the resulting look.  Since most people probably aren’t familiar with the SWM paints, what I used were a medium brown (Old Mud), a light brown (Light Dust), and an off white (Weathered Wood).  That, plus a bit of pale yellow seemed to do the trick!

Once the hair was done, I went back in with some glazes to add a bit of colour variation to the face.  I used a bit of blue glaze on the chin and jaw to hint at stubble.  I kept this very light as I didn’t want to create a strong effect.  I also added glazes of red on the cheeks, tip of the nose, and bottom of the ears.  I went stronger with the red, but still did not want to overdo it.  You can see in the side by side comparison how it creates some subtle changes to the face.  The first image is from before I did the hair, the middle image is with the hair completed, and the final image shows it after the glazes.

It’s important to do the glazes last, since it becomes very hard to match colours once you’re done.  So, if I ‘d glazed first and then did the hair, I would have a hard time correcting any mistakes (getting some of the paint for the hair on the cheek for example).

That is it for this month everyone, I hope this gives you an insight into the work that we personally do, thanks for reading and supporting our blog, without you guys none of this would be possible!

Joyful modelling everyone! Keep on painting!!