An Insight Into Atlantis Miniatures

Atlantis Miniatures came to attention back in 2016 on the back of a successful Kickstarter campaign to release their first run of Trolls, Orcs, Goblins and Monsters. Demand for their figures was high and the inevitable issues back delays and planning came to the fore. As a small indie, UK company, I can only guess at the workload involved, designing, sculpting and casting all of their figures, growing the range and meeting the demands of a monstrous Kickstarter campaign! Yet here we are in 2017, with new figures being cast, a new campaign on the horizon and an ever growing demand for more monsters! Oh and the Dwarves are coming, pre-order for April 2018 and there are some superb miniatures planned.

I have followed Dan Jack’s project since the very beginning and I am a little honoured he trusted me with a write up about Atlantis Miniatures. It has been a while since I intended to write this but never had the opportunity. Atlantis Miniatures sent me a selection of their figures and I wanted to give an overview of their quality an insight into their design and originality. My figures arrived, in this stunning, box, matte black with embossed logo to the magnetic lid top, Each was wrapped sealed in a ziplock bag, wrapped and packaged snug and safely. First impressions of the casting and sculpt is very good and bot some of these creature are huge!

The range of figures from Atlantis Miniatures are 28mm in scale however, as these are monstrous creatures most are considerably bigger. Take for instance the Ettin which stands at 140mm in height and consists incredibly of just four parts! One of the advantages of these figures is that they are definitely designed with the gamer in mind, in the sense that preparation and assembly is minimal, you can get straight to the painting and gaming. That being said a great number of these figures can easily be painted to competition level. The figures are designed in Zbrush and digitally printed, the print is of a high standard, a lot of the time I see the concentric lines of each printed layer, but not here. Some of the detailing looks a little soft, particularly with the older figures but Atlantis Miniatures are striving to continuously improve their product. 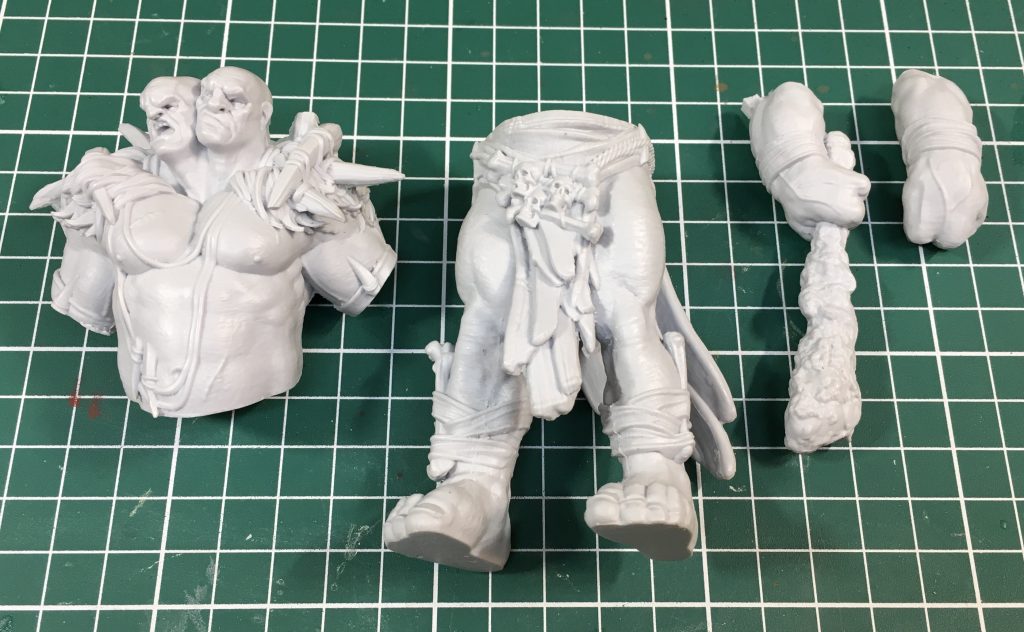 The anatomy is oversized, brutal looking, ideal for Trolls and Orcs, large muscle groups, hulking chests and broad shoulders. Each figure is full of details and various elements, that offer the painter a host of options for painting. There are textures applied for instance to the coarse skin of the creatures and the various garments. Another thing you will notice is how the figures are cut, there are no natural joins or pegs. For instance the larger figures are more often than not cut straight and horizontally at the waist, this means I would definitely pin the parts. The use of polyurethane resin means the poses and dimensions are not restricted by weight limitations.

The mountain troll is one of my favourites and despite it’s bulk it consists of just two parts and a scenic base, the base itself has indentations to receive the troll, a perfect fit. The texture to the skin and the jutting rock formations make this a particularly attractive piece to paint. Again I have some reservations about the depth of the detail, in certain places the figures lack a certain finesse. The cave troll, the smaller cousin to the mountain troll, again just the two pieces, is once more full of details and textures. One of the main draws to each and every figure is the dynamism and movement involved in the poses, which when you consider the number of pieces involved and the cut is in itself quite an achievement. There are some minor defects to the casting but nothing to cause any concerns, a little filing and sanding. 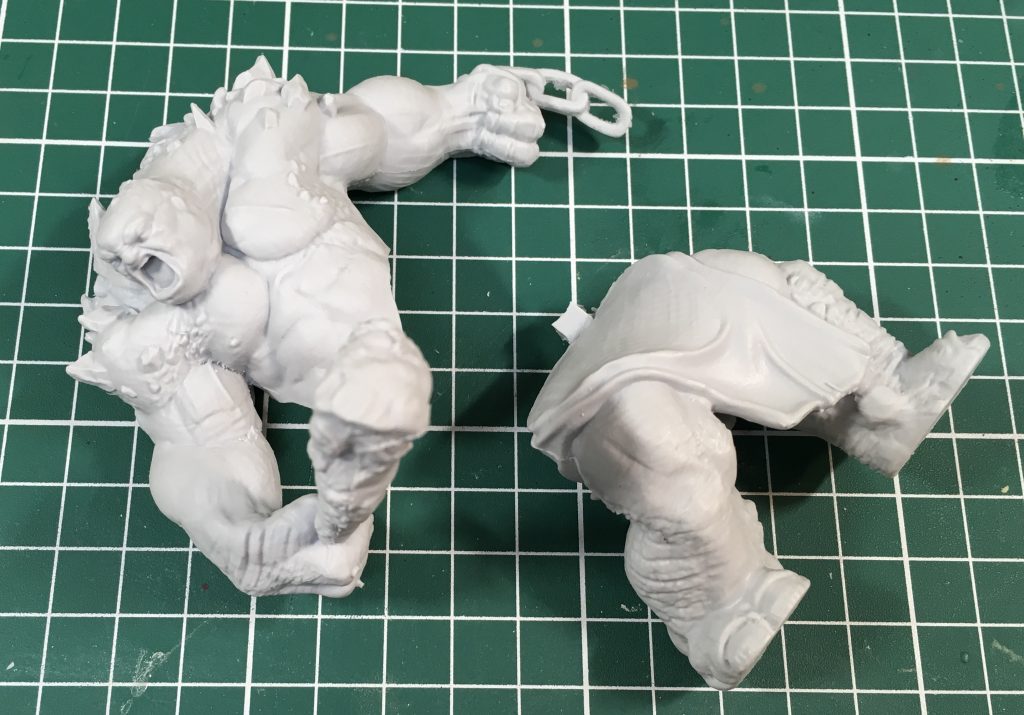 There are no major defects such as air bubble holes or casting slippages. There are some large casting plugs that will need cutting away and filing smooth too. The smallest of the trolls I received is the stone troll and remarkably comes as a single piece. Textures, details, hulking anatomy and a cool pose again, we are beginning to see a trend here right? Talking of single piece miniatures, the Orc King comes with monstrous mount, a large, tusked overly muscular, four legged walrus looking creature, with pagoda. Cast as one piece, a big lump of resin but again, displaying nice pose and details. The texturing to the coarse skin is nicely done with folds, wrinkles, scales and callouses, along with the “rocky” textures that is prevalent with the trolls. 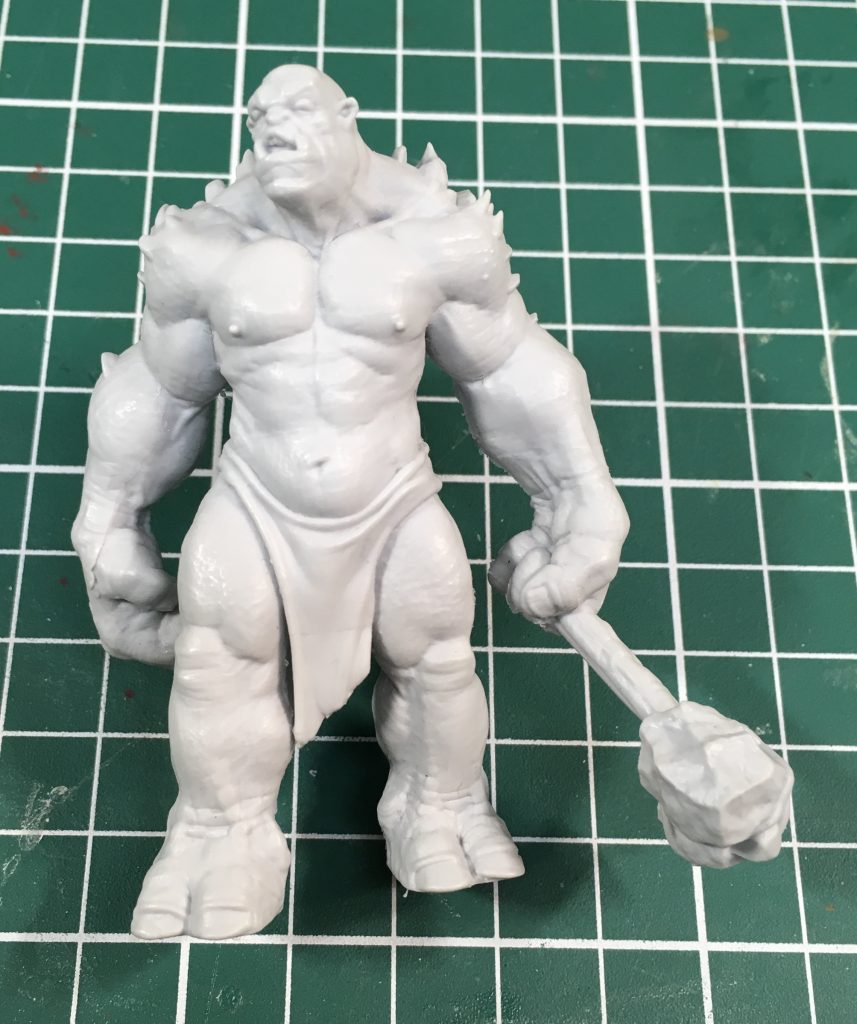 The Orc King himself is sculpted as a two part piece and is attached to his “saddle” which sits upon the mounts back, there are no locator pins but as with all of the parts I have looked at, there is a natural fit. The King is matched in size by the Orc Shaman, again cast as two parts, tribal and feral in design holding his rams head staff aloft.

I grabbed the opportunity for a little chat and the following is a summary:

“Currently we are in the production stage of our Dwarf kickstarter which is on track and comfortable for our April shipping date. We’re getting very close to ending our KickStarter prices on the store, if you have not seen there are some massive savings on a whole host of figures in line with our original Kickstarter prices, grab a bargain whilst you can!!

We have another smaller kickstarter in progress for late this year ‘mythology’. It will include characters like cyclops, manticore, chimera, hydra, Cerberus etc. We’re hoping it will cater well to painters and the roleplaying game market.

Beyond that, we already have a core ogre set blocked out by sculptor: Mike Amor for release next year and beyond that we are getting closer to starting our woodlands themed release including wood elves!

The process of creation is mostly done in 3D. We collect images and reference to steer the path of the design but we do skip the 2D sketch stage which may seem odd to some people. We make most of the ‘happy accidents’ and developments by quickly chucking around shapes in zbrush. The first pass can look very messy. But it’s more about the design at that stage. Once we’re happy with where it’s heading we start swapping in more refined versions of the parts.

We are considering digital sculpting videos for our miniatures in the future.

The pipeline is all based in the U.K. From sculpting, printing, casting to shipping”. 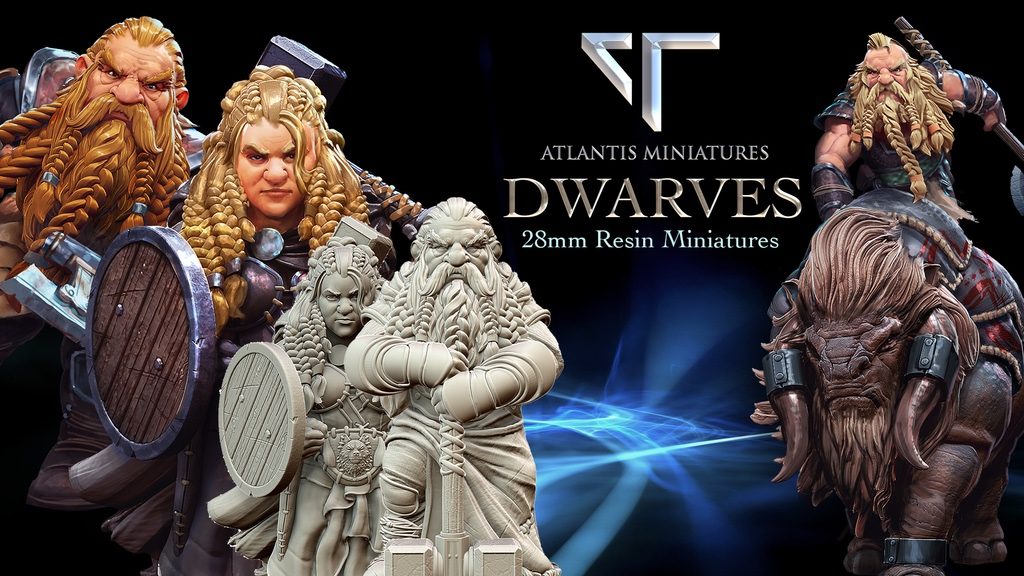 These are the archetypal fantasy characters that we grew up with in film, novel and then on the table top. There are influences from Lord of the Rings and Hordes and I really like the figures. A lot of them are in dynamic poses which will surely add to their collective aesthetic when all painted up on the table top, ready to go to war. Atlantis Miniatures have built up a loyal fanbase and the future plans will surely bring more to the fold over the next 6-9 months. There are some big plans for the future and I look forward to seeing how the range will develop.

A lot of these figures are huge because of their monstrous proportions and their prices remain very good however, the best bet would be to take advantage of the Kickstarter prices, I don’t recall many if any other companies offering Kickstarter prices to their regular customers, grab a good deal while you can.