The Harbinger of Death – An In-Depth Review (Galapagos Miniatures)

The Harbinger of Death – the PRELUDE

This 13 part Polyurethane Resin figure consists of 13 parts, cast in 90mm scale and sculpted by Ju-Won Jung. The Harbinger of Death otherwise known as the Spectre who prophesised the end times is a mesmerising and stunning new release from Galapagos Miniatures!

“A flock of blind crows appeared”. 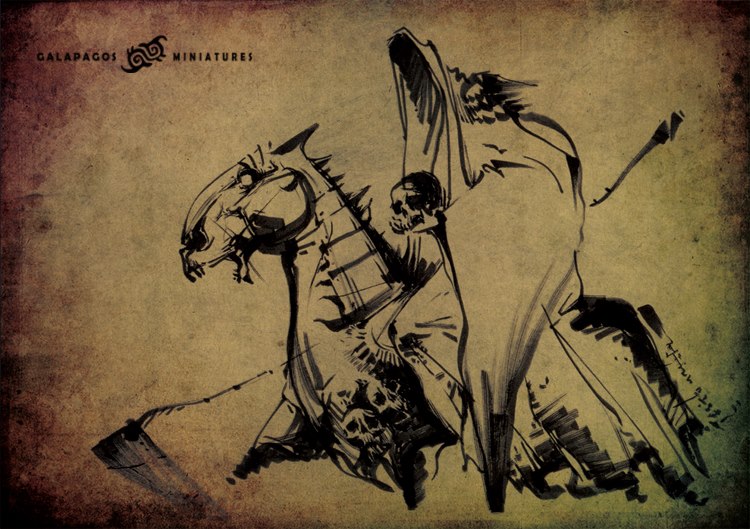 The kit arrived in it’s high end, easily recognisable sturdy box adorned with the box art by Ju-Won Jung himself, on opening the box we see the phrase “open your own world” which is exactly what happens each time you make a purchase from Galapagos! The parts are protected between layers of cut out and shaped foam, the smaller pieces sealed in a ziplock bag, we have two different lengths of support rod, solid brass or clear acrylic for a more ethereal finish. We also get a concept art card and on the reverse we have some narrative and a authentic wax seal. First impressions are extremely good indeed! 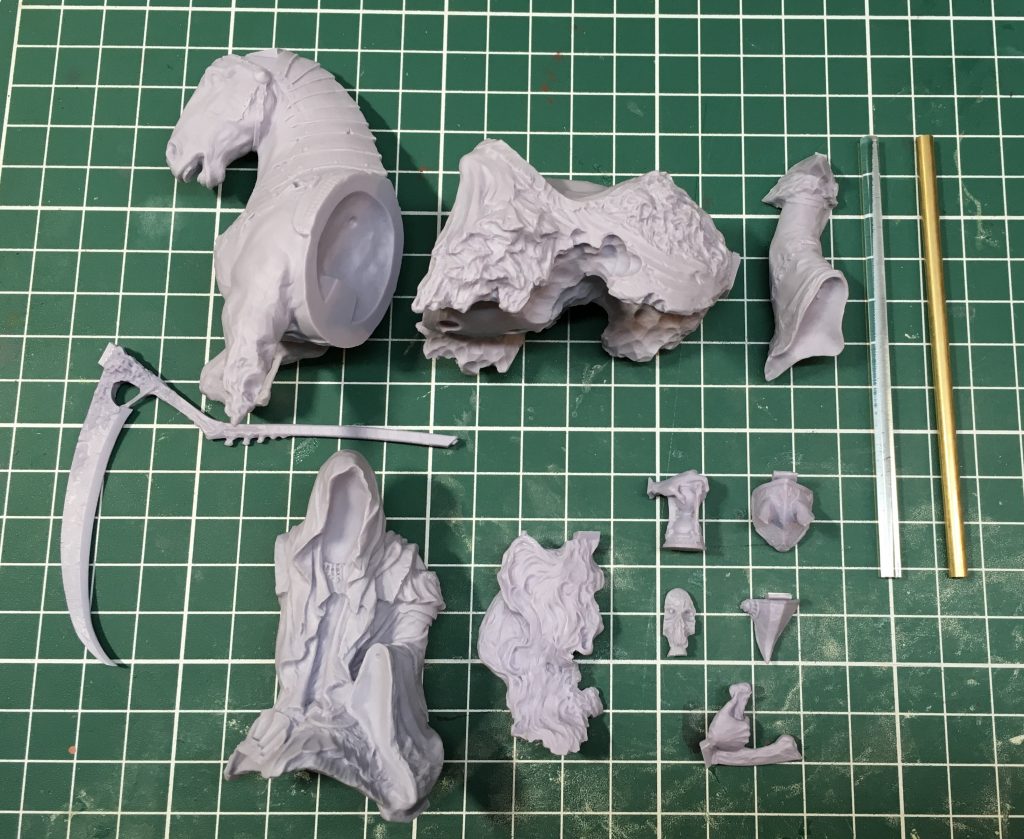 Where to begin, The Harbinger of Death is stunning. let’s start with the spectre himself, clearly a concept based on the Four Horsemen of the Apocalypse, it sits atop his steed, partially manifested, the almost unfinished feel to the figure heightens the ghostly manifestation. The hooded robes are ancient, dusty, tattered and flowing from his skeletal form in such a way to tell us exactly who is hidden beneath. 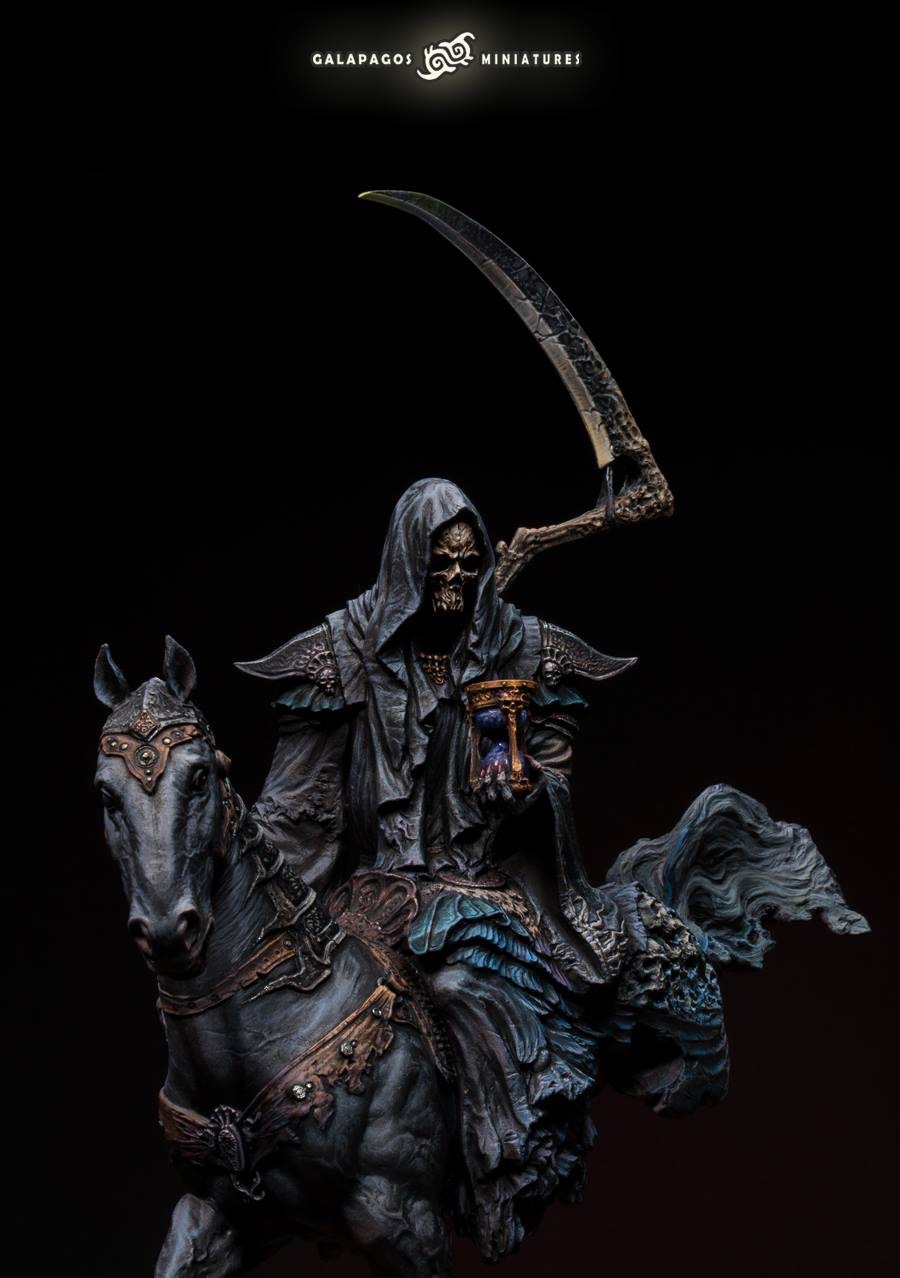 The hooded area has the option of including a flat backed skull or leaving empty depending on the result you’re after. The left arm tucked into the side is cut at the wrist to receive the hand holding the hourglass of life and death,the right arm is a complete separate piece attaching at the shoulder via a double peg and hole assembly. 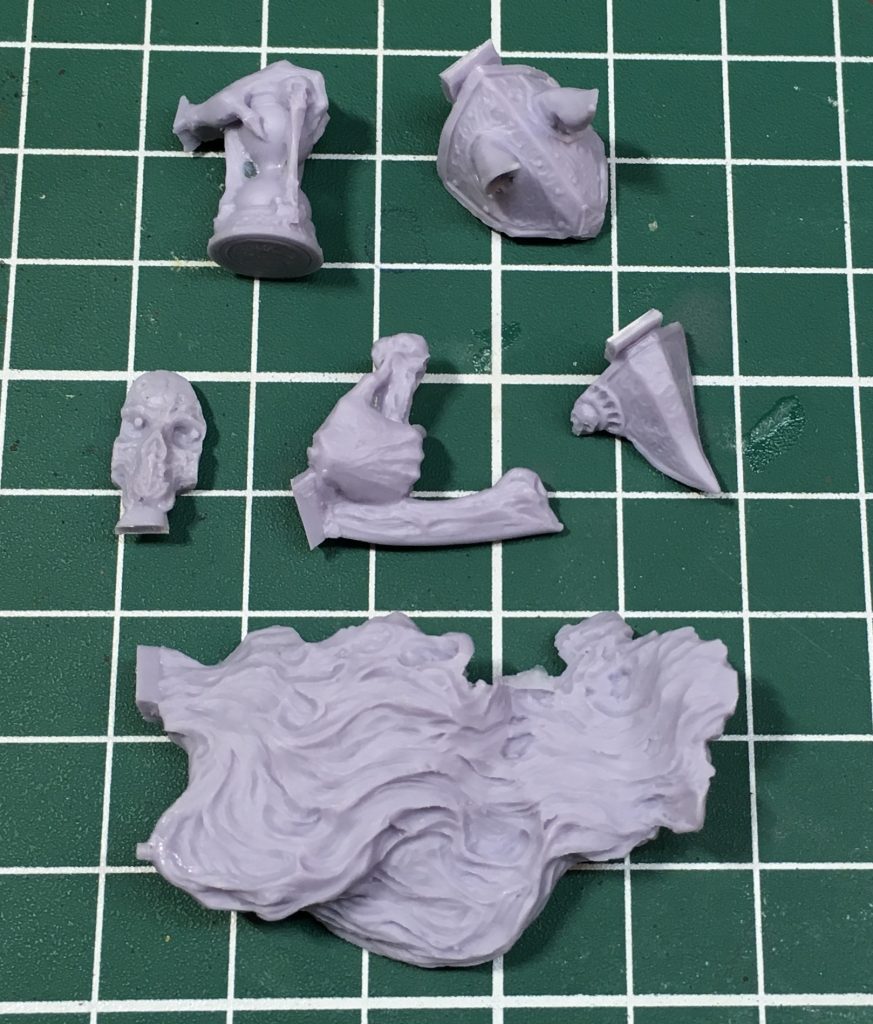 Detailing to the smaller pieces

The wrist resting on the thigh as he wields a cumbersome looking scythe. The scythe in effect comes in two parts, the head and handle length along with the hand that grasps the reversed handle. The base of the blade is adorned in embossed skull motifs, a symbol of the trapped souls within the reapers blade.

If the Reaper himself has not got you hooked already the surly and imposing steed surely will, a mix of the classical mount mixed with fantastical elements has really brought this creation to life. The horse consists of four parts, head and front legs, the rear, tail and ears. The two halves slot together perfectly with an ingenious cut, no need for gap filling whatsoever! Each half has it’s own rather unique styling, the front end is full of strength and power whilst the back is ethereal, ghost-like and intangible.

Wonderful detailing to the steed

The ends of the front legs end almost as wisps of smoke or ectoplasm as the Reaper materialises. The armour and strapping is particularly well done, sharp undercuts and crisp detailing to studs and buckles. The very top of the horse head and ears is separate and attaches via a wedge to the top of the head. The musculature and texture to the steed is wonderful, the veins another clue to the straining mass, eyes wide and mouth open, head tucked in slightly looking quite menacing as it should do. 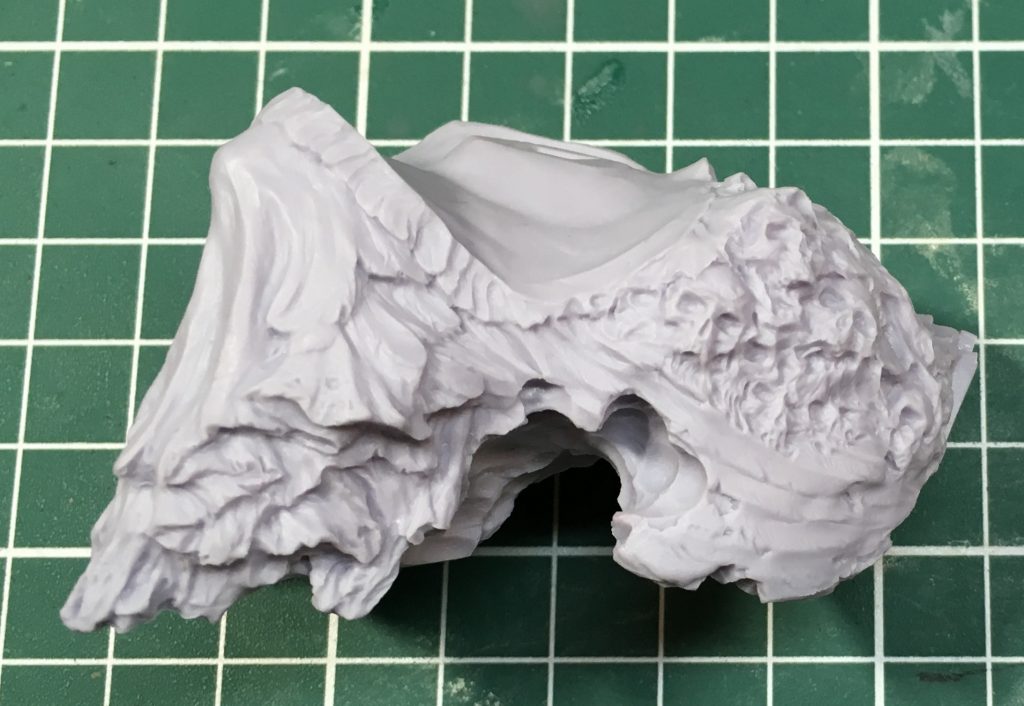 The rear end displaying the screaming souls in skull motif

The casting is of the highest quality, no major defects such as air bubble holes or casting slippages, some resin blocks to cut away and file smooth here and there, but preparation should be minimal. What a wonderful figure!

“The voice of Ruggol, the sage of Merthe, was filled with fear. He rushed straight into his library, ordered that no one be let in, and sealed off the door. In the library was his life’s work, books enveloped in burgundy leather and sealed with ancient scripts. All of the pages were filled with the vestiges of Ruggol’s being. Curiously, the illustartions were fading away…….”

The design of The Harbinger of Death is simply phenomenal I do not recall too many figures where the first time I saw it, I was truly awestruck! From the moment Ju-Won Jung started showing glimpses on social media, the painting community fell in love. 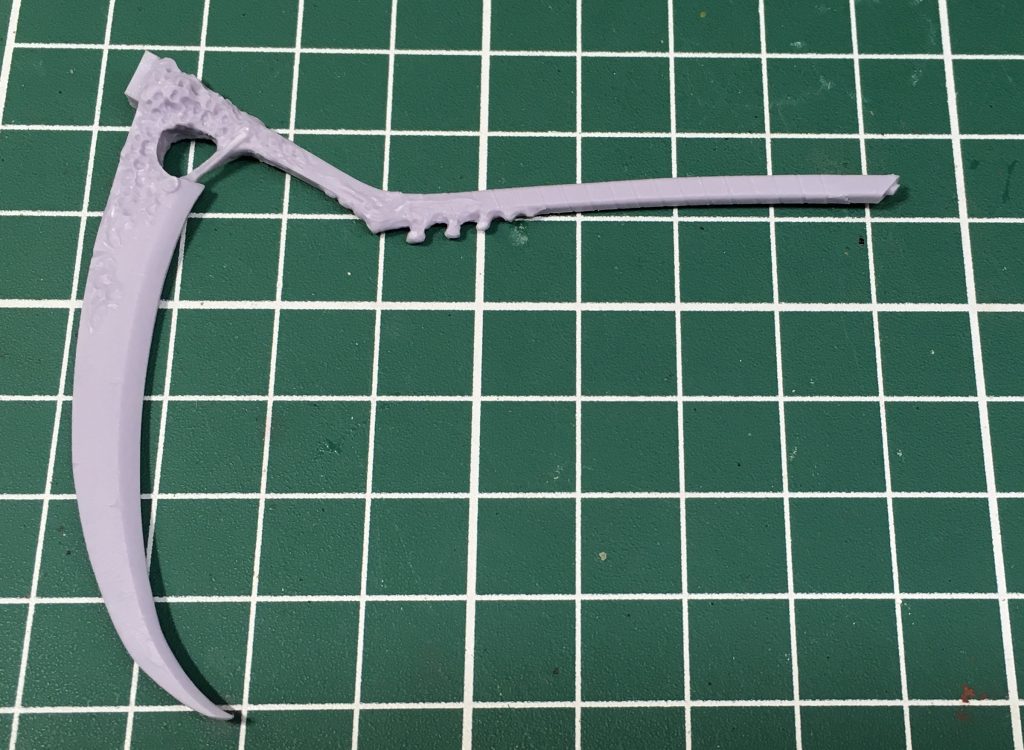 Note the skulls symbolising the souls that had been reaped

The figure is one minute powerful, brutal and malevolent, in the same moment it is dynamic, ethereal and beautiful. The design is particularly clever, creating a semi transparent, other worldly persona, the composition is balance, the pose dynamic and the silhouette is haunting.

I believe The Harbinger of Death is particularly original in concept, design and sculpt, in fact rarely do we see a concept that is this original, see reality, where often not the sculptor, due to limitations was unable to capture the same feeling in clay. (Enjoy the following gallery!).

Galapagos Miniatures are renown for producing ground breaking and innovative miniatures, The Harbinger of Death is surely another such project. The quality of the presentation, concept, sculpt and Cast is of the very highest and will surely appeal to both the serious figure painter and the collector. The only issue is coming up with an original paint scheme to do the figure justice especially considering the stunning boxart!!

Make no doubt about it, this is a high end product and as such the price point reflects that at a tasty £67 however, having held this in my hands and studied it for this very review, I can vouch that it is worth every penny!