Grunt is a new release from Nuts Planet’s range of it Busts and it is a beauty, these smaller busts are in many ways a great introduction to this genre yet do not expect there to be any less detail! This is  a seven part, polyurethane resin kit in 1/10 scale, sculpted by Jun-Sik Ahn and comes complete with a colour scheme card and a small selection of transfers for detailing to the helmet and the personal affectations of the soldier, tucked into the helmets elastic. 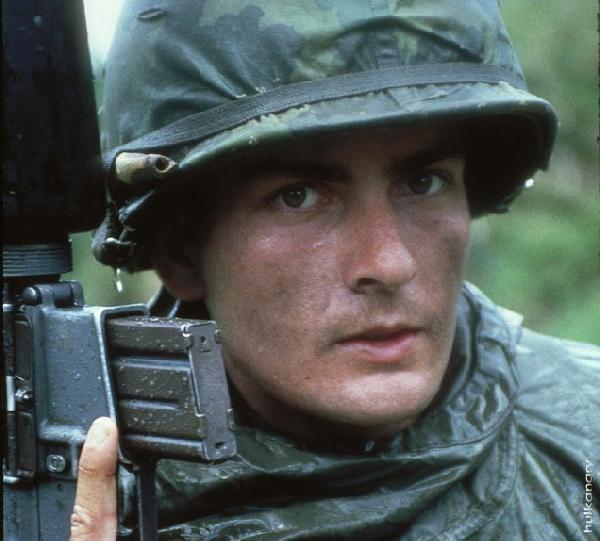 Platoon – inspiration for the release

The kit arrived, contained in a metal tin adorned with the boxart by Myeong-Ha Hwang, the smaller parts secured in ziplock bags and everything nestled safely between shaped layers of foam. The bust depicts a young soldier of the US Army during the Vietnam War and there is a striking similarity to a young Charlie Sheen (Private Chris Taylor) from the blockbuster movie Platoon! First impressions on opening the tin are very good!

As there is so much written about this War I will just touch on a couple of points and a brief introduction. The Vietnam War (Chiến tranh Việt Nam), also known as the Second Indochina War was also known within Vietnam as the Resistance War Against America and encapsulated the countries of  Vietnam, Laos, and Cambodia beginning on 1st November 1955 and continued until the fall of Saigon, some two decades later on 30th April 1975. It was the second of the Indochina Wars and as simply put as possible was fought between North Vietnam (supported by communist allies such as Russia and China) and the government of South Vietnam (backed by US< South Korea, Australia and others with anti-communist beliefs).

By the end the US had invested (direct costs only) $135bn or over $1.1 trillion in todays market and resulting in a large federal budget deficit! Casualty figures for the War are somewhat blurred, many of the American claims of enemy kills are inflated, in most part because many thousands of these have since been shown to be civilian casualties. However, conservative figures show that 58,000 Marines died, some 1500 still unaccounted for with over 250,000 South Vietnamese deaths, along with approximately 250,000 Cambodian and another 55,000 Laotian fatalities! In addition a report confirmed an estimated 65,000 North Vietnamese civilian died and total numbers of violent deaths during the war have reached the millions. At one stage US Dept of Defence recorded communist forces lost some 950,000 soldiers yet for many civilians around the World this was a War that was badly planned, badly managed and was an inevitable defeat for all those involved. American civilians rioted and protested in the wake of such high civilian casualties, Operation Rolling Thunder, the process of carpet bombing N Vietnam alone was accountable for upwards of 180,000 civilian lives. The U.S. dropped over 7 million tons of bombs on Indochina during the war!

Somebody once wrote: ‘Hell is the impossibility of reason.’ That’s what this place feels like. Hell.

U.S. Secretary of State Henry Kissinger wrote in a secret memo to President Gerald Ford that “in terms of military tactics, we cannot help draw the conclusion that our armed forces are not suited to this kind of war. Even the Special Forces who had been designed for it could not prevail.”

young marines of the US Army

Assuming KIA lists accurately represented age groups serving in Vietnam, the average age of an infantryman serving in Vietnam to be 19 years old is a myth, it is actually 22. None of the enlisted grades have an average age of less than 20. I can only imagine the horror they faced in the hot, dense jungles. The War was such a failure many soldiers turned on their officers. With soldiers reluctant to risk their lives in what was perceived as a lost war, fragging (killing of superior officers more than likely using grenades, fragmentatation) was seen by some enlisted men “as the most effective way to discourage their superiors from showing enthusiasm for combat.”

By 1971, a U.S. Army colonel declared in the Armed Forces Journal that “The morale, discipline, and battle worthiness of the U.S. Armed Forces are, with a few salient exceptions, lower and worse than at any time in this century and possibly in the history of the United States”. 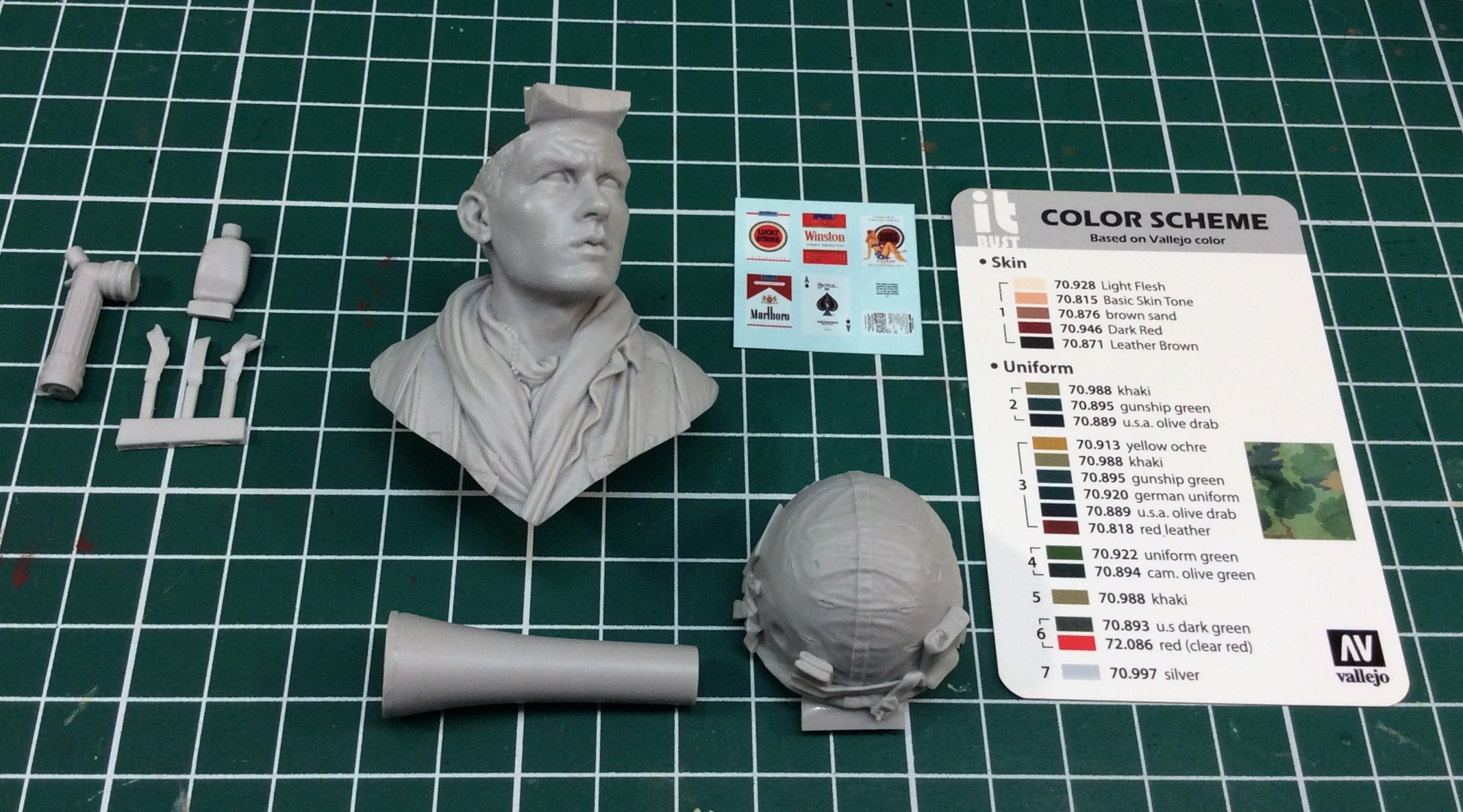 This is a traditional bust comprising head and shoulders, the shoulders are cut at an angle and directed downwards so the bust finishes in a point just below the chest. The main piece consists of torso and head with the head cut at an angle to receive the helmet via a square peg and hole assembly. The face is nicely sculpted with furrowed brow and an anxious expression, nice detailing to the features and the hair depicting the crew cut, clean shaven and neck muscles on show at the front. Around the neck, peering from beneath his shirt we can see a section of the dog tag chain, a nice touch. Wrapped around and sat upon the combat smock we have a “scarf” and over the shoulders and down past the chest we can see the straps to the webbing with nice seam detailing. Folds and creases throughout are realistic and naturally occurring whilst the relevant elements display sharp undercuts and crisp detailing throughout. 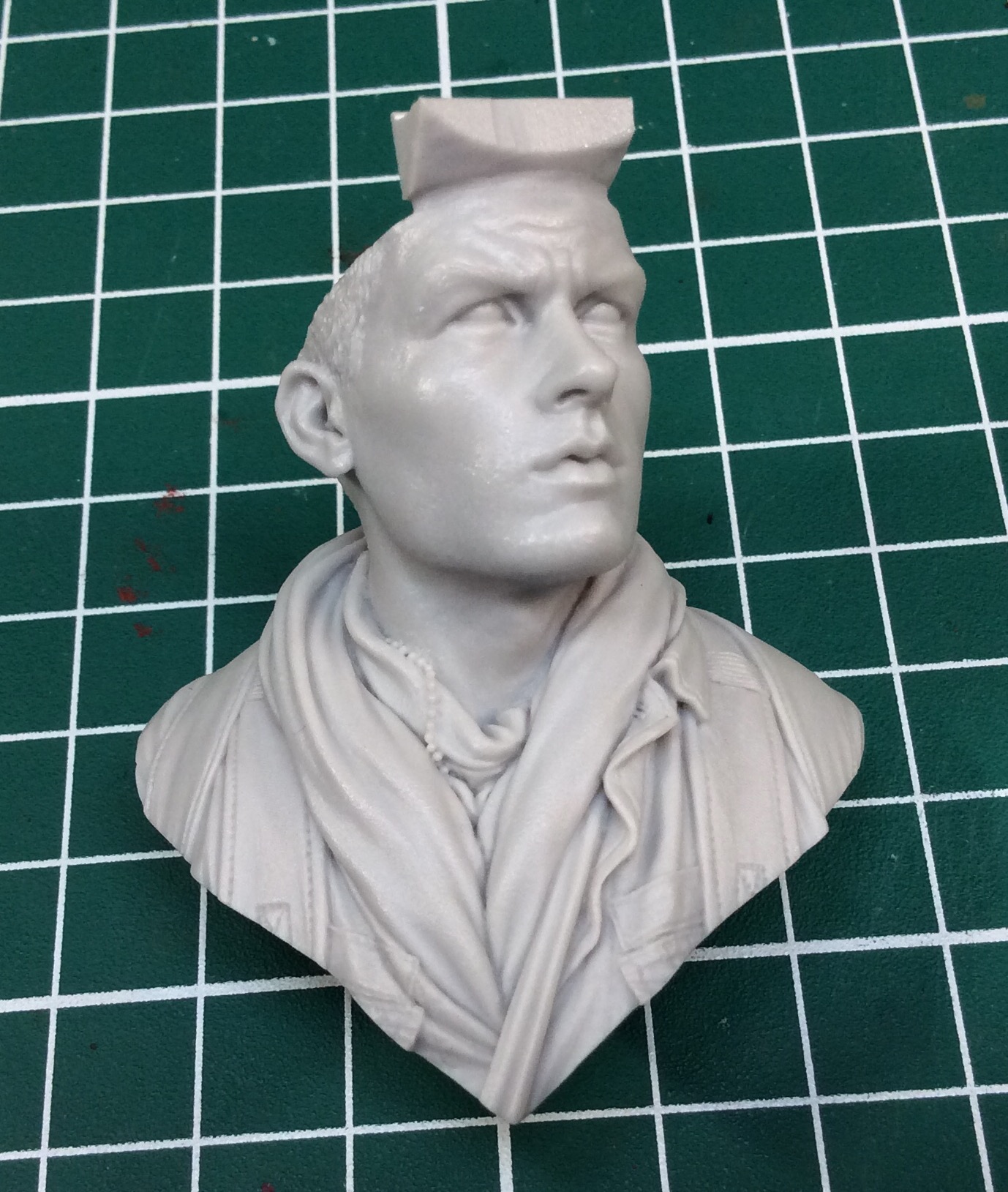 The helmet is a very nice piece of sculpting complete with camouflage covering for the jungle environment. This covering was elasticated and you can see the folds and creases due to this “stretching”. The seams are in the right places and detailing such as the wear and tear, thick stitching to the elastic, the buckles to the strapping and the crucifix and chain wrapped around the banding are all nicely done. Sculpted to the helm we have the obligatory cigarette packet, playing card, what appears to be a small can of bug oil, the various essentials.

We have five smaller pieces, consisting of three short lengths of strap (look out for the round tucked beneath one), the ribbed, right angle torch with red filter and a small, squeezed bottle of rifle oil, which attaches via a hole in the rear of the helmet. Painting the camo pattern and maybe some slogans on the cover can be a really good way to push your skills.

The casting is flawless, there are no mold lines, air bubble holes or slippage and other than having to cut and file smooth the casting plugs, preparation is minimal. Highly recommended!

It almost seems unfair to judge such a piece under this criteria however, the cut of the bust and the subject matter still make this piece reasonably original and it is the smaller nuances that help to make this bust so. For instance this is a bust aimed as a transitional from full scale painting to more complex and larger bust projects. The addition of the colour scheme card and the decals are also another intuitive touches.

I say this every time and I continue to stand by this, Nuts Planet are simply one of the very best figure companies out there, with a strong customer base and some of the very best Artists collaborations. This kit will appeal to those with historical or military interests and those wanting to try their hand at a bust.

Just like the previous two busts in this range, the price is $50 which when considering the quality of sculpt, cast and presentation is a particularly competitive price, if only the £ sterling wasn’t in such a mess!