The Great Unclean One is one of those iconic monsters from the worlds of Games Workshop, that has been around, since time immemorial. There have been several metal versions over the years, the last of which is about 20 years old I think. So it has been with great anticipation in the gaming and collecting community, that they have released a brand new up-to-date plastic kit of the Great Unclean One. 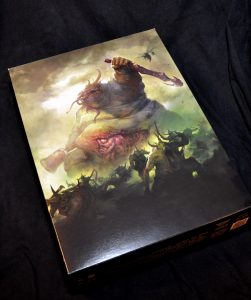 The Great Unclean One is the greater daemon of Nurgle. Nurgle is one of the four Chaos Powers. Nurgle is the lord of decay, sickness, blight and plagues. Nurgle is a Jovial character, who nurses the diseases and daemons he creates and really cares for the spreading of disease and life in the forms of Vira, moulds, fungus and rot. The Great Unclean Ones are his biggest Daemons, the generals of his armies and daemonic hordes. The Great Unclean One is created in Nurgle’s own image, So he is a large, fat, bloated monster, covered in sores and pustules. His innards spill from the sores. Nurglings (tiny daemons of the same kind) hatch in his sores and innards and crawl all over his body, nestling under the rolls of fat and skin. The Great Unclean One is just as likely to pet his nurglings and care for them as he is to grab them and eat them, whenever he feels like a little snack. He is also a funny jovial character, caring for his minions and the spreading of Nurgle’s bounty. There is a really insane duality to these daemons in them being utterly evil, only put into the world to spread disease, death and entropy, yet at the same time they are fun, grandfatherly laughing caring creatures. 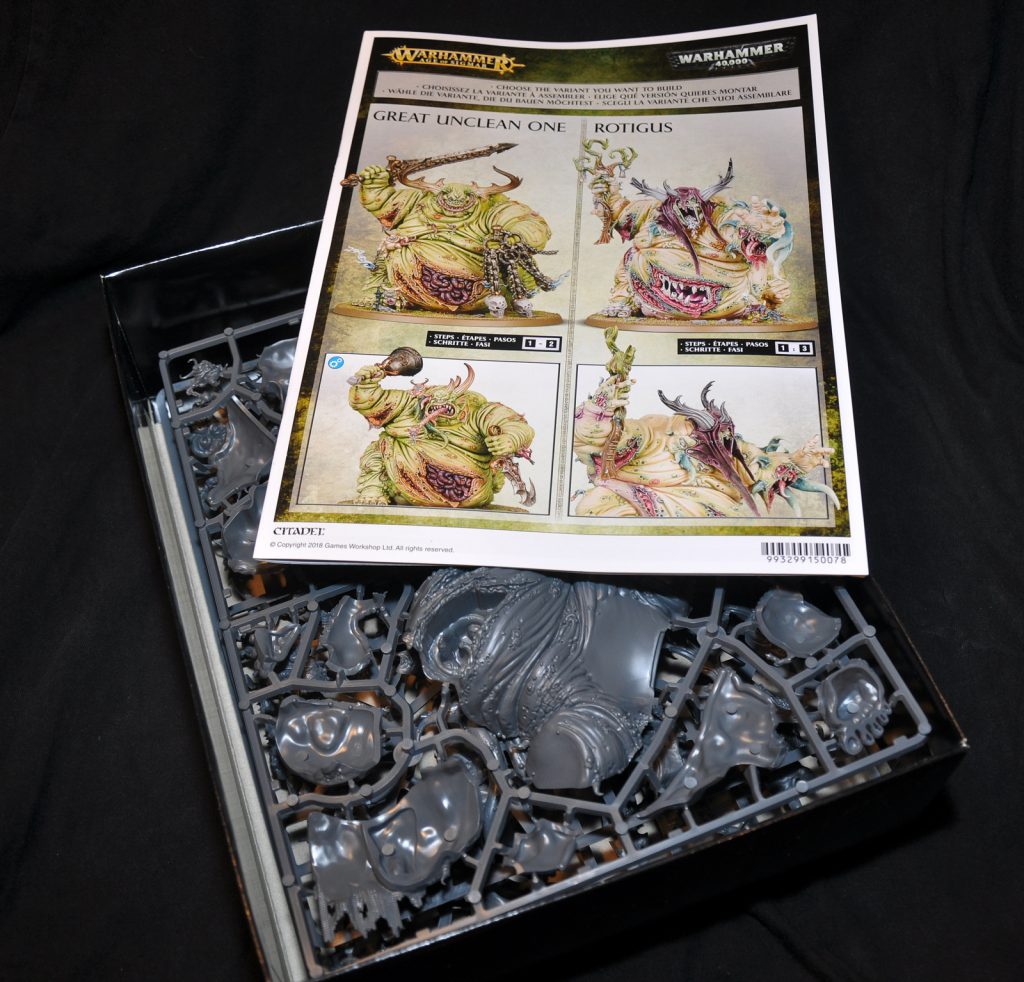 What the box reveals

The packaging is the kind we have become used to on the larger Games Workshop kits; an outer sleeve with their box art paint job of the figure on the front and alternate versions on the back as well as close-up detail shots. Inside is the box itself, with a big painting wrapping all around it rather tastefully done without any text on it. I rather like these aesthetics, as you get the commercial stuff on the outside, which is unavoidable and a corresponding piece of artwork inside free of any interruptions. Opening this box reveals the sprues of medium grey polystyrene plastic and a full colour booklet with assembly instructions and the game rules you need to use the figure in games of Warhammer: Age of Sigmar and Warhammer 40000, in English, French, Spanish, German and Italian. The assembly instructions are very easy to follow, showing computer generated 3D images of the parts and how they are to be fitted together. Colour highlights of the various parts show how they are fitted on the model. This makes for a very easy instruction to follow, which is good as it is a big complex kit and children down to the age of 12 should be able to build it.

With several alternate parts, you get to make 3 different versions of the model: two kinds of Great Unclean One with different head and weapon options and one Rotigus the Rainfather, a named character, which looks a little more like a wizard or priest with a hood and a gnarled staff, he has a big mouth in his belly as well. Bear in mind that all Great Unclean Ones are wizards though, it is part of their job.

With two different bellies, three heads, three different left and right arms, you get a lot of interchangeability, they can be assembled in many different combinations.

The kit is digitally designed. Everything very precise and neat. Nice and precisely injection molded in polystyrene, no sink holes, no loss of detail, every ejection pin mark is placed on the inside of the parts. The technology of injection molding has come far since those Airfix and Matchbox kits I built when I was a kid in the eighties.

The model is very detailed, full of little and not so little sores, pimples and blemishes. There are rolls of fat and flaps of skin. The weapons are pitted and dented, these are all the trappings of a daemon of Nurgle! But I think detail is a little soft, a little round at the edges, which is typical of digitally designed models. I am impressed with the metal parts, like the sword and bell, the amount of texture and sharpness here comes really close to what we know from hand sculpted miniatures. With the right paint job these can be made to look very good.

This is an impressively big model, standing at just about 105mm to the top of the head! That is one serious monster for 30mm scale. For some time, I have had my eyes on the big Great Unclean One model from Forgeworld, for a special project, but this one is definitely big enough for the task. I can imagine that this model will replace the one from Forgeworld in time. It is almost as big. 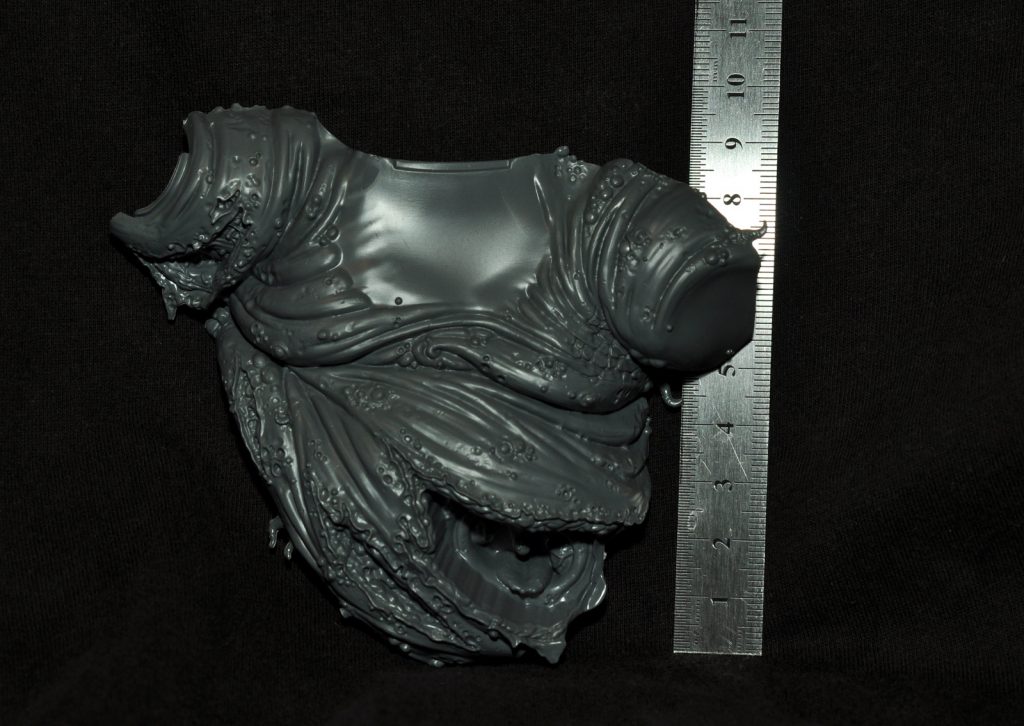 Dryfitting some of the main parts of the model revealed no fit issues. Many of the assembly lines are intelligently placed inside folds and wherever they can be hidden, so little clean up or sanding is needed on must of the assemblies. Be aware though that some prominent areas like shoulders, arms and legs are next to impossible to make like this. The GW designers go to great lengths to hide such joins, even making zig-zag joins between pimples and other details, but there is no escaping a little sanding or filling atop the shoulders and arms if you want assembly to be invisible. 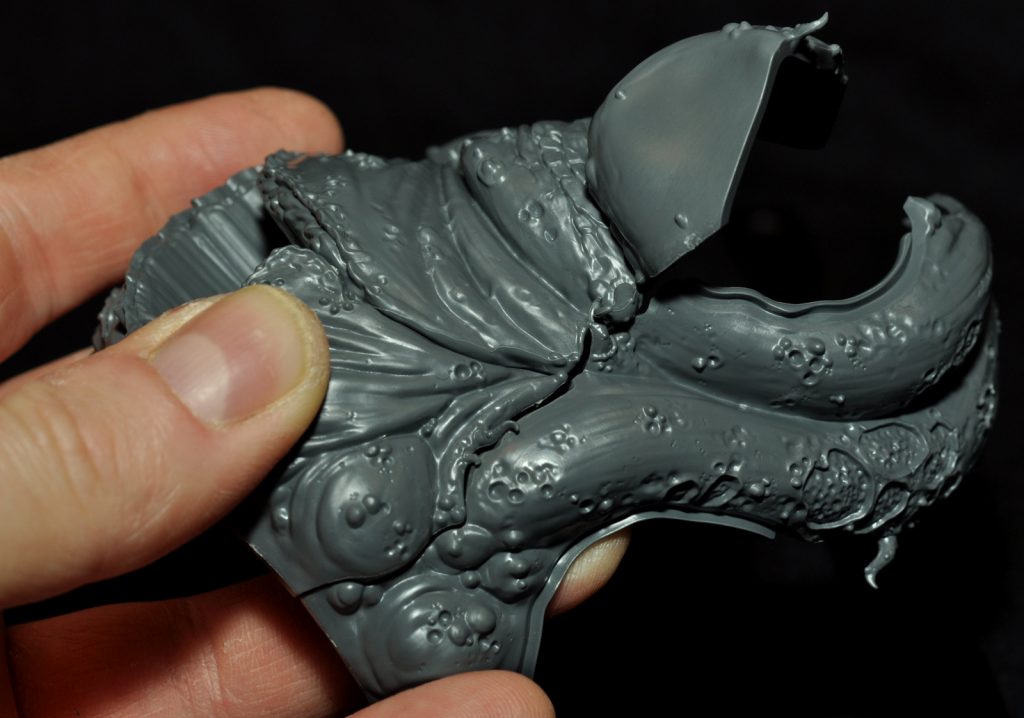 I think miniatures designer Steve Buddle did a wonderful job of capturing the essence of the Great Unclean One. It is a character everybody who plays Games Workshop games know and all have a certain opinion of what one should look like. It is very set in people’s imaginations, yet there is some evolution to it as well, mainly different materials and production technology makes development of the design possible. There is no doubt in my mind that the rather small old metal versions were actually as big as they could feasibly make them. The intention of the monster was always a very big one. Injection molded plastic and 3D design finally makes it possible to make the proper interpretation of this daemon.

The idea of the Chaos powers and their daemons has always been an original one in my opinion. This model captures the way they always have been. They were first published with background stories in Realm of Chaos: The Lost and the Damned back in 1990. That book has a very iconic and well-known cover, that sort of epitomizes the look of Nurgle and his hordes. The cover really informed what all those decayed hordes and their masters looked like. I think Steve Buddle has captured that feeling perfectly. In that regard, I am thrilled to finally have a modern figure, that captures the grandness of that book and its fantastic cover art.

After the release of the Bloodthirster a few years ago and the big Lord of Change last year, it is natural that this Great Unclean One is the next in line. One can say that these greater daemons have been missing for quite some time, as Games Workshop are really pushing forward with great plastic kits and the earlier metal versions of these are very old.

This model will of course appeal to any Warhammer 40000 or Warhammer: Age of Sigmar players who play with daemons or the chaos powers themselves. It is a perfect centerpiece for any sizeable miniatures army. Or for that matter people who still play traditional Warhammer Fantasy Battle.

It has another quality as well: Nostalgic value. It really hearkens back to those good old days of the Realm of Chaos books. I think that is the greatest strength of this model. I started to play warhammer back in the early nineties and the artwork and mood of these particular books was very much what attracted me to this hobby back then. I have moved on since then, doing much more showcase painting and playing much less and when I do, smaller games. Yet when I see this model I see a great potential to relive those old days and make a model where I interpret the very thing, that drew me to this hobby years ago. With that in mind, I think this model has great potential for Golden Demon painting competitions and maybe a few others, but mostly for Golden Demon and I am sure we will see some at the coming GD’s later this year.

At 85£ I must say that this is an expensive toy, but this is the standard price of a Games Workshop kit of this size. And it is a big kit, you get a lot of model and a lot of hobby entertainment for your money. I think these big kits are pushing it a bit on the price, but it has always been that way. It is the price point alone that has drageed this items review score down. 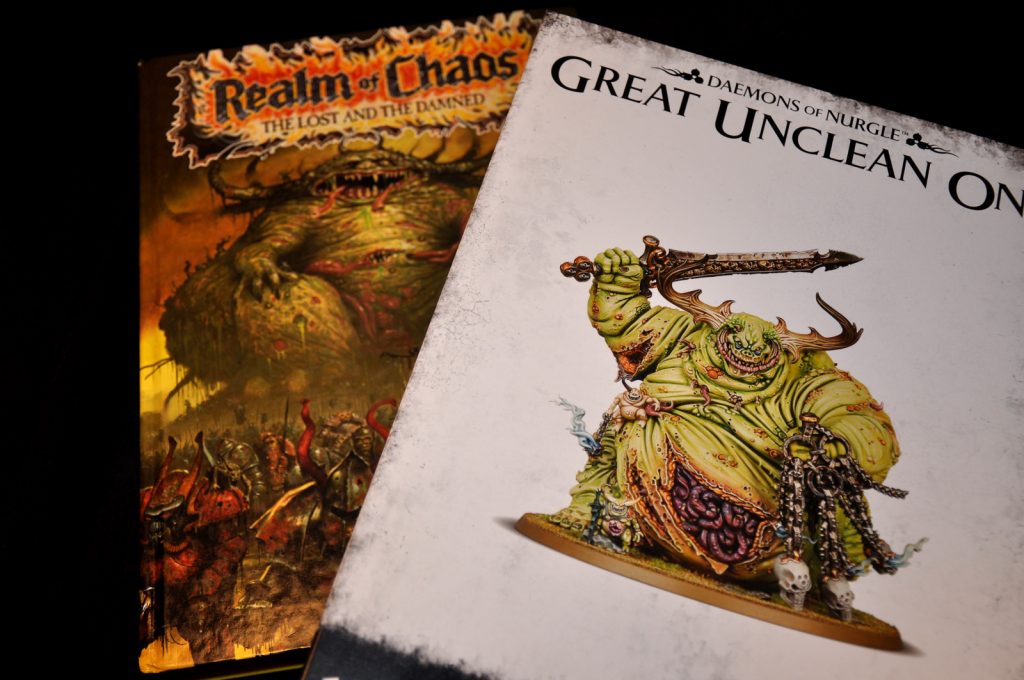 Let’s get that Lost and the Damned vibe going

Dates and figures and stuff