There were twenty five of these incredible kits made and I have no9. It comprises of almost 90, highly detailed, polyurethane resin parts and comes with detailed A4 instruction booklet! It arrived in a solid, large white box adorned with the concept Art of this updated release, the FDV1 Mako V II. On opening the box I was stunned, as you can see I struggled to get all of the parts to fit on my cutting mat! All of the parts are secured in three large ziplock bags, wrapped up in layers of bubble wrap and we also get a couple filbot stickers and a business card too! The kit is sculpted in 1/35 scale and will surely provide hours and hours of modelling and painting fun, despite the high price point (well until you consider the prices for a particularly well known company) this is one helluva kit!

“In a time when mega corporations rule the world, and money not government determines the rules of survival, the battlefield has changed. In destroyed and abandoned cities across the globe M.A.W’s scan the debris, their pilots searching for other walkers in a game of hide and seek. Bipedal armoured behemoths hunting rival battlegroups, intent on taking the mechs for prizes or stripping the flaming hulks of downed opposition for parts.

These Manned Armoured Walkers were originally a joint global venture called Future Development Vehicles designed to provide man with an armoured shell and exoskeleton enabling feats of strength and unparalleled safety in a world of rapidly advancing technology. Shortly after being unveiled to the world two Mega Corporations simultaneously set in motion a plan to eradicate the projects main engineers and specialists. The aim was simple. Keep the technology for themselves with a view to taking over the rest of the globe by force, developing the FDV’s for the battlefield. 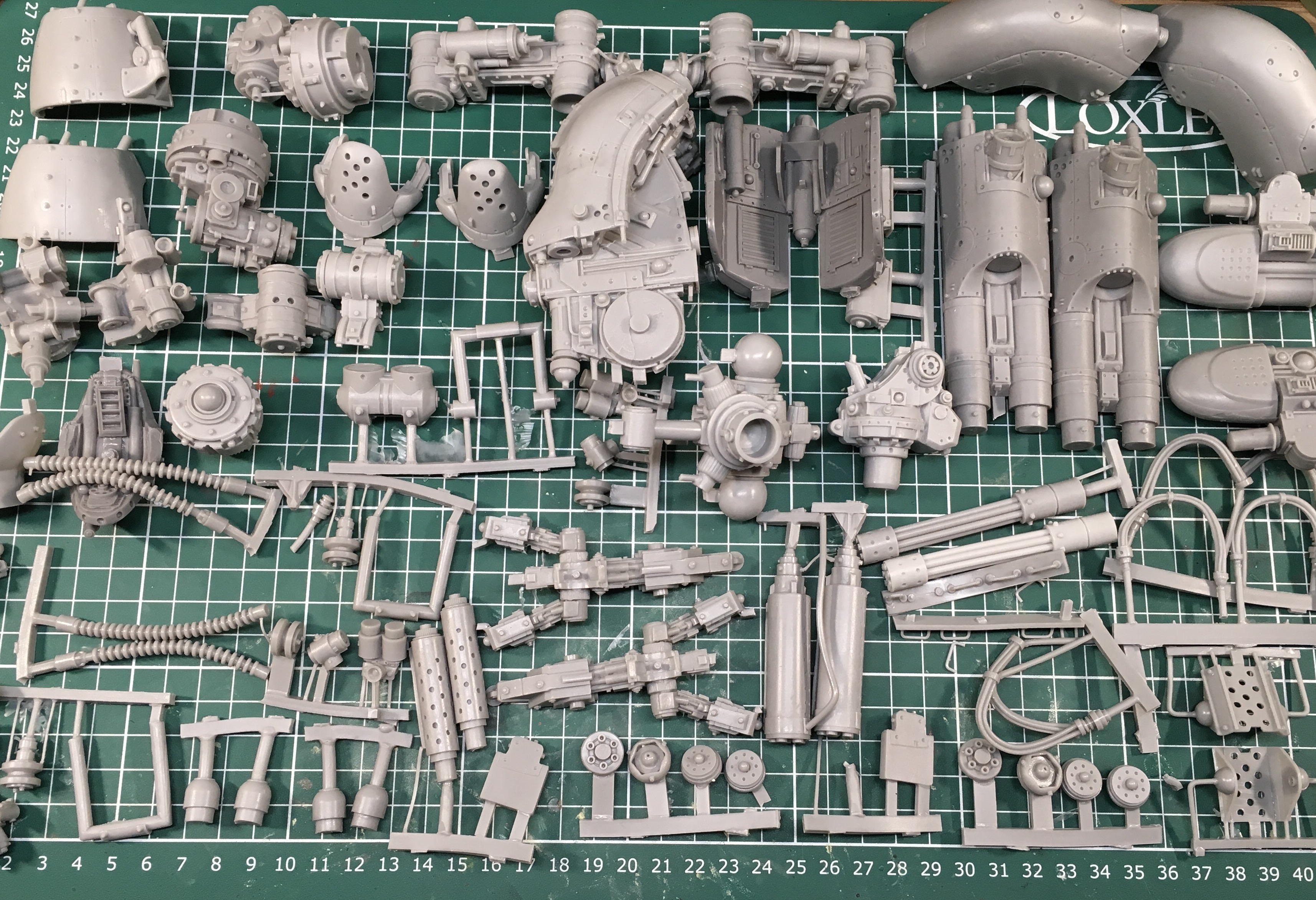 The following years saw bitter struggles of power and global war ravage the might of the military until only a handful of corporations survived. With almost all the worlds military forces destroyed fighting each other, the battlefields now belong to versatile walkers. Stronger, faster, more heavily armoured and armed, the FDV’s were rare, but almost unstoppable. Now facing each other on the battlefield the FDV pilots began forming small battlegroups and simply never returned to base. They simply figured they had better odds on their own rather than being pushed into conflict by Fat Cats from the safety of their Ivory Towers.

FDV units are now the most common sight on the field of battle. Although their load outs can vary, they all follow the same basic design and are instantly recognisable. With a low centre of gravity and multiple hard points the FDV units are as individual as the pilots. Some are equipped with long-range state of the art Rail technology, while others prefer short ranged burst and melee weapons. Whatever the loadout, all are dangerous in the hands of a skilled pilot”. 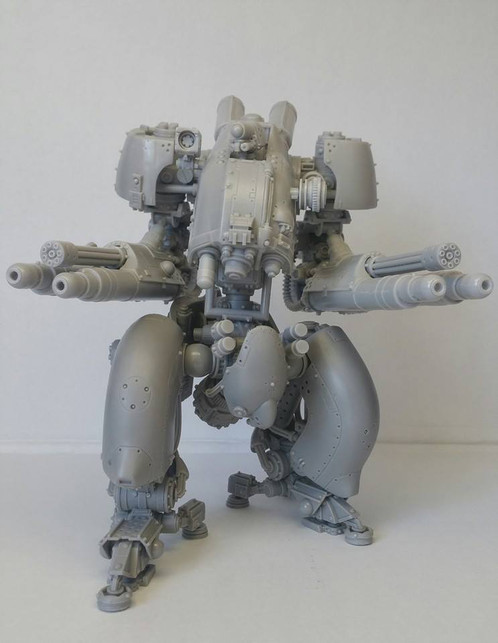 Firstly let me mention the quality of the casting of the FDV1 Mako V II, too often I have spent hours and hours cleaning off mold lines on resin vehicle and mecha kits although to be honest that was for commission work. The process is tedious and time consuming but skimping on the preparation severely affects the end result. Thankfully there is no such issue with the products from Filbotmecha.com , the casting is super crisp and clean, minimal preparation that includes having to remove and file smooth the resin tabs on the individual parts. There is no flash and certainly no major defects such as air bubble holes or slippages.

The FDV is a bipedal, squat, intimidating mecha, piloted and armed to the teeth, regardless of loadout (see the other FDV’s at the store) it has an aggressive and powerful composition. There are some classic Mecha concepts that have provided various bouts of inspiration but Fil Dunn has definitely created a unique design. Each part is full of detail, whether its’ rivet, hose, cabling, handrails, armour or the detailing to the cockpit and weaponry. Not only that but the design of the sculpt is incredibly believable and has a near future feel to it which makes the piece chillingly prophetic. Below you can see a gallery of some of the larger sub assembly parts.

When I first opened the box I was super excited but also somewhat anxious however, I am pleased to say that the instructions are super. Consisting of seven pages and broken down into a series of logical subassemblies; Torso, Hip, Arms, Legs, Armour and Head, they provide easy to follow and succinct step by step prompts along with useful insights such as when to attach certain parts at the end, which parts need drilling or pinned and so on. In fact the kit is built in such a way that near the end of assembly, everything will be built except for the addition of the armour plates and again it is recommended that you paint everything else prior to adding the armour, not only because it would make access so much easier but you can really go to town on each sub assembly with the paint finish, weathering and special effects.

All of the fine detailing is perfectly captured in the cast, holes, welds, rivets, pistons, panels are all well represented. The panel lines are also clear and deep enough so no extra work there either. Dry assembly of a lot of these parts shows tight fits with no need for gap filling and in addition, there was no confusion over which way the various elements went together, which is great (I do not even do flat pack furniture in my house, that’s Kerri’s job, so you can imagine how relieved I was over this!). In addition, to these instructions you can also find in-depth construction videos on Filbot YouTube Channel, how cool is that?

What a wonderful design, sleek curves almost Alienesque in their sweeping lines, with a believable form and in addition, if I had the imagination, I could easily conceive of this as being a military design. I love the silhouette created by the form, low centre of gravity, broad shoulders and intimidating firepower. I also really like the “reverse jointed” legs and the feet sections which give it an almost insect appearance.

There are so many elements to the design that could easily be influenced by some of my favourite topics and so that gives the piece an extra factor of wow! I believe it is truly a unique and original design and Fil Dunn should be congratulated on this.

just look at that gorgeous detail

This FDV1 Mako V II kit or indeed any of the other mechas and robots from Filbot will appeal to the Mecha brigade or anyone with an interest in robots and science fiction. The kit truly provides the hobbyist with an inexhaustible array of build, paint and weathering options, from Military Camo, to White Wash, rusted out hulk, derelict or Alien in design. The opportunity to incorporate oil washes, streaks, rust, chipping, decals and so many other techniques that are currently being perfected, is one not to be missed. Now if only I could find some more time to build and paint all the ideas and projects I have!!

This is a serious kit with a serious price. It is large, with many pieces, the construction will be a project in itself and I can see this taking a good six months to do it justice, if you are considering to paint it to competition standard. With that in mind this kit is going to cost you around £25 a month for all of that fun, when you put it like that, it seems particularly affordable, as a footie fan I can easily spend that each weekend! The design, quality of the sculpt and cast, the instructions and presentation make the price worthwhile, if youre serious about your Mecha! What are you waiting for?