We have had great expectations of Aradia’s The Divine Comedy kickstarter. The idea itself of presenting the Divine Comedy in miniature has had me pretty excited to say the least. I went for one of the smaller pledges; Guardians od Hell though, so I got my order home pretty fast, compared to having to wait for one of the big ones, that needed to be made from scratch after pledging. This is an unusual review because the figure is currently unavailable, being part of a kickstarter and all the pledges has to be met before it (hopefully) becomes available for normal retail. Just like Gorgon which I also have reviewed here. 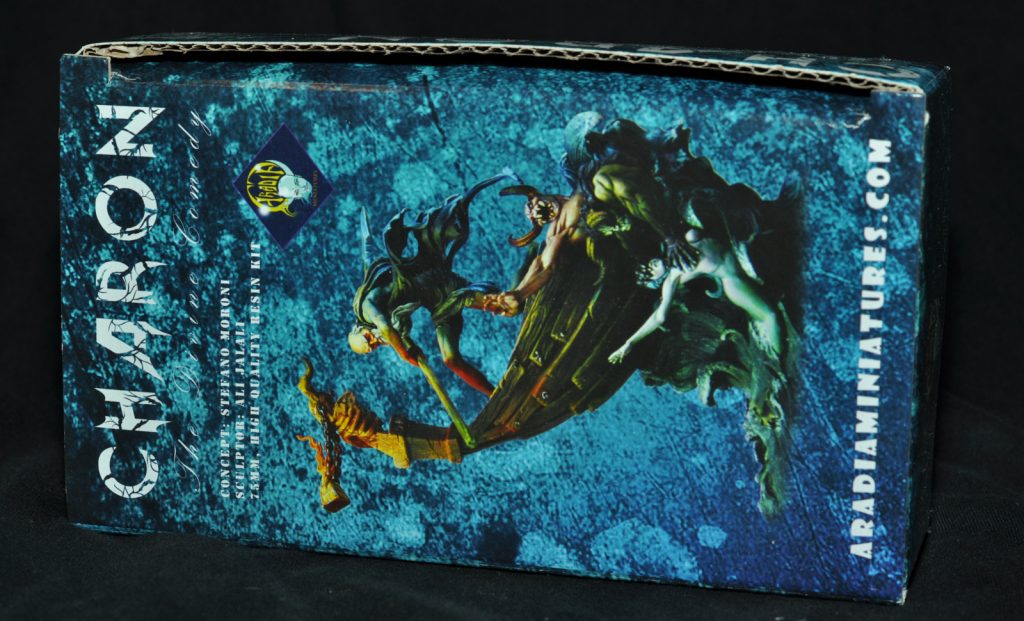 A nice box of goodies

What I have here is Charon the boatman, who ferries the dead across. Charon is another of the characters from the Divine Comedy that comes from ancient Greek mythology. Charon would ferry the spirits of the dead across the river Acheron to the land of the dead Hades. Only if the dead was properly buried and had a coin placed in their mouth for payment for Charon. Charon is a late addition to the Greek mythology, he is not featured in any of the early legends and poems. Later on we have come to associate Charon with ferrying across the river Styx. We also have an association with sailors who in older days would wear an earring, so they always had payment for Charon at hand. Charon would also protect the spirit he ferried across from lost souls and demons found in the water.

Charon can be seen as a metaphor for death, the transition from earthly life to the afterlife/realm of the dead.

This 75mm model depicts Charon standing in the prow of his boat, cresting a wave. We only get the front of the boat, but that is sufficient. In the wave we see demons tormenting lost souls and reaching for Charon and his boat. Charon is crouched over, wielding his big oar as a club to fend of the demons.

The model is sculpted by Ali Jalali after a concept by Stefano Moroni. 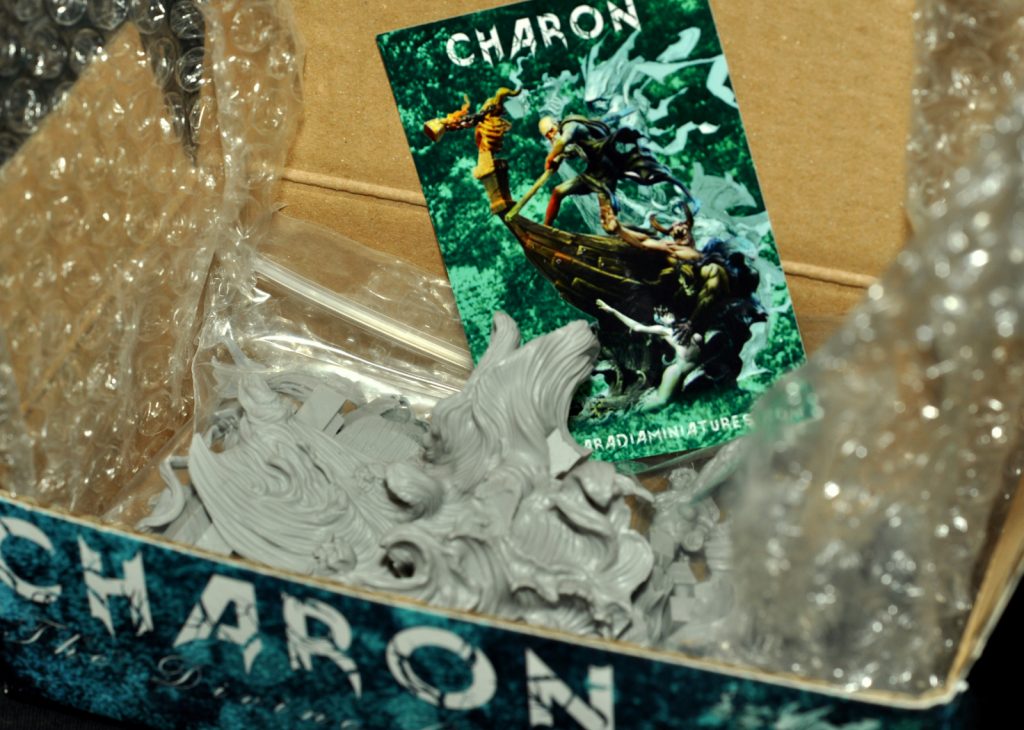 What the box contains

Charon comes, like Gorgon in a sturdy cardboard box, this time it is blue and with a picture of the box art paint job upon it.  On the side is a quote from the Divine Comedy:

“Behold then, coming toward us in a boat, an aged man, all white with ancient hair, who shouted: “Woe to you, ye souls depraved! Give up all hope of ever seeing heaven! I come to take you to the other shore, into eternal darkness, heat and cold. And thou that yonder art, a living soul, withdraw thee from those fellows that are dead.”  Inferno, canto III vv. 82-89

Inside we find an art card with a picture of the painted model and the concept sketch and the above quote repeated on the back. The many small parts are in two plastic bags, the large parts for the boat and waves are nicely tugged into the bubble wrap that protects it all.  This is a big kit of 23 medium grey resin parts. 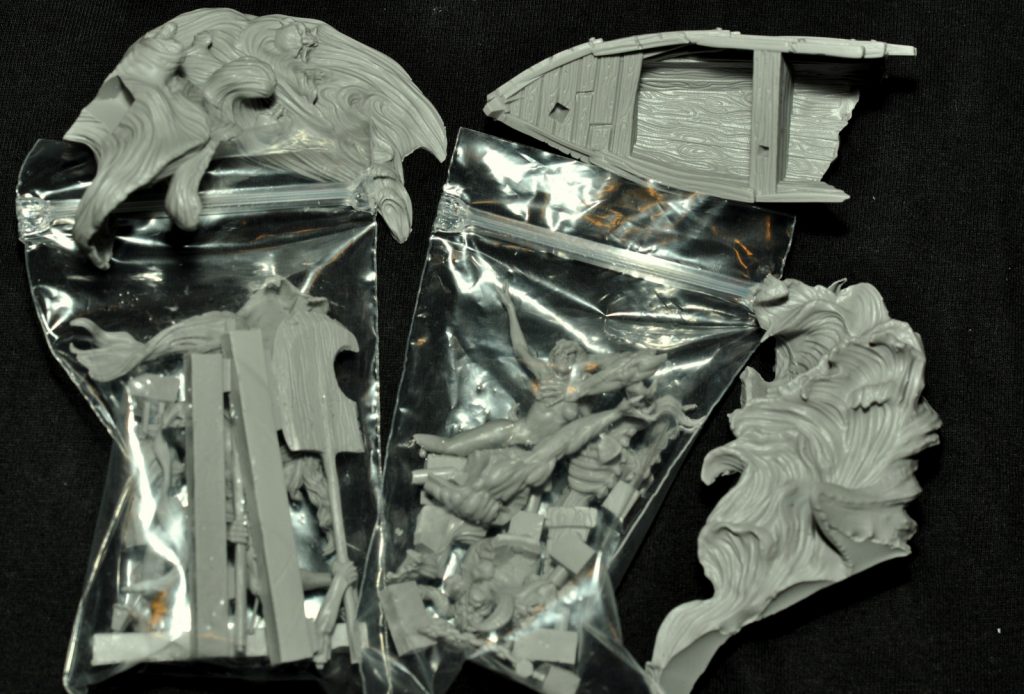 We have a very smooth sculpt here, much as we have come to know and expect from Aradia. It is beautifully executed for the most part. The sculpt can be a little round at the edges, this may be a design decision, but it might be a little difficult to paint. On the other hand, this smoothness and slight roundness to everything gives it a feel like a marble statue, which corresponds very well with the theme and inspiration from classical art and literature. There is a strong wood grain on all the boat parts and the oar that Charon wields. It may be a little on the rough and two-dimensional side, but I think the right paint job will make it stand out nicely. I don’t think this is an easy model to paint, but it has a great potential. The wrinkled bits of cloth fluttering about, like his loincloth and cape are amazing. The texture and form of the wave is beautiful too and along with the figures put you in mind of classical marble statues.

Charon, standing in the prow of his boat measures only about 45mm in height, but he is crouched over and if we straighten him out, he will be just about 70mm tall, which is fine for the scale.

Cast is flawless. There is these big pouring blocks on many of the smaller parts. Smaller attachment points, these are easily removed. Little vents here and there. The material is slightly bendy, which is a good thing, since more brittle resins tend to break very easily, you have to be careful with the long oar, but the material really gives a bit more of a change than a more brittle one would have. There are no bubbles in my cast here. Detail is nice and sharply reproduced here. There is a minor amount of mould lines and flash, but there is no way around that unless you don’t fill the mould. The flash and mould lines are easily removed and smoothed out. Cut is good and follows the contours of the model for the most part. There are made fittings of blocks and square holes in many of the assemblies. On the back of the wave we have one cut that goes in the other direction from the contours, that will need some work to smooth out and hide. I think this is a necessary compromise, to make the casting work. 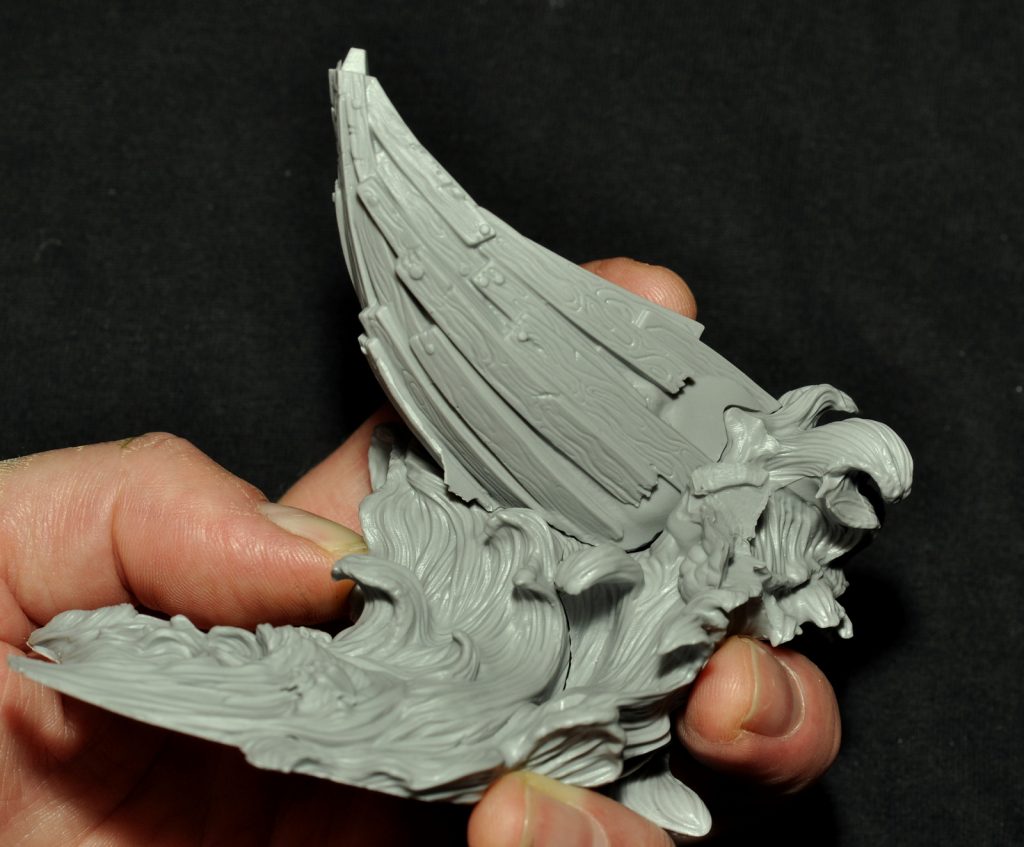 The fit of the parts is really good. I have dry fitted all the major parts and I, must say I am impressed. They come together perfectly, like small legos. With the blocks and square holes there is no doubts as to what angle the parts have in relation to each other. Even that troublesome cut on the back of the wave comes together with a precise little line and no fuss, I don’t think I will have any problems smoothing it out. I don’t think this kit needs filling anywhere. 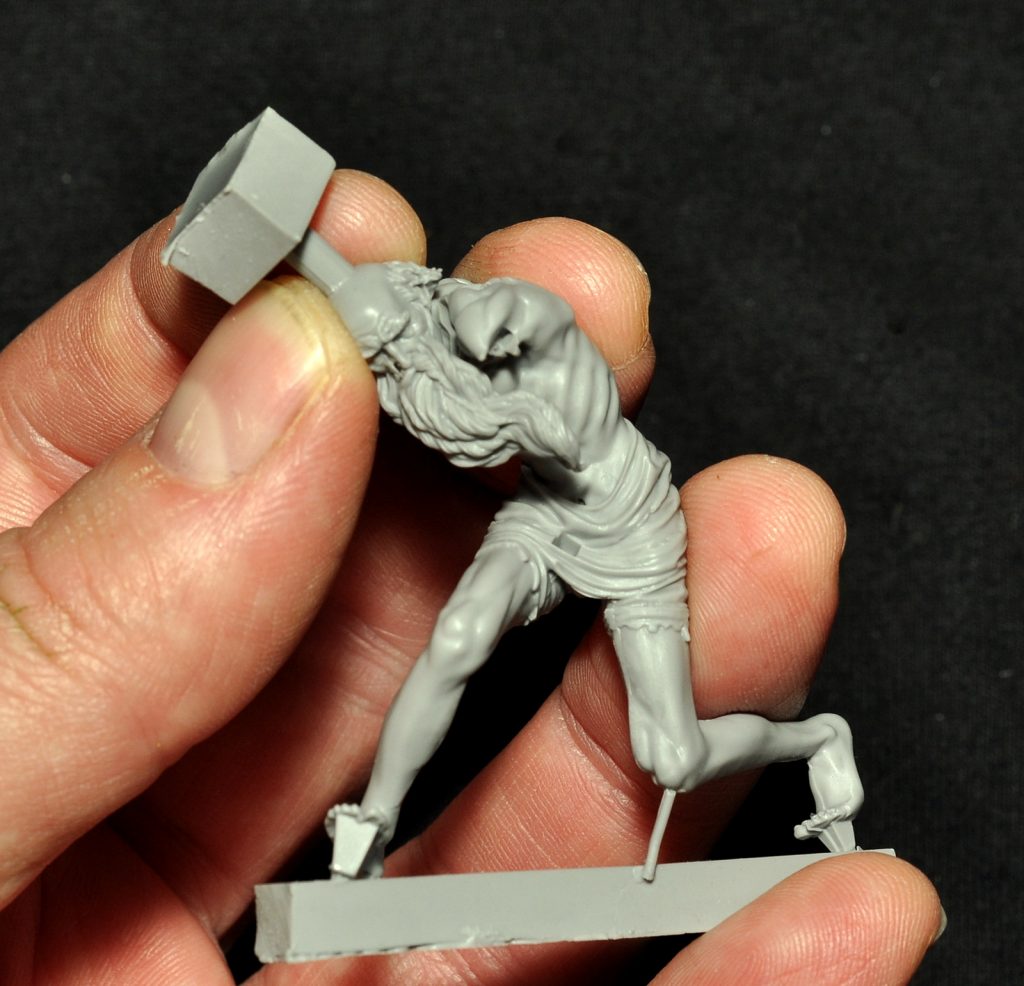 Bent old Charon, his head fits perfectly and looks a little like Leonardo

We see this old man standing in the prow of his boat fending of the demons. Sometimes Charon is depicted as a skeleton or even like a wraith, but in the Divine Comedy he is as here an old man. This corresponds nicely with the fact that he is not very tall, he is wizened and bent with age. His hair is ancient. This interpretation of Charon comes quite close to the description in the Divine Comedy, which of course is good. I find it very original and refreshing when miniature art depicts classical art as opposed to the pulp literature, computer games and cartoons we see a lot of. I really think Aradia has hit the spot here with their Divine Comedy range.

This whole thing comes together as a wave with lost souls and demons, the boat and Charon on top of it, it is a whole little diorama. It even has a nice well thought out pyramidal composition, which we also know from classical sculpture and great diorama art from the world of modelling.

The whole thing will come together in a very statuesque way and makes for a very elegant and strong model. I especially like Charon’s loincloth, it looks just like what you would find on a classical statue. Also the demons writhing in the water, their muscular bodies stretching and reaching for the boat are very reminiscent of classical sculpture. So the inspiration is really present in this piece and I think it is executed nicely and with respect for the art that comes before. It can be very difficult to depict characters we all know to some extend and all have our own preconceptions about as well as a lot of old art and literature describing them as well. I think it is very courageous of Aradia to tackle these characters from the Divine Comedy and by extension from Greek myth. I think they did well and I personally really like the concept. It is not something we have seen before in miniature, yet it comes very close to classical and fine arts, that is quite original at the moment. 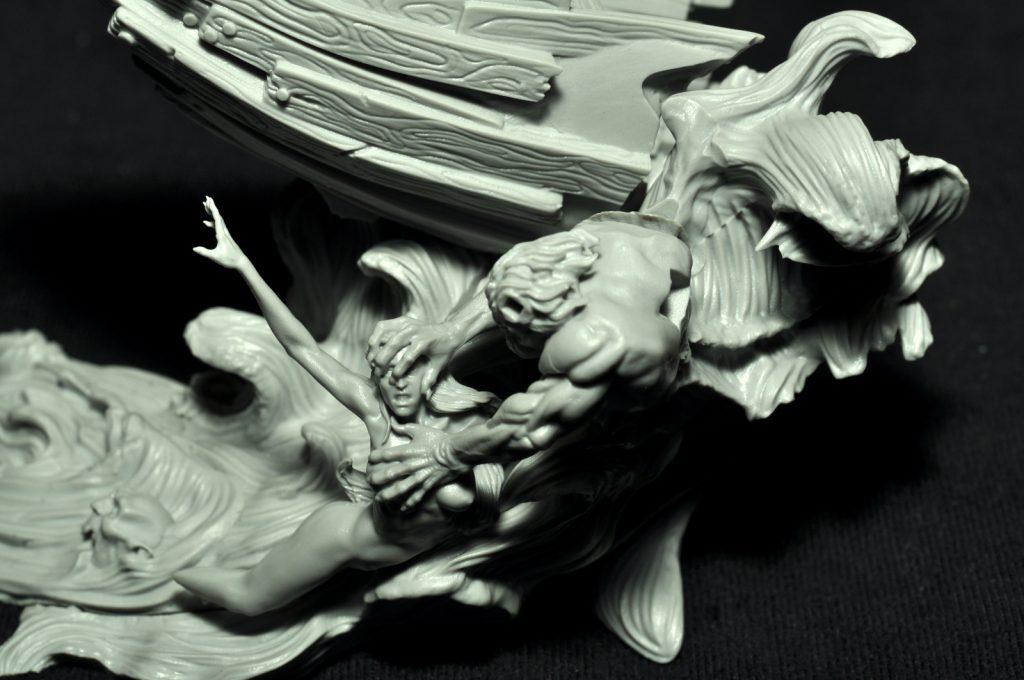 For anyone interested in ancient myth or classical art as well as literature, this can prove an interesting kit. Though there are many overlaps here, this is quite a broad field of inspiration. The kit looks to come together in a nice and statuesque way. It is both beautiful and grim. There is no denying the grim nature of death ferrying the spirits of the dead across the river Styx to the shores of Hell, having to fend of the grasping hands of demons in the waters. This subject matter is also very fascinating and thinking of how old the Divine Comedy is, not to mention how far back Greek myth goes, one can safely assume that these things have always fascinated man. If you are interested in these deep, fearsome philosophical matters or fine art or classical literature, this kit would be of interest. If you look to make a diorama that mimics the way classical statues are made, this kit will surely deliver as well. It is very beautiful and desirable. Bear in mind that this is a 23 part resin kit and even though the fit is very good this is a big undertaking making it all work. This is not a kit for the novice modeller,  but with a little experience in modelling and painting it will yield a beautiful vignette.

All in all I think this is a small bit of fine art. There is definitely some cultural beautiful quality to it in all its grim darkness. It is a chilling concept, yet one we as humans can not ignore, we are bound to die and get ferried across at some point, which along with a big bit of Christian redemption is the theme of the Divine Comedy. Whether or not you are Christian, Muslim, Hindu, atheist or whatever, there are a lot of big philosophical questions to deal with about what happens once we die. This kit and the whole Divine Comedy range can give the miniature artist an opportunity to tackle these questions as well. 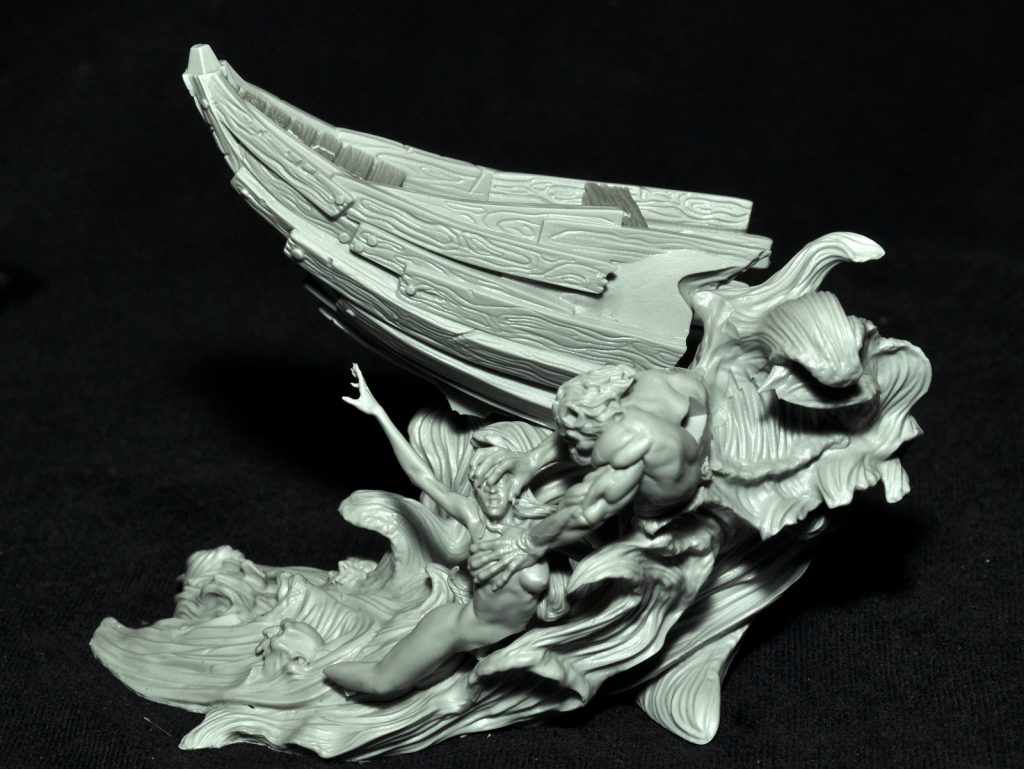 This has the makings of an impressive piece

I got mine as part of the “Guardians of Hell” pledge to the kickstarter. Here I pledged 95 CHF which is equivalent with 83,3 €. For that payment I got to choose two out of four kits of this size. I chose Charon and Gorgon, both 75mm scale vignettes, where you got a lot more than just one 75mm figure in each. So compared with other kits this is surprisingly cheap. It is normal to pay about 45 € for a single 75mm figure, here I got about twice that for a little over 40 € per kit. I’d say that is good value for my money.

I have no idea if or when these kits become available for normal retail, but all the pledges have to be delivered first. I hope they will become normally available someday, as I would like to get my hands on more of this kind.