The kit is 1/10 in scale and cast in polyurethane resin and consists of just three parts, making preparation and assembly quick and easy. This is a traditional bust from Tartar Miniatures consisting of just head and shoulders, a broad, brutal looking chopper blade and a short length of leather, wrist strap that attaches to the sword pommel. The kit arrived in rather basic but safe packaging, a sturdy white box adorned with the box art by Kirill Kanaev and with parts held secure in ziplock bags inside. Once again the over exposed and saturated photography does the boxart no justice whatsoever, as you can see from the images I have used of Kirill’s paintjob, they are far better than those adorning the packaging, which for me is a simple fix yet also somewhat baffling why they are used in the first place.

The main piece consisting of head and shoulders is actually full of details and textures, with plenty of various elements to make this a challenging project. It depicts a Chaos Lord although there definitely is a Dwarf like resemblance with the long beard and Mohawk so prevalent with the GW slayer type Dwarf. The face is expressive, open mouthed baring large canines, hooked nose with hooded brow and a series of small horns bursting from the skin across the forehead. The hair and beard is particularly well rendered with nice texture, good depth to the hair clumps and crisp definition to individual strands too. Sections of the beard are plaited with decoration again reminiscent of Dwarves. Both ears are full of iron rings and adds another level of detail. 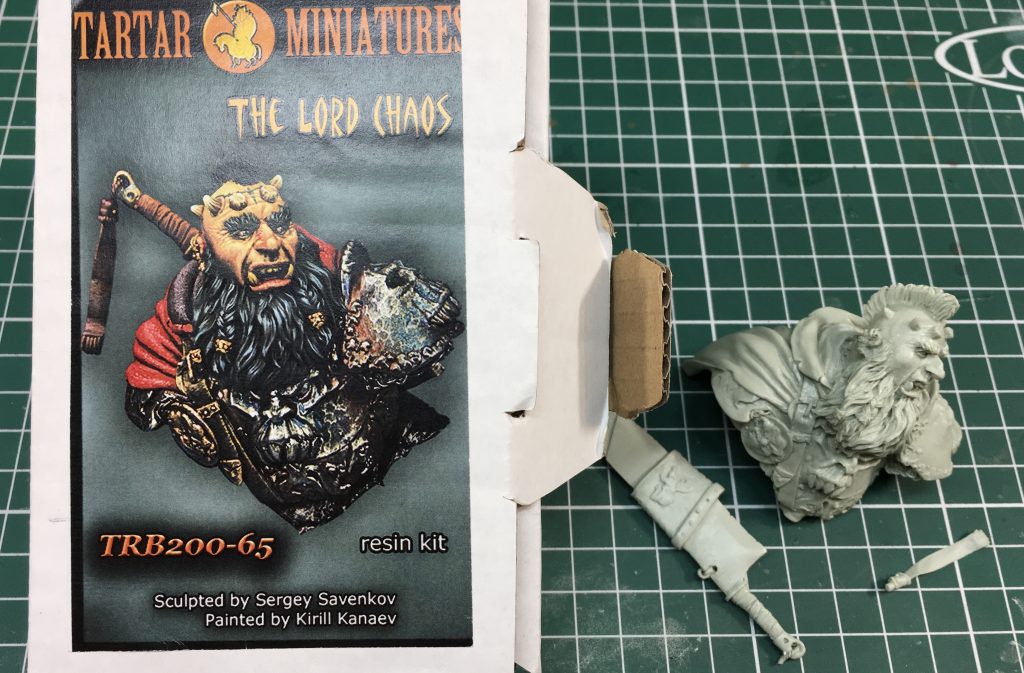 The kit in full – but notice the difference in boxart image and the photos from Kirill, such a shame!

There are hints of a chainmail undershirt under the left shoulder guard and around the neckline, the torso is heavily armoured including ornate and heavy looking protection to both shoulders, the left shoulder guard has a skull worked into the metal work whilst the right is predominantly covered by the hooded cloak that trails down the back. The cloak itself displays nice and deep folds that should make painting it enjoyable with strong shadows and contrast. At the rear bottom of the hood we have a triangular hole to accept the squat and brutal looking sword.

The skull design is continued onto the chest armour with another embossed motif, rather crude looking in it’s execution and beneath this we have a horizontal stream of icons, depicting what look like demonic caricatures. We have a leather strap that peers from beneath the hood over the right shoulder and down the chest, crisp detailing to the metal elements such as the buckle and strap end. To the right of the strap we have a circlet again decorated with a caricature demon motif. All of these subtle clues hint to the nature of the Chaos Lord. 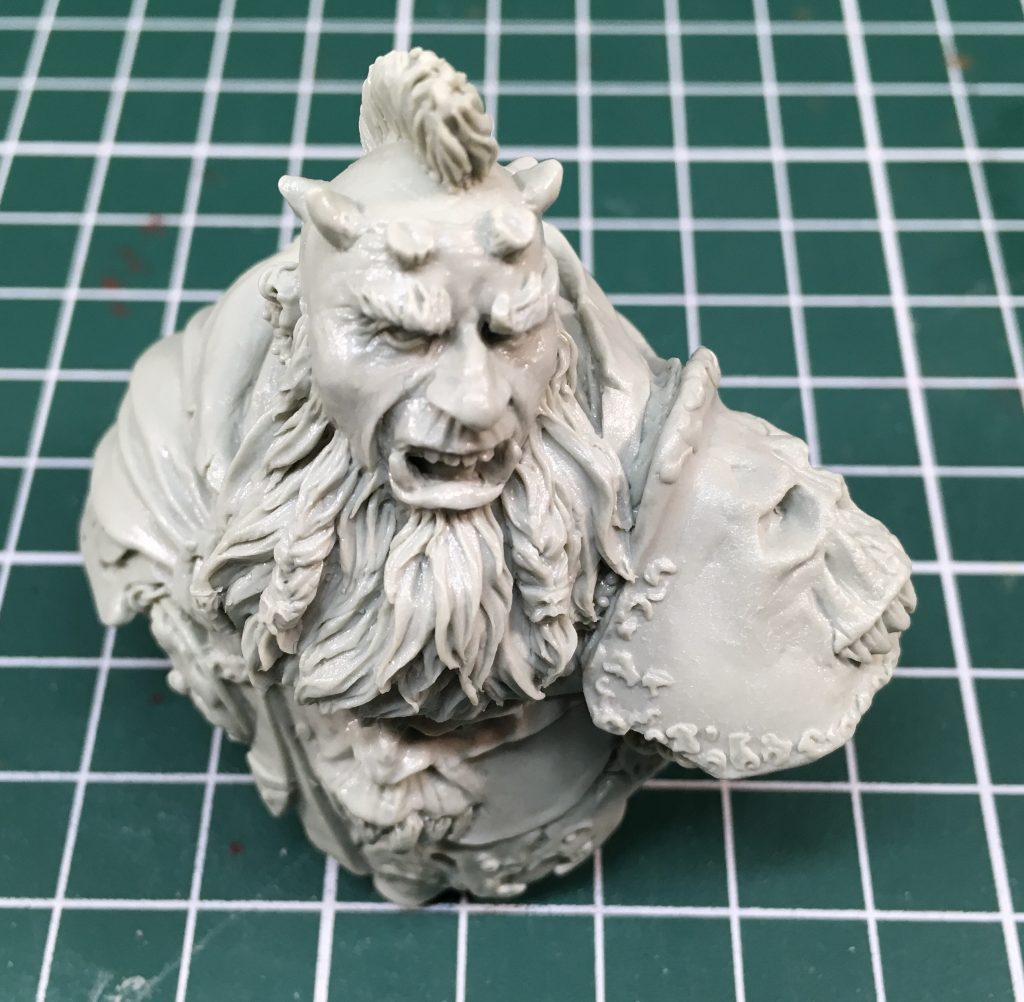 close up of the lovely textures and various elements

The brutal looking chopper has a nice squat and blocky shape to it’s design, the cutting edge is slightly serrated, chipped and damaged. The strapping to the hilt is well done and it is nestled inside a partial sheath adorned with a rather clumsy looking motif of a four legged animal perhaps a lion. It looks as if the sculptor has attempted to display these motifs in the way in which a brutal and demonic lord or one of his minions would have sculpted the pieces rather than himself sculpting them perfectly. The end of the blade is cut at a diagonal and there is a thin section of resin which will need to be cut away and filed smooth. Then it is just a matter of carefully attaching the wrist strap to the pommel. The cast is actually pretty good, no major defects at all such air bubble holes or casting slippages with just the one mold line that sweeps down the cloak over the shoulder, which should not pose to many issues at all.

The design is quite simplistic yet well balanced, presenting a nice silhouette, I quite like the traditional bust styling with no arms as it really gives you the opportunity to make the face the focal point. It is difficult nowadays to claim that anything is original, yet the mixture of demon and Dwarf works well. The various elements all have decent surface areas for you to do more than just paint, for instance you can see the various painted textures and effects in Kirill’s boxart. This is a kit that will definitely benefit from this painting approach, also adding tattoos could be another good way of adding more visual interest. 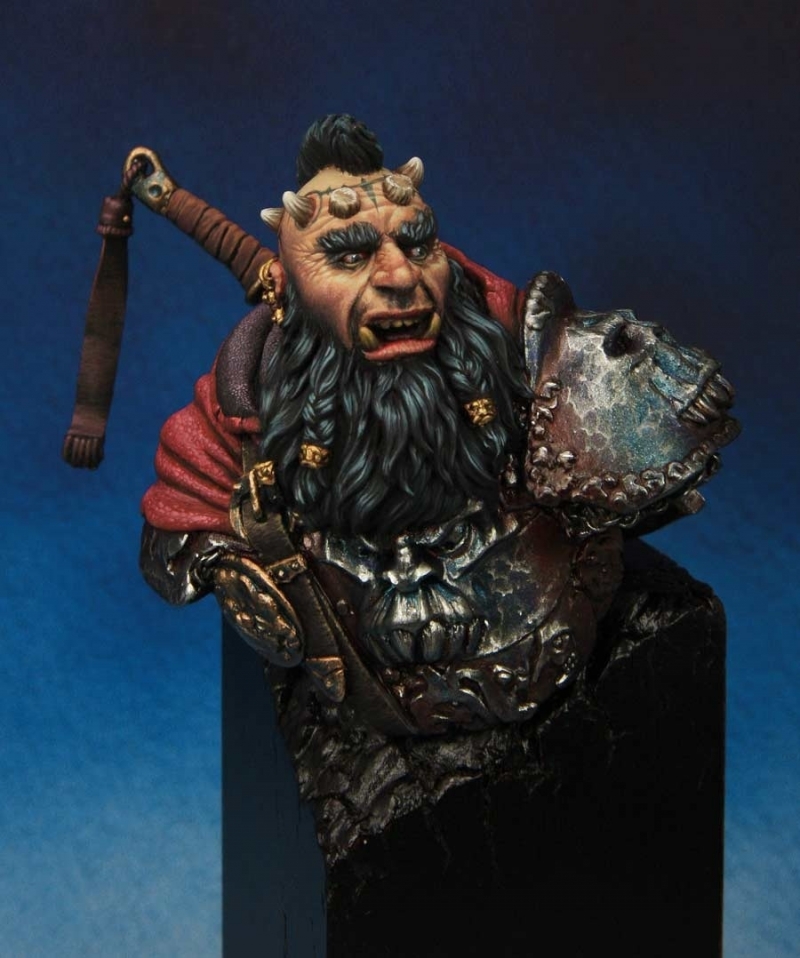 The size of the bust at 1/10 is an ideal size in my opinion, large enough to add textures and effects to your painting yet small enough that it still will not take too much time to complete. This was released a while ago and suffers as most older kits do in the sense that there is a plethora of new kits hitting the community every week. However, this would still represent a fun project for painters of all skill levels.

At €36 I believe the price is on par with what we expect when purchasing any kit yet for me this would be pushing the limit to whether I would buy it baring in mind how the market is awash with so many new releases. I would still recommend the kit and hope to see more fantasy based releases from Tartar Miniatures in the future.