Banshee Workshop – a lesson in Colour by Steve Bodycomb

Did you hear the one about the politician, the gangster and the prostitute? No? Well I guess you haven’t been privileged to attend an Alfonso “Banshee” Gilraldes Colour Theory Masterclass, a Banshee Workshop.. The three characters above are how he described the relationships between colours. The blue of authority, conformation, the yellow the gangster or dealer, working with whoever whatever it needs to get results. Red the whore, the passion, the brothel. The place where all three are likely to be found together.

Alfonso delivered a relaxed, straight from the hip machine gun spray of information that at first left you reeling in what had just happened. However, the seemingly haphazard volley of fire hit home with every shot, not one bullet missing the target. Even when telling one of his, numerous, asides they all intricately weaved their way back to making a salient point about our Artform.

The course was delivered with the passion, heat and energy that only a person passionately in love could muster and believe you me Alfonso is truly, madly, deeply in love with colour. If you think going on a two-day course with a master Artist would be an easy going, paint a bust with a genius, then go home, think again! A course with Alfonso is like a week of a lesser mortal. He makes it clear at the beginning that if you think it’s just a jolly then go home, he even said he’d refund the money. But believe you me by the time he said this, about 15 minutes into day one, not one person in the room flinched, so transfixed by the words coming from his mouth. Apart from the accent you would be hard-pressed not to think English was his first language. 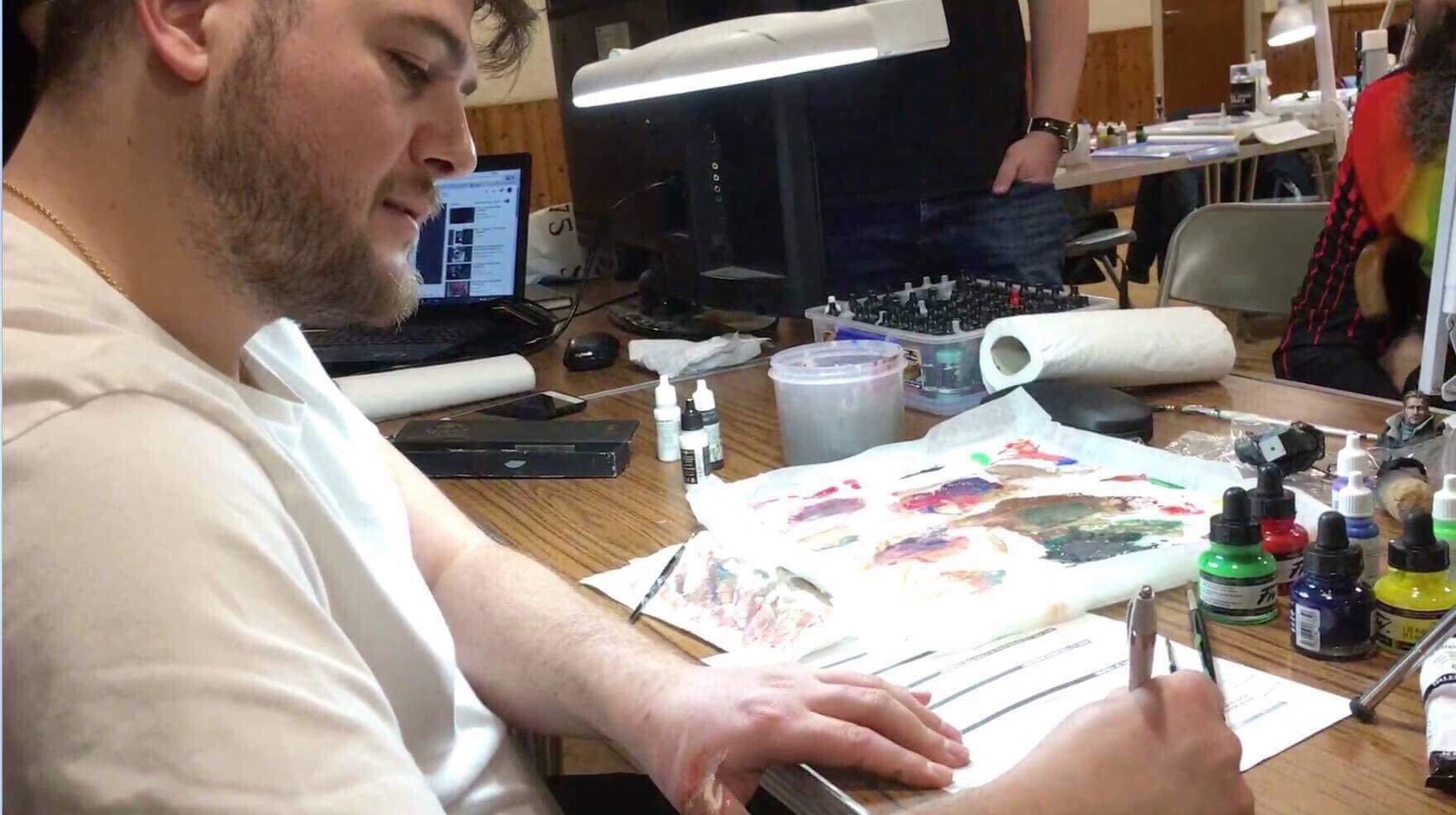 Alfonso talking of his love for colour

His exposes on miniature painters of the rivet counting-type, who criticise that the colour used on a figure wasn’t british uniform green etc. rightly pointing out that in real life, in the field, uniforms would vary greatly in colour due to a host of reasons such as wear, faded through washing or sun, the dirt and dust they may be carrying, etc, etc, etc. He amusingly pokes fun at those historical artists who say non metallic metal NMM is only for fantasy painters and not for historical miniatures.

He amusingly points out that historical masters such as Caravaggio, Valesqueth etc didn’t have Cidadel Leadbelcher, or Vallejo Steel (other brands are available) to use in their masterpieces. They used NMM techniques to reproduced some of the most realistic metals ever painted. He goes one-step further to point out that the ‘fantasy’ only Artists are in fact historical artists as they are using techniques created by some of the greatest Artists in history to create their own little piece of history in their work of art. Game. Set. Match Giraldes. This isn’t said with any venom but to drive home his point about our art being just that Works of Art. 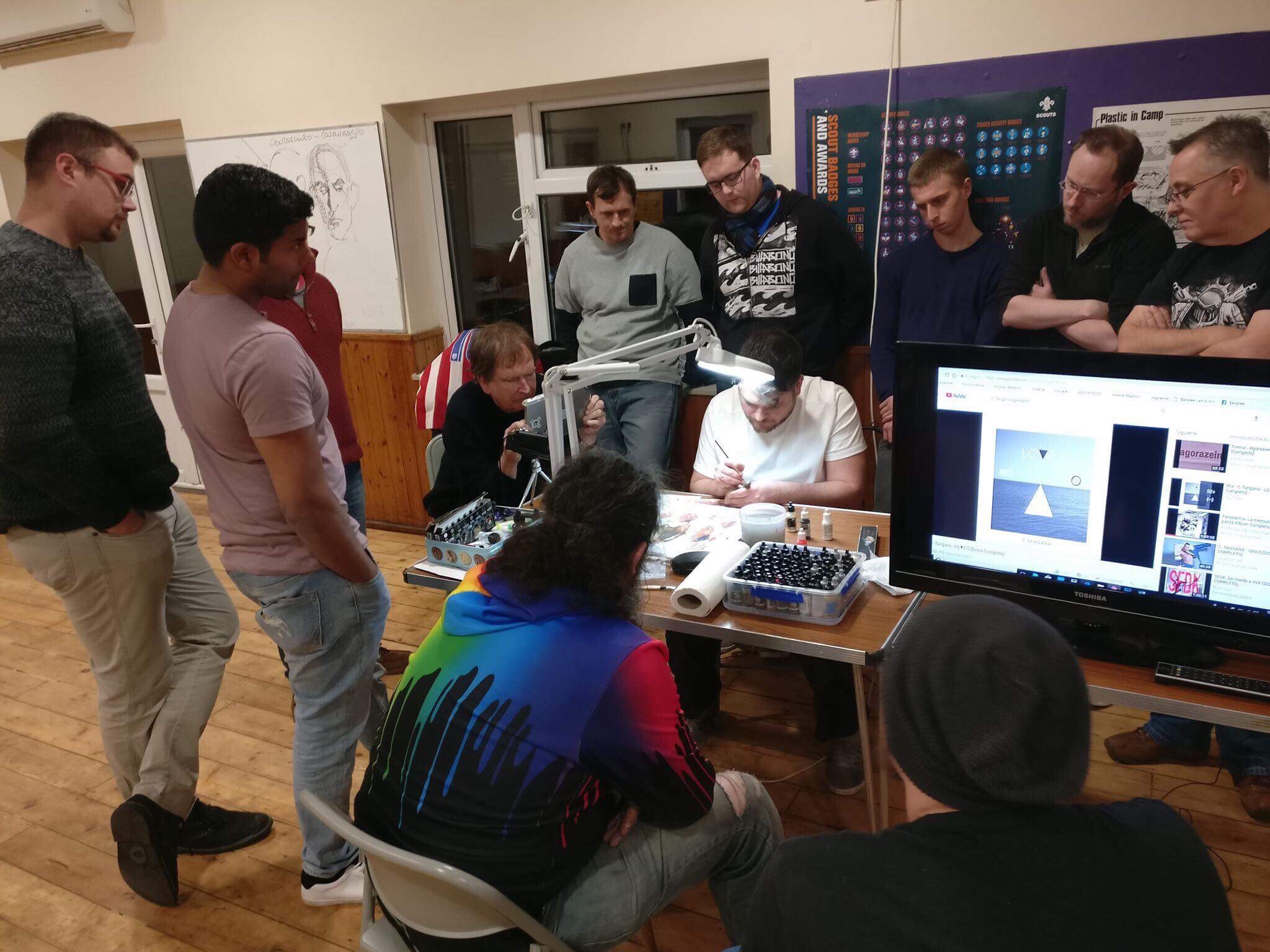 #fucksmoothness and WHEN DO I GET TO PAINT?

He continues about why this is the driving force of the #fucksmoothness theory; to challenge himself and other miniature Artists to rather than just paint miniature after miniatures in the same way, smooth, shiny etc to push the boundaries of our painting, to get our Artform to be recognised in its own right as Art.

As for painting a bust, forget it he said for day one, we may get on to it at some point in day two. But first he wanted to explain his take on colour theory and get us thinking about how we use colour. Describing, showing and giving us exercises to do as we explored the art of colour.

After day one I arrived back home exhausted, believe-you-me, a day with Alfonso really is a day. We started at 10 am and finished at 8.30pm with a short break for lunch (and very tasty was that too). I think had he been able to he would have continued but the restaurant had already been booked for the evening meal. 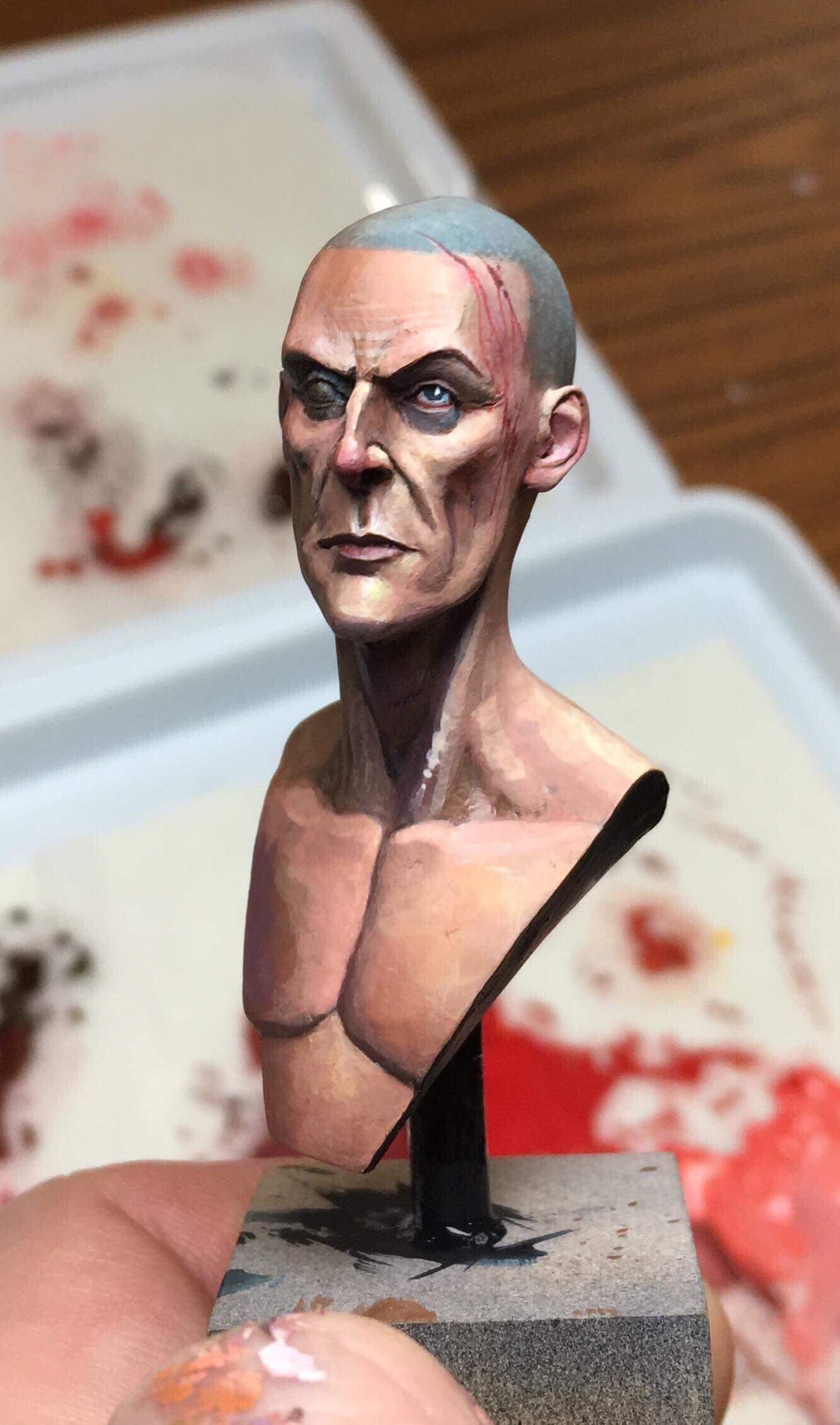 If you think there’s a danger of information overload, forget it. Everything is tailored in such a way that each person absorbs his wisdom at their own speed and saturation. At the end of day one I realised that my A4 wet palette was just not big enough for all the colours I had created, and all from five basic hues.

Day two and armed with wet palette of heroic size saw more of the same; after a brief recap from day one came the ‘exercise from hell’ as Alfonso laughingly called it but by the end of it you had created a whole host of new colours mixed from one mid-tone colour from hot to cold, light to dark – just to show the possibilities we have as artists.

And then after lunch. The moment we’d all been waiting for. A bust. And not just any bust. We were extremely fortunate to be the first class to try out Alfonso’s new Anonymous 2 bust, a stunning work of Art, even without any paint on it. Before Alfonso let us loose for 90 minutes or so of sketching we had to come up with our own narrative for the bust which he sat and discussed with us each in turn. Asking how or what we had planned or thought to try. Alfonso would offer his suggestions to help us and then away we went mixing up colour recipes. After what seemed ages, I’d always struggled to paint in short bursts and yet here I was with a painted bust where the groundwork had been laid firmly on which to create my work of Art. 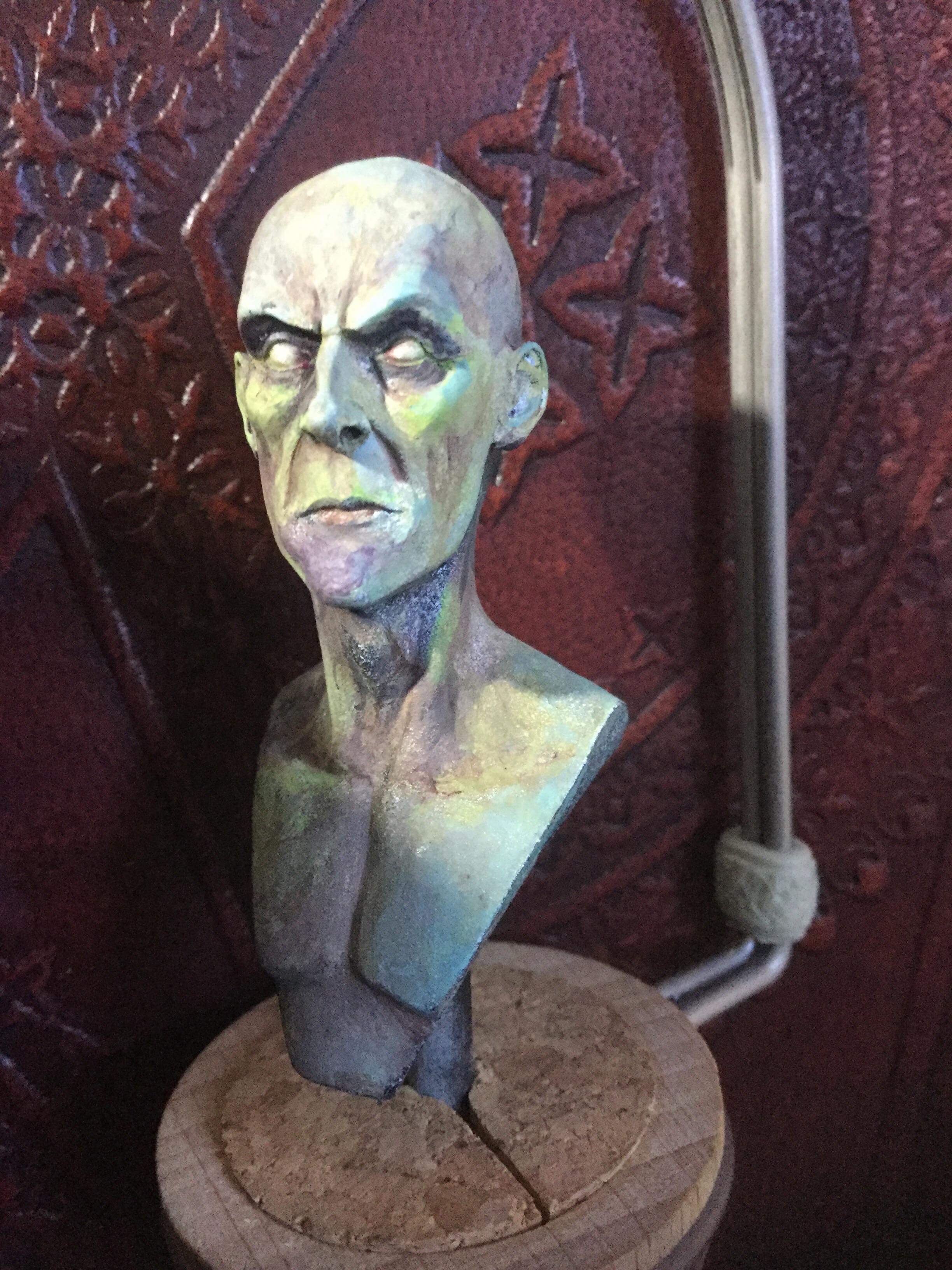 foundations of my own creation

And then came for me, and I guess most of the others on the course, my highlight. Watching Banshee create a masterpiece in around 90 minutes. Not only did he paint it so quickly but also included descriptions of what and why he was doing what he did, and after every key step he stopped to hand the bust around to us so we could all take a much closer look of what had been done.

The level of the man, and knowledge that he imparts is such that some course participants were on their third time of attending his masterclass, and they all said they were still learning new things as they understood and explored the boundaries of their Art and as they developed as an Artist. 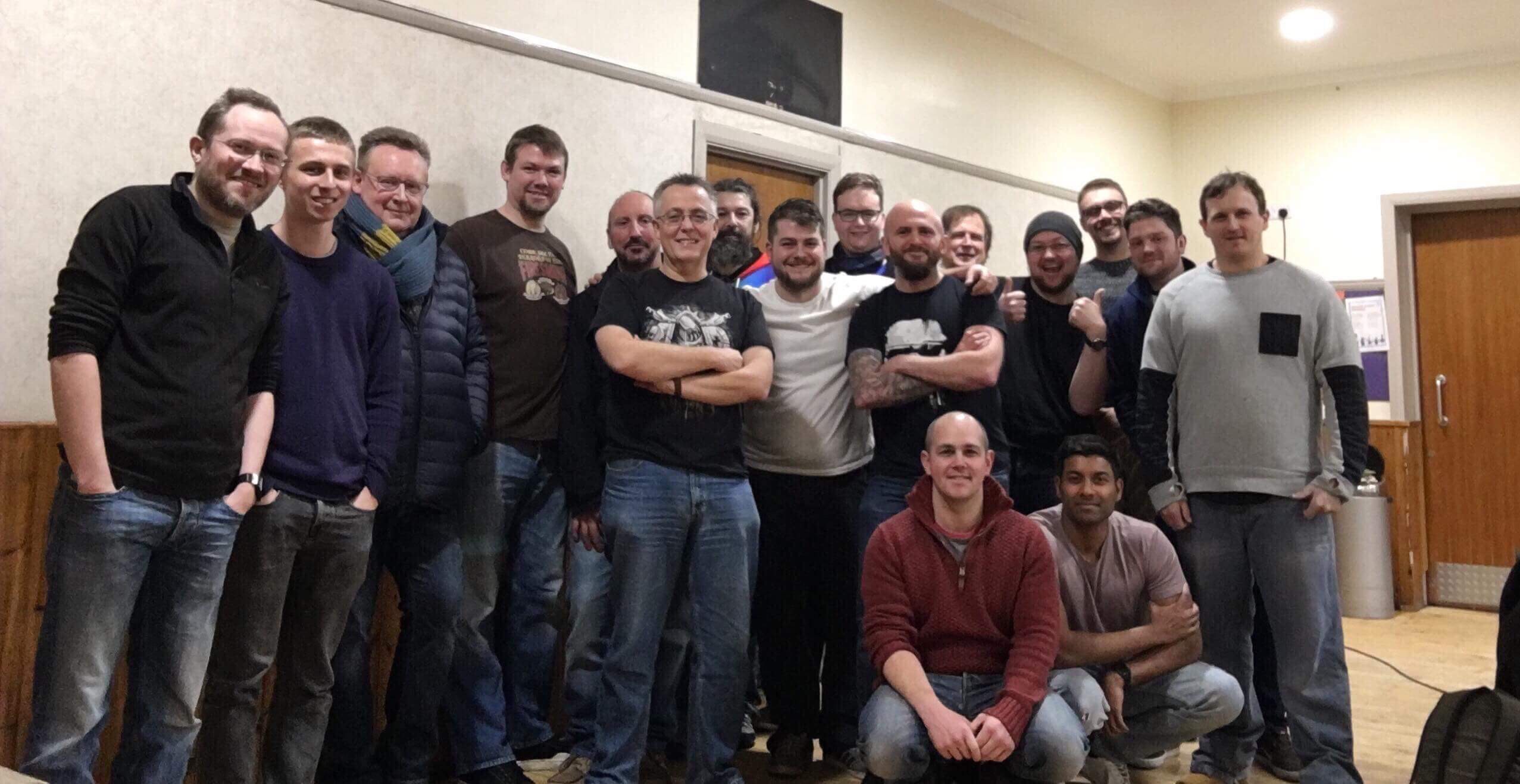 The venue was brilliant and Tim Marsh and Mally Anderson, the event organisers, deserve a huge pat on the back for ensuring everything ran ultra-smoothly and without hiccups. And that wasn’t easy considering the weather we’d had.

Personally I will be the first signing up for his next course and I know many of the other attendees will be clambering to do so as well.

THE BIRTH OF JOURNEYMAN MINIATURES

Masterclass organiser Tim Marsh said the courses have proved so popular that they have decided to run more masterclasses and have already lined up Michael ‘Lan’ Pisarski for two masterclasses in September, one in London the other in Hull. Plus they have another five or six in the pipeline but he wouldn’t divulge the Artists.