RISEN FROM THE ASHES 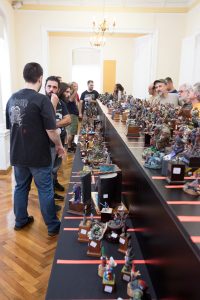 The hall begins to fill

With local Greek modellers like Michael Kontraros, Thanos Vasilikos, Christos Panagiotou, Christos Panagiotopoulos, Kyriakos Simos (but to name a few), and with Workshops hosted by the Alexander Cortina Bonastre, Ben Komets and Francesco Franciuus Farabi, the Athens Miniature Show was a huge success.

Located in the centre of Athens the 2016 Athens Show was housed on the top floor of a neoclassical building, home to one of the oldest private art schools in Greece – Plakas Foundation Studies.

This wonderful venue was perfectly located – accessable by bus and metro – and only a short distance from the National Archaeological Museum and the Acropolis! 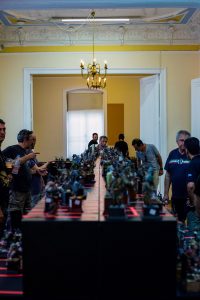 “Organise it and they will come” (movie buffs will recognise where I am paraphrasing from – for those that do not know – it is from “Field of Dreams”). The venue was ready, the floors swept and mopped, the tables and stands set up, the posters mounted and the volunteers ready and waiting to assist the visitors and participants.

It was Friday June 17th and the Athens Miniature Show was officially open – the models slowly started to trickle in, steadily the display areas started to fill up.

Visitors started to fill the halls, there was a “hum” around the place; people talking, friends seeing each other after a long time, swapping stories, ideas and modelling techniques. The “hum” slowly became a “buzz”, Greeks are noisy at the best of times, let alone when they are having fun!

The War gamers were battling it out in one room, the speed painting contest was taking place in another, children of all ages were for the first time coming into contact with the hobby in another room, and suddenly the “buzz” became a “boom”. 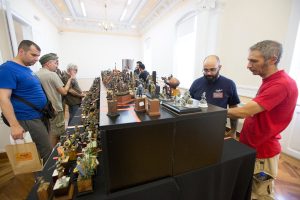 The Italians had arrived, the Athens Model Show was honoured to welcome the Alfa Model Club of Rome and the Clubmasc MASC. Their presence was spectacular! For those that don’t know: a certain recipe for noise, fun, laughter and general merriment is the combination of Greeks and Italians.

The display areas were full, Standard/Master Painting – Fantasy/Historical, Open Standard/Master, Dioramas, Juniors, Judges, Collectors, Wargames….it was pure modelling heaven! And like a cherry on a cake, sprinkled amongst the plethora of wonderful works of art were pieces from Alexander Cortina Bonastre, Ben Komets and Francesco Franciuus Farabi. You can see all the photographs of the miniatures HERE!

WORKSHOPS WITH THE MASTERS 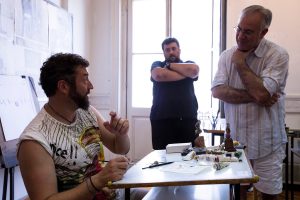 Alexandre discussing oils in his workshop

Day two – June 18th continued with the same sweltering heat, which surprisingly did not seem to stop people from visiting the show! What was different about today? – The workshops started!!! First to go was Alexander Cortina Bonastre, a privilege to watch him work and have him explain his techniques for oils – pure magic. Next was Ben Komets, and the topic was painting non-metallic- the buzz and smiles of all the participants as they came out of the workshop I think said it all.

The day slowly came to an end and what better way to cap it off than with dinner Greek style – OPA!!! Greek Taverna, Greek music, Greek salad, tzatziki, saganaki, gyro, kebab, grilled chicken, wine and tsipouro (if you don’t know what these things are, come by the Athens Model Show next year and we will be happy to introduce you to Greek cuisine and fun).

The table was 50 or so meters long, the eating, singing and dancing continued long into the night, there are pictures, there are videos, but ultimately “what happens in Athens, stays in Athens” as someone put it (he will remain anonymous) – THE NIGHT WAS EPIC!

The Last day of the Athens Miniature Show started in the best way possible – a Workshop by Francesco Franciuus Farabi on how to paint skin and flesh. A true eye opener in technique and use of acrylic paints, it is always a pleasure to watch an expert at work.

By this time the venue was full, the shops working at over time to accommodate the guests, the cameras snapping pictures of all the magnificent models, and the noise levels slowly rising as the event worked towards the award ceremony. 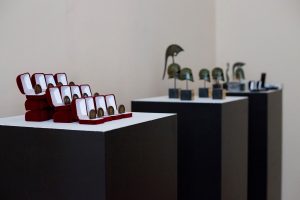 Everyone gathered in the main hall, packed to bursting, the ceremony started. The judging was fair but strict, the medals were handed out amongst cheering and clapping and it all continued smoothly, until the smell of Greek souvlaki started to waft through the air.

Fun and satire is part of all Greek celebrations and what better way to pay tribute than having two special awards; the “YOLO Award” (You Only Live Once), and the “Vlamenos Award” (loosely translated from Greek as the silliest person award) – The winner of the “YOLO Award” won a prestigious basket of two Greek Gyros, Fries and a Coke !!! and The winner of the “Vlamenos Award” received a traditional Greek Souvlaki on a stick (does size matter?).

All in all it was a wonderful Show, new friendships were made, awards were won, food and alcohol consumed to excess, and above all in true Greek fashion a great deal of fun was had. Athens Miniature Show…hope to see everyone again next year! 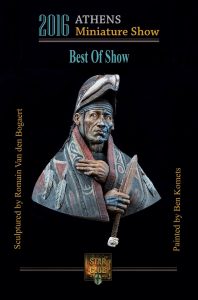 Best of show by Ben Komets