An Insight Into Spawning Pool Studios with Sheridan Doose

This write up is a little different to most things we have previously done, it is neither an interview, article or review, rather it is a combination of the three. I had the opportunity to speak with Sheridan and get the low down on the inspiration behind the various concepts and thought I would put this together just to give you an insight into Spawning Pool Studios. Having received all four at once, any specific review I did would have a lot of redundant information as I repeat myself over and over. I hope you will enjoy the following instead. Over to Sheridan! 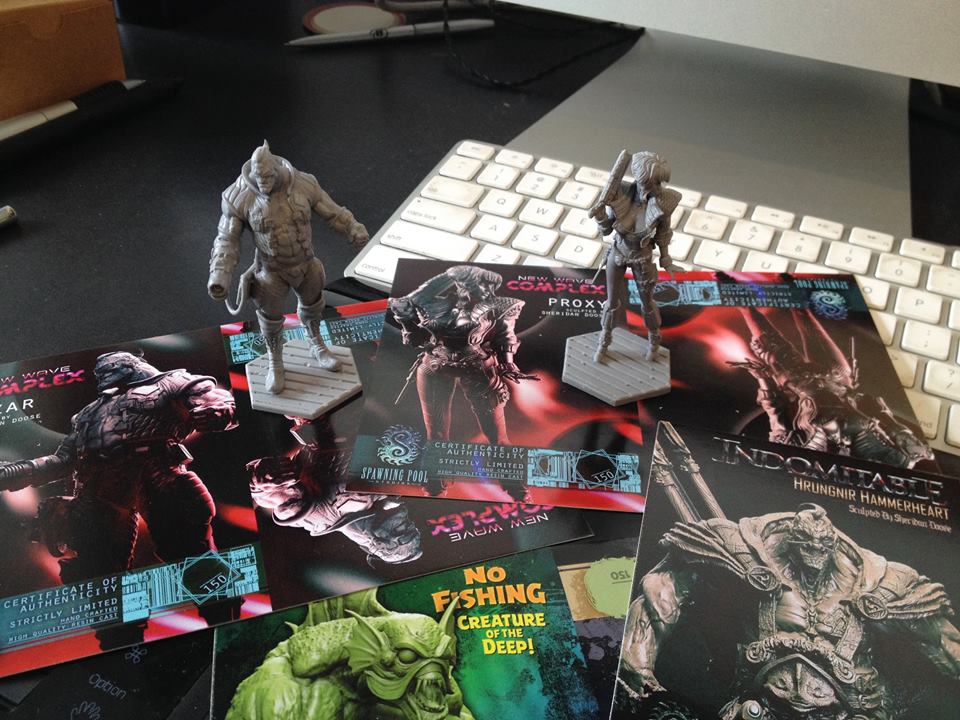 Sheridan – Spawning Pool Studios is a collaborative effort between my dad Henning and I. One of our aims is to handle as much as we possible can in house and to learn the ins and outs of the process ourselves – that means concept, sculpt, casting, packaging and shipping are all handled directly by us right now. We still get the 3D printing out sourced, but eventually we would love to get a solid printer as well.

We haven’t started working with any other designers or painters yet, still getting our footing and trying to get more pieces up and available. Once we have stabilised a bit, we will be looking to get some studio paint work done on future releases. I’m fortunate enough to know some insanely talented artists and designers who I’d also like to collaborate with in the future!” 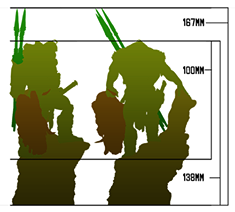 Hrungnir is a colossus

The larger kits arrived in a black cardboard box, the smaller in a white box, each sealed with the spawning pool logo sticker. Inside we find the parts safely packed away in ziplock bags and nestled between packing material. Each kit comes with an A4 assembly instructions sheet, which is a nice touch. In addition, you also receive a high quality, signed and numbered certificate of authenticity.

Generally speaking the casts are of a high quality throughout, crisp detailing, great textures, sharp undercuts where appropriate, dynamic poses and nice composition. There are no major defects such as air bubble holes or slippages although some moldlines can be found and I would suggest preparing these kits just like you would any other.

Another point I would like to make is the quality of the print, I have painted 3D figures before where you can see the striations as it was printed (stacked layers), not so with these kits. Where the parts are suppose to be smooth, they’re smooth, where textured they’re textured!

The Hrungnir kit for me is the standout piece of the releases so far and it is massive, even though it is 75mm scale, because he is a Goliath, he is particularly large and impressive. The kits are cast to order but there is a quick turnaround time and shipping seemed quick and relatively cheap too. Be sure to wash all parts with soapy water before you begin painting just so as to ensure all casting residues are removed (Ed). 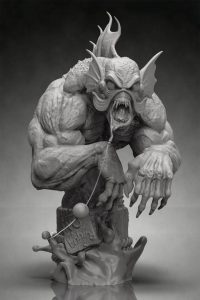 Sheridan – No Fishing is a 1/12, twelve part, grey resin bust which was digitally sculpted by my dad, Henning Doose. It is the first of a series of busts entitled MONSTERS! My dad was inspired by a Simon Bisley painting of the creature, but the concept is more of a deliberately humorous take than a cheesy one. The next busts in the line will be of a similar nature… not taking the old monsters too seriously, and putting them into funny every-day sort of situations.”

The bust costs $45.61 and is a limited edition of just 150 copies. Dry fitting of the pieces, in particular the arms, show that you may have to do a little gap filling but other than this should be a rather straight forward assembly and the length of wire for the fishing line is a nice touch (Ed).

Sheridan – The New Wave Complex was originally called Escape From New Wave Complex.. it was a small project I did with a bunch of friends for a weekend long game jam in 2014 where we attempted to make a top down shooter akin to old cartridge or arcade games like Gain Ground and Smash TV. Whereby two cyber criminals attempt to escape a space prison complex. 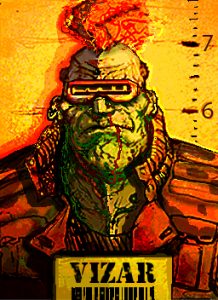 I drew up some quick concepts for Proxy and Vizar, inspired by my favourite cyber punk tropes from anime, movies and novels (most notably Cyber City Oedo for Vizars look, though the mono-visar is a mainstay design motif from that time.)

Though the game was barely functional by the end of the jam, my buddies and I had fleshed out enough of the universe that I really wanted to take it further and develop a line of figures around 80s and 90s cyberpunk and fuelled by new wave music… a complex more in the psychological sense of the word, paying homage to the works that have influenced me the most… stuff like Ghost in the Shell, Ranxerox, Metabarons, an obscenely long list of great stuff.

I usually crank a mix of the genuine 80s minimal synth and the new retro wave/synthwave stuff like Ghost, Mega Drive and Perturbator while I work on these. I’d like to continue fleshing out this universe with more themes from that era… more aliens, more bio mech, more cyborgs and robots.

Shout out to the great artists I worked with on the initial concept for New Wave Complex.. Mike Chung (http://balloonwatchermikell.tumblr.com/), Josh Haberman (https://artofjoshhaberman.blogspot.ca/), John Velarde (http://brozartz.tumblr.com/) and Adam Garib (https://adamgarib.artstation.com/) 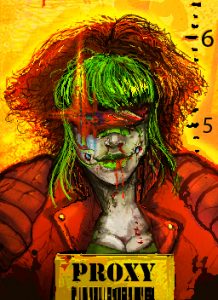 The whole piece was designed in 3D as I went along, I’m more comfortable sculpting than drawing for the most part. Some times I do a bit of rough sketching beforehand to help with my clarity of version for individual assets, but this one went pretty smoothly design wise.

What can I say these are two of my favourite releases this year. Vizar is a 1/24 (75mm) scale resin kit cast in eight parts. Hulking physique, wrap around futuristic goggles, textures to the body armour and an augmented weapon arm! What else do you possibly want in a sci-fi release? The fit of the parts is great with no gapfilling expected. The kit will set you back a cent over $57 but again for me represents great value for money. 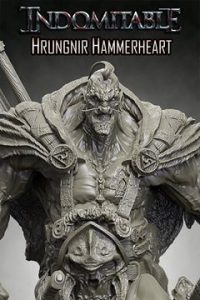 Proxy is herself a stunning miniature too! She is slender, lithe and deadly looking. Her facial features have similarities with the females of anime and her body armour reminds me a little of the psi judges from 2000 A.D. Our female hero costs $45.61 and comes in eleven parts although this is a rather straight forward build, once more you have the instruction leaflet. You can see Sheridans’ influences through this series of figures and all are limited edition to 150 casts only (Ed).

Sheridan – Hrungnir Hammerheart was also actually the Goliath I played in a long running DnD campaign put together by my buddy Josh, hahaha. I did a quick digital painting of Hrungnir’s portrait back in 2011 for the campaign, but he turned out much uglier and much scarier in his current form.

I took his first name from the frost giant of the same name mentioned in the Prose Edda – the “Brawler” who faces off against Thor. I also borrowed the symbol of the Valknut that represents his heart in the story, but my Hrungnir is strictly a fantasy character with influences of Norse Mythology, not meant to be a direct representation. I also listened to a fair bit of Bathory when I named him, heh.

Hrungnir is a big kit, consisting of an incredible 26 parts, although the build is relatively straight forward. The scenic base provides an excellent backdrop for this figure and it is covered in details and textures. The anatomy is over exagerated, the composition is balanced and I love the concept and design. This is a BIG project and comes with a hefty price tag at $114.35, yet when you take into consideration the size and quality of the sculpt and cast it still represents great value for your money (Ed).

The Indomitable line of figures features all manner of warrior inspired by different facets of human strength, their triumphs personified in the form of their monstrous trophies. Like a Beowulf and Grendel kind of idea, where Grendel represented the hardships of life in the North – Freezing winds, permafrost – the brutal elements and nature.

The series will have some small degree of allegory for those looking to read into the designs past face value. The limits of human exploration, technological advances, deep seated fears, crippling anxiety, the thirst for knowledge, addiction… all themes I’d like to explore and represent in the Indomitable mini-dioramas. 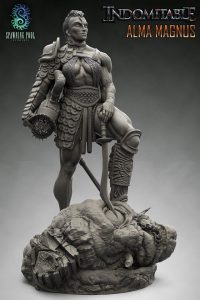 Indomitable Gladiator Alma Magnus is next in line for this series, just waiting on the 3D print.

We also feature some written works on the site, my younger brother is an emerging fantasy author! We want to do some kits and busts of the characters in his Sword and Sorcery stories as well.

Thanks again Jason.. hopefully I didn’t go too overboard with this… turned into a bit of an essay. Thanks to all our fans and here is to getting some more!