Why did I chose to attend Adepticon? As a miniature painter, I wanted to immerse myself in the work of other painters. To see their creations one on one and have the chance to share ideas and learn. I also wanted the opportunity to reconnect with painter friends I already knew. Finally, I also wanted the opportunity to display my own work. To try and show my ideas and visions. So after Gencon 2016, I made the decision to attend Adepticon and began working on an assortment of pieces.

EARLY START AND A WORKSHOP OR TWO 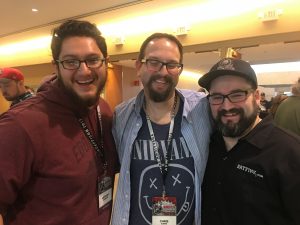 Anthony, myself and James

I left for Adepticon on Friday after kissing my wife good bye and getting the kids on the bus. It was a slight drive up to Chicago but I managed to arrive by early afternoon. I was fortunate enough to have a room at the Renaissance and checked in with ease. I wanted to get my competition pieces entered as soon as possible fearing I might make a mistake and miss the deadline. The wait to get my Adepticon badge was very short and so within minutes I was already in the hall and at the CMON booth.

The crystal brush case was simply awe inspiring. To be honest I don’t know how European competitions compare but I doubt there’s anywhere in the US where you can see so many high-quality pieces in a single area. After dropping off my entries I took time to look through the cases. So many stunning pieces. My head began to fill with ideas for future projects and I had only been here for maybe an hour.

I headed back to the painting lounge to meet up with my friends Seth, Dallas, Kat, and Nick. Hugs were exchanged and we began discussing all the projects we had been working on and those that inspired us in the case. Kat and I had the same first class with Russo on atmosphere. To be honest I was expecting something a bit different but the class was still informative and Russo was a great teacher.

He was easy to understand and took the time to go around to each student multiple times to review our progress. Soon after the first class I began my second class with Russo on colour variations. He walked us through how he selected hues that could be manipulated from warm to cold and across the colour wheel. For instance, taking a yellow green cloth and manipulating it to a violet thanks to the common blue hue within both colours. 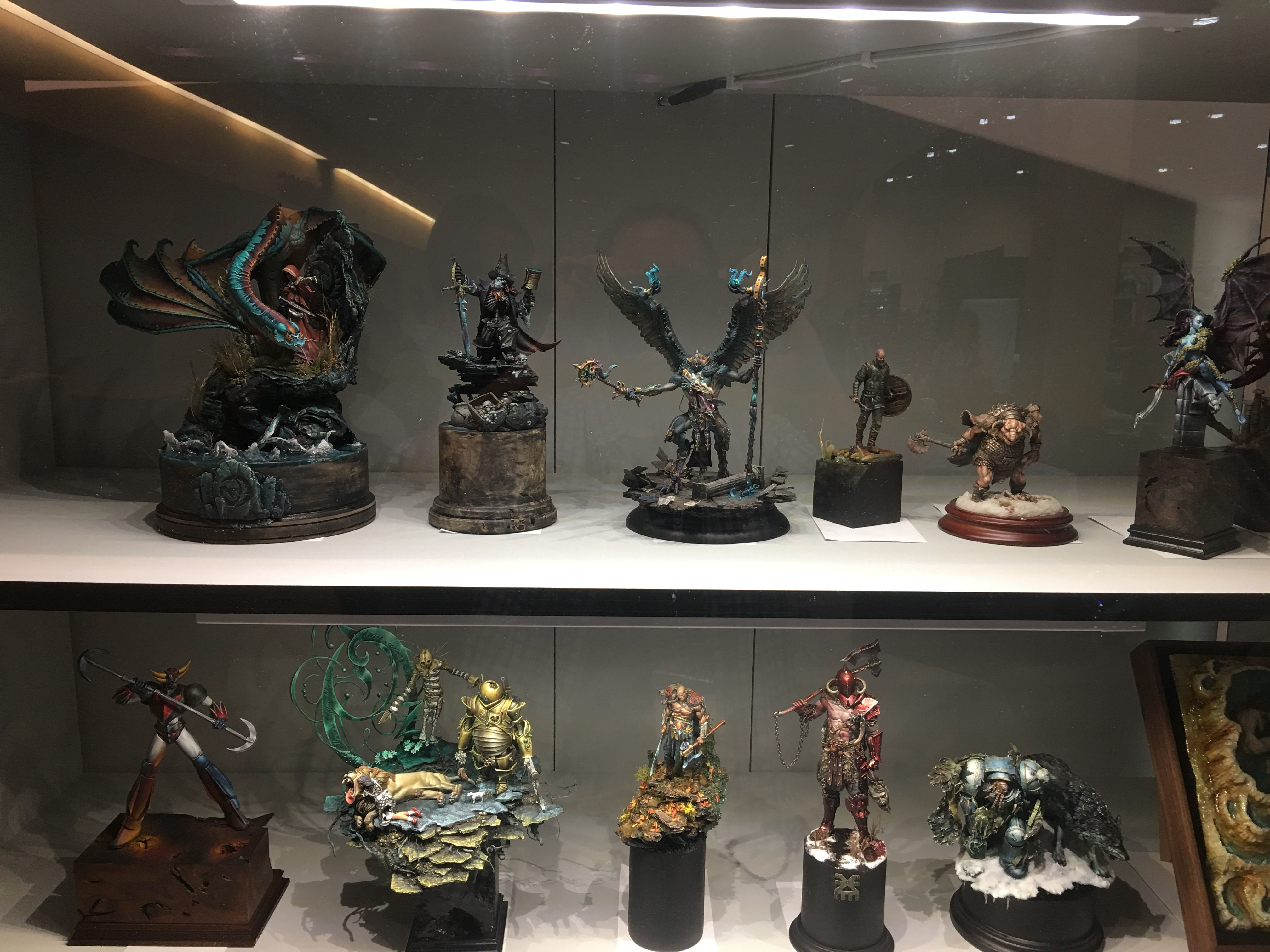 my pieces alongside those of Komets, Farabi, Palacios, Picca and Kontraros

TIME FOR SOME SOCIALISING

After class, Seth took myself and our friends out for Chicago style pizza at Giordano’s. The food was great. I’ve never really had the thick Chicago style pizza but now I see why people rave about it. Even though the food was great it was the company that made the night special. We finished the night off with beers at a local beer market while we made wild predictions about who would win the crystal brush overall.

After having spent the previous night up late talking painting with friends, I awoke Saturday morning excited to see what the day would bring. After grabbing some breakfast, I went off to the vendor hall with some friends. Now, I have little experience with a variety cons. For the most part I’ve attended Warmachine weekend and Gencon on a yearly basis but that’s about it. I found the vendor hall at Adepticon to be just about right. A nice selection of vendors focused on miniature games and miniature painting but without the seas of people I so often encounter at Gencon.

Myself and a few friends also went back to peruse the Crystal Brush case and discuss the entries again. While looking at the entries I got to meet Ben Komets and Raffaele Picca for the first time. These are two artists I admire immensely. Since I started trying to up my painting game years ago, these are two artists I have followed intently. Massive voodoo and Ben have made huge impacts on my development as an artist.

The chance to meet them, shake their hands, and tell them what their work has meant to me was great. On top of that they both inspected my entries and told me how they enjoyed the Dragon piece. Words like that from artists I admire, well that just made my day. Little did I know the day was going to get even better.

ADMIRING THE CABINETS AND TIME FOR ANOTHER MASTERCLASS 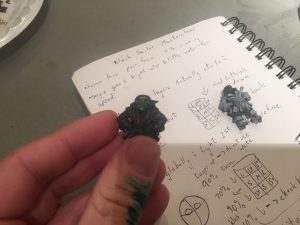 To be surrounded by so many artists, to be exposed to so many different techniques and views, is amazing. In the mid-afternoon, we found out that the pictures of the entries that made first cut were up. It was so exciting to see two of my pieces on there! To see them in the same categories and among artists that I admired wow! But what was even better was seeing so many of my friends also qualify. In particular, seeing my buddy Seth qualify. He had pushed himself so much over the last few months and to see him make it through with his Zelda piece was phenomenal. The next couple of hours were just spent looking at all these gorgeous entries. Going over them with friends. Telling stories about the ups and down’s we had with creating our works of art.

In the early evening, I got to start my class with Sergio and Jose. It was a Master Class on a Black Sailor Miniature. It was great! Jose walked us through how Sergio approaches the most important part of a mini, the face. Before starting the face, Jose went over how to approach the lighting by using illustrations to break the area down into smaller more manageable parts. Sergio often starts at the first shade and works his way up using small dots and lines of the highlights to bring out the features. They discussed their approach to eyes and where they typically place their highest highlights due to facial anatomy. We then also discussed using glazes to tie the entire project together. I do not consider myself to be a speedy painter by any means. However, at the end of our 2-hour class I had a pretty decent face for my black sailor miniature. A result I was extremely happy with. 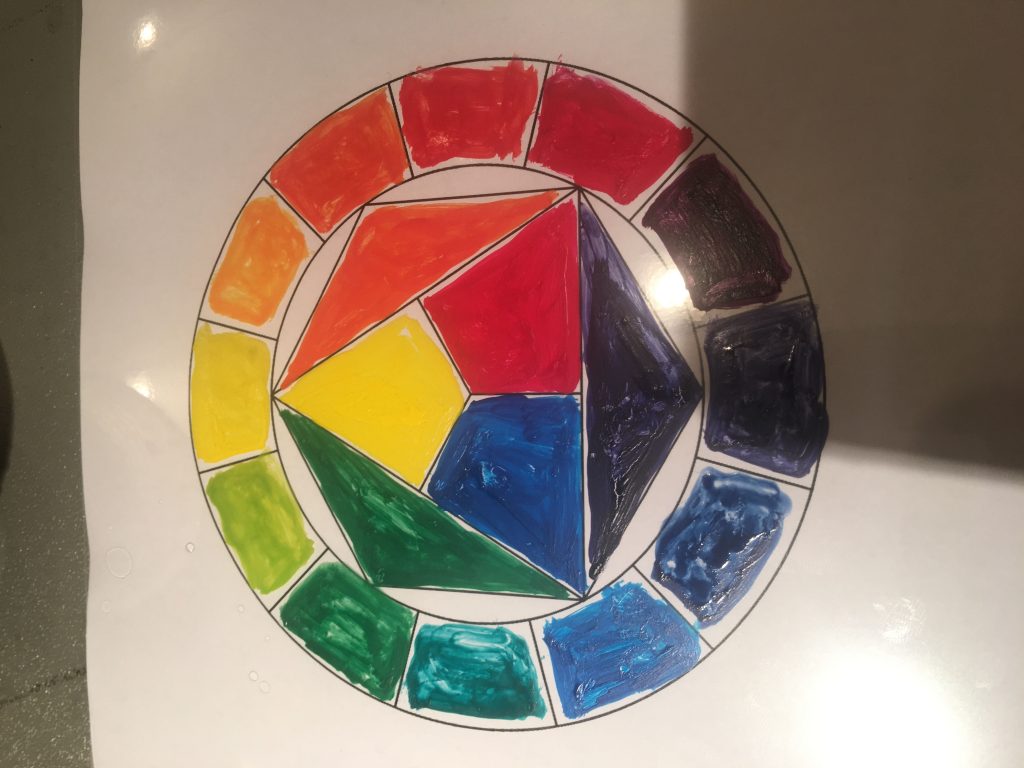 I pretty much went straight from Sergio’s class to Raffaele Picca’s: Rethinking the Colour Wheel class. Raffa provided us with booklet of the information he was going to cover and had a presentation all set up. We spent the next 3 hours covering the basics of colour theory, temperature, Gamut, etc. By no means would I consider myself an expert in colour theory but I wouldn’t say I’m a novice either. I found the class to be fantastic. Raffa walked us through composing our own colour wheels. Then we spent time discussing how to go from one hue to another, about saturation, and value. Raffa even came up with visuals for use on how to perceive the colour wheel. We then spent time mixing hues to create our own skin tone using just primaries.

We then repeated the exercise mixing various out of pot hues using only the primaries. I know Raffa has plans to teach this class in the future at other conventions. I cannot encourage you enough to take the opportunity if it arises. Not to mention Raffa’s English is very easy to understand and he’s just an awesome guy too.

That pretty much finished off my second day at Adepticon. The day had been so fun and jam packed that I hadn’t eaten since breakfast so I went up to the hotel bar at 1145 and grabbed a nice burger and fries before heading off to bed with a million ideas swirling in my head. 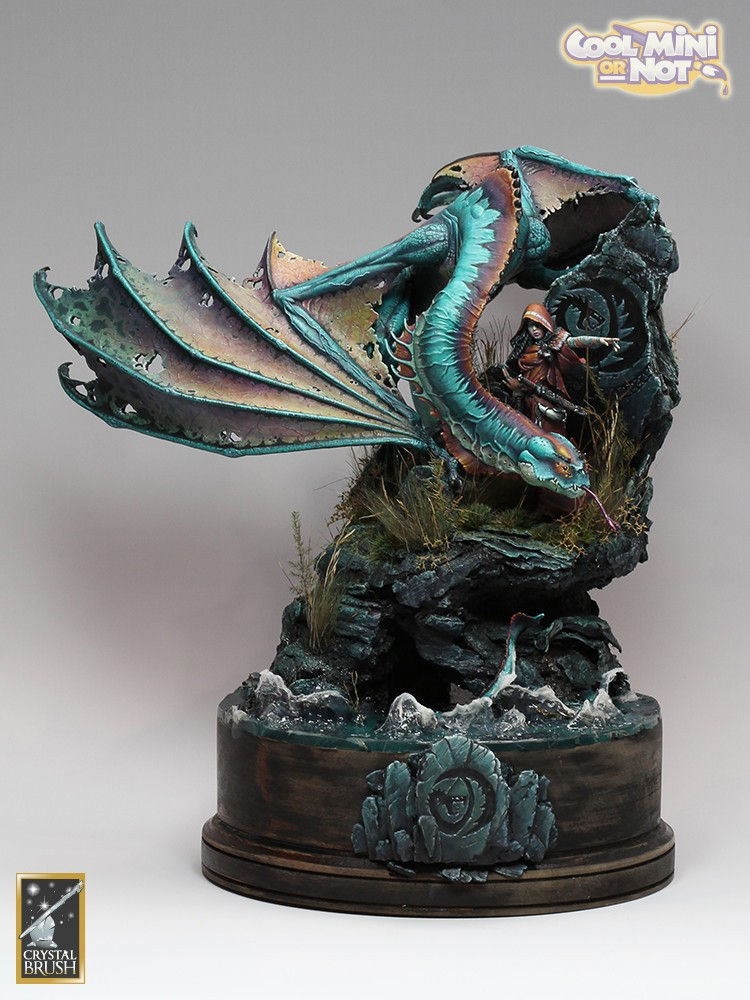 Those swirling ideas in my head, kept me up for the next 2 hours while I sketched out ideas for new projects in my note book. So, I awoke a bit late on Sunday morning. Grabbed some breakfast at the hotel and went back to check out the vendor hall for any last-minute deals. I returned to the Crystal brush case to inspect all the gorgeous artwork one last time before collecting my entries.

I then sat down with Jen Haley and James Craig for some valuable insight and critique on my entries. Points and ideas, I most certainly plan on applying to future projects. Afterwards it was back to the painting lounge to hang out with friends before the award ceremony. I managed to talk with Caleb of CK studios for a while and acquire a couple of gorgeous plinths from him. If you need display quality plinths in the US, you should check them out. It’s a piece of art to display your Art on.

At 3 pm we headed up to the conference room for the award ceremony. No in truth, I hadn’t been nervous all weekend. I had accomplished the goals I set for myself. To reunite with old friends, to make new friends, to qualify for day 2, and to learn and be inspired. But as we sat down I did feel a bit nervous about the outcome. The award ceremony started. It was great to see young Alex Drescher win the Young talent competition. That kid has some skills. 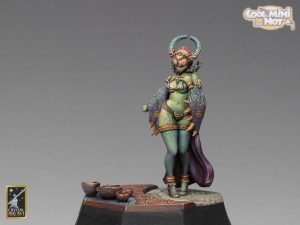 one of Kat’s gold winning entries

I got to watch my friend Kat win gold, not only for the sci fi single but also the fantasy single with 2 inspiring pieces. I then got to watch Matt DiPetro secure the gold in bust. Matt has been a mentor to me since the days I first started painting Privateer models.

It was great to see him achieve this lofty goal he set for himself. I’m pretty sure Jen deliberately tortured me by making diorama almost the last category to be announced. She stated that diorama was a very difficult category and then I saw my piece appear on the projector screen. I was in shock and awe. I never really thought it possible.

After I said my congrats and goodbyes to various friends, before beginning the drive home. I got home late that evening. Hugged my kids. Kissed my wife. And reflected on what was a truly epic weekend. As a first time Adepticon attendee I can only say wow. What an amazing experience. If you haven’t been there, you should. 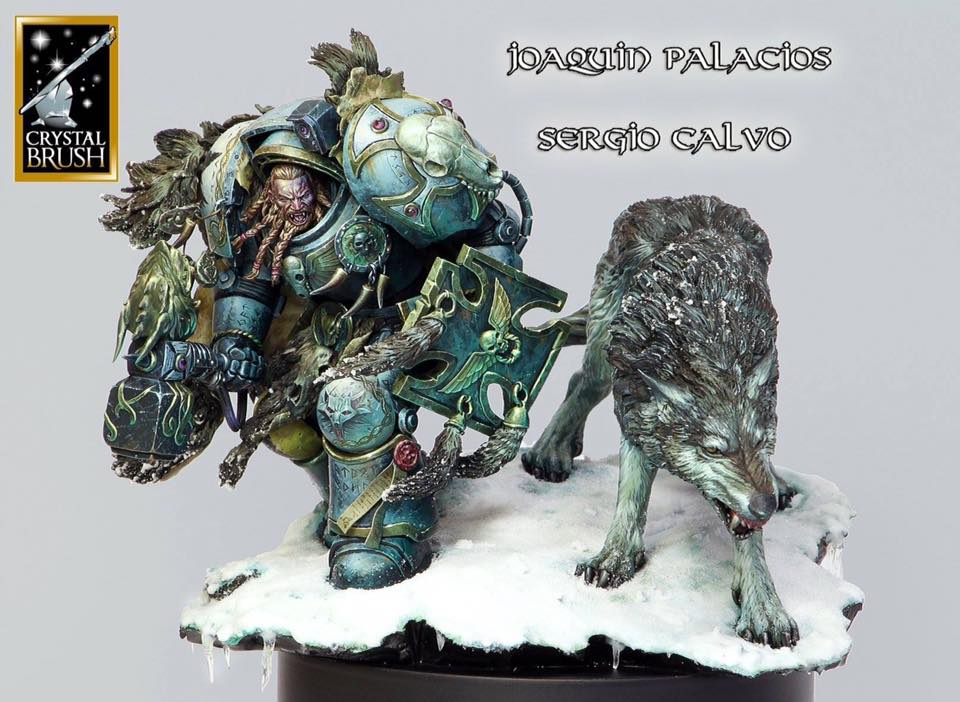 Thanks for reading my thoughts on the event and a thankyou to Jay for inviting me to write for figurementors. Stay tuned as I am now in the process of writing an article about my dragon piece for this very site. see you soon!