Hey everyone I am so excited to have convinced Thor to write for the site, he is one of my very favourite GW figure painters! We are talking about wonderfully blended, crisp, saturated colour palettes, highly detailed figures. Each and every new project he has completed in the last couple of years always makes me sit up and take notice, I have known him three or four years on Facebook and in my opinion is one of the very best nextgen figure painters.

He hails from Thailand and here he shows us how he painted this incredible yellow armour. Yellow can be a particularly difficult colour to paint well but when done properly the result can be startlingly beautiful! Check it out! (Ed.) 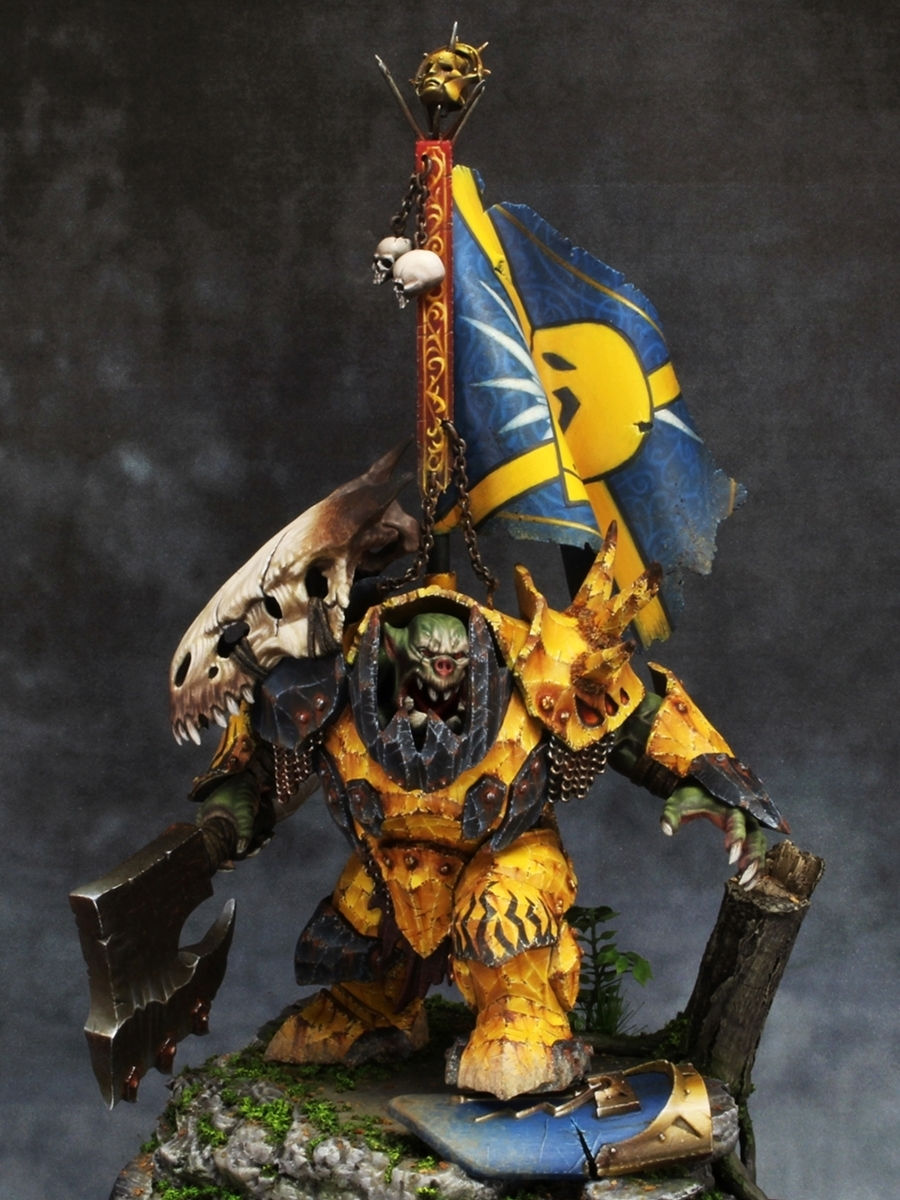 Orruk Megaboss became quite popular after it was released, there are so many great painted versions of this mini that I saw online and they inspired me to start this project. I wanted to paint him with a Yellow armour as seen on the box art but make him look different from other painted versions. Hence I decided to do some conversions and will apply heavy weathering on the armour, in order to represent the dirty and aggressive/fierce images of Orruk. 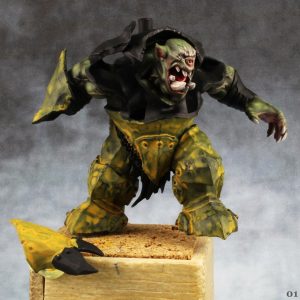 For painting this piece, I primed the whole model with Citadel Chaos Black spray paint and finished all Orruk skin areas first, because it might have been difficult to paint these areas after the body armour was assembled.

01. Yellow is one of the most difficult colours to paint in my opinion, but it might be less difficult if you paint this colour in proper way.

For painting the base colour, I used Averland Sunset (Citadel). I diluted this colour with water very well (approximately 1 part colour 2 parts water) then painted all over the armour as the first layer of base colour. 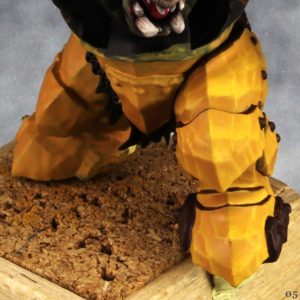 several coats for the base and start of highlights

Yellow is also quite translucent and you can not cover the whole surface with only one attempt, to paint the first thin layer will help the next paint layer to hold and cover the surface better.

02. The second layer of base colour is applied (approximately 1 part colour 1 part water). You can see it covered all the plain surfaces very well but the raised and edge areas still need more paint.

03. I painted the third layer of base colour on the right side of the leg. On the left side of the leg, it was painted with Ochre Brown (VMC) to simulate the first shadow. You can see there are some areas not well covered with Yellow, they will be covered later in the next steps. 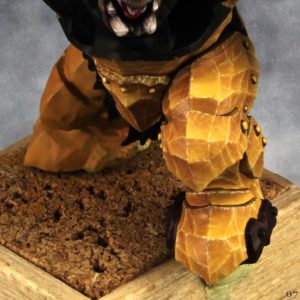 04. For the first highlight, I separated it in two parts. The left side of the leg (considered as a shadow side) I used base colour Averland Sunset for highlight.

The right side of the leg must looks brighter because it is more open towards the light, I used Averland Sunset (Citadel) mixed with Yriel Yellow (Citadel) (approximately 1:2) for highlight of this side.

DEFINING THE PLATES AND DETAILS

I started by drawing a thin line on all raised parts and edges to separate each segment of the armour. This method will help me to see the characteristics of the surface clearly and not confuse when apply shadow or highlight on each segment. 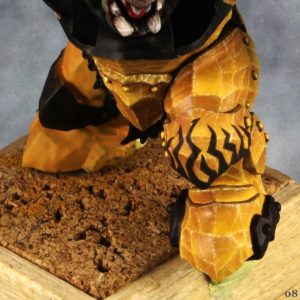 As you can see I also used the first highlight colours for each side to blend on the lower edge of each segment on their side with glazing technique.

05. I painted all armour borders and rivets with Rhinox Hide (Citadel) to aid the viewers perception that each armour segment is separated.

07. I applied the second highlight on the right side of the leg with Yriel Yellow (Citadel) mixed with Ivory (VMC) (approximately 2:1). I also used this colour with very fine paint brush to create light chips and scratches on the whole leg. 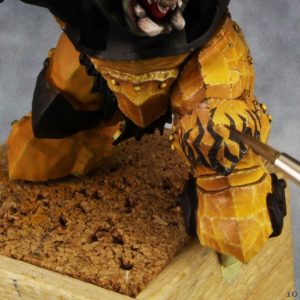 After that I added more Ivory in the mixture for a brighter shade then applied only on the right side of the leg to simulate some brighter chips and scratches.

08. I painted the flame symbol on the knee armour with Abaddon Black (Citadel). 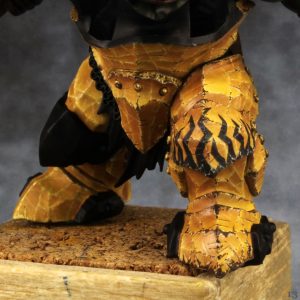 10. For the rusted chips and deep scratches, I used Chipping colour from Ammo of Mig (or you can use any Dark Brown colours for this method). I applied this colour on some previous light chips, scratches, edges, or on the exposed or heavy use areas.

I tried to paint them in smallest chips as much as possible by using very fine paint brush. Keep in mind that a small size and randomness make it looks more natural, and try not to overdo it.This process takes time and patience to finish but the result will be worth in the end.

11. I used the highlight colour from previous step and painted on the lower edge of some chips and scratches to simulate depth.

12.-14. The overall views after finished painting with acrylic on the leg.

15. In order to make the armour look dirty as it was used for some time without taking care of (as it suits with the Orruk’s image), I used oil paints from Abteilung 502: Dark Rust and Light Rust Brown; and Winsor & Newton: Raw umber, to simulate grime and rust stain on the armour. 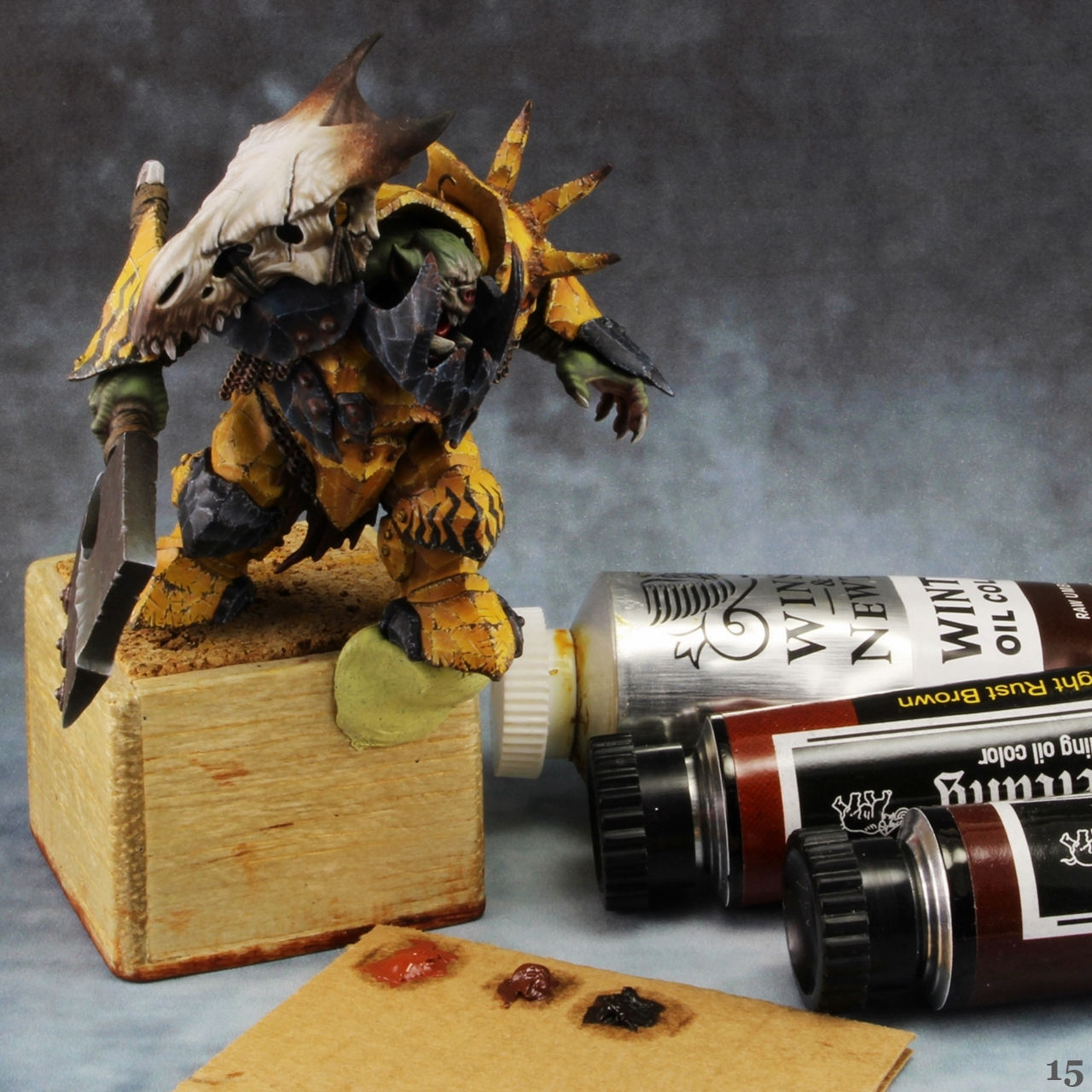 time for those oils

I put oil paints on a piece of cardboard and leave it for 15-20 minutes, in order to let the cardboard absorb the oil in the paint. It helps the oils to blend better, dry faster and to a matte finish. 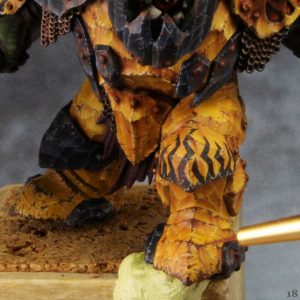 16. I used very fine paint brush to apply oil paints on some chips, scratches and around rivets with Dark Rust and Raw umber to simulate dark grime and stain. I tried to paint both colours on random spots with tiny dots or straight vertical lines. Note It is not necessary to add rust on every chips or scratches, randomness makes it look more natural.

17. I used another clean fine paint brush and dip into turpentine, then used tissue to absorb the bristles until it was almost dry (just a little damp). I then used this paint brush to soften the straight vertical lines with vertical brush strokes. 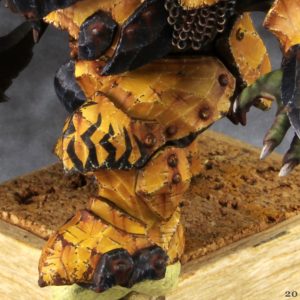 If the brush is too damp or soaked, it will wipe out the oils. With small amount of turpentine in bristles, it will soften or fade the oils, depends on your brush strokes.

18. I added the second rust colour with Light Rust Brown. I applied it on random spots with tiny dots or straight vertical lines, then I used the same method from step 17 again to soften and fade the light rust.

19. Here is the finished leg after weathering with oil paints.

20. In the gallery below you can see other angles of the finished leg. Note the difference of rust stain colours. 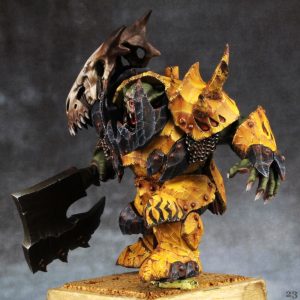 21.- 27. The finished painting on the whole armour. Note the black armour used the same method from painting to weathering.

Thank you so much to Jay Martin for this opportunity to share my tutorial on Figurementors. I hope this tutorial will be useful to you in someway. Cheers!