“Point of no Return” an insight by Pawel “Monstroys” Makuch!

“Point of no Return” – PRELUDE

I have known Pawel known for quite a few years and I am always inspired by his development as a painter and his ability to continuously create unique and interesting concepts for his projects. He wrote an article for me back when I was still with Legion of the Cow, when I saw his latest creation I knew I wanted to find out a little behind the design, so I was happy when he agreed to share some of his thoughts with us. Sadly as I had only asked about this after completing the project there is no SBS or WIP images nevertheless let’s see what we have! 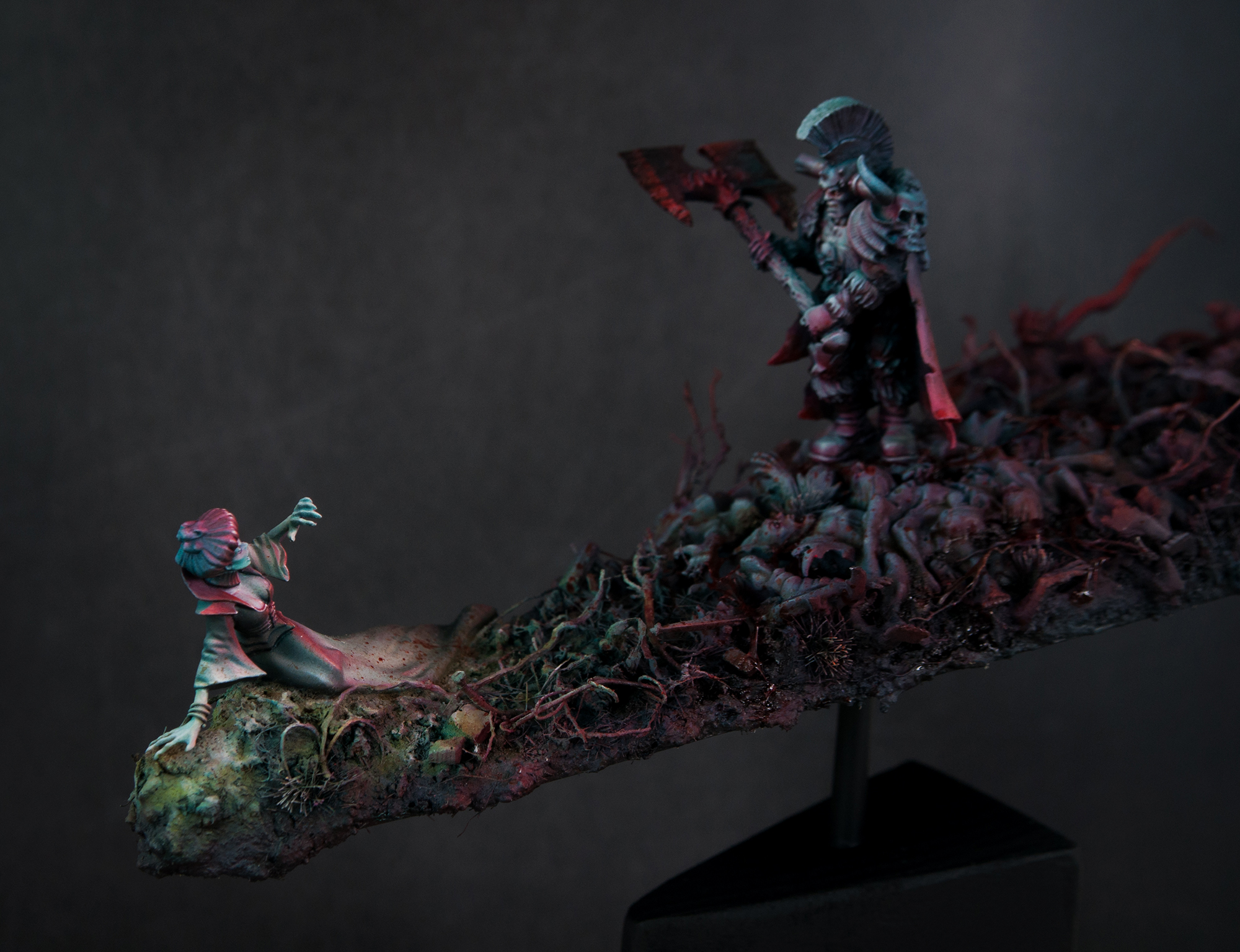 Hey Everyone! My name is Pawel or Paul and I am a figure painter from Poland. So I guess it’s time for me to write a second article for Jason and my first on his new site. I am thinking it is not an easy task to writing something smart and informative and keep everyone reading, it might be easier going back to painting – but i will try nonetheless!

So as I wrote before – it’s a second time Jason asked me to tell something about my work. I don’t have to state that it’s a big thing for me – as a painter – to be able to officially share my thoughts and ideas with others. I like to think that it means that I’m not a complete moron in what I’m doing.

Anyway – let’s go back to the topic shall we? 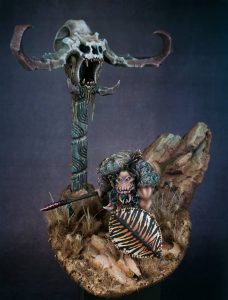 So the “Point of no Return” diorama, was unique in at least two ways than all my previous dioramas. Firstly – it was my first commissioned diorama (thanks to my customer for this project by the way!). I was hyped up about it I have to say, as I love making dioramas, and previously I had to sacrifice my working hours to make dioramas for myself from time to time.

This means I can kill two birds with one stone. I guess that adding that tiny bit of ground around the miniatures, gives me the opportunity to show what I usually can’t – a bit extra ambience.

The second thing I wanted to achieve was adding of more ambience than I previously used to. I guess I can say that I was quite happy with my previous project, called “Tribal Orc”. I have decided to work on the surroundings for quite a bit of time, and in the end I have made it stand out more than the Orc itself! It was silly, but well – I’m far from being a master, and hopefully I have learnt something from it.

So for the “Point of no return” I have decided to work on the lights, and mood, and think of the figures as the addition (or rather part of the ambience itself), not as separate elements upon a base. I know that I have made them the focal points, but is not to show the insane painting skills (joke btw), and hide the surroundings, but to add a dramatic lighting to the project. 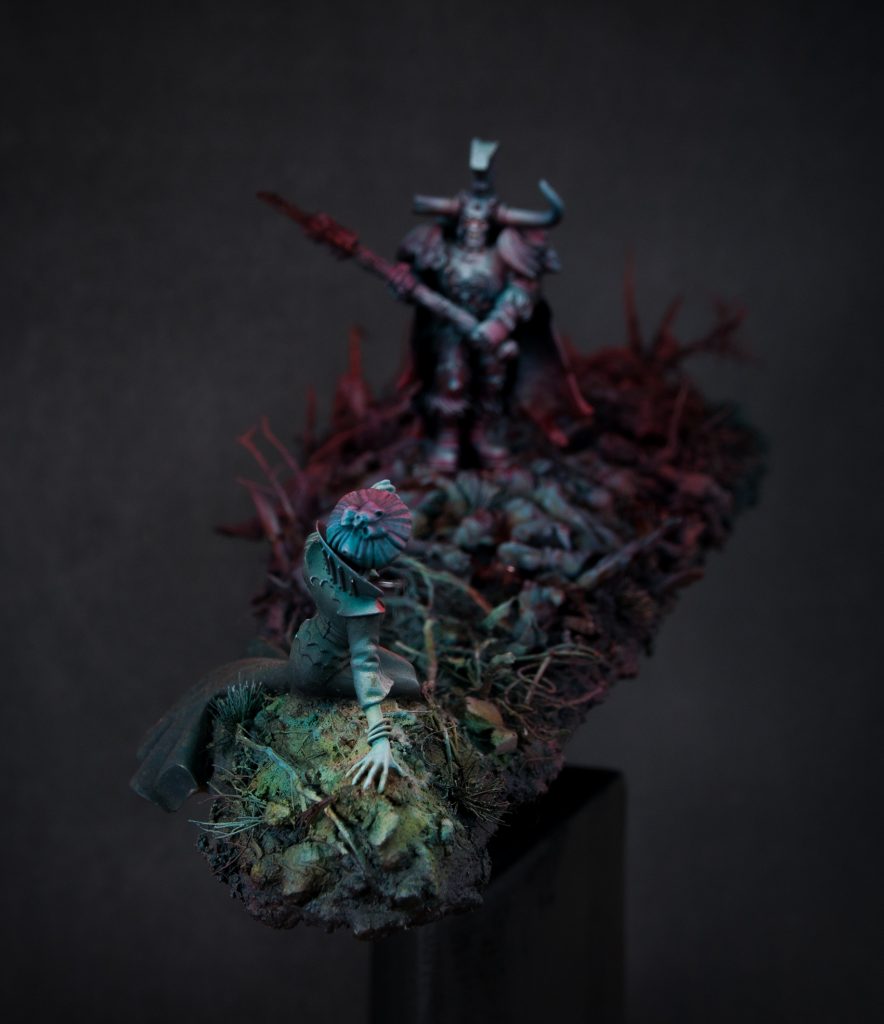 The diorama itself had a very long hatching time – like 6 months long. Well maybe it’s not THAT long, but I definitely had time to think about it and I must admit, that the longer I thought about it, the more problems I encountered. Long story short – it was supposed to look totally different (in every aspect), apart from the mood I’m talking about from couple of paragraphs now.

As I had both painted, and made some CGI before, the fact that minis don’t have that background around them, makes them a bit less real for me. I know that I can, and I do, add some paper backgrounds when I make final images, but it’s not what I’m talking about. For me a single figure on a background will be just a figure, instead of a figure with some surroundings, which could turn it into something life-like. 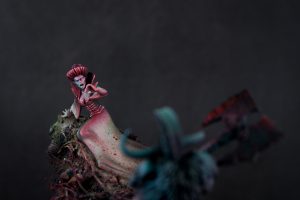 I know it’s easy to say, and harder to do. I guess I could make a single model on a 1×1 meter diorama, which would cover all the emptiness around it, and turn it into a more realistic scene. But that’s not going to happen, as it would require too much time that I could afford to a single project.

Please note – that what I’m saying is that I had problems with adding mood – not that it’s not impossible for others. I’m quite a fresh painter (although I have painted my first mini over 15 years ago), and I’m still seeking my own way, and learning new things.

I think that the most important thing for me, before starting to paint, was to stop being scared about colours, brush strokes and contrast, I decided to start creating more extreme and expressive pieces, to push myself out of my comfort zone. If I was to achieve a bit more drama, I had to do so. As usual I had some ideas what I would like to achieve. I never start a project without thinking about the end result.

Maybe some will say that I lack creativity, or that I lack spontaneity, but I couldn’t agree with that. I believe that if I will do my homework, and prepare for the project the end result will be better, and I will learn. This time I had two pictures in my mind, both were movie scenes – Klaus Kinski as “Nosferatu the Vampyre”, and the last scene from the “Blade Runner”, just before Roy Batty’s death. 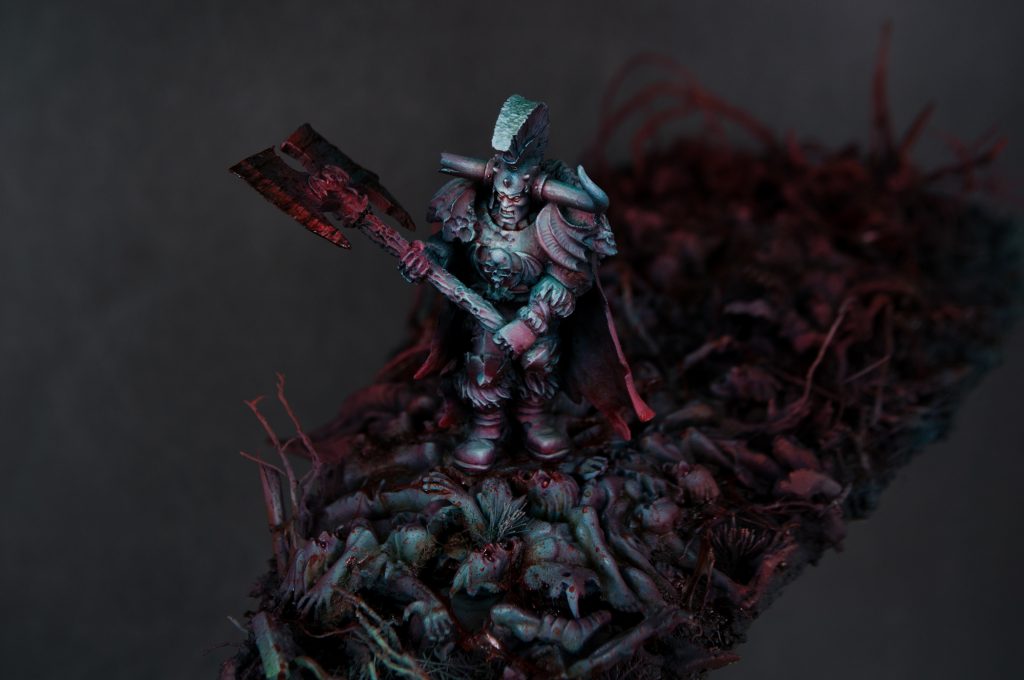 so much ambience and chilling atmosphere

As I wrote before – I have tried to strike the main characters with a bit more light, and make the female character sit in a sort of “spot” light, surrounded by the darkness. Of course? I knew I had to add that paper background, to show that contrast, but it couldn’t be helped (by the way – I have moved away from making photos on a black background in favour of greys. This way the darkest shades on the miniatures, are much more visible). 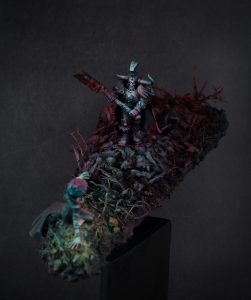 the sloping diorama adds to the tense atmosphere

Another element I have experimented with was the use a slightly tilting scene – this way, both characters were better visible over the diorama base, instead of the paper background, when I made photographs from the “ground” level, and also from a wider angle too. I have used the leaning scene on the “tribal Orc” diorama, and decided to copy that idea here as well.

I had to modify the light source a bit too. Normally I would paint it from the front, or from the side. Usually I tend to paint the back of the figures darker. If I would do that I would have to paint the female, much darker at her “face” side, which I wanted to be lit by that “spot” light.

So apart from painting the light source from the front, I have placed the second one between the two characters – it didn’t break the male model, but allowed me to paint the female much brighter, and add that spot of light, which would make her stand out more on the darker background. 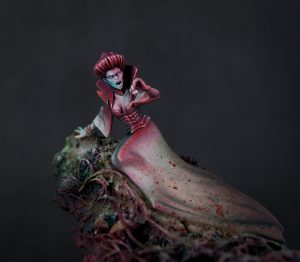 the end is nigh

The pick of colours wasn’t particularly difficult. As I wrote before – that “Blade Runner” scene had everything in it (I just love it), so I have used a similar palette. Apart from that I wanted to show a bit of the “real” ground, where the female is located. So that evil warrior, is a bringer of all the evil (obviously), blood, and darkness, which will cover all the scene, if he decides to cut down the female, after killing many men.

So I guess that’s it. I don’t know if I have managed to fully achieve the desired effect but i did my best for sure. I guess that every project can be improved, and would look better if painted again. Looking at this piece now I know that what I haven’t done, was to add shadows to the ground, those cast by the central characters.

I haven’t done it on purpose – I don’t think that I’m ready to do so on such a detailed ground (by detailed I mean with such an amount of models). Also – with all honesty, I don’t know if it would help, instead of making the scene overcrowded with effects. 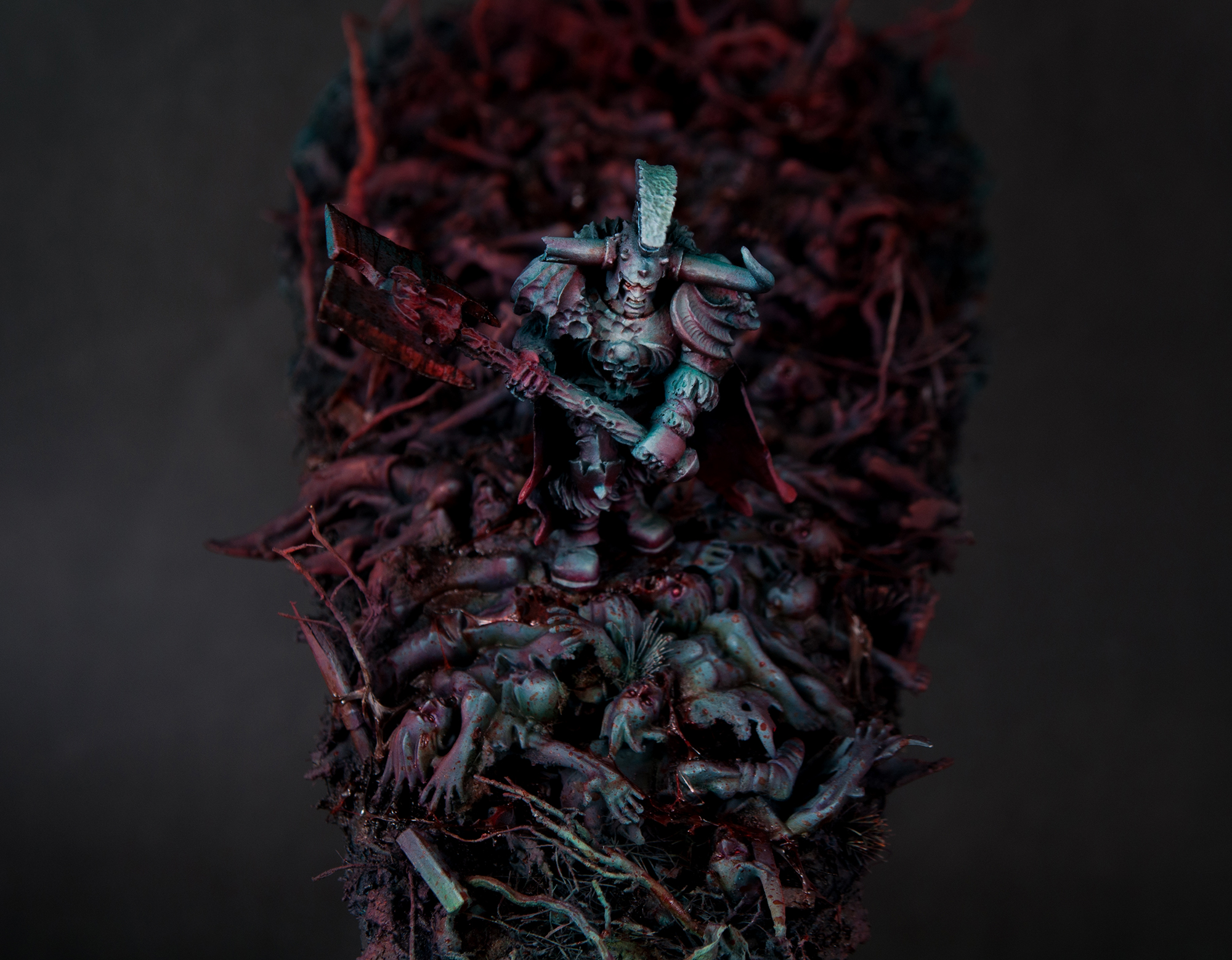 Take care everyone! Hope that You have enjoyed the read!
Paul “Monstroys” Makuch