Painting the Butcher by Macca Chung

Hello! Macca here and I am very happy to be contributing an article, I am a figure painter from Melbourne and I hope you enjoy this my first article for figurementors!

The Butcher bust from Spawning Pool Studios was a lot of fun to paint. I thought of doing a step-by-step, but frankly, there is little to my technique. So I decided to focus on my thought process instead and keep the technical part brief (sort of). 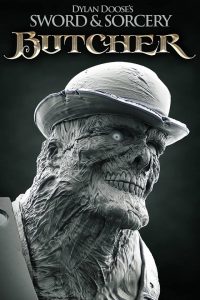 My outlook on painting this kit was that less is more. I try for the shortest distance possible between my brain and figure. The less I have to think about the tools, the nearer I am to the piece. Make the tools invisible, so to speak. More metaphors!

Currently, I use Derivan Matisse artist acrylics in primary colours. Painting with primaries is not a new thing. I tried it for the first time last year and I was hooked instantly! It feels very pure and I would recommend it. Finding the right paint for my style has really also freed me to just focus on the art. Although everybody has different preferences, I love the Derivan paints for their flat finish and predictable mixing.

For The Butcher, my palette consisted of a warm yellow, warm red, cool red, cool blue, black, and white. The idea of a warm or cool primary is relative. The important thing is to know the bias and character of the paints that are physically in front of you, rather than to try and think of “colour” in the abstract. This is much easier with a limited palette.

I paint everything with a W&N Series 7 brush in size 1 or 2. And of course, my beloved wet palette! 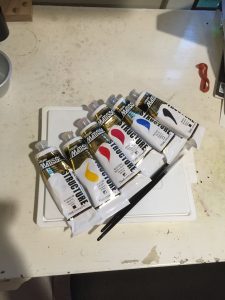 The way I lay down paint is very basic. I do something similar to a watercolour technique, which is to say I build up many translucent layers or glazes over plain white primer. This takes advantage of light reflected by the white base through the hue layers, for a more luminous look. I use the same technique for base colours, shadows, or highlights. It is not a very efficient way of painting by any means. In fact, it is darn slow. But I am not in any great rush.

If I have any freehand elements, or if I need areas of more powerful colour, then I might use more opaque layers. I still use high chroma colours, just more conservatively. My aesthetic leans towards a softer look I am told, by me.

A WORD ON SMOOTHNESS

There has been a lot of debate recently over smoothness. When I first heard about #fucksmoothness, it blew my mind. It was almost enough for me to give up on the art altogether because it led me to ask why I do certain things, how I view a piece, and my ideas of what miniature art should be. Yet I realised, like many others, that to take a side on the debate is really to miss the point. I am sincerely grateful to Alfonso Giraldes for having stoked the fire on the issue, because it has made me think and question every choice I make. Which is a good thing. Thank you Alfonso!

Butcher is a character from Catacombs of Time, a novella by Dylan Doose. If you are looking for a fantastic read, you can get it and more of Dylan’s work at: https://www.dylandooseauthor.com

The sculpt by Sheridan Doose is amazing. I wanted the painting to live up to the quality of the sculpt and stay true to the character. So I kept this description from Dylan’s novella in my mind always as a reference:

“From the shadows stepped forth a thing that had once been a man, and before that a boy. Butcher was six and a half feet tall, pale as the fog that levitated around his mutant muscled form. His veins bulged beneath his scarred skin, and his face was a thing of nightmares. His nose, his ears, his lips, and the skin of his face had been flayed off him as a boy. He’d survived. The result was the visage of death, a living skull.

Butcher smiled. He somehow had each and every one of his teeth, and they were straight and white. Animal white.”

This could have translated to a visual concept in many ways. To me, it spoke of something very human beneath something grotesque. Also, he should be beyond comprehension, but only just. As a painting concept, I thought the best way to sell this dichotomy was to impose soft transitions over his menacing form.

The next thing I did was to collect a bunch of mood images. Probably obvious, but I am a massive fan of Simon Bisley, so he always makes an appearance. Other 2D artists that I love include Bastien Lecouffe Deharme and Roberto Ferri for colour, and Baroque painters for chiaroscuro and the way they use value. I also collected a bunch of reference images for materials, such as clothing, metal surfaces, etc. Then I spent a few weeks looking and examining all my reference images before painting. Immersion is very important for me. This is probably why I tend to work on only one piece at a time.

My last step before painting was to take a bunch of photos of the bust with directional lighting to use as a relative value reference. The effect is similar to using zenithal or two-tone priming as a reference. The bust is already primed white in the photos below. 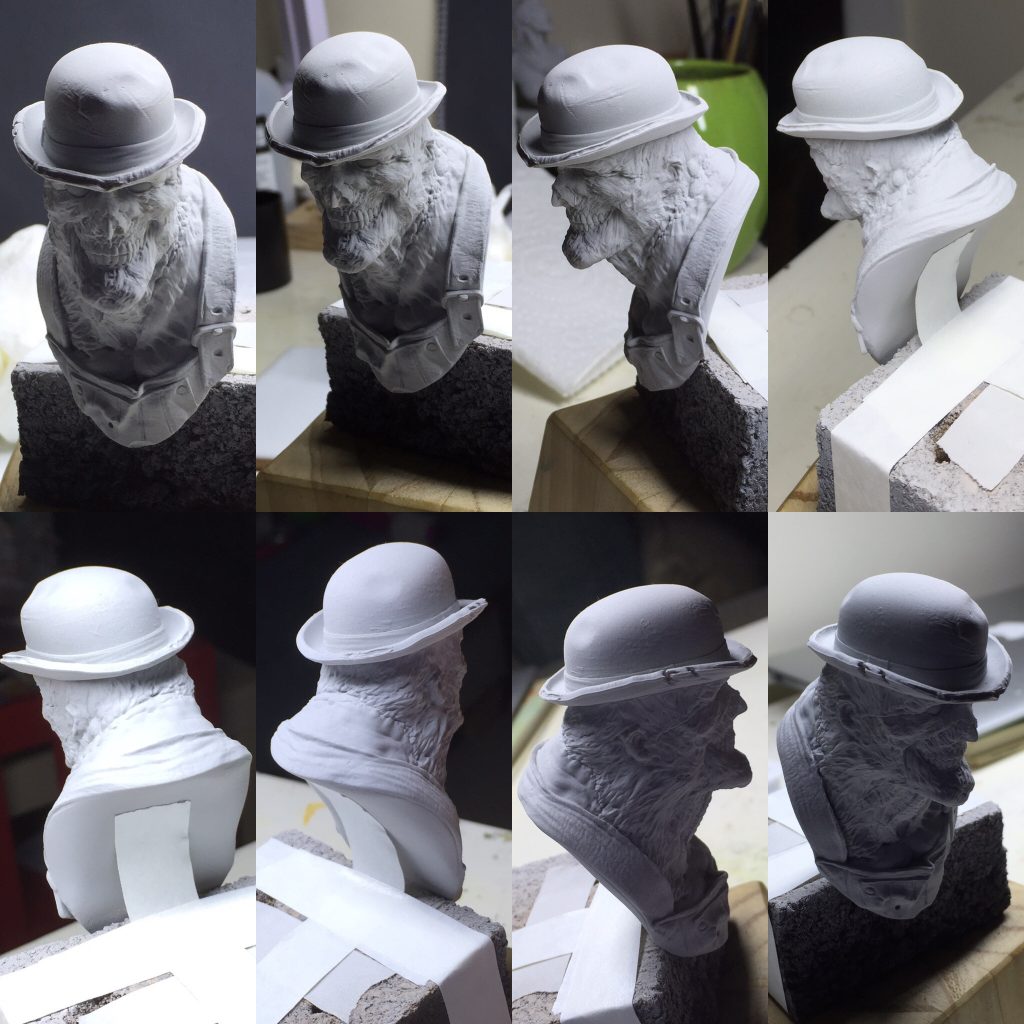 reference of the light value

My painting process is quite standard or traditional, with base colours, shadows, and highlights.

I start by laying in the base colours over the white primer. In the pictures below, the skin is base colours only. Again, this was done with several translucent layers. But you can see that I start placing my final hues and transitions even at this early stage. Doing it this way helps me to keep the overall picture always in mind. In terms of placement for Butcher, I wanted the most intense colours to be on the face. The left eye was painted early on to be used as a value reference.

The next step was to work highlights into the flesh. Having the colour transitions already laid with the translucent base colours makes this part much easier. I am also keeping in mind that the face is not going to have the highest value, which I am reserving for the cleaver. So I mostly avoided using pure white here. I took the same overall approach to the apron and the hand.

The cleaver tends to be the thing most people notice about this piece. But it is also the simplest part.

Unfortunately, I have no real WIP images as it was actually done quite quickly. I will try to explain the process as best as I can. I should mention here that the reason I prefer NMM, is because I do not own any metallic paints and if I did, I would have no idea how to use them!

I looked at a lot of reference images of cleavers and knives to get a feel for two things. The first was the value transitions across the metal surface. In simplest terms, for each flat plane, there was a gradual transition from dark to light. This tends to be a staple of basic NMM approaches. On this occasion, Butcher’s cleaver has essentially two planes (main surface and along the blade’s edge).

With that in mind, I had a third and most important decision to make: did I want to achieve a realistic metal surface, or a stylised one that would not be very realistic? The reality (no pun intended) is that reality does not always lend itself to beauty or an emotional response. In other words, sometimes you have to make something look prettier, at the expense of accuracy.

In the end, everyone can see the object is a cleaver no-matter how it is painted. This really gives the painter the freedom to push and pull certain characteristics without breaking the suspension of disbelief. So I made the decision to exaggerate the darkest value to black, and the lightest value to pure white. To enhance the lightest value, I also lightened the area around it for that glare effect. But if you were to look closely, there is no way that a real cleaver or metal surface would react to light that way.

In terms of the physical painting, I used the same glazing technique I use for most things. I started with translucent layers of a warm grey base colour. Then I glazed in the shadows, adding more and more black and red, until pure black. I then did the same with glazing into the lighter area, adding more and more white and blue, until pure white. The reason for adding more red to the shadows and blue to the lights, was to exaggerate the transition even more by having warm darks, but cool bright peaks. As you add black or white, you are also reducing the chroma in the paint. So adding a little of the pure colour helps to counteract this effect.

The edge highlight is again something that is more for aesthetic purposes. It would look odd if it wasn’t there, but it isn’t something that would exist so prominently on a real object.

The reflection onto the dark side of the face is self-explanatory. But it is another example of sidestepping reality. The break up of light into its spectrum colours on the jaw is unlikely to occur that way normally. 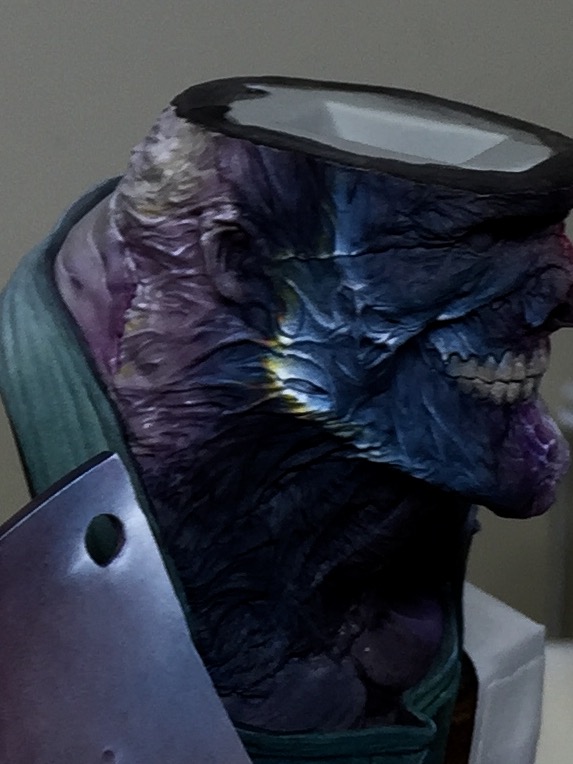 THE REFLECTION TO THE JAW

OUT OF THE VACUUM

Once I finished the hat, I decided I was mostly done and would leave him for a week or two before final touches. I have one or two people that I go to for feedback because they are brutally honest. Taking a break also gives me time to absorb their comments, which I find are invaluable. 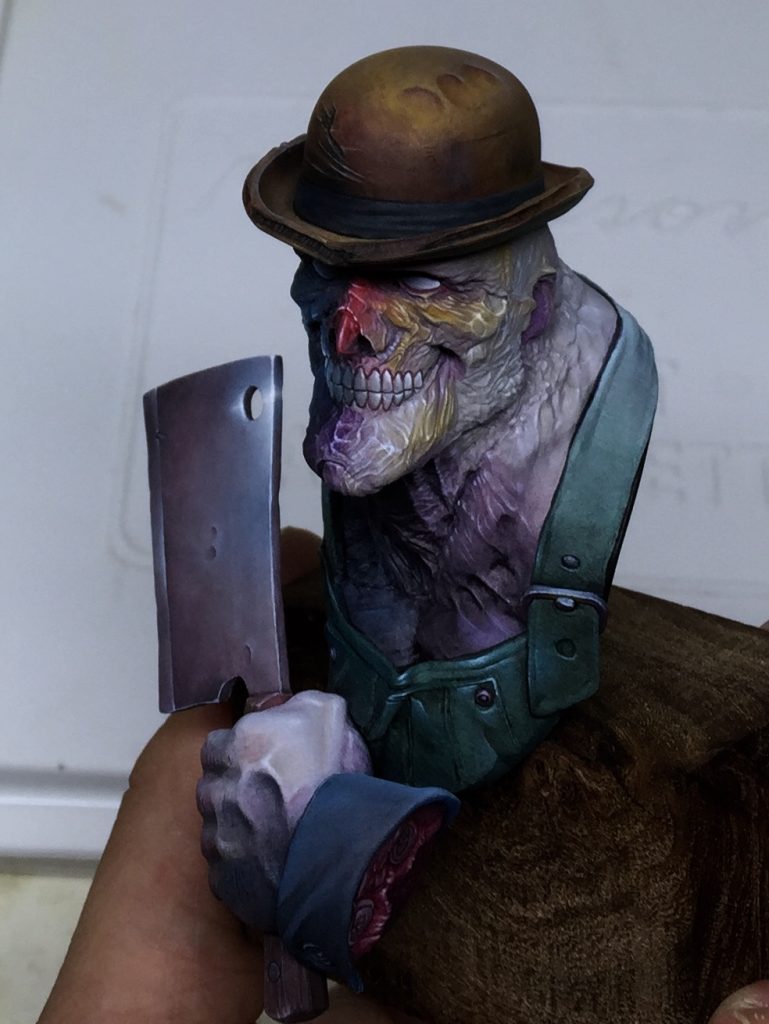 The main things I did before calling it finished, were to push the brightness in the cleaver values. I also pushed the colour intensities a lot more on the cleaver to harmonise it with the rest of the piece.

I learnt a lot from painting Butcher. It was the first time in a long while that I found it hard to tear myself away from the painting desk. So for me, it is a happy way to kick off the painting year. Moving forward I want to push myself further with the idea of exaggerating light and colour. And Bisley, much much more looking at Bisley!

I hope you have found this an interesting read and thankyou for taking time out of your day to read my musings. I also want to thank Jay, I firmly believe in what he is trying to do for the community via this blog and it is an honour to contribute something! Enjoy the gallery of the finished pictures!