Painting Marble Effect for your Scenic Bases by Leonardo Archini

Painting a Marble Effect – A Madness I Tell You!

Hi, my name is Leonardo Archini and when Jay asked if I would like to contribute a tutorial regarding my marble process I naturally jumped at the chance! When I was painting a little diorama, set inside an old laboratory, I had to choose what kind of floor it could be inside this room. I thought about an operating room or surgery, so I chose to realise a marble floor. Next conseguent question was: “what kind of marble? ” and after a deep search on web about this stone, I discovered a universe of different kinds, colours and shapes of marble. Herein follows my tutorial on Painting Marble Effect for your scenic bases! 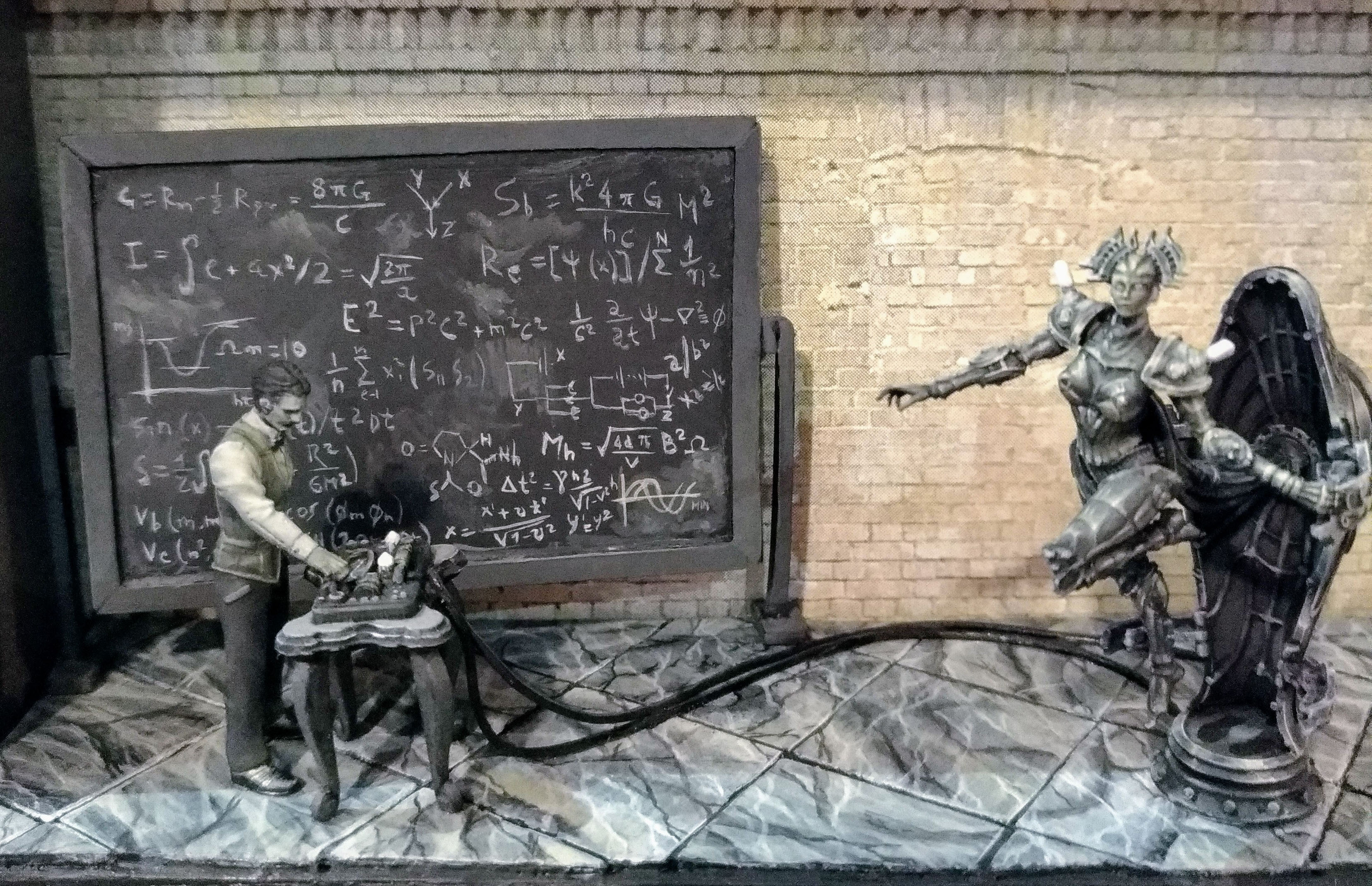 The subject is very complex due to the many variations, so I had to experiment.

I implemented three varieties of marble so I wrote down the steps I used to achieve them.

First important rule to know when painting something realistic is to “have a real reference”, so I searched photos of real marble tiles and tried to follow them.

Second rule for marble is searching for randomness. Every tile is different, every shape has no logic, moving lines are rining dots contributes to chaos and mess. It’s definitely fun to obtain!

First marble I tried to replicate is Emperador Grey Marble, a kind of grey marble with dark shapes and white lightning-style lines. I found that it fits well in my black/white diorama.

The colours I used are: Scale75 White and Scale75 Black, adding a Scale75 Birch and a Jo Sonja Turners Yellow because I decided to apply a sort of sepia glaze upon it, like an old photo.

Winsor & Newton series 7 n.1 and sereies 7 miniatures n.00 are the weapons to execute this technique.

Primer was a Tamiya Grey spray.

I started with a mix of Sc75 Birch (70%) with Sc75 Black (30%) and I cover my tiles with this mixture, moving my brushstrokes in different direction for every tile. Those tiles are supposed to be various cuts assembled together and not a single marble surface, so I wanted no continuity between one tile and the next. It’s not important to obtain a good blending, because every shape naturally formed with brush, contributes to create that randomness I was looking for. (Step 1).

I added more Black to the mixture (50% and 50% Birch) to paint dark shapes, and I used pure Birch for other light shapes. In this step I wet-blended those two colors (light one and dark one) with original base colours to integrate with the first layer. I worked with colours still wet, to quickly mix them. Because I still didn’t want a perfect blend, but randomness once again. Notice that every shape was wet-blended only on one side, leaving a marked line on the other. (Step 2). Those steps are made with brush n.1.

After creating the main shapes, I used brush n.00 to paint some “lightning” lines/strikes with pure Birch colour. No logic again, only a trembling hand and thin lines. You can see that some lines are crossing bigger shapes, and other lines follow shape borders (Step 3).

I covered almost all of the tiles with a glaze of pure Birch, further diluted (70% water) to brighten the light areas. I repeated lightning-lines operation with Black (never pure but with a pinch of Birch). This time I went for less and more subtle lines, because I didn’t want to darken it too much. (Step 4).

Paintjob was almost finished. Some lines could be more convincing than others, so you can decide to keep or cover following your taste. Next step was to enforce light lines with pure White. (Step 5).

Final touch was given with a glaze (70% water) of Birch + Jo Sonja Turners Yellow over the white lines, avoiding darker areas. This final step helps to add a new tone (if you want it) and to smooth all of the previous line work. This helps to integrate these lines “inside” the floor, as they are actually under the  surface.

To complete this process, I painted a dark line between every tile and I added a pure White line along one edge of all tiles. Same edge for tile. It helps to perceive three-dimensionality. (Step 6)

I wanted a second more coloured marble, so I went for a green version, more dotted and chaotic than the previous one. I used Scale75 Birch, Scale75 White and Liquitex Muted Green, a sort of petrol blueish green. Tools are the same old W&N n.1 and n.00 miniature plus a new entry made by me: a chinese chopstick with a ball of bluetac on top to stick a piece of sponge, used for stippling and dotting.

Primer was a Tamiya Grey spray.

Again I started with a mix of Birch (70%) and Green (30%, it depends on how dark you want your green), painting every tile with a different movement of strokes. Sometimes paint was more diluted, resulting more transparent, some other it covers more. It’s all a matter of random application, again! (step 1).

Again I created bigger shapes with a darker mix (50% Green and 50% Birch) and other shapes, more thin (but not lines yet), with 90% Birch. Again I wet-blended some sides of these shapes with base colour. On this marble I added a lot of irregular dots and little shapes. This marble should result in much more variation to the colour and pattern. (Step 2).

Now it’s time for “lightning” lines. This time I painted a lot of thin lines with pure Birch, some more visible and long, others less visible using diluted colour. (step 3).

Stippling time: this is a new step, not applied on previous marble. I used a piece of sponge stained with Birch paint, to stamp groups of thin clear dots on most sections of the individual tiles.(Step 4).

After the stippling phase, I applied pure White lines inside clear shapes and glazed all light parts with Birch (diluted 70% with water) to smooth it and integrate the various lines. I also glazed darker parts with pure Green, to use satin/gloss finish of Liquitex colour to enhance the depth of the darker sections. (Step 5).

I wanted a lot of dots, so in the very last step I added another application of stippling of pure Green over the white lines and to regain of some lines that I have lost with Green glaze. Again I’ve put a line of pure Birch along the same edge of every tile, for three-dimensionality. (Step 6).

For my third version, I chose a marble with less dark-light variation, but with more colour changes. This marble has various shapes in different tones of pink, red and orange, a lot of dots and many lines that crossed in each others path in almost perpendicular way.

I painted tiles with a base tone composed with different colours.

My starting base tone was Birch+Salmon (70% Salmon) to which I added a touch of Red for some zones, and a touch of Orange for others. (Step 1).

Like previous marbles, I painted different shapes, adding more Orange or Red (sometimes a mix of both) to the base tone. I understand that it could be not schematic and difficult to describe, but, again, it’s all randomness and feelings.

Technique was the same as previously described , shapes were wet-blended on one side, maintaining a strong line on the other. I added some shapes with a lighter colour (60% Birch, 40% Salmon), following those strong lines, to add contrasts. (Step 2).

Following the same scheme, I added lightning-lines with pure Birch. According to reference photo, I made a lot of lines crossing each other and some lines that follow the bigger shapes. I added also some dark lines, made with Orange + Red. (Step 3).

As a final touch I sponged a little, with pure Birch, only on red and orange shapes, and strenghtened lines with pure White. At the end I realised that it came out too reddish, so I added a lot of glazes of pure Birch (a minimum of 4 glazes) over all of the tiles, to clear all surface and soften all of that red/orange tone. Final result is something similar to boiled ham, but I think it could work. (Step 4).

I hope this SBS could be useful, and I encourage to try to obtain different surfaces, because nothing is right or wrong with marble. It’s all a matter of randomness!