WOW! Dumah, what a stunner!

That’s what I thought when I saw this release, Dumah bust by Kimera, at their stand at Euro last year, then it was “I got to have it”! This was quickly followed by the dawning realisation that my wife was going to kill me for going over my budget yet again. But in true manly fashion I bravely bought it…..and flowers and dinner reservation for the Mrs plus practicing saying in sotto voice “it was only fifty quid darling.” That bravely sorted I unwrapped it at home and started painting my favourite bust ever. 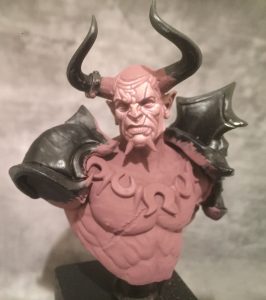 Skin tone work on the face

ASSEMBLY, BASE COATING AND SKIN

There is a great finish to Dumah, no defects or flash at all to remove and it took literally minutes to assemble. You pay, you get quality.  The sculpt offered an array of painting techniques as it was superbly detailed but not overly fussy.  Plus it had large spaces for freehand, which I had been itching to take to a new level.

So, starting on the skin, I took a leaf out of David Soper’s pallet choice and went for a de-saturated purple tone as the base colour. This was produced with equal mix of Vallejo red leather and Vallejo neutral grey. Then working up the tones with small increments of Vallejo off white and then Vallejo pure white. 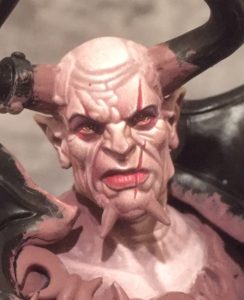 With the volumes of the skin sorted, it was onto the eyes of Dumah which demanded a charismatic stare and a touch of the infernal. Eyes are hard to do, “no sh*t Sherlock” I hear you say, but there are certain tricks to be used to make life easier for yourself. Firstly, the eyeball is never white, it’s always an off white/skin tone colour with red towards the edges. The iris is a very de-saturated black/red. Start with a dot central and then work out and remember, unless the subject is really shocked, you will have part of the circular iris covered by the top and bottom eyelid. Then, leaving a dark ridge around the outside of the iris, paint two thirds of the circle with a red, then the top third an orange, and then slightly off to the left hand side a bright yellow/orange. 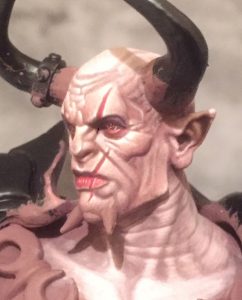 This done, place a central black pupil and the glints pure white at two o’clock and eight o’clock. The paints used here where GW evil sunz scarlet and then Vallejo yellow.

Finishing the eyes involved framing the socket with a glaze of purple and red and then re-touching the top of the bottom eyelid with a light tone of the previous skin colour where it catches the light.

The horns are transitioned from the skin colour up to pure black (a lot of back and forth here with wet blending, feathering, spit, shouting etc.) then quite sharp highlights on the creases as horn is a shiny material.

The glazing was quite a laborious process with several very thin glazes of GW scab red. This added more vibrancy to the de-saturated purple base coat and help emphasise the volumes by placing more in the recesses (e.g. the cheekbones). In the deepest recesses a thin dark purple glaze was used to really up the contrast. 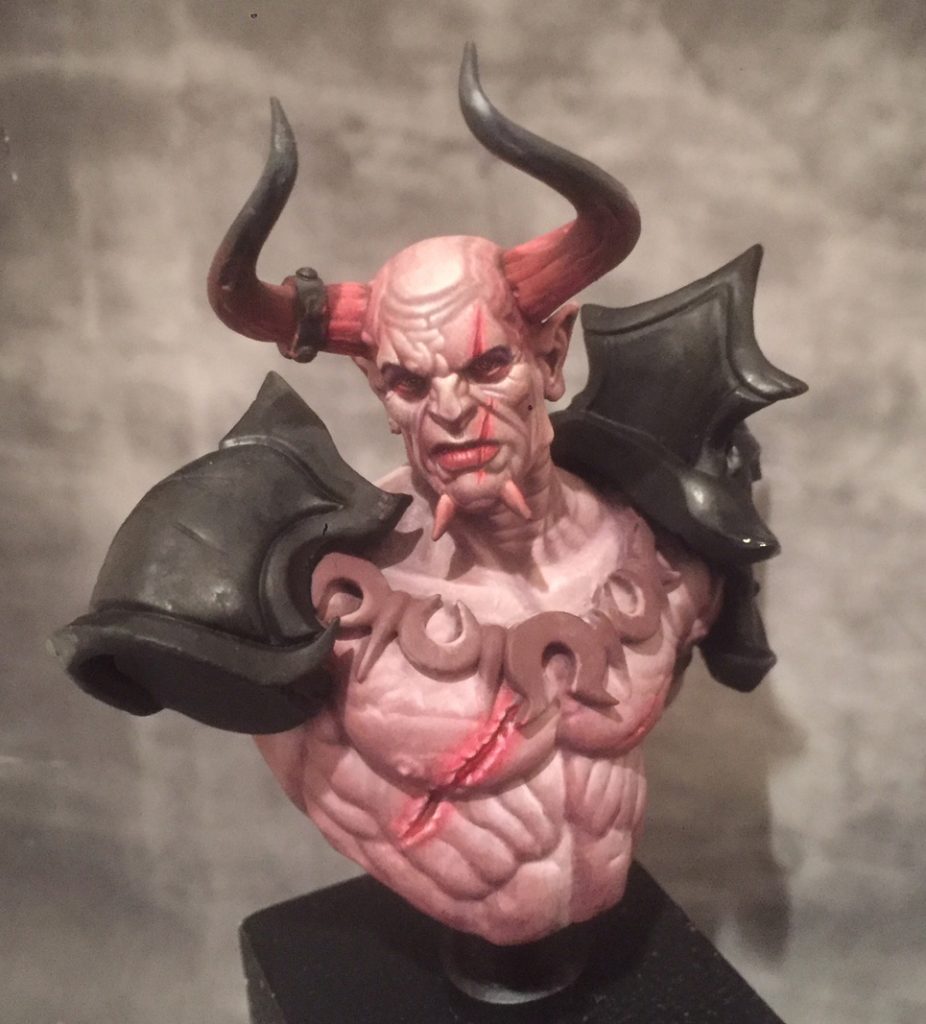 Work on the horns and glazes to the skin 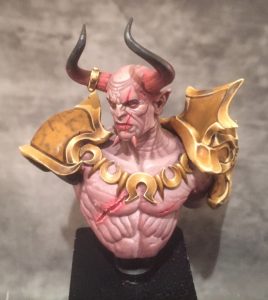 My standard gold NMM mix was used here of GW snake brown toned up with pure white and Vallejo Air brown thin glaze between the darker transitions.  Check out my previous tutorials for more information on my NMM approach and the gold NMM mix. The free-handed magic symbols were undercut with a dark brown to give the illusion of depth.

This was the main new area for me, as I really wanted to do a good bash at free hand. I decided to go for a muted brown medieval style colour selection, so muted browns and blacks and highlighted up with white. The subject was very inspired by Cthulhu mythos. Here it was more of a stippling approach, working up from a very dark to light with a scribbly action of the brush. This allowed for a great emphasis on depth.

It was a bit of a journey and a few changes were made on the shoulder pads. But I think it improved with the change of the left shoulder pad.

General tidy up and then here’s the finished piece. 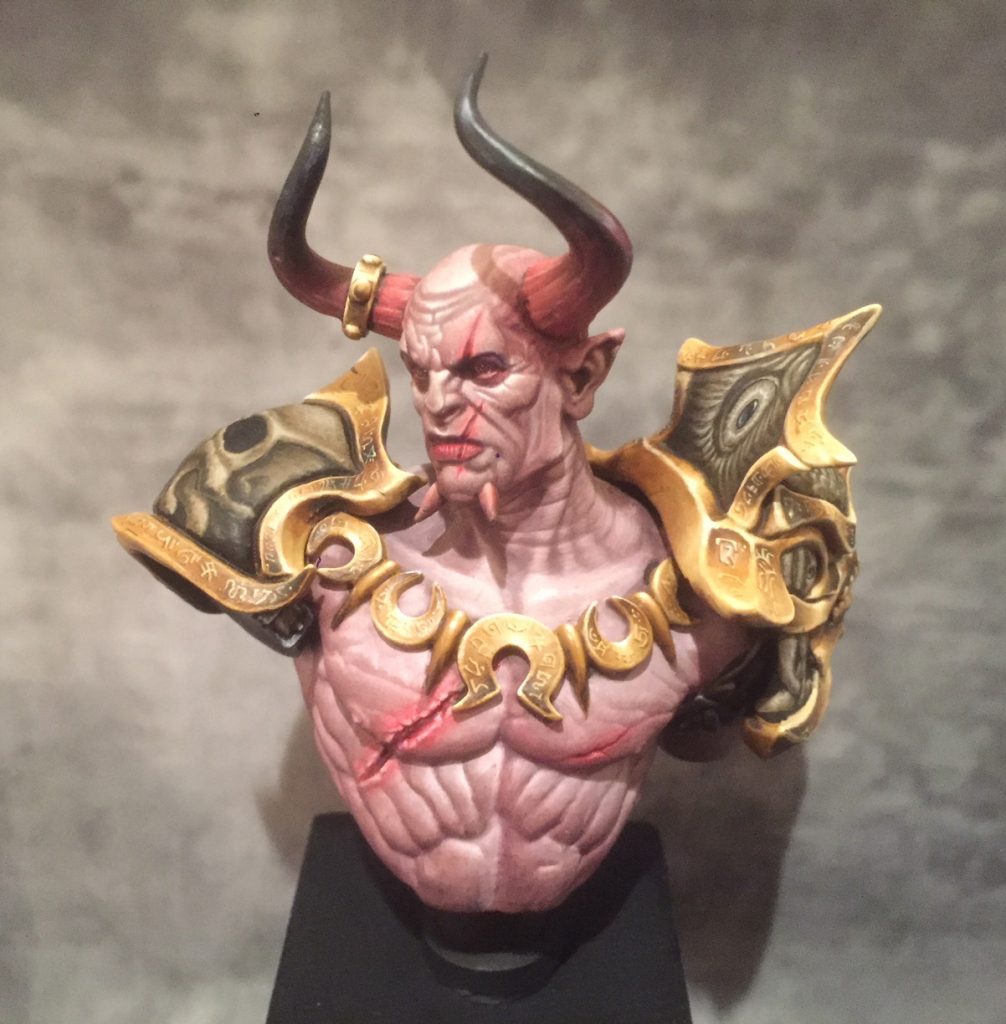 I strongly recommend this bust and the associated 75 mm figure that goes with it, which is on my painting desk (aka the downstairs toilet)!

We’d like to thank Andy for contributing this article to FigureMentors. We hope you enjoyed reading it as much as we did. To see more of Andy’s work, check out his work in progress posts here and his finished work here. (Ed).