The Legend of Hiroki by David Batista

The Legend of Hiroki – the PRELUDE

Hello my friends and fellow figure painters, I present myself first of all; my name is David Batista, I’m from Spain, and I’ve been painting miniatures for about 3 years, I wanted to show you my work on Legend of Hiroki. I mainly painted fantasy in 28mm, although I have recently decided to try to learn how to paint realistic (historical) figures. The following is not an exhaustive account, it is my first article and so I have much to learn but I still hope you find it nice to read and maybe it gives you an idea for the next project!

I write these lines to show you a project I did some time ago, it’s a Samurai of Tale of War in 28mm (Hiroki) and his reflection in the water. The truth is that since I had the idea I did not think it would look good until the moment of the photo, maybe if I had taken it more seriously from the beginning the result would improve, but that happens with each figure, you always see things to improve. 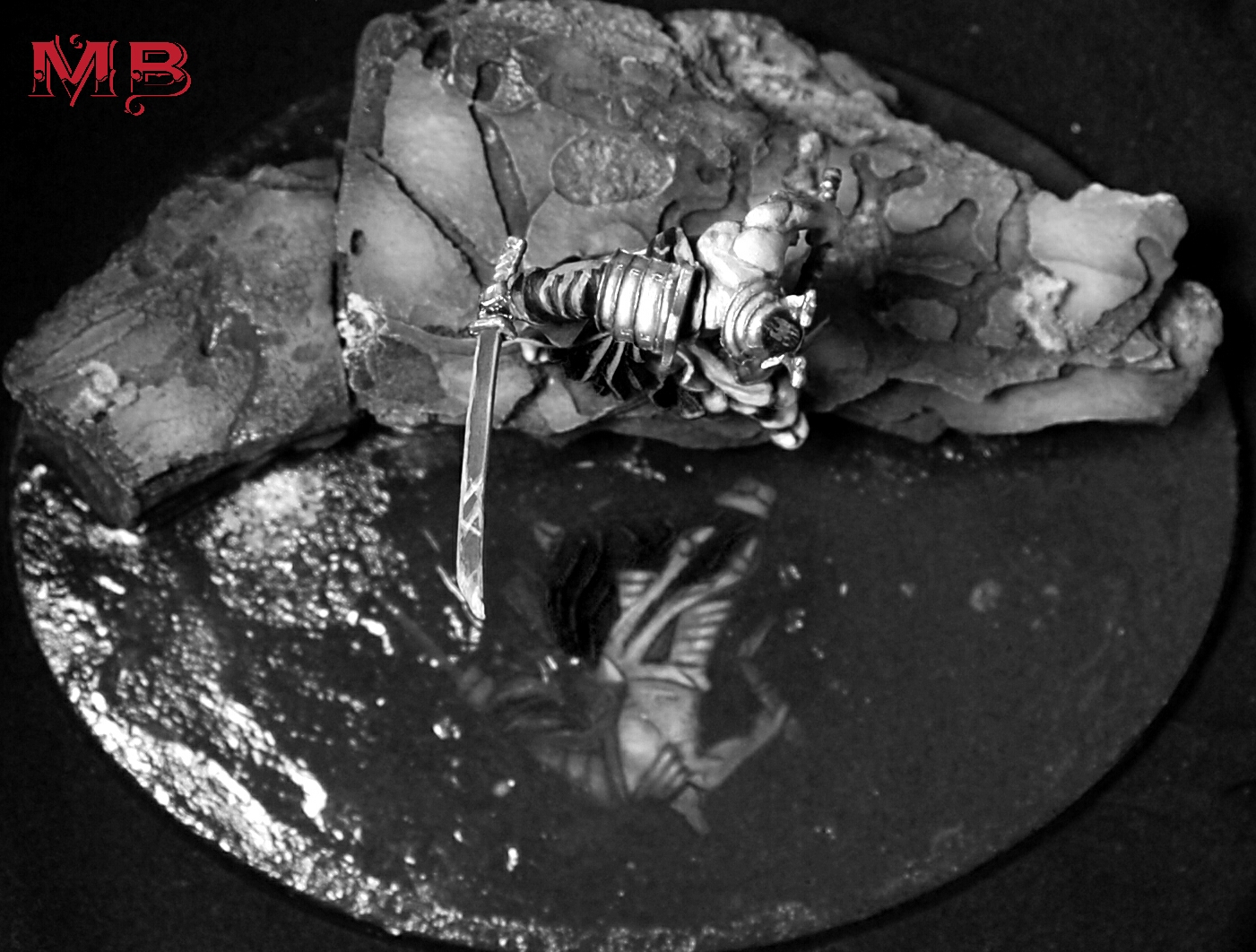 INSPIRATION: The Legend of Hiroki by David Batista

Even today, in the coastal villages of Japan, the Legend of Hiroki talks of a skillful samurai with sword and fearsome in hand to hand combat, characterised by being a solitary man, alienated from all despite the wealth he coveted. He needed no more company than his sword and the full moon, with which he formed an invincible trio. Yet something had changed in Hiroki, he met a young woman from a fishing village, her name was Mitsuki (moonlight), and she could be seen staring at the stars, the light she lacked in dark nights, her headlight, her guide… . Soon her former companion, the Full Moon, who was in love with Hiroki’s reflection in the water, felt struck by Mitsuki. What light does that mortal give you that I do not give you, he said, to such an extent was his jealousy that it caused a great and sudden tide that made the ship of Mitsuki sink, disappearing this at sea together with the son of Hiroki still in her belly. From that day on, Hiroki wanders along the coast looking for Mitsuki among the waves, while mumbling disjointed words in which he seems to challenge the moon … while the Moon waits patiently for each lunar cycle, to see the reflection of Hiroki’s in the water. 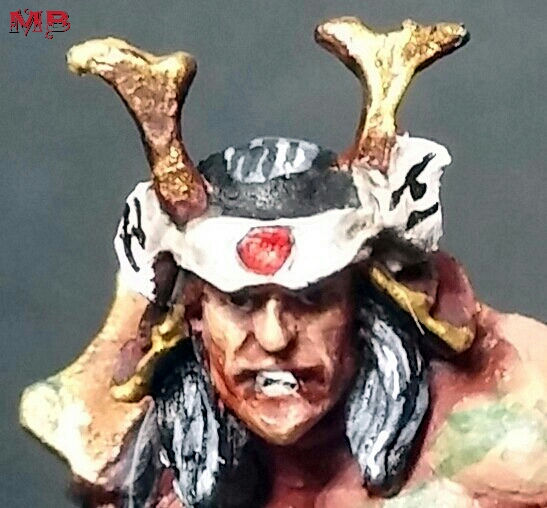 FREEHAND in the water

The reflection of Hiroki in the water had to be drawn directly to the surface but since I was a little boy I’m sure that drawing is not my thing and I was worried about the proportions. I did not want to draw just from my imagination and I looked for a inspiration on the internet, I found a suitable image and I edited it on Paint and amended the size I needed and with that managed, I have the outline of the drawing, the interior lines I could do without problems. Once this was done I coloured it as if it were a flat figure. 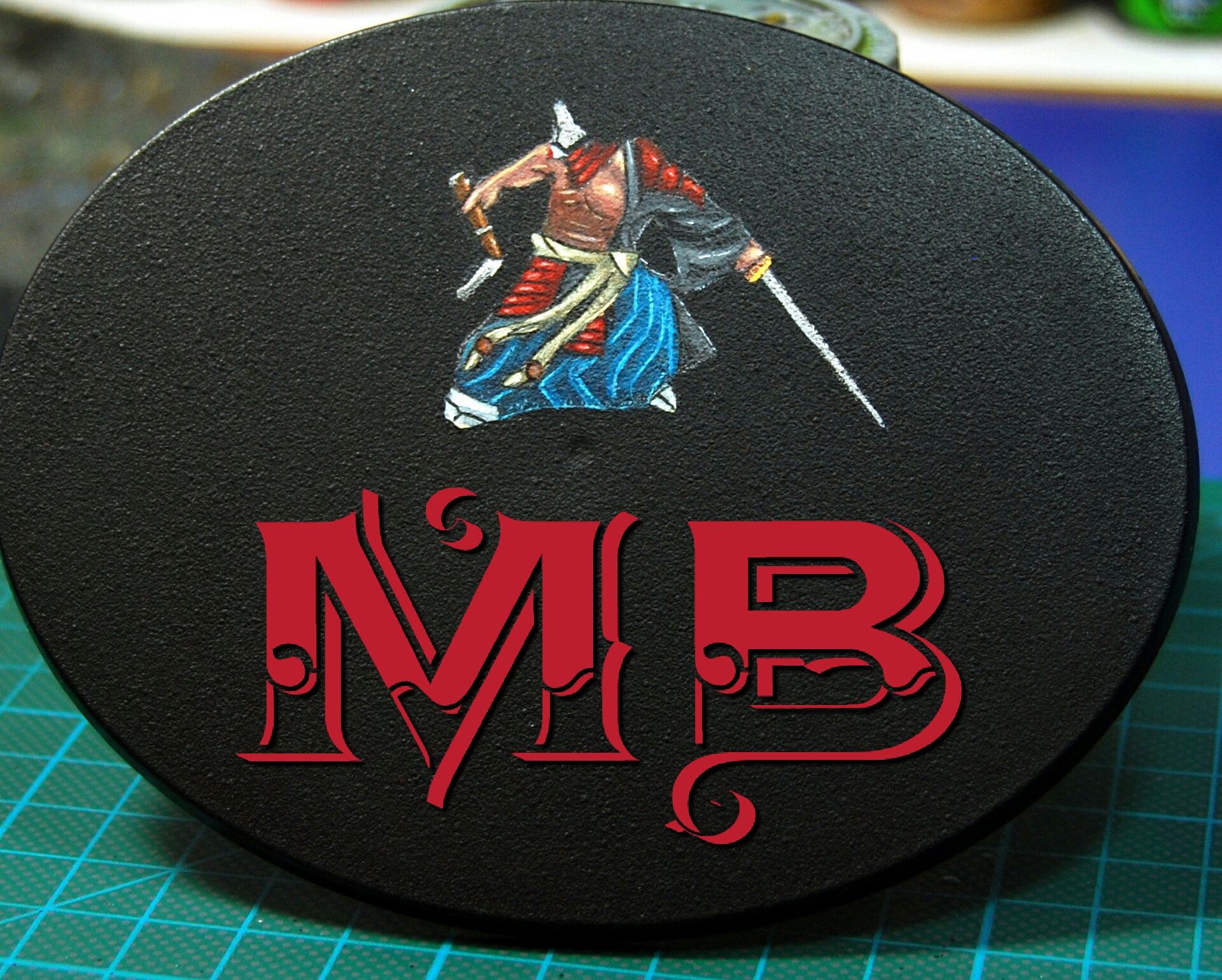 The rocky terrain I did with a piece of very dry wood, collected from the beach, in the photo you can see the paintings I used in each step, the last one that is not seen, it is a bone color. 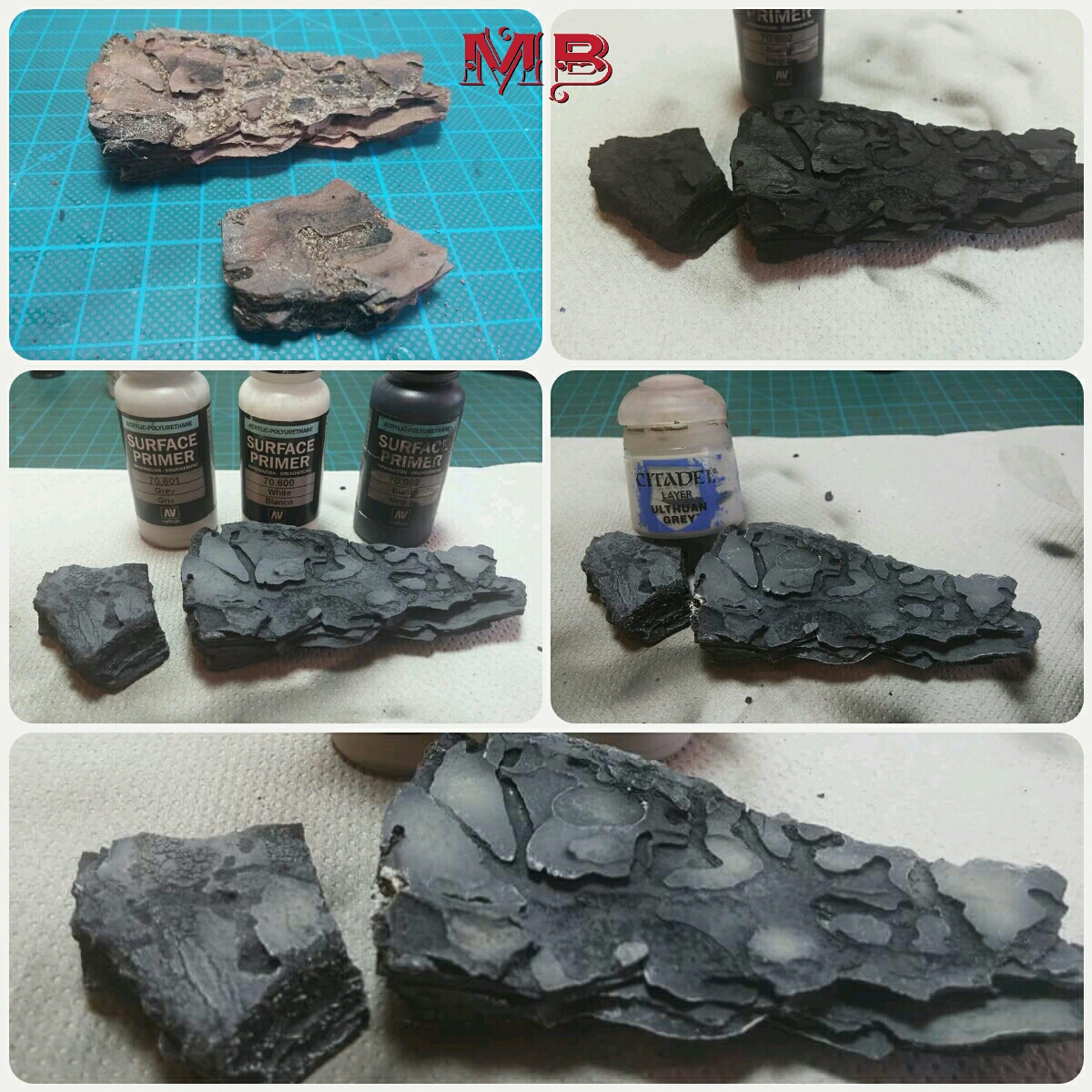 For the water I used the Tranquil Waters of Vallejo, it is a very easy to use product, although care must be taken not to spill it on the table. Also it is advisable to keep it covered until dry, so as to prevent dust and particles in the air settling on the surface. The area where the water hits the rocks can be done with any sculpture instrument or with an old brush. 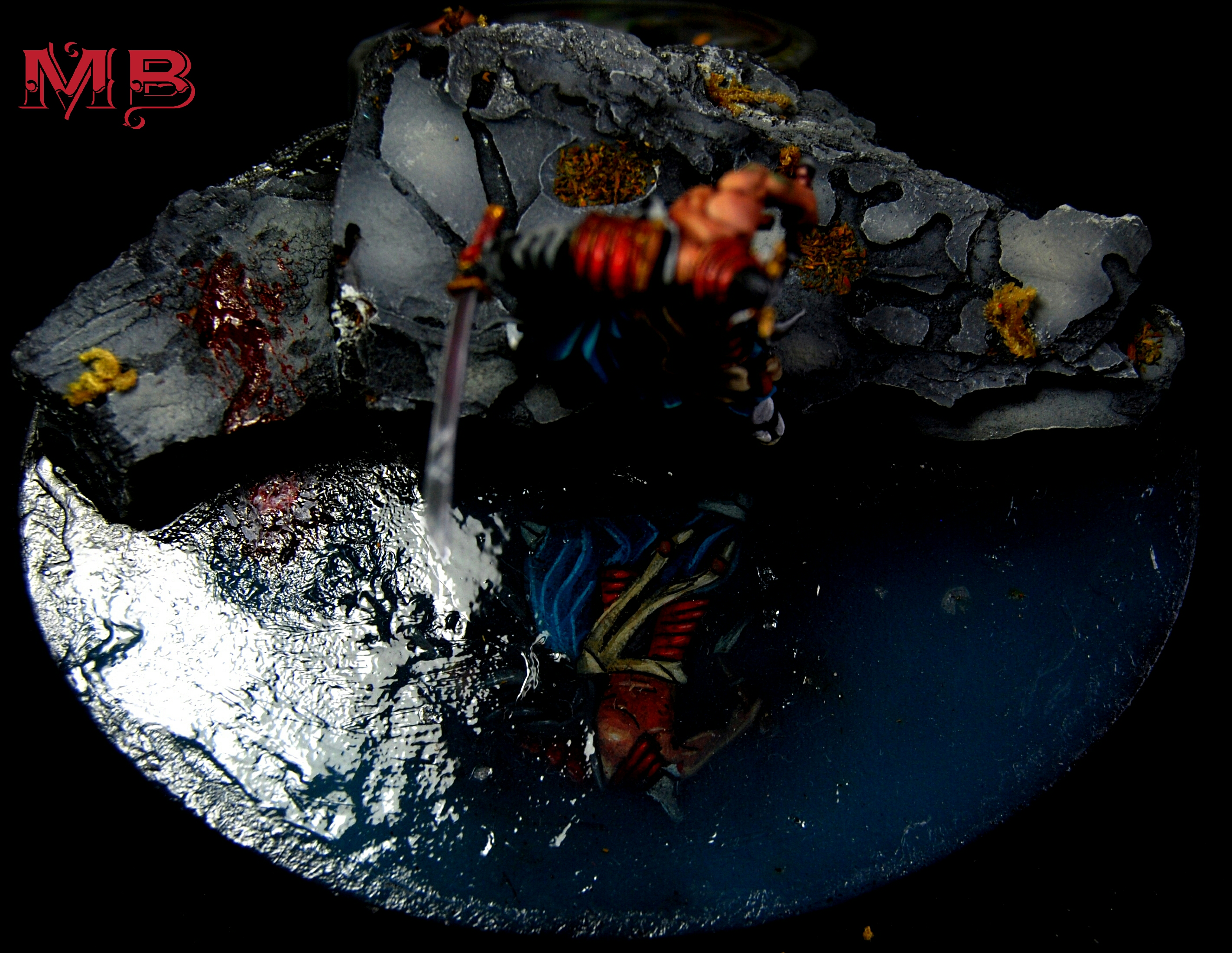 As in almost all my figures I use Vallejo’s black primer to airbrush, the rest is painted with the new Citadel range. I’m not happy with the result of the figure itself; each figure you paint improves the level for the next, especially for beginners like me. This figure is not up to the idea of ​​reflecting it in the water, but I hope to compensate soon with another similar reflection that I have in mind, but with a better figure finished. 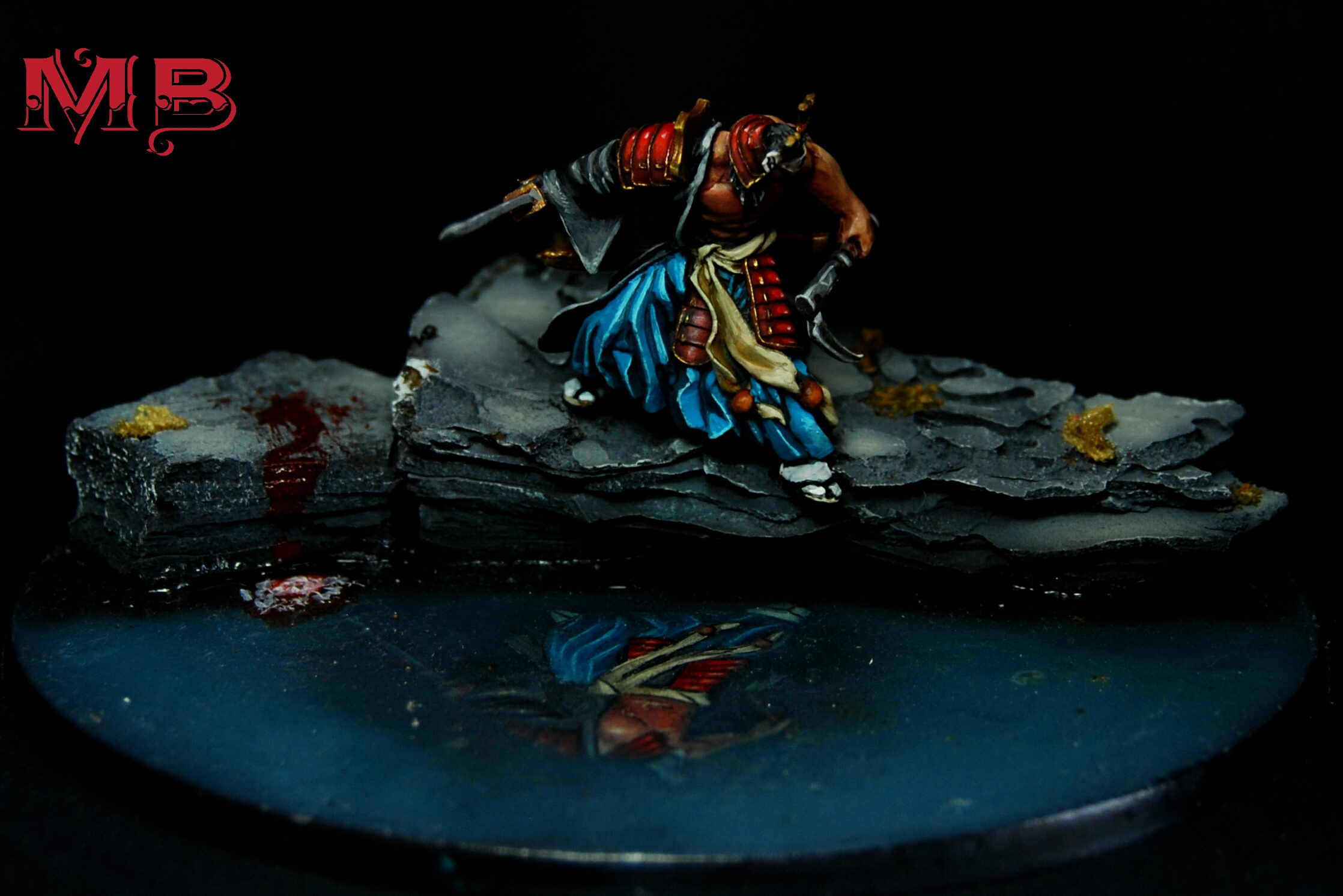 I hope you liked it!!! For me it has been a pleasure to write a review of “My Hiroki”, if you want more information about him or see some other of my works, you can contact me on my artistic page Miniaturas Batista: