I have known of Marc Mussat‘s work for some time and got to see his Ivan figure up close at Euromilitaire 2016. Marc is a painter of quite some renown, he lives in St Germain en Laye in France and is one of those quieter types within our hobby but has always spared time to talk to me about miniatures and painting, I knew I had to ask if he would shed some light on the process for creating the incredible patterns on the elaborate clothing of this figure. I was so excited when he said yes and even though this is a rather short article, it provides a really informative insight into one of our Arts’ greats! 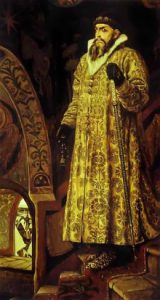 Ivan IV Vasilyevich (1530 – 1584), commonly known as Ivan the Terrible or Ivan the Fearsome , was the Grand Prince of Moscow from 1533 to 1547, then after a series of conquests became the “Tsar of All the Russias” until his death in 1584. Following his death this title was then acredited to all his successors.

During his reign, Russia conquered the Khanates of Kazan, Astrakhan and Sibir, creating a multi-ethnic and multi-continental state covering almost 1.6 million square miles.

Ivan exercised autocratic control over Russia’s hereditary nobility and to maintain control over his territories he created an administrative bureaucracy to oversee much of the technicalities. Russia was transformed from medieval state, almost barbaric in its’ nature into an Empire however, this was at grave cost to its’ populace and its’ stunted economy.

There are conflicting, disparate and eclectic historical accounts about his personality, one thing was for sure, he was a complex man, intelligent yet highly religious, a man of faith, an accomplished diplomat, popular with the commoners, yet for all of this many considered him mad, mentally unstable and paranoid with episodes of cruelty, in particular aimed at the Russian nobility.

It had also been recorded that one of his mental episodes resulted in the death of his son, Ivan Ivanovich, leaving his rather politically naive youngest son Feodor Ivanovich to inherit the throne.

His first wife Anastasia Romanovna died in 1560 and seriously affected Ivan, many consider this to be the catalyst for his mental deterioration. It was rumoured that her death was caused by poisoning and when one of his advisers defected and led the Lithuanian military forces, devastating the Russian region of  Velikiye Luki, it made Ivan paranoid and suspicious of nobility.

In 1564, following his return to the throne after a short term abdication, he created the oprichnina. The demands to the Boyar Council included that he had absolute control and had the power to execute traitors and to confiscate their lands and property. 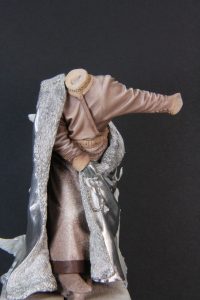 Old classics never go out of fashion and that is what I thought when I finally decided to start this 90mm classic sculpted by the incredibly talented Viktor Konnov for Pegaso a few years back. It is a fabulous figure, faultless with a beautifully sculpted face providing an insight into this complex, ruthless leader.

This was a challenge for me, as I usually paint 75 mm figures, making the accuracy of the freehand work crucial with such large areas to paint, the scope for errors and for them being seen by the viewer was greatly enhanced.

I had to find an idea for the huge ceremonial dress, one which was original and not attempted before. So I did some research in specialised books and on the web to find a suitable pattern for both the dress and the huge coat. Assembly proved problematic, due to the overall weight of the figure, therefore, I had to secure the heavy coat using epoxy putty. 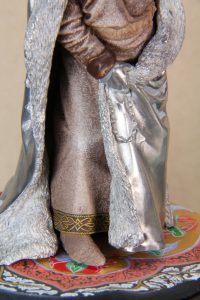 note the frieze pattern along the bottom trim

I started undercoating the dress with a mixture of Titanium White and Burnt Umber, taking special care in enlightening the areas I wanted to stand out most, and shading the areas close to the coat (see image above right).

After complete drying (72 hours) I could eventually start the freehand.
This was done using my best brush (not the smallest one, but the one with the best tip), using the same mixture, but being always a tone lighter than the base colour, so that the flower pattern could start to stand out . 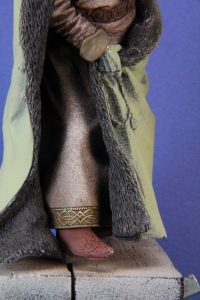 coat is attached and gaps filled

The bottom frieze was also painted before fixing the coat , which was still removable at that stage (see image above left).

Then I finally fixed the coat, and carefully sealed all of the visible joints, before undercoating the huge ceremonial dress (see image on right).

I chose a mixture of Persian Red, Cadmium Red medium lights were made with a mixture of Cadmium Orange and flesh tint, shadows were added using the base colour and Viridian Green (green being red’s complementary colour).

Then the fun part started… the pattern, in order to have a symmetrical pattern, I used a simple “point” technique. I make sure the points are correctly in line using a length of masking tape (see image below left). An appropriate template was made of a little plastic sheet and used to give the correct distance between the points. 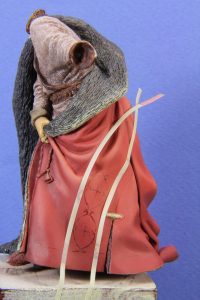 planning and preparation are key to a successful freehand

When my network of points seemed OK to the eye, I then could start building the pattern gradually, always using diluted burn umber.

The pattern must be painted on a very dry surface, so that small painting errors could be wiped off easily with white spirit, and rapidly dried with a nearby airbrush.

Once the pattern was drawn, I could start filling it in using Mars Yellow, Chrome Yellow and White (see bottom right image for the latter stage) Rather long and a bit tedious, but I was sure the result would be worth the effort. 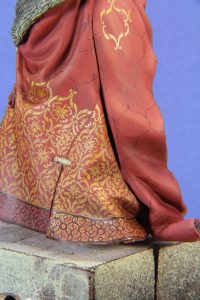 filling in the sketched out pattern

The face was also painted using oils (mixture of Light Red, Yellow Ochre, a touch of Cobalt Blue, Titanium White, Dark Purple and some Burnt Umber for the shadows ). Care was taken to have one side of the face lighter than the other due to the particular head position.

I changed the base at the last moment, as the previous one was too colourful for the figure. I opted for a black marble base, which in my opinion enhanced the figure in a much better way.

The figure was just finished in time for the oncoming Paris Show, and I was very happy to get my first gold medal in a renowned show. This figure was also rewarded by a gold medal at the 2016 Euromilitaire to my greatest satisfaction.

>Enjoy the gallery below and I hope you all found this reasonably interesting, thanks for reading, I would also like to thank Jay for giving me the opportunity to contribute something to this great site. I think it will become a great resource for many figure painters and I know Jay has a lot of great plans going forward.