I really enjoyed writing the previous article on the Blacksun Barbarian for figurementors and I offered to produce another article whether they wanted it or not!

It was fortunate that I was in the process of producing an entry for the upcoming Golden Demon competition and with the subject matter in use, I had decided to produce a dynamic piece not only in the setting but in the opposing use of warm/cold colours. So I will be discussing the painting but with a slant of why the colours are placed in opposition to produce a highly contrasting piece which supports the narrative of the duel. 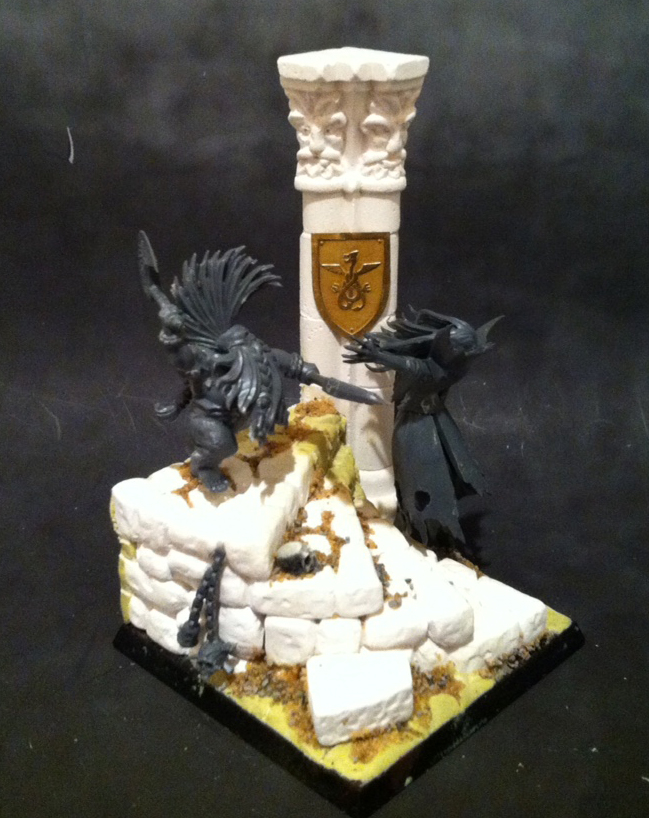 mock up of the composition

Colour contrast can be a super effective way of adding a striking visual interest to an already dynamic piece. With this duel I picked an iconic Dwarf Slayer leaping to attack.  As he was facing down, I wanted him in opposition with a figure reaching up, so I chose the banshee. This was not a normal combination of characters so I wanted to produce a story behind this explaining the confrontation.

Basically, a dungeon delving, treasure-seeking dwarf plumbing the depths of a chaos corrupted castle is attacked by an undead, former resident. This set the scene for the base. I wanted height and visual clues that would hint to a castle or stronghold setting, so the use of a staircase sprang to mind. Then to add a pivot, I used the pillar to tie it together. The shield was swapped out later following great advice from Lee (10 ball of CMON). I built and placed the diorama together before spraying with a base coat of Chaos Black primer.

He is going to be hotter than a vindaloo. It’s all about red and orange and yellow here on in for him, even the shading is going to have some warm colours in there. I want it in complete contrast to the Banshee.

Having removed the dwarf from the dio, I started on the skin and hair. The skin is my normal recipe using the excellent scale 75 paint set. As I described in my previous article on the Blacksun Barbarian, they are very good but awkward to use. 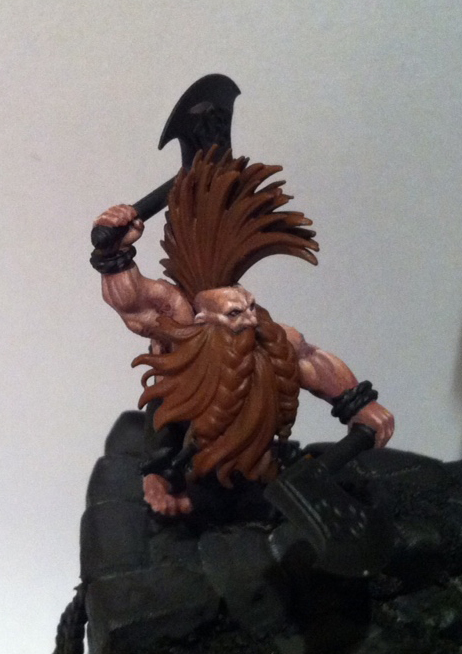 early beginnings for the dwarf

With this being quite a small miniature, the number of layers is reduced as there is just not the surface area for lots. Also, the use of glazing back in with a mid-tone is a must here as you end up getting quite stark transitions with small numbers of layers. This is best done lightly and after the glazing of the blues and reds into the skin, as it lightens the tone. 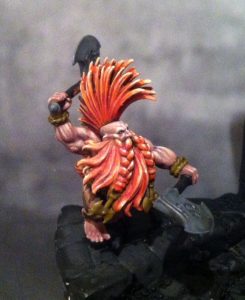 pushing the contrast in small scale

Red is a horrible colour to get right and all sorts of techniques are needed to prevent it turning into bubble gum pink. It’s all about brightness and colour contrast here to produce highlights and shadows.

The sparing use of white in red and using more yellows instead alongside the white helps a lot. Also think blues and purples and green for shading. But the main trick is shading down where possible rather than highlighting up.

I frequently use out of production paints as some of them are old and trusted friends in my paint collection.  As it is unlikely that you will have the same paints I have, here is a conversion chart for you from Dakkadakka, which is brilliant.

GLAZING ON THE SKIN

I have a set way of glazing the skin which was the same for the barbarian. I have just used again here basically a bunch of reds in the mid-section, blues in the shadows and yellows on the top regions like so. 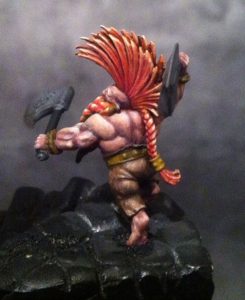 I was going to do the trousers in a striped look with a rip, but in the end I decided to go with a textured brown leather look instead as it was just too wow and detracting from the other sections. To get the textured look it is just stippling. With small minis like this it is all about light placement and not jumping too quick across the shades. Thin your paint down and work your way up slowly. It brings out the depth when you do that and it is very important for achieving the correct textured look.

Onto my favourite bit of any miniature, the metals! I am of the opinion that NMM is the one true way to paint metals and especially with small minis (ducks for cover as I just started a TMM vs NMM war). Gold is essential for the slayer as it is a nice warm colour which supports the other very warm colours on the dwarf.

The axes need to look super sharp and well looked after, so a very shiny high contrast approach here is required. The blades will look sharper with a striation approach to the placing of the light on the blade and plenty of edge highlighting to emphasise the crisp well forged edges.

In addition, the design of the dragon on the blade needs to be treated as a jewel, so dark next to brightest highlight working back to bright again as you move away from the brightest glint.

I have gone in depth in my previous article on NMM, so I won’t belabour the section.  Follow the same guidelines as set out there. I will still put the paint recipe here though.

Onto the glazes on the metal which are the same again as I previously used. 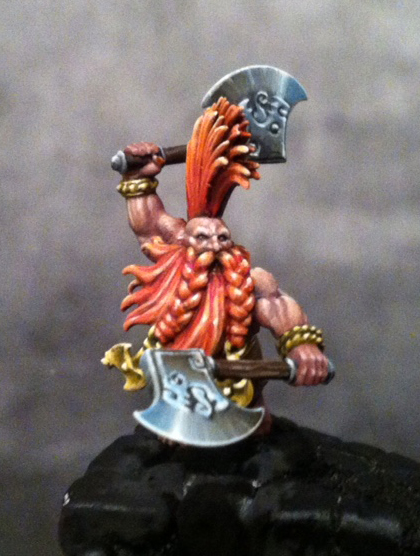 Gold is a very simple mix indeed, you just need to have the same approach as the steel so treat it like a jewel again. Here is the mix:

Now the opposing antagonist, the banshee! As the Dwarf was light and fire and life, all reds and golds, the banshee is death and cold and darkness. Therefore, opposing cold colours are used.

Colour contrast is such an important tool. I will talk a little here about warm and cold colours. The main crux is that certain tints are warm, so for example yellow and red and orange are warm colours. If you want a cheery healthy glow, then glaze with these colours or use them in the mix.

Now, in opposition to this certain colours are cold, so blue and white and grey are cold colours. Yet again, use them as glazes or in the mix to produce a cold feel.

Other colours can be warm or cold upon the addition of either warm or cold colours to them. So, for example, you can have a very cold green by adding white and blue into it (brrrrrrr, freezing). The same base green can be made warm by adding yellow to it (ahhh, warm summer grass).

On top of this, for shading it is always good to use an opposing colour on the colour wheel rather than just toning down with black.

This gets a bit complex as you will see.  As the opposite of green, for example, is red, so you would normally shade green with red.  But, and here’s the thing, if the green is a cold green then you need to be a little sneaky with the shading because otherwise you will be shading a cold colour with a warm one which is the route to madness I say! …….Though to be honest I do that sometimes and it can, in some circumstances, work but let’s not go there just yet. 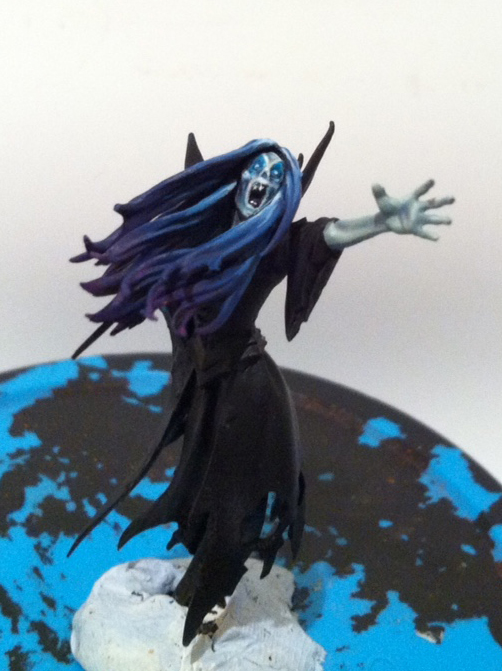 With the skin, and indeed the whole banshee, I wanted a cold opposing colour scheme from the dwarf.  Whereas he has lots of red, I wanted cold blues and opposing colour green. So the skin is a pale cold green shaded with blue here, so lots of pastel aqua colours and cool blue with off white highlights.  Also, as the banshee is female, the blending has to be as smooth as you can make it. As an aside, the female form when painted right really shows the skill of a painter on the blends.  There is little room for error, whereas the male craggy musular body can hide a multitude of sins and still look boss. 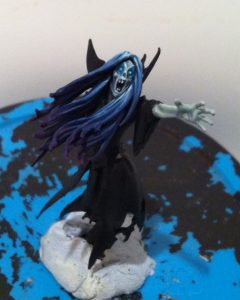 Notice how there is only a small amount of red in the shadows at the last possible shading and only in the deepest bits, got to keep it cold.

Hair is a large part of the dynamic of this mini. I have gone for blue with the hair, opposing the red of the dwarf. I have heavily highlighted it towards the scalp, to draw focus to this area, and then shaded it heavily to the ends. The shading has been done with purple, not so much to have an opposing colour (red in the blue to produce purple) but more to produce an electric magical effect. 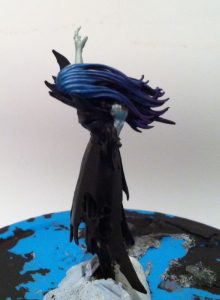 painting hair correctly can be tricky

The clothes are very similar to the approach used on the hair except there is more green in the mix.

Exactly the same technique and paint mix as with the dwarf steel and gold.

The shield was swapped out after some good advice from 10Ball of CMON fame and it is there to tie the two protagonists together. The colours reflect the different colours of the two minis. The side closer to the Dwarf, reds and oranges, and while blues and green are closer to the banshee.

Not only that, but the eyes are looking in both directions. Also it’s totally cool so it had to go in. It was quite a long process tying the two disparate colours together glazing back and forth to get a smooth transition. Effectively the colour combinations are exactly the same as the dwarf’s hair and the banshee’s clothes, so I won’t belabour the point by re-doing them. 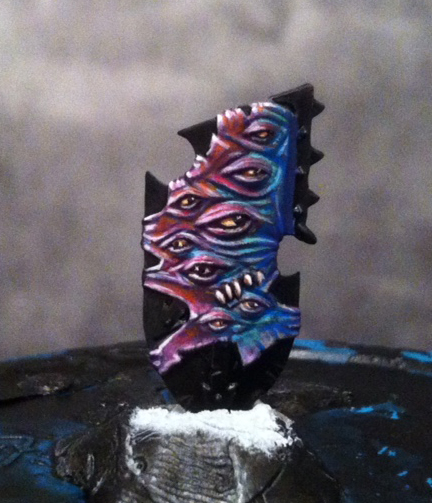 the shield helps to tie the elements together

The base was a very frustrating process, I must have painted it three or four times before I was happy. I started off with a dark brown “orange” glazed stone work which worked well for the dwarf but not for the Banshee. I then went blue green for the win on the Banshee but not successful for the dwarf. So, in the end, I ended up having a mix of grey brown near the dwarf and blue green near the Banshee. The technique was started with dry brushing and edge highlighting and then pulling glazes to the shadow regions. 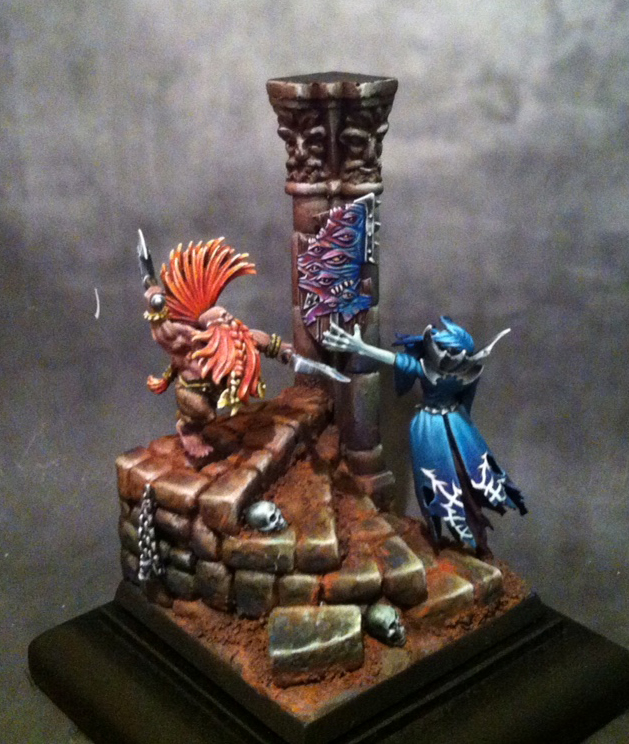 This was topped off with a couple of obligatory skulls and chains (same recipe as before for the steel).

Something was missing… railings! OO gauge laser cut fantastic stuff painted the same as the other steel and then liberally doused in dark brown and dark orange/brown washes to simulate rust. Voila! All done! All in all about 25-30 hours of work.

I have really enjoyed doing the article for FigureMentors and I hope that it is of use to you all.

Quick plug again for Euro Miniature Expo be there or be square!